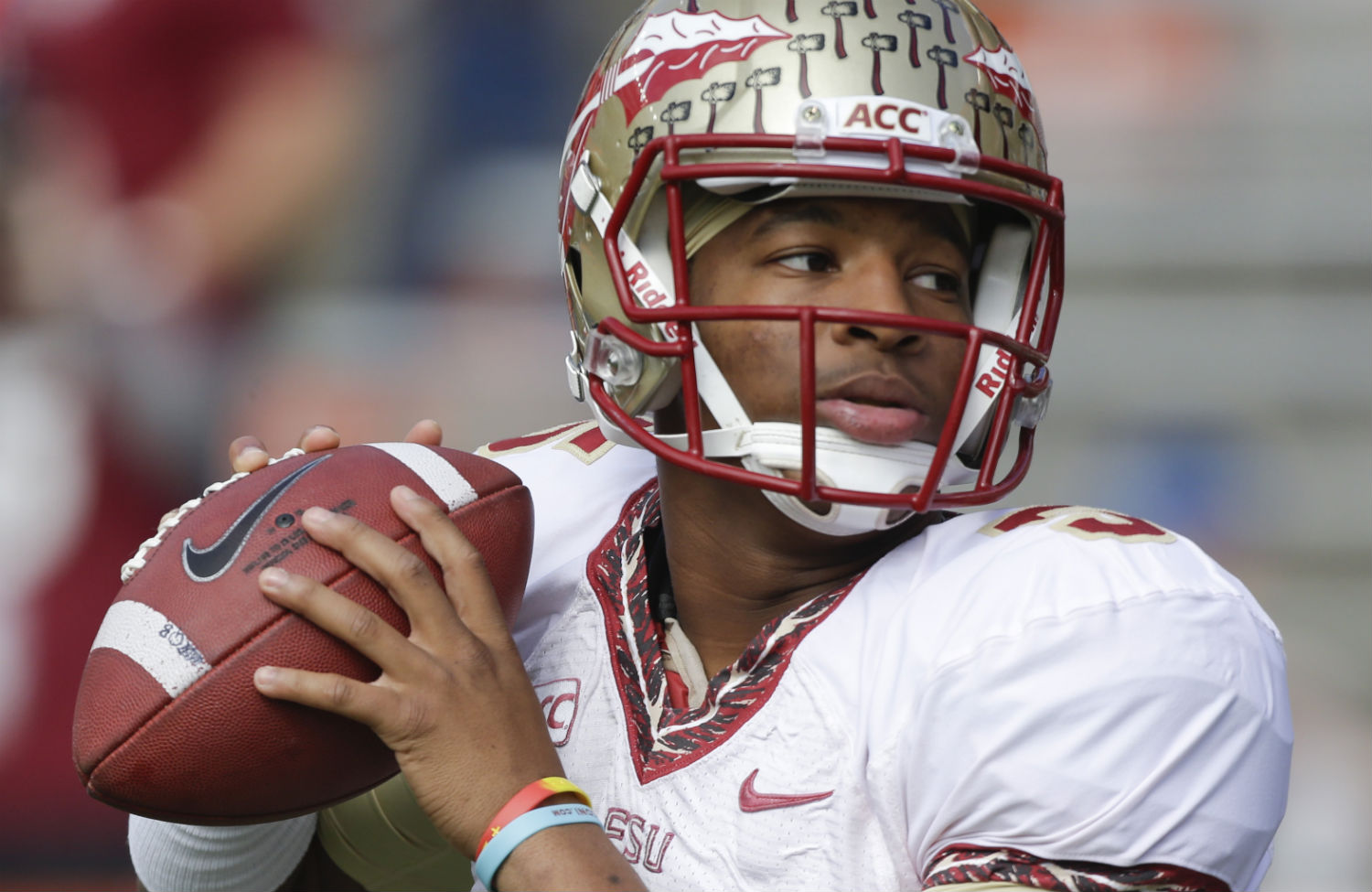 There are only two conclusions one can draw about Florida State football star quarterback Jameis Winston. Either he is a remarkable athlete who has little comprehension of the world beyond the huddle and hired the most callous attorneys on the planet to beat a sexual assault charge. Or he is a remarkable athlete who carries a deeply embittered streak of misogyny. Jameis Winston is currently facing a Florida State code of conduct hearing over charges of sexual assault. These same allegations were deemed to be without merit by the state’s attorney, although the initial investigation by Tallahassee police was so shady it was worthy of its own New York Times exposé.

Yet whether Winston is guilty or innocent, nothing excuses the testimony—published in USA Today—that the quarterback submitted to the code of conduct hearing this week. In his own defense, the Heisman winner writes, “The only thing as vicious as rape is falsely accusing someone of rape.” Read Daniel Roberts for a searing statistical breakdown for how gobsmackingly ridiculous such a statement actually is. The chances of being falsely accused of rape are about as likely as being struck by lightning: one in 2 million. Meanwhile, 25 percent of women on campus say they have survived a sexual assault. Also, as Roberts writes, many high-profile athletes have survived and even thrived after sexual assault accusations and convictions. Meanwhile, actual survivors of sexual assault are often treated like they deserve any pain that lingers.

The statement also repeatedly, over and over again, names the alleged survivor of the assault. Her name is redacted in USA Today because naming accusers of sexual violence is a way of humiliating and “slut-shaming” them into silence, although, thanks to Winston and his attorneys, it is now just a Google search away. And speaking of “slut-shaming”: Winston’s statement is also a calculatingly explicit indictment of a young woman who was a willing partner in a variety of sexual adventures and then—for reasons Winston chalks up to anger over the way his door kept swinging open to his peeping friends—decided to upturn her life and make these accusations.

It is impossible to write about this story and not reflect on the national wave of protests taking place against the police terror inflicted primarily on young black men. As stories of unequal and deadly treatment by cops flood into social media, here is Jameis Winston actually being protected by the Tallahassee police, his college small-town-god status giving him benefits that the late Eric Garner, Michael Brown or Tamir Rice could not imagine. But while Winston might be sheltered and protected, do not think for a moment that it springs from the post-racial hearts of the powers-that-be in Tallahassee. What you see in Florida’s state capital is the “gutter economy” that secretly runs NCAA sports.

Jameis Winston and his 25-0 record as a Florida State quarterback is not a human being to the cops and administrators and coaching staff of Florida State. If he is any species of mammal at all to them, it is that of the cash cow. He feeds his coach Jimbo Fisher, who got a new $4.1 million annual salary, making him the highest-paid public employee in the state. He feeds the local Chamber of Commerce, pumping $10 million into the local economy for each high-profile home game. He feeds the hotel and restaurant owners to the kids selling bottles of water on the side of the road for tailgaters. He feeds the ten-figure trough of television money that is going into the inaugural college football playoffs. He even feeds the Tallahassee police who are paid directly by an organization called Seminole Boosters to provide security on Game Day. In fact, according to The Boston Globe, three of the officers in the Winston investigation were seeking work with the Seminole Boosters. Of course, Jameis Winston does not see a dime. He is paid in protection and privilege, guilty or innocent. His humanity morphs and he becomes a new creature: something near-mythological best described as half god/half chattel. That’s the gutter economy at work. The relationship has disturbing similarities to the ones outlined by William Rhoden in his book Forty Million Dollar Slaves, about the ways that the enslaved stars of plantation sports were given tastes of luxury that others in bondage could not imagine. No, I am not arguing that college athletes are slaves. But as civil rights historian Taylor Branch has written, the business certainly does have “more than a whiff of the plantation.” In other words, the power relationships that defined 350 years of black existence in this country can certainly change. But especially when profits loom, they can also mutate like a virus, adapting and taking different forms to meet a new set of masters.

The Winston case stirs strong emotions because it brings together two of the ugliest strains of Americana: the history of false accusations of rape leveled against black men; and the systematic—and deadly—slandering of women who dare accuse men of sexual assault. The one thing Jameis Winston and his lawyers have true control over is how he presents himself through this process. His failure in this regard is total.