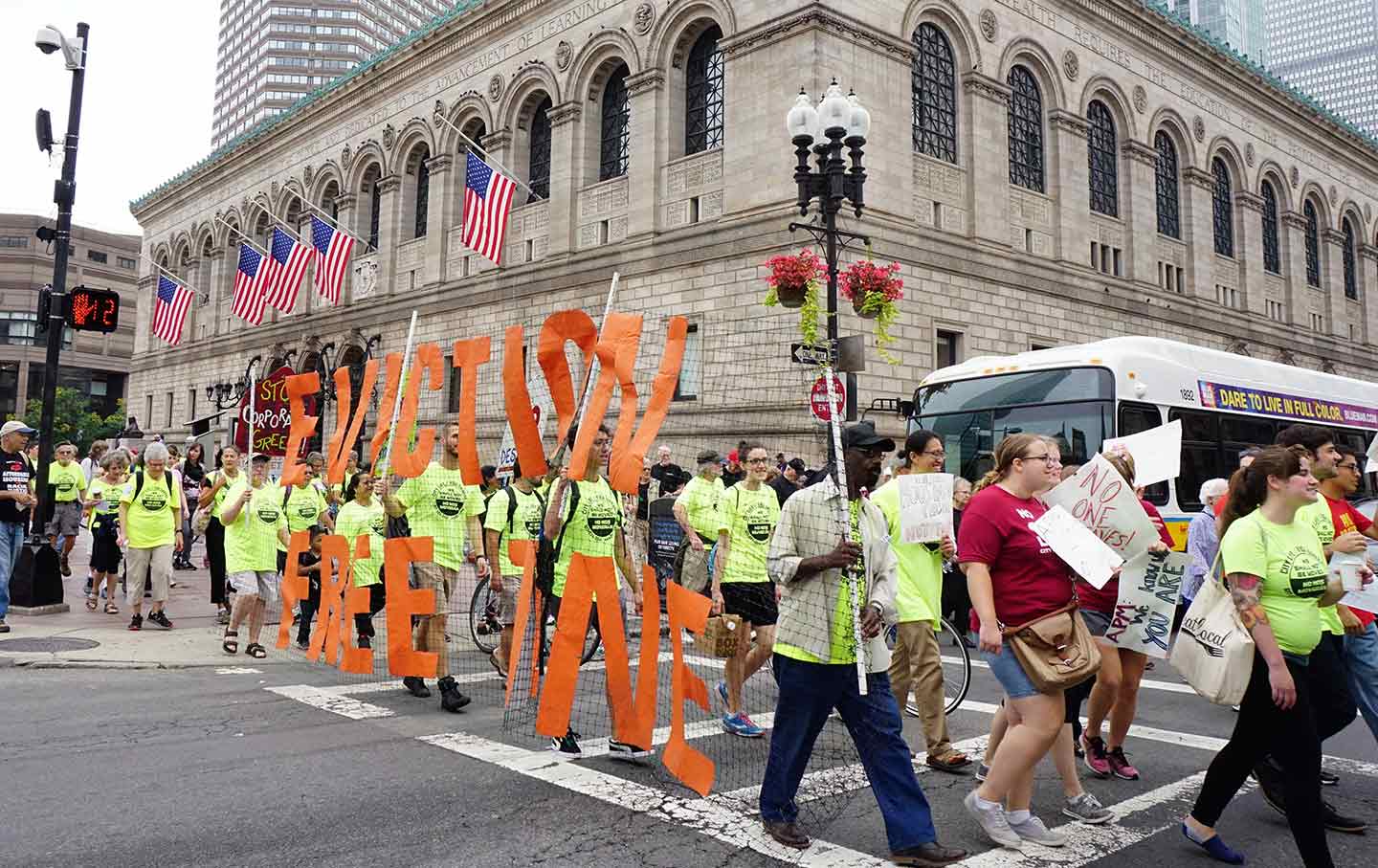 A march during Boston’s Renters Week of Action in 2017. (Lisa Thompson)

The United States today is in the grip of a devastating affordable-housing crisis. We hear about soaring home prices in the booming coastal cities and gentrification in newly hip towns, but the problem we face is much broader: All across the country, people are scraping and scrambling for one of the most basic requirements of life—a home. This fact rarely cracks the news cycle, and even the most progressive potential contenders in the 2020 presidential election fail to mention it. But travel to any big West Coast city or small Northeastern one, to the growing exurbs or far-flung rural counties, and the evidence begins to mount like clues at a crime scene.1

The Deep, Uniquely American Roots of Our Affordable-Housing Crisis

To illuminate the contours of this crisis—to mark it as a crisis demanding both outrage and action—The Nation has dedicated this special issue to what one activist calls the “housing catastrophe.” In the first of the two articles, Bryce Covert delves deep into the history of affordable-housing programs in this country in search of an explanation. What she finds is a stubborn (and fundamentally American) belief: that housing is a commodity, not a right. This notion has long held our country back from a forceful commitment to universal, noncommercial housing—and as the ideological balance has tipped decisively toward market-oriented solutions, the patchwork of government programs that sustain public housing has become increasingly frayed.3

Even so, hope is not entirely dead. As Jimmy Tobias writes in the second feature in this issue, the housing crisis has spawned the first rousing signs of a movement. This movement has found its fullest expression to date in the campaigns for rent regulation in San Diego, Chicago, Nashville, and a host of other cities. But what makes it unusual—even thrilling—is that the activists leading the charge see rent regulation as just the first step. They share a more expansive vision, one that wastes little time on the public-private half-measures that pass for solutions today—among them, inclusionary zoning and the low-income housing tax credit—and instead recognizes the vital role that government and other noncommercial actors have to play in fostering big, creative solutions. The focus of their vision can be summed up in three words: “homes for all.”4

If that sounds utopian, it is. And yet, from marriage equality to marijuana legalization, free higher education to the Fight for $15, the political landscape is filled with examples of sweeping demands that have migrated from the periphery of possibility toward acceptance, embrace, and even, on occasion, actuality. What they’ve all had in common are movements and, as those movements gained strength, political champions.5

With the rise of rent-regulation campaigns—and the nascent call for “homes for all”—the affordable-housing crisis is finally getting its movement. Now it’s time for progressive leaders to join the effort, both to call attention to the crisis and to fight for the solutions we really need. This is both good policy and good politics. With millions of Americans struggling to pay the rent, and with key members of the progressive base—including African Americans, Latinos, and millennials—among those struggling renters, progressive politicians can no longer justify sitting on the sidelines. Indeed, they might find that voters respond to their outrage over such a widespread and shameful crisis. As Tara Raghuveer, housing-campaign director at People’s Action, told Tobias, “Housing is the biggest tent issue there is. People are obsessed with housing.”6