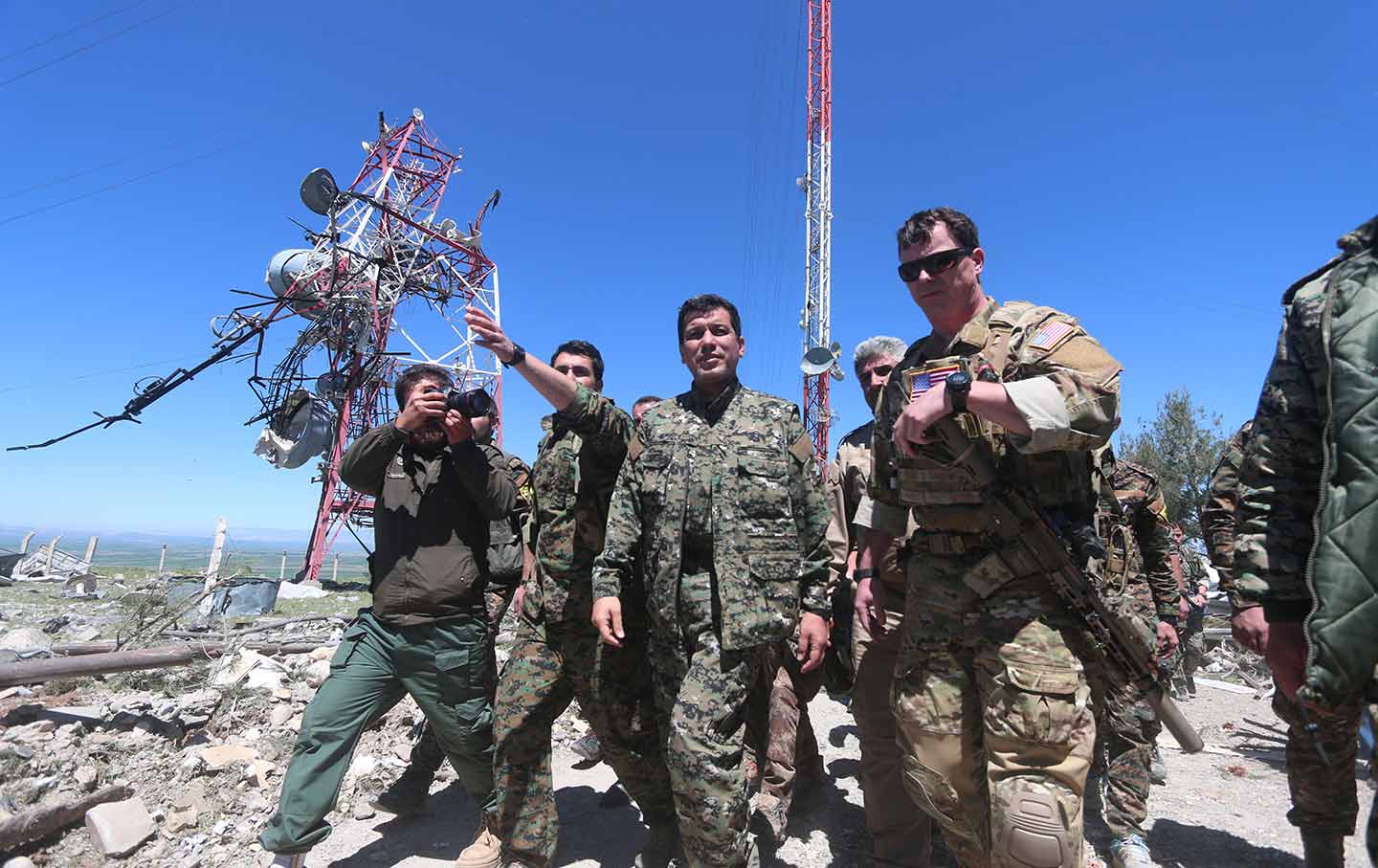 A US military commander walks with a commander from the YPG as they inspect the damage at YPG headquarters after it was hit by Turkish airstrikes near Malikiya, Syria, April 25, 2017. (Reuters / Rodi Said)

The Trump administration was unusually subdued this week after the Turkish air force launched a bombing campaign against facilities of the Kurdish People’s Protection Units (YPG) in northern Syria. The State Department said it “asked” Turkey to stop killing US allies in the fight against ISIL (ISIS, or the Islamic State). The Pentagon complained that Turkey not only hit its allies but failed to coordinate with the US Air Force, which is flying in the area. In essence, Turkey acted as a hostile power against the US war effort. In the aftermath, a fierce firefight has broken out at the Syrian-Turkish border between YPG forces and Turkish army units operating in northern Syria.1

The YPG personnel are close allies of the United States in the fight against ISIL in northeast Syria. On coming to power, President Trump increased the number of US troops embedded among them to some 500. Just this week he gave the Defense Department under Jim Mattis the authority to make further determinations about needed troop levels in Syria and Iraq.2

Where did the YPG come from? In 2003, during a brief political opening some called the “Damascus Spring,” President Bashar al-Assad allowed the formation of some political parties and seated them in the otherwise tightly controlled Baath-dominated Parliament. One was the leftist Democratic Union Party (PYD), representing many of the some 10 percent of Syrians who are Kurdish. The new party, however, quickly fell out with Damascus and was suppressed. After the outbreak of civil war in Syria in 2011, the PYD’s paramilitary, the YPG, emerged as a significant fighting force, warding off fundamentalist Sunni Arab militias and establishing a semi-autonomous Kurdish region in Syria, which locals call Rojava.3

When ISIL attacked Kobane, a Kurdish town on the border with Turkey, in September 2014, the YPG swung into action and ultimately secured US air support, allowing the militia to lift the siege and begin pushing back ISIL, which has committed several major massacres of Kurds. In the aftermath, then–Secretary of Defense Ash Carter decided that the YPG was the only ground force willing and able to take on the minions of faux “Caliph” Abu Bakr al-Baghdadi in his capital of Raqqa, immediately to the south of the Kurdish region. Because it looked bad for the United States to be helping leftist Kurds sweeping into a conservative Sunni Arab town like Raqqa, Carter tried to find Arab allies for the YPG, which led to the formation of the Syrian Democratic Forces. It appears, however, that the number of Arab fighters in the SDF has been inflated, and its core is the Kurdish YPG. 4

Carter’s YPG strategy ran smack into a regional complication. Turkey declared the People’s Protection Units a fellow traveler of the far-left Kurdistan Workers’ Party (PKK), which had launched a separatist guerrilla insurgency in Turkey’s southeast in the 1980s. Ankara and Washington agree that the PKK is a terrorist organization, but the Obama and Trump administrations have insisted that the YPG is not.5

Turkish President Recep Tayyip Erdogan pulled out of longstanding negotiations with the PKK and went to war against it in the summer of 2015. The PKK had attacked 113 Turkish police and military personnel that summer, but many observers consider Erdogan’s response disproportionate. Some suspect that he deliberately sought to polarize Turkish society over the question of Kurdish political identity because of the rise of a center-left, multicultural pro-Kurdish party, the People’s Democratic Party (HDP), which had taken votes away from his own center-right Justice and Development Party (AKP) in the June 2015 elections.6

Erdogan saw the center-left, secular-minded HDP, which got 13 percent of seats in parliament then and reduced his own party to a little over 40 percent, as a dire threat to his plans to move Turkey to a pro-Islam presidential dictatorship. He gradually managed to tag the HDP as terrorist sympathizers, and one of its leaders was thrown out of parliament and sentenced to five years in prison for having praised the 2013 peace negotiations with the PKK.7

Washington has been deeply frustrated by Turkey’s unwillingness to devote significant resources to rolling up ISIL. Erdogan’s priority has been attempting to destroy the PKK, and attacking what he sees as its Syrian Kurdish allies. Ankara fears that for the sake of defeating al-Baghdadi in Raqqa, the United States is helping to create an autonomous Syrian Kurdistan, which in turn may act as a model for Turkish Kurds, some 20 percent of the population of Turkey. In fact, separatist sentiments are not very widespread among Turkish Kurds, though economic discontent over government neglect of the hardscrabble southeast is. Erdogan has displaced some 350,000 Kurds with his current campaign, however, and is polarizing his country on several fronts at once.8

Now Turkey is more or less at war with the United States in northern Syria, inasmuch as its bombing of the YPG could easily hit US Special Forces embedded with them. Likewise, the possibility of an aerial dogfight between the US Air Force and its Turkish counterpart cannot be ruled out. The United States cannot hope to retain credibility as a battlefield ally of YPG fighters risking all to take on ISIL if it cannot even protect them from a NATO member like Turkey. Erdogan appears to believe that he can bully Trump into abandoning the Syrian Kurds as allies. It remains to be seen if he has calculated correctly.