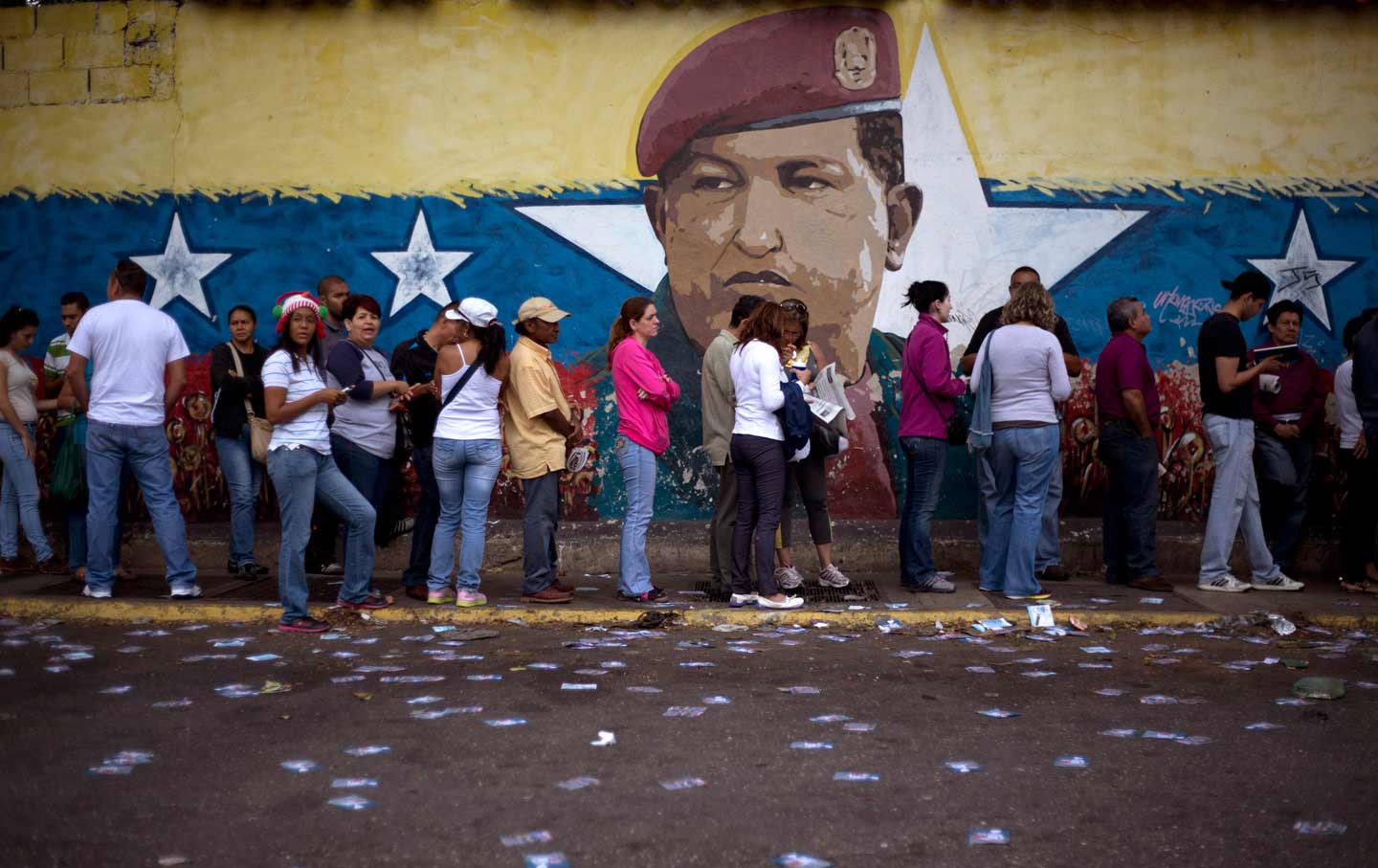 A mural of Venezuela’s late President Hugo Chávez decorates a wall outside a polling station where voters wait to enter during congressional elections in Caracas, Venezuela, on December 6, 2015. (AP Photo / Ariana Cubillos)

In defeat, legitimacy is bestowed. Since 1998, the political coalition assembled by Hugo Chávez has won over a dozen national elections—including a referendum to recall Chávez—by large margins. Over that time, national and international critics insisted that the voting had to be rigged, despite the fact that most serious observers, including the Carter Center, praised the national government for putting into place a nationalized, secure, easily audited, simple-to-use voting system (pretty much the exact opposite of the US kaleidoscope of locally controlled polls). In the run-up to yesterday’s vote, the US mainstream media was running multiple narratives: The opposition was going to win, but the government, because it controlled the voting, would rig the results; voting officials, in President Maduro’s pocket, would hold on to the results indefinitely, creating a state of high tension that might spiral into crisis; the government wouldn’t recognize the results and would declare a state of emergency. The opposition, so long accustomed to losing at the polls, was seeding stories in the US press saying the only way it could lose was through fraud, thus trying to pre-justify its rejection of the results and push for a putsch.

A high voter turnout yesterday, in generally calm elections, did flip the national assembly, giving the anti-Chavista coalition, the Democratic Unity Roundtable, 99 seats—22 short of a supermajority in the 167-seat assembly—and the ruling socialist coalition, the Great Patriotic Pole, about 46. A few districts are still being counted, but national election authorities, reading the results from its state-of-the-art polling system, announced the result early. Maduro quickly responded with this incendiary remark: “We come to morally and ethically recognize the adverse results and to say to Venezuela that the constitution and democracy have won and that we accept the results reported by the electoral council.” He went on to praise Venezuela’s voting process: “A perfect electoral system, without a doubt is one the most marvelous creations of these 16 years of revolution, of transformations and the creation of something new.”

High crime, low oil prices, economic turmoil, and a bad mix of government high-handedness, incompetence, and corruption probably accounts for the shifted margin. Venezuela will now have Nicolás Maduro, the significantly less charismatic heir to Hugo Chávez, in the executive branch; a significant part of the judiciary loyal to Chavismo; and an assembly controlled by the forces that, since 2002, have bet on the Malcom X option—“any means necessary”—to reclaim their privileges and power. Now that the political realm will be stalemated (at least until the opposition assembly tries to recall Maduro), the main axis of conflict will shift to a confrontation between organized popular forces still committed to a bottom-up, radicalized vision of revolution (which, taking this vote as a baseline, might represent around 40 percent of the electorate) and the military, which (like all such institutions) comprises competing interests and ideas and could be tempted to broker impasses or step into vacuums of power.

Gabriel Hetland was in Venezuela for the vote and will be reporting the details. Keane Bhatt was also on the ground, already out with a comparison of how the US media covered Venezuela and the recent Haitian vote for Jacobin. Other journalists and scholars who might help make sense of what is to come are Alejandro Velasco (just out with a great book, Barrio Rising, a three-decade history of Chavismo before Chávez, which helps us understand why Chavismo, whatever the results of this election, isn’t going away), Sujatha Fernandes, George Ciccariello-Maher, Naomi Schiller, Mark Weisbrot (who has been telling the Venezuela government for some time now it had to fix its macro policies), Miguel Tinker Salas, and David Smilde. And look for Venezuela coverage from the North American Congress on Latin America (NACLA), which, after some time on the ropes, is back in print and online, under the editorship of Alejandro Velasco. Support!

Coming on the heels of the recent victory of Mauricio Macri in Argentina, and Dilma’s impending impeachment in Brazil, and low polls for Michelle Bachelet in Chile, the Latin American left—which, since Chávez’s first election in 1998, has witnessed a remarkable run—is in serious trouble. It is too early to know if we are moving into a new era of a restored right, one which uses the now widely accepted language of social democracy to undermine social democracy. (Ernesto Semán has a sharp analysis on what Macri’s victory might mean over at NACLA.)

There’s much at stake, for, in addition to having presided over a return of social-democratic redistribution, the South American left over the last decade and a half created an effective counterbalance to the United States, on issues such as trade, debt, rendition, torture, and war. Macri has already signaled that he would move away from trying to create an integrated regional market anchored by Brazil and Venezuela (that could negotiate better terms regarding the United States) and lock Argentina into the Washington-brokered Trans-Pacific Partnership.

As the Latin American left likes to say, the conjuncture is definitely fluid.