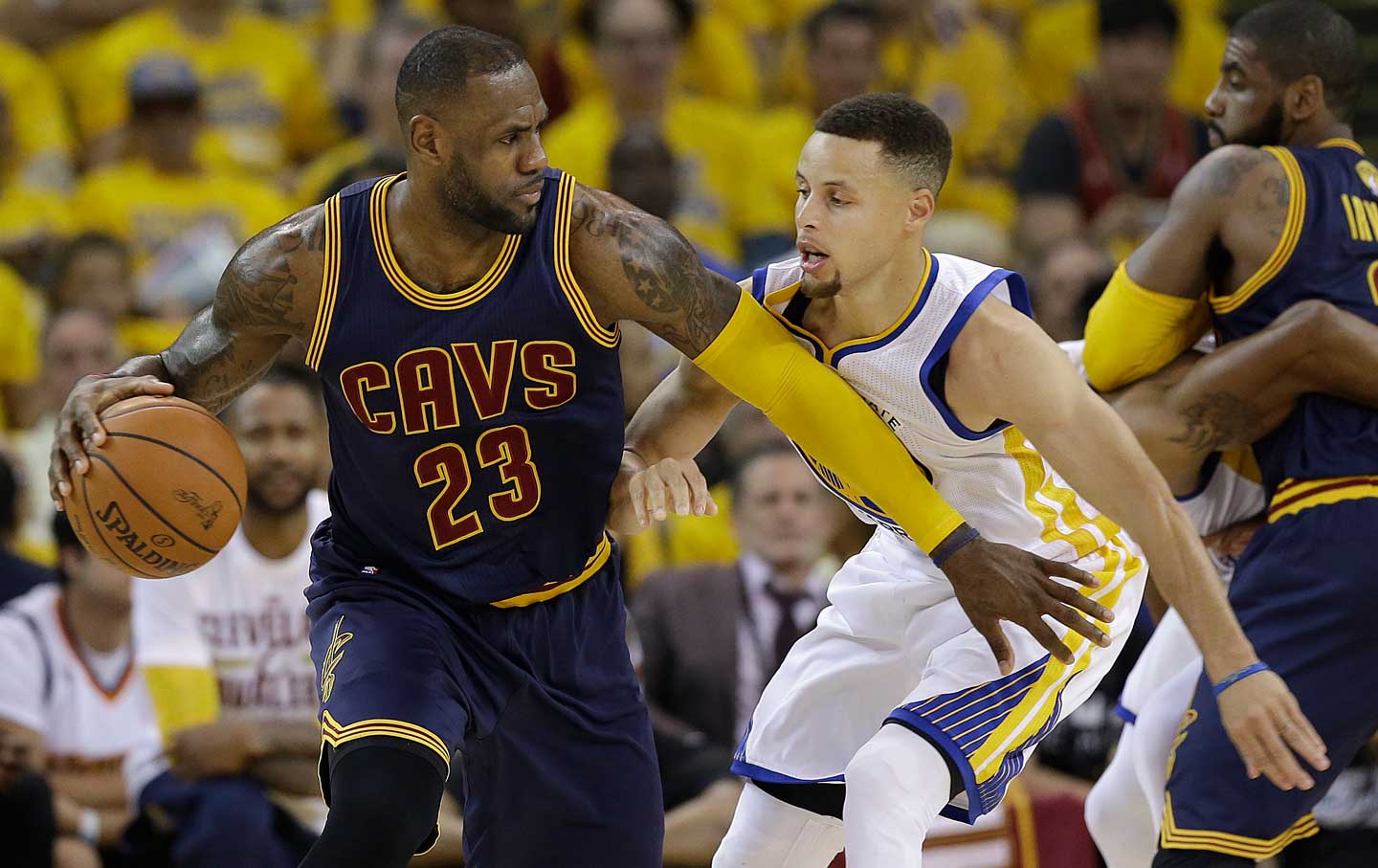 The 2016 NBA Finals are a showcase of the NBA’s two best teams as well as two of its most charismatic and recognizable athletes: Stephen Curry of the Warriors and Cleveland Cavalier LeBron James. LeBron and Curry seem to have little in common, other than their six combined MVP awards. One looks like Power Man, the other looks, as his coach Steve Kerr said, “like he’s 12 years old.” One can jump out of the building and struggles with a three-point shot. The other can shoot from outside the building and struggles to dunk. One provokes awe, the other adoration. But they do share a similarity beyond their massive commercial capital. Both have been unafraid to speak about political issues ranging from Black Lives Matter to gun violence, and both have thrown off the Michael Jordan mantra of “Republicans Buy Sneakers Too” by proudly aligning themselves with the current occupant of the White House, President Barack Obama.

Before it was of a fashion back in 2008, 22-year-old LeBron was wearing a Senator Barack Obama T-shirt into the arena. As for Steph Curry, he has spent so much time with President Obama on the golf course and in the White House over the last two years, you’d think he was a de facto part of the cabinet. The smart move by Hillary Clinton would be to aggressively try to get a campaign photo op with either of them, or at the very least try to find a way to shine in their reflective glow. Given the contrast that would show with Donald Trump’s athletic supporters, given that he has the support of some of the most odious people the sports world has ever spewed, would seem to be a political slam dunk. In addition, the NBA, by numerous metrics from league policies to political donations, is the most progressive and most liberal league in this country. Yet with Ohio a battleground state and California the home of a Democratic primary contest in less than a week, it wasn’t Hillary Clinton who found her way to raucous Oracle Arena in Oakland. It was Secretary Clinton’s opponent, Senator Bernie Sanders. It was Bernie, right after a 30,000-person rally in Oakland, who attended game seven of the Western Conference Finals with a San Francisco State alum named Danny Glover, by his side. Sanders then allied himself with the home team, tweeting, “Last week, Golden State was down three games to one. Tonight, they finished off a great comeback in California. I like comebacks.”

As the SF Gate reported breathlessly, “An against-all-odds presidential campaign collided with an against-all-odds NBA comeback.” Sanders then told reporters, “They turned it around, and that is what our campaign is going to do.”

It’s easy copy for the press and for a campaign with a pulse, a no-brainer. Standing with Steph Curry is like standing with Snoopy: a political-can’t-lose. This is not to say that Clinton has to throw on the nearest Warriors jersey in advance of the California primaries. An attendant slick move would be if Secretary Clinton stood with the Cleveland Cavaliers, an underdog going for the city’s first title in 52. Yet Clinton is so far sitting the NBA Finals out and the decision is a curious She has already received the endorsements of NBA legends Magic Johnson and Kareem Abdul Jabbar, the latter of whom wrote a fulsome op-ed explaining his reasons, both which provide her with an entry point to politics and basketball. She has also received money from Commissioner Adam Silver and several other owners and executives. But it isn’t happening, and the question is why.

Anytime we discuss how a female candidate can leverage the world of sports, the institutional barriers of sexism can and should be raised. We should ask whether navigating the high-testosterone world of the NBA would create issues for any woman attempting to become the first female president of the United States. But sexism alone doesn’t tell the story. NBA players last year elected a take-no-shit, tough-as-nails attorney named Michele Roberts as the executive director of their union. This is not to say sexism is absent from NBA circles—or anywhere—but it is to say that the terrain is one where female leadership is not a foreign concept.

Yet Hillary has not made this effort and NBA players are hardly going public with their support. I spoke with Etan Thomas, a 10-year NBA vet and author, with whom I co-host a weekly radio show. He talks politics with his former teammates on a regular basis and said to me that the uncertainty many feel about backing Hillary Clinton are not dissimilar from concerns that pollsters have been picking up upon for months, albeit with an edge that speaks to race.

“Guys who I have spoken question if she is honest. They all heard the Super Predators comment they all know about the crime bill her husband wore like a badge of honor. They all see that Hillary presents like a very established politician. But Senator Obama generated an excitement among NBA players that isn’t there for Secretary Clinton. This is not because of race—we weren’t rushing out to support Alan Keyes or Herman Cain—but because we wanted a change after Bush and didn’t want politics as usual…. NBA players aren’t different from how most voters under 30 see her campaign.”

Politicians have associated themselves with sports, as a way to connect with voters, since Andrew Johnson invited a baseball team to the White House in 1867. If Hillary Clinton isn’t feeling this NBA finals as an opportunity, it really does tell a story all its own: a story of a campaign that can’t get out of its own way.