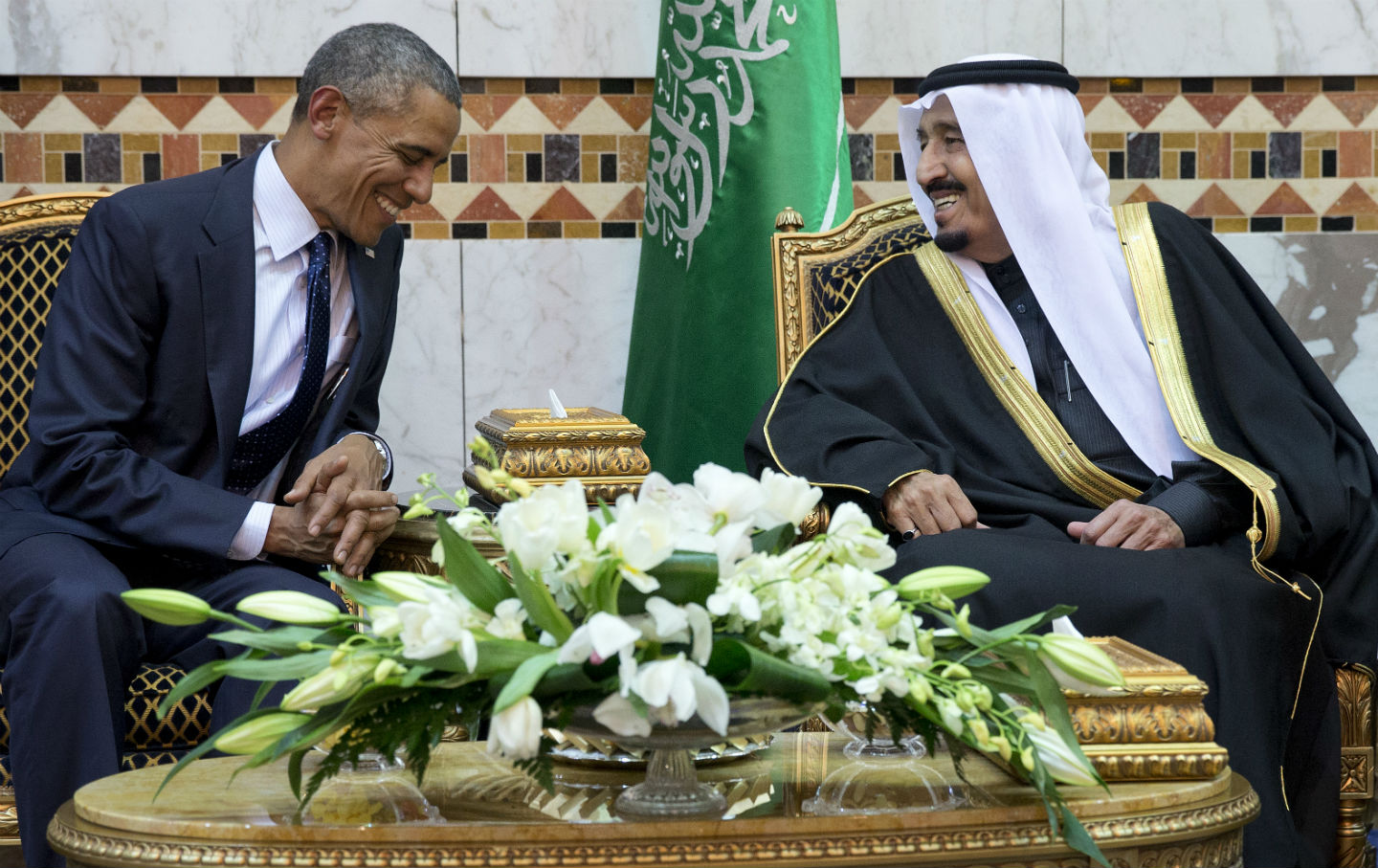 “The Iranians are coming!” That was the conviction widely and vehemently expressed by Arab intellectuals and activists at the Ninth Annual Al Jazeera Forum in Doha, Qatar, last week. Iranian diplomats were greeted with skepticism and hostility at the annual gathering of journalists, policy-makers, and media professionals from across the Arab world. There was widespread suspicion, moreover, that the United States is increasingly on the side of Iran.

That the views expressed by politicians and intellectuals at the forum are also widely held in Arab capitals was demonstrated this weekend when Saudi Arabia’s King Salman abruptly pulled out of President Barack Obama’s meeting with the Gulf Cooperation Council nations. It can only be speculated that Obama’s insistence on a rapprochement with Iran and increasing skittishness over the bombing of Yemen were behind that snub.

Al Jazeera has long had a reputation for giving a platform to various sides of an issue, and so it invited Kazem Sajjadpour, former Iranian ambassador to the United Nations and now adviser to the Iranian foreign minister, to give a keynote speech. Also presenting was Hassan Ahmadian, senior research fellow at the Center for Strategic Research in Iran, on a panel with Khalid Saleh, head of the Syrian National Coalition. Fireworks ensued. Sajjadpour admitted that Iran is an ascending regional power, but insisted that it is the solution to the region’s problems, not a problem in its own right. He pointed to Iran’s role in taking on ISIL in Iraq. He portrayed Tehran as uniquely indigenous in its sources of power and authority, a country that “produces its own security.” He implicitly slammed the Arab states for accepting an imperial, American security umbrella.

The Arab intellectuals were having none of it. Peace Prize Nobelist Tawakkol Karman of Yemen slammed the “mullahs” (i.e., clerics) of Iran for supporting the Houthi rebels in her country. She maintained that Yemen had had a political process and was moving toward new presidential and parliamentary elections when the Zaidi Shiite militia abruptly marched into the capital of Sana last September and threw the country into chaos, with Iranian support. (The Houthis have menaced Ms. Karman, who has been scathing in her criticism of their extensive human rights abuses.) Another Yemeni politician slammed Iran for “occupying” his country. Saudi Arabia has led a coalition of Gulf Cooperation Council states, along with Jordan and Morocco, in a bombing campaign against the Houthis and appears to be making preparations for some sort of land campaign. Iran has denounced the bombing as illegal aggression that has resulted in extensive casualties among noncombatants.

Security analyst Ahmadian pushed back. “You are making it sound,” he said, “as though the Houthis are foreigners. They are a Yemeni movement of local Arab people.” He rejected the idea of any Iranian “occupation.” (There is no good evidence for an Iranian military presence in Yemen, though Tehran may have sent some arms or funding to the Houthis, who hail from a different branch of Shiite Islam than the one common in Iran. The lion’s share of Houthi weaponry, however, is American and was simply captured from the collapsing Yemeni military.)

Syrian National Coalition spokesman Saleh then weighed in. He said that only a few years ago, young Syrian-Americans had objected to the US sanctions on Iran. Now, he said, since Iran was propping up the murderous Baath regime of President Bashar al-Assad in the face of a popular revolution, Syrian-Americans hoped for even harsher sanctions against Tehran.

The Arab figures fulminating against Iran seldom brought up the threat of ISIL or Al Qaeda in the region, the fight against which might have formed a basis for an alliance with Iran of threatened Sunni states like Jordan or Saudi Arabia. Indeed, the lack of concern about or focus on the militant “caliphate” of ISIL that has abruptly broken off large swaths of Syria and Iraq was a striking lacuna in the three days of the forum. Hemin Hawrami, head of the Kurdistan Democratic Party foreign relations office, brought up ISIL as a reason for which Iraq as a country is over with, hinting strongly that Iraqi Kurdistan would seek independence. The staunchly Arab nationalist audience did not visibly react to this announcement of the end of one of the modern Arab world’s central nationalist experiments.

The other major fireworks broke out when former Kuwait minister of state planning and development affairs, Rola Dashti, attacked the youth revolutions of 2011 and after as having been powerless to provide economic, social, or political development, and defended Egyptian President Abdel Fattah al-Sisi as having been freely and fairly elected and having restored order to that country. She was repeatedly interrupted from the floor by members of the Muslim Brotherhood in exile in Qatar (something the Al Jazeera officials deplored and tried to stop). The elected Muslim Brotherhood government of Mohamed Morsi was overthrown in the summer of 2013 by a combination of massive public demonstrations and then a military coup. The coup leader, Sisi, went on to arrange for himself to be elected president with 97 percent of the vote. The Sisi junta maintains that Qatar played a role in funding the Muslim Brotherhood in Egypt, and it summarily arrested three Al Jazeera journalists on trumped-up charges of trying to overthrow the Sisi government with their journalism. One, an Australian national, Peter Greste, has been released, but two others, a Canadian-Egyptian and an Egyptian national, face a retrial. The Al Jazeera Forum says it invited Egyptian government figures to the forum but was rebuffed.

The founder of the forum, Wadah Khanfar (who is also a former director general of the Al Jazeera Media Network), gave a summation speech in favor of a new Arab power bloc. He depicted the partial withdrawal of the United States from the Middle East as an opportunity for Arab self-assertion. He configured the United States as now largely allied with Iran rather than the Arab world, arguing that Washington backed the government of Haider al-Abadi in Iraq, that it declined to move against Assad in Syria for fear of ISIL and Al Qaeda taking over, and that it had begun distancing itself from the aerial bombing campaign against the Houthis.

In all these ways, Khanfar said, the United States and Iran were increasingly aligned. The resulting power vacuum in the Arab world, he said, should be filled by the Arabs themselves. They should put the Palestine issue back on the front burner and pursue pan-Arab interests in Syria and Yemen, he maintained. Khanfar stressed that the reassertion of Arab power should be multicultural, uniting the majority Sunni Arabs with Shiite and other religious minorities. His romantic depiction of a past in which they all got along received a rousing round of applause.

Khanfar’s depiction of US policies, and for that matter Gulf Arab policies, made them seem far more coherent than they are. The United States in fact supports the GCC bombing raids in Yemen and denounces the Houthis as usurpers, and even intervened to stop an Iranian ship convoy from reaching Aden with what were presumed to be supplies for the Houthi rebels. The United States also wants Assad overthrown, though it is true that Washington sees ISIL as the primary threat for the moment.

As for the government in Baghdad, Prime Minister Abadi has visited the Saudi capital Riyadh, and the Gulf states have bombed ISIL positions in Iraq on his behalf alongside the United States. Khanfar’s vision of the Abadi government as somehow illegitimate and “Iranian” would have provoked howls of outrage in Baghdad. Seeing the United States as allied across the board with Iran, or seeing the United States as at odds with the new Saudi-led power bloc, ignores these complexities. As for Palestine, the Obama administration has pressed for a Palestinian state more vigorously than any in recent memory. Baroness Sayeeda Warsi, who had been in the cabinet of British Prime Minister David Cameron but resigned last August over the government’s approval of the Israeli assault on the Gaza Strip, complained to the forum in her keynote that lack of support for the Palestinians in the Arab world had made it difficult for Western governments to condemn the Israeli actions. (The Saudi bloc views Hamas in Gaza as an Iranian and Muslim Brotherhood ally, and Riyadh is opposed to both.)

The forum displayed the severe fissures in the Arab world, and although Iran was well represented, the roster lacked many voices. Secularist nationalists were seldom heard from. Tunisia’s relatively successful revolution and transition to greater democracy was reported by Meherzia Labidi Maïza, parliamentarian from the religious-right party al-Nahda, or Renaissance, which was defeated at the polls last October. Many speakers at the conference seemed to identify “Arab” with “Sunni political Islam” and, as Ahmadian suggested, to demote secularists and Shiites or members of other religious minorities to second-class citizenship. That tendency was one Khanfar tried to counteract in his final remarks.

The tectonic shifts in the region were fully on display, as were the strong emotions and anxieties they provoked. The United States had been a bête noire at previous forums because of its intervention in Iraq and its pro-Israel stance. At this meeting, it was lambasted for walking away from the region and for turning to Iran as a new friend, or perhaps proxy. The reverses of Sunni political Islam in Tunisia, Egypt, Kuwait, and the United Arab Emirates likewise produced the attempt to shout down Ms. Dashti, a secularist and feminist who had waged the successful campaign for the women’s vote in Kuwait. Khanfar was right that in some ways there is a power vacuum in the Middle East. But that it will be filled by a united bloc of countries ruled by Sunni Arabs inflected with political Islam, as many at the conference seemed to hope, is not at all clear.