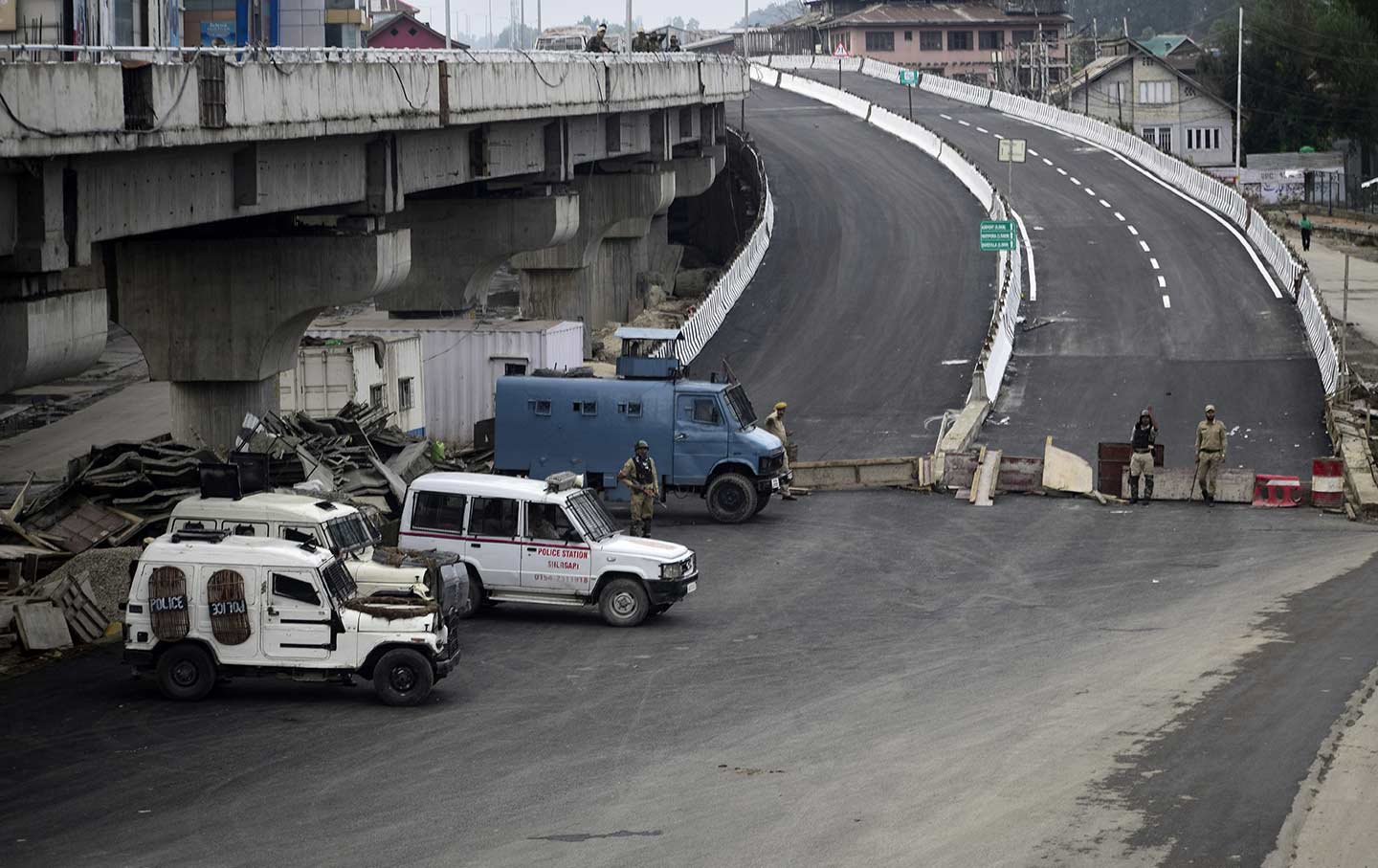 Within hours of India revoking Kashmir's autonomy, paramilitary and militarized police appeared at every intersection in Srinagar. (Sanna Irshad Mattoo)

Srinagar, Kashmir—I arrived in Srinagar, the summer capital of Indian-controlled Kashmir on August 1, and the next day, the government ordered tourists, non-resident students, and Hindu pilgrims to leave immediately. The ruling Hindu nationalist Bharatiya Janata Party (BJP) then deployed 40,000 security forces on top of the 400,000 military, paramilitary, and militarized police forces already stationed in this mountainous region between India and Pakistan.

While the state’s governor scolded Kashmiris not to engage in “rumor mongering,” people knew “something big” was on the horizon. With preparations for upcoming Bakr-Id (the biggest annual Muslim holiday) and wedding season well underway, residents flooded Srinagar’s shopping centers. In just a few hours, families spent their monthly disposable incomes on fuel, rice, cooking gas, flour, and other essentials. Everyone knew they had to be prepared, but no one knew exactly what for.

When the 8 million residents of the state awoke on August 5, they found themselves without cell phone, landline, Internet, or cable-television services. Twelve hours after the blackout, the BJP revoked the region’s autonomy (Article 370 of India’s Constitution), and the state was divided and demoted into two union territories. The BJP justified the moves as a way to bring “development” to the state—part of a strategy to enhance tourism, facilitate democracy, end terrorism, and grant women and low-caste persons greater rights. 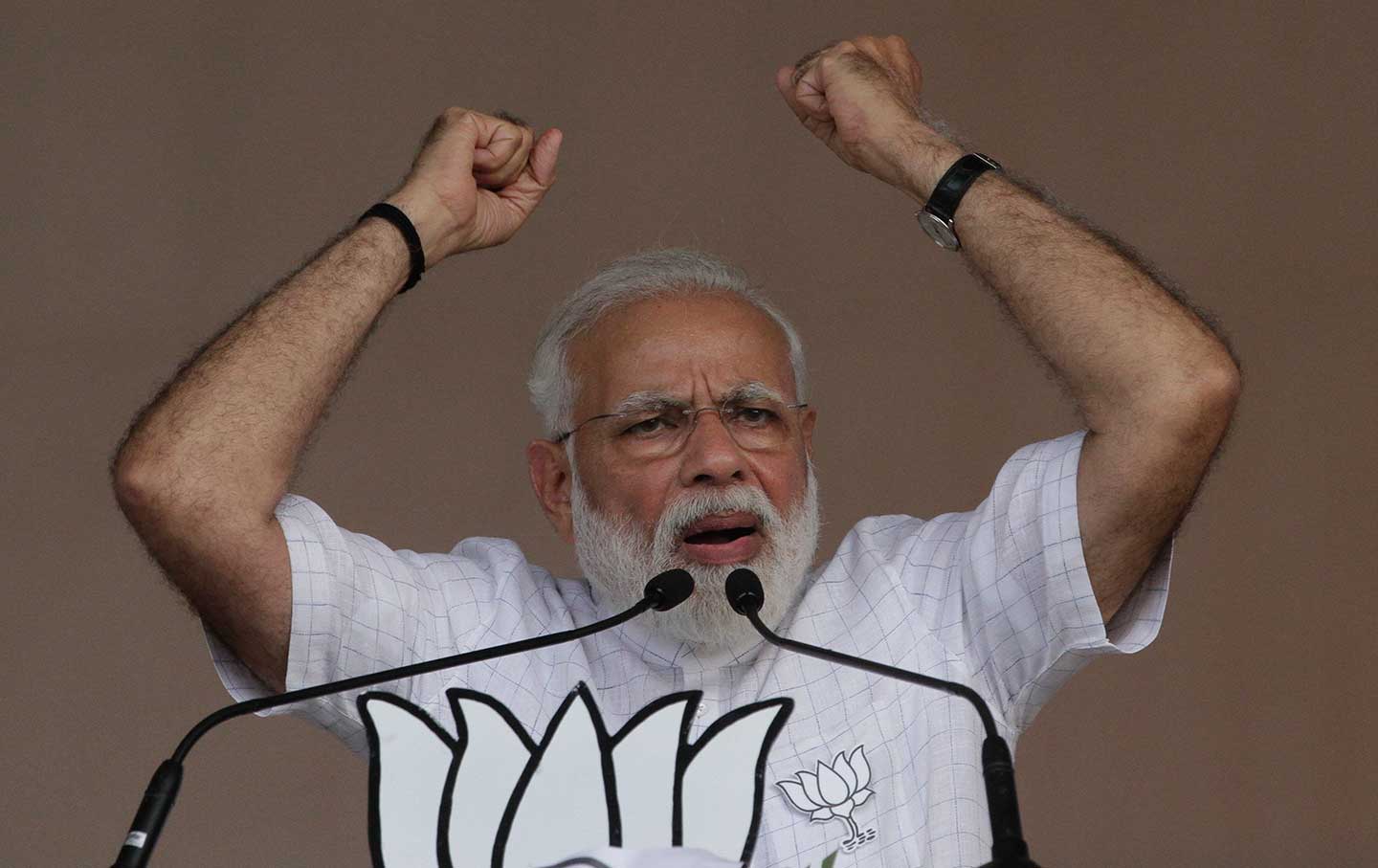 At the time of writing this, the undeclared emergency and communication blackout has been in effect for 29 days, with no information about its end. The overnight demodernization of civilian life, paralysis of essential infrastructures, and escalation of military and paramilitary forces, marks a dangerous new low for Indian rule in Kashmir, which has for decades rested its moral claim on Kashmir as a liberal, secular, and democratic state—unlike, India claims, its arch-rival Pakistan.

Within hours of the announcement, Srinagar became a “razor-wire city.” Paramilitary and militarized police appeared at every intersection, blocking crossings, roads, bridges, and highways with coils of concertina wire. Security forces divided and subdivided space into manageable martial units, preventing the movement of people, goods, and information. On approaching these checkpoints, officers with whistles and guns guide you back from where you came. The city is an ever-evolving labyrinth: New blockades appear and disappear within a span of hours. Any spatial knowledge, once used, is quickly obsolete.

Residents grapple with the uneasiness of an indefinite undeclared curfew. This may sound easier to navigate than a declared curfew—which is typically announced over loudspeakers by patrolling paramilitary or police jeeps or from mosques—but it’s actually much more harrowing. Even during the most intense years of Kashmir’s armed insurgency, there were one or two hours every day that the curfew would be relaxed so people could procure essentials. In an undeclared curfew, however, freedom is tightened or relaxed unpredictably. It is only by taking bodily risks and testing the will of soldiers that determines the curfew’s status.

Not even in the previous sieges in Kashmir, such as the in 2010 and 2016, was there such a clampdown on information. The government has set up a “media facilitation center”—a hotel conference room where dozens of journalists have access to two decrepit desktops with Internet access. It takes hours to access the computer for five minutes, one journalist told me. The highly centralized set up means all communications are likely surveilled, leading many to avoid the center. One journalist joked about the Internet speed, “Forget 4G or 5G, this speed is not even 1G!” 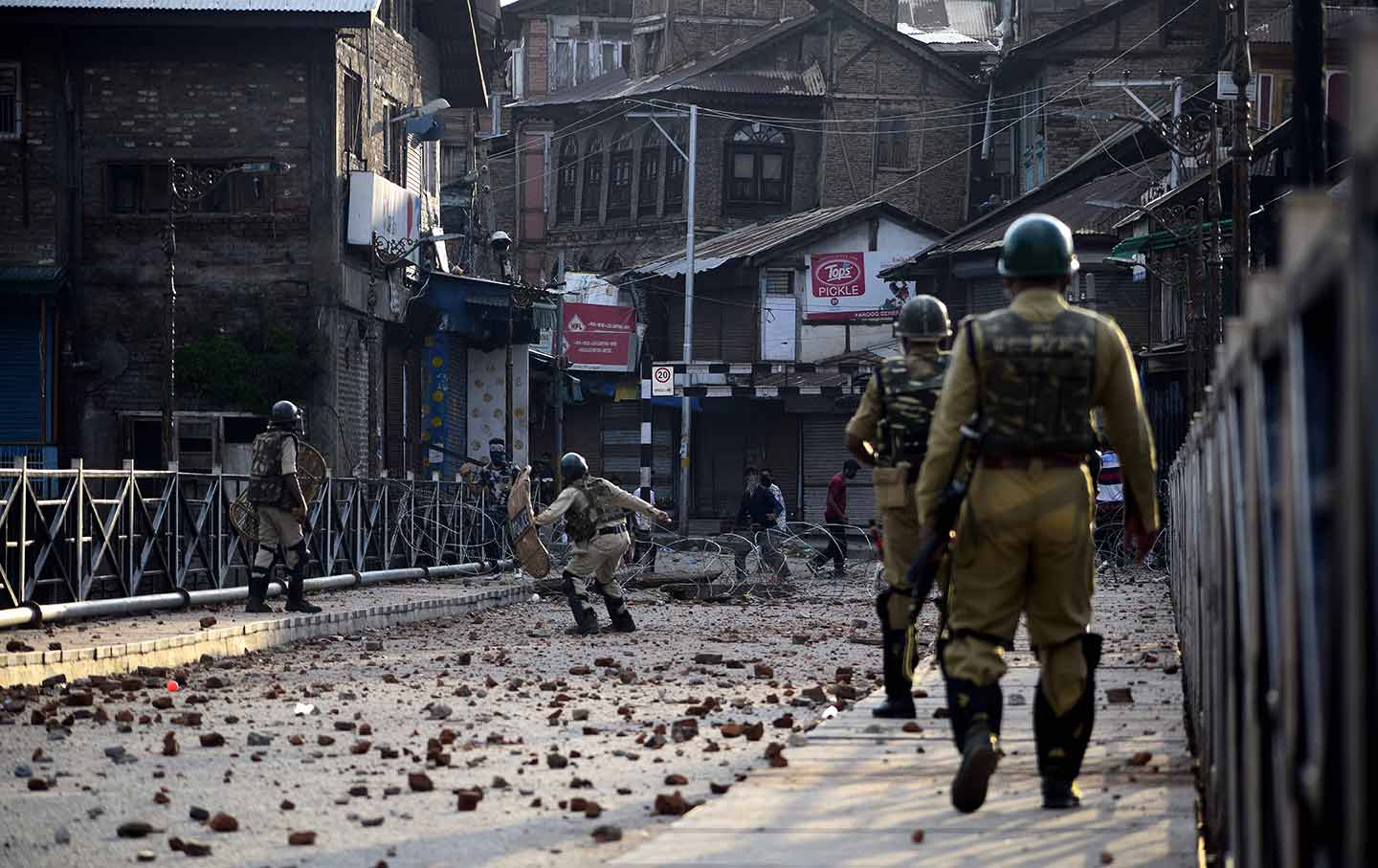 In recent days, Kashmiri journalists have been intimidated and barred from leaving the region. (This piece, too, required a herculean effort to publish: A draft with photos was sent on a pen drive through a Reuters journalist, then emailed to a friend in the US, who reached out to the editor of The Nation and provided editing support until I could access e-mail.) Because of the blockade, journalists struggle to cobble together information about the thousands of young men who police have arrested in the middle of the night. (Under one of the many stringent emergency laws in place, preventive detention is legal).

The blockade is devastating for civilian life. Although the government reopened schools on August 20, with the ongoing curfew and blackout, they are empty shells—teachers and staff are forced to attend, but pupils remain absent, their parents too uneasy to send them. While ATMs reopened, banks remain closed, because their Internet and communication systems are tied to a separate power grid, which remains paralyzed.

State officials describe the siege as necessary to “maintain peace” and ensure “law and order.” Yet communication and information blackouts, indefinite curfews, and militarism are not strategies of peace, but of what’s called “infrastructural war.” The geographer Stephen Graham and others have argued that the infrastructure that sustains urban life is increasingly at the heart of modern political violence. This infrastructure does not only make for targets for terror attacks; it also, Graham writes, lies “at the heart of contemporary means for projecting what can only be called state terror.” Infrastructural war targets civilians, not insurgents, by reaching into the crevices of everyday life and reengineering communication, information sharing, and travel.

India is by no means alone in inflicting infrastructural war. Such methods have been used against Gazans and Lebanese during Israel’s blockades, Iraqis during the first Gulf War and the US-led occupation, and Egyptians during the Arab Spring, to name a few. Given that the right to communication and information are fundamental human rights, infrastructural war constitutes a form of collective punishment that contravenes international humanitarian law. In a revealing moment, one BJP spokesperson described the siege as revenge for the deaths of approximately 100 Kashmiri Hindus in 1990 at the beginning of Kashmir’s armed struggle for independence against Indian rule. 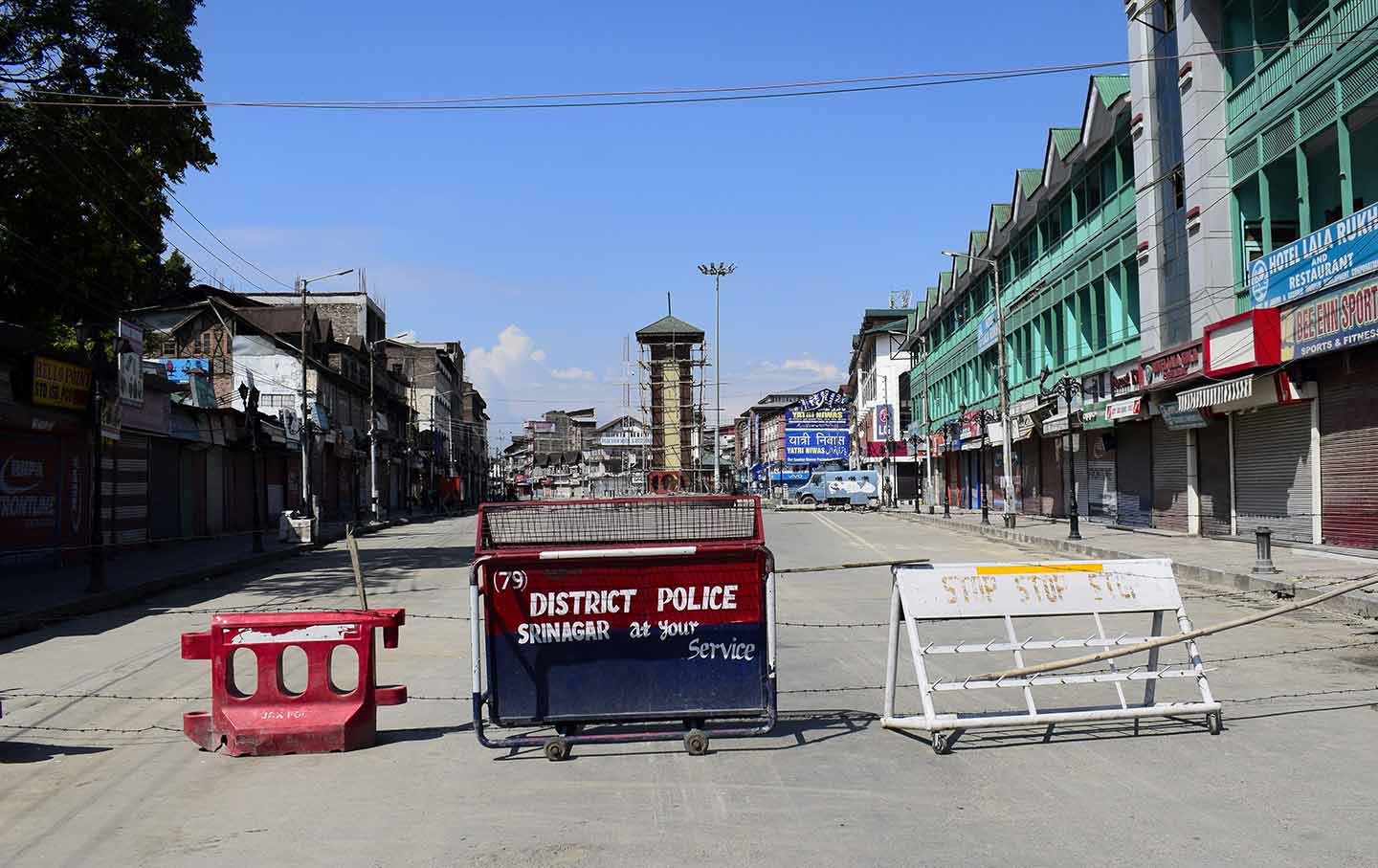 Police blockades go up and down, making the city difficult and dangerous to navigate. (Sanna Irshad Mattoo)

Unlike targeted bombing campaigns, which destroy electricity grids and other infrastructure, the war in Kashmir avoids physical devastation in favor of temporary disruptions. While inflicting mass injury, the reversibility of this siege ensures that the state’s justifications about safety and law and order remain plausible. As with the US invasion of Iraq in 2003, which carefully maintained Iraq’s electrical grid to enable the installation of client regimes, in Indian-controlled Kashmir, intact infrastructures will facilitate the movement of neoliberal capital to the region. Within days of Prime Minister Narendra Modi’s speech to bring “development” to Jammu and Kashmir, India’s richest man, Mukesh Ambani, pledged to invest millions of dollars in Kashmir.

Infrastructural war demonstrates how lines separating military and civilian life have been blurred. By suspending due process and democratic rights and imposing an indefinite state of emergency, Kashmir has become a zone of permanent, limitless war. As Philip Agre, a former associate professor of information studies at UCLA, has described in another context, this is war “in the new sense—war with no beginning or end.”

Although essential supplies trickle in, people are running short of money. I heard of middle-class families breaking their children’s piggy banks to keep afloat. Many have not been paid salaries and are hollowing out their meager savings. Thanks to a legal provision which facilitated some of the most progressive land reforms in the Indian subcontinent, practically all Kashmiris, regardless of economic status, own land and have secure housing. These reforms, now abrogated, have softened the siege’s most blunt effects.

People are fighting back in creative ways. Kashmiri practices of stockpiling food, cultivating kitchen gardens, and preserving vegetables—originally developed for long winters—have proven adaptable to curfews. As the days wear on, the situation becomes more difficult to bear, even for a population well equipped for siege. As one elderly woman said to me, “We don’t mind death, but it’s the slow death that we are most afraid of.” 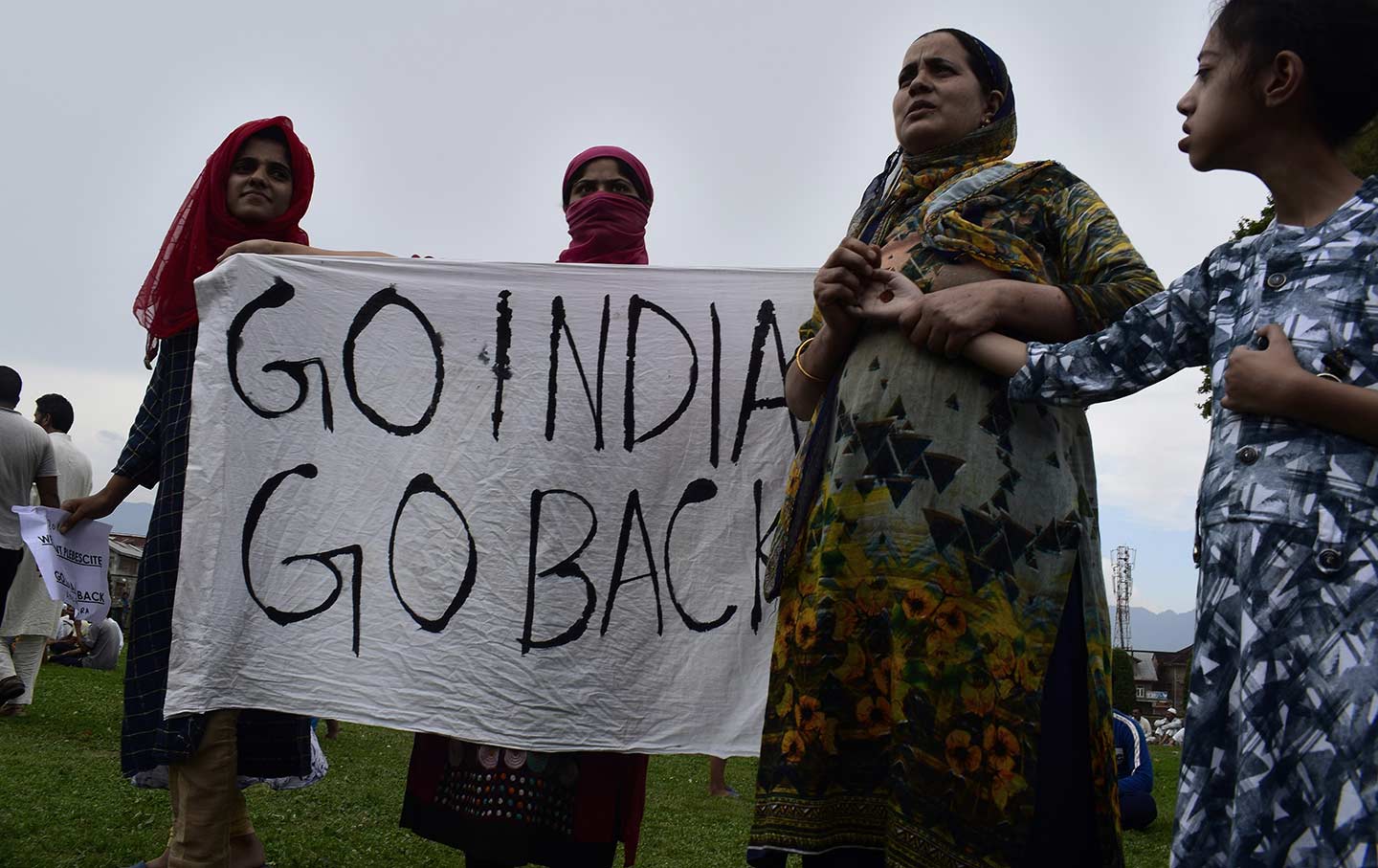 In the absence of e-mail, security guards have become repositories of letters, news, and information. One Kashmiri doctor showed me postcards he has been exchanging with his fiancée, who he hasn’t seen for weeks. “It’s like the old times,” he smiled, “Even a little romantic.” Despite the information blockade, news is still, miraculously, flowing. In one day, I hear the same piece of information at two opposite ends of the city. Journalists soothe themselves with the thought that the infrastructural blockade has also hurt the state; it has cut off its eyes and ears. “They are getting desperate now,” one journalist told me, “because they no longer know what people are thinking.”

The night raids, where young men are snatched from their beds, are also being challenged. In one heavily militarized neighborhood in Srinagar, people stay awake all night keeping vigil. They have barricaded their neighborhoods using corrugated steel sheets, garbage vestibules, wire, and wheel-barrows, and dug trenches to prevent police and military vehicles from entering. At the sound of a police van approaching, a lookout runs to the local mosque so an announcement can alert everybody to the upcoming raid. By many accounts, these guerrilla tactics have been successful.

The siege on Kashmir is a war against the spirit. The message to Kashmiris is to forget the dream of a Kashmiri nation. There will be no more indirect rule; with the new designation, Jammu and Kashmir is not even a state in India anymore. Many here feel that under Modi, dissent has been forbidden; minorities disenfranchised; and democratic norms subverted.

India’s infrastructural war is designed to extinguish resistance. This leaves Kashmiris with a choice: acquiesce or rebel. I’m reminded of a conversation I had with a doctor during the last uprising, who told me: “It might not be a good decision for a few hundred people to stand up to 400,000 troops. It might be a very bad decision. But sometimes, you have no choice but to make a bad decision.” Kashmiris find themselves, yet again, on the precipice of a bad decision.