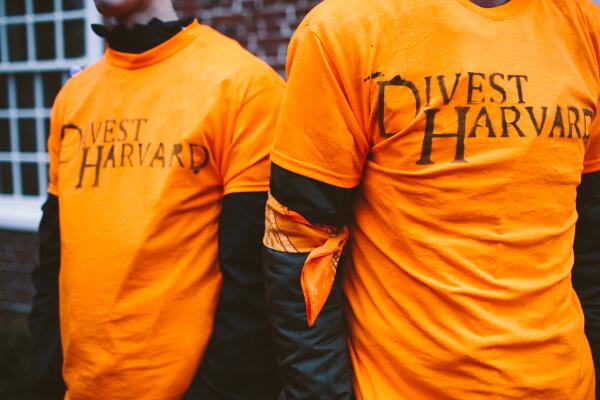 Earlier this week, the leadership of Hong Kong’s undemocratic government participated in a live, televised forum with student protesters about the future of democracy in the territory. At the very same time, throughout this week, students calling for fossil-fuel divestment at Harvard University have been engaged in a conscientious and well-organized fast—supported by many students, faculty, and alumni—after their legitimate calls for an open public dialogue with you, over the course of more than two years now, have been rejected. It appears that an open debate about democracy is less threatening to the leaders in Hong Kong and Beijing than the prospect of an open debate about fossil-fuel divestment—and the corrupting influence of fossil-fuel corporations on our American democracy—is to the administration of Harvard University.

I have a personal stake in this debate. I am a member of the Harvard College Class of 1990, deeply engaged in the Divest Harvard campaign, and as I write this, amazing as it may sound, I stand effectively banned from Harvard’s campus because I dared to protest peacefully against your administration’s position on fossil-fuel divestment and your lack of public dialogue with the students. My purpose here is to respectfully inform you that this Sunday, October 26, I’m coming back to campus in an open and conscientious violation of that ban.

On May 30 of this year, as I’m sure you will remember, I and three of my fellow Harvard alumni—holding degrees from the Business School, the Divinity School, the Law School and Kennedy School, and the College—stood silently in front of the stage where you were sitting in Sanders Theater, as you were about to address several hundred Harvard graduates attending their class reunions. With the support of many fellow alums engaged in the divestment campaign, we held a banner with the words “Harvard Alumni For Divestment.” We stood in solidarity with the students of Divest Harvard, and we stood for the kind of action necessary to address climate change, the greatest and most urgent human rights struggle of our time.

As we stood with our banner, we were immediately approached by a plain-clothes security officer—who discreetly attempted (but failed) to rip the banner from my hands—and were told that we would have to leave. When we quietly and respectfully declined to move, uniformed Harvard Police were called in, and we were ushered out of the theater. The whole thing, you will recall, lasted perhaps two minutes. As I walked out, I noticed that you were smiling.

You must admit that we went peacefully. Indeed, everything about our action was peaceful. It’s worth noting that we very purposely did not interrupt your speech, and that as far as we could tell, nothing about our action prevented you from speaking or members of the audience from hearing what you had to say. We were there simply to make our presence and our message known, in a way that could not be ignored, and to bear silent witness to the proceedings—a Harvard reunion event that, as everyone knows, is central to the university’s fundraising operations and therefore of the utmost relevance to the call for divestment.

But this is where it gets interesting, President Faust. Once outside the theater, in the foyer of Memorial Hall, the Harvard Police officers—who were nothing but courteous and professional, simply doing their jobs—informed us that we would not be arrested. At least, not that day. We could have been: Harvard certainly might have arrested us, charged us with trespassing or whatnot, and been done with it—just another civil disobedience protest on an American university campus.

But that isn’t what happened, is it? As we waited quietly, the officer in charge spoke on his phone with someone, presumably a superior officer, and when the call was finished, he told us that we were free to go—with one catch. If we came back onto Harvard property for any reason, he said, we would be subject to arrest. However, he said, if we made an appointment to speak with the chief of the Harvard University Police Department (vested with real police powers in the City of Cambridge), and asked his permission to return to campus, the police chief might agree to rescind this order. It was made very clear that the decision would be the chief’s.

In other words, Harvard appears to have delegated to the chief of its police force the power to decide whether or not four peaceful alumni activists can return to campus for any reason—including to engage in further political speech.

This Sunday, Harvard Faculty for Divestment—the group of more than 160 faculty members who have signed a resolution calling on the university to divest from fossil fuels—is holding a “Faculty Forum on Divestment” in Fong Auditorium. The event is billed as “free and open to the public,” and I plan to be there and to participate in the discussion. I have informed the faculty organizers that I am coming, but they have declined to take a position, one way or the other, as to whether they support my presence there.

I am not asking anyone’s permission to come back to Harvard’s campus for this event. Specifically, I do not recognize the authority of Harvard’s police chief to decide whether or not I can participate in this free and open discussion on the campus of my alma mater. While Harvard may or may not have the legal right to prevent me or to arrest me once I’m there—an interesting question in itself—I firmly believe, along with many others, that in terms of academic values, this order is an illegitimate use of a university’s police powers, clearly intended to intimidate and to suppress speech on this issue.

Whatever happens on Sunday, I and the other banned alumni—like the divestment campaign and the larger climate movement of which we’re a part—are not going away. We’ll be back on campus, with or without permission, to continue engaging in this most important of debates. It would restore some of my faith in this university if you would personally join us, openly and publicly, in this debate.

My wife, also a member of the class of 1990, will be there on Sunday to support me. Together, we have been engaged in the life of the university for 25 years. For the past five years, we and our children, age 10 and 14, have served as a host family for incoming international students. One of them is a current sophomore from Beijing, a place where political freedoms are less than perfect. Another, our newest undergraduate friend, is a freshman from South Africa—a country whose history is a testament to the power of principled political struggle.  These students are inheriting a world ravaged by our climate catastrophe. Whether any semblance of a just society remains possible for them and future generations depends on the actions we take today.

I only wish that my action at Harvard this Sunday were unnecessary—that I didn’t have to show my young friends what it takes to defend the principles of free and open speech at the great American university they have worked so hard to attend.

UPDATE—Monday, Oct. 27, 4:12 pm: On Saturday afternoon, I received an email from Professor James Engell, one of the core organizers of Harvard Faculty for Divestment, who passed along this message from Michael Giacoppo, Deputy Chief of Harvard University Police:

Dear Professors: Engell, Oreskes, Marglin: This is an FYI message that Chief Riley wanted sent in regards to the Fong event tomorrow evening. Mr. Stephenson is welcome to attend this or any other event on campus at this time. Please contact me should you have any questions.

Very well, then. It appears that I am no longer banned from Harvard. It's worth noting, though, that I have received no communication from the Harvard police or administration myself. And the officer's message said nothing about my three fellow alums.

The faculty forum on Sunday was excellent. As The Harvard Crimson reports, faculty members “discussed the science behind climate change on Sunday evening and continued to urge University officials to divest Harvard’s endowment from fossil fuel companies, arguing that doing so would galvanize ‘political will’ needed to change energy production and consumption.”

Near the end of the two-hour session, during the Q&A, I introduced myself and said that I was "very happy to be here unmolested by Harvard University Police"—which earned a round of applause (I guess a few people had read my letter to President Faust). I then asked a question about the political culture at Harvard. There's a "resistance, deep-seated, to resistance" on campus, I observed, and I asked whether a statement from faculty supporting civil disobedience might be in order, given the gravity and urgency of what Professor Anderson had explained to us. The answer: as a group, Harvard Faculty for Divestment isn't ready to make that kind of statement, but individual members, including most if not all of those present, certainly are supportive.

On the way out, I thanked Jim Anderson, and I said that I know a lot of people who are really good at planning civil disobedience actions, just in case he's interested.