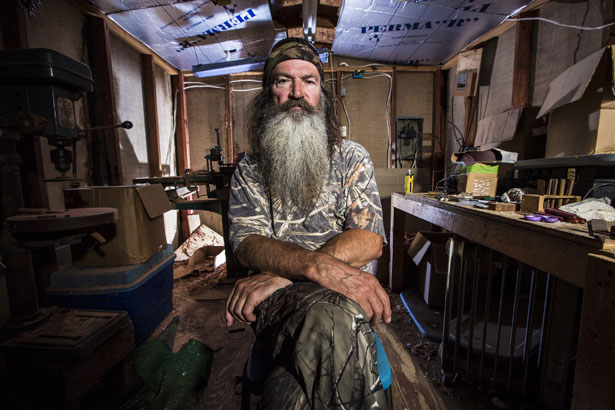 Call me a slackjaw, but I was just shocked to discover that Phil Robertson, the 67- year-old shotgun-toting, Bible-quoting, self-described redneck star of A&E’s reality-TV show Duck Dynasty, does not particularly like us gay people. “It seems like, to me, a vagina—as a man—would be more desirable than a man’s anus,” he told GQ magazine, while also evoking the slippery slopes of adultery, prostitution and bestiality. Well, chew on that. Until now, I thought Robertson was kinda like a Santa Daddy, and that when he wasn’t busy shooting birds out of the sky, adorable gender-neutral chipmunks nestled in his nicotine-stained beard, enjoying a lifelong contact high.

No, I’m just messing with you. And so is everyone else who has embarrassed themselves in this political charade—from Papa Robertson himself, who was later revealed to have once called gay people “insolent, arrogant God-haters”; to GLAAD, whose very-rapid-response statement condemning Robertson and his “lies about an entire community [that] fly in the face of what true Christians believe” reads as both canny and canned; to the A&E executives who put Robertson “under hiatus from filming indefinitely” while continuing to broadcast a twenty-five-episode Duck Dynasty rerun marathon on Christmas Day; to the flotilla of conservative pols like Sarah Palin, Bobby Jindal and Ted Cruz who rushed to defend Robertson’s First Amendment right to… have a reality-TV show?

Let us not dignify this incident by calling it a culture war. In a war, there are winners and losers, but in this elaborate pantomime, everyone comes out ahead. GLAAD gets the e-mails of thousands of gay and liberal clicktivists and a justification for its continued sorry existence. The Robertson family and A&E get an avalanche of free press ahead of the show’s fifth-season premiere, as well as a much-needed shot in the arm for the idea that any “reality” remains in the “guided reality” formula. Failed reality-TV star Sarah Palin, who now admits she has not read Robertson’s interview with GQ, briefly returns to cultural—if not political—relevance. And everyone gets to be outraged or shamed, which are just about the only two registers left for public recognition of any sort in the altogether joyless mass media.

But what has anyone really learned? The deepening trough of reality TV has put before our prying eyes and smugly clucking, nodding heads a whole host of previously underexamined social ills—compulsive hoarders, fascist dance moms, bridezillas, the entire Kardashian clan—but on the actual lived context of homophobia and racism, it has almost nothing to say. That terrain was ceded long ago to starchy documentarians and the comedian Sacha Baron Cohen, whose alter-egos Borat and (less successfully) Brüno were perhaps the last fake/real figures to elicit demonstrations of casual everyday prejudice in ways that were both revealing and thoughtful.

This is why A&E now has, if not an obligation, a golden opportunity. The network should return Robertson and Duck Dynasty to the air—but not in the adulterated cartoon version that has conservatives so besotted (a Facebook page calling for a boycott of A&E has generated more than 1.8 million likes). No, Duck Dynasty should get real: it should show Robertson being as homophobic as he pleases in his home, his church, his community. The show has previously been criticized for asking Robertson not to say “Jesus” at the end of his prayers; they should now let him get his Jesus freak on, whether in words that invoke hellfire and damnation or those that profess to love the sinner but hate the sin. And as long as the show’s producers “guide” reality along, they should film Robertson interacting with actual gay people. If the LGBT population of West Monroe, Louisiana, is camera-shy, they can fly some folks in for a good old duck hunt. I bet Mary Cheney is pretty handy with a shotgun.

As for gay activists, they should rethink their reflexive strategy of playing whack-a-mole every time some reality-TV star or pasta executive or former cast member of 30 Rock says something homophobic. After all, who is GLAAD to say that the Christianity of Robertson’s Churches of Christ denomination is any less true than the Christianity espoused by Unitarian Universalists? Or by Pope Francis, who—Marxist-ish apostolic exhortations against unfettered capitalism aside—has yet to condemn a bill in Uganda, where Catholicism is the most popular religion, that would condemn those convicted of “aggravated homosexuality” to imprisonment for life. The point is: a lot of people believe as Robertson does, or have yet to break faith with religions that formally espouse beliefs approximating his. And until that is no longer the case, I’d rather see the whole picture—homophobia included—than a caricature of the cuddly duck hunter or pontiff.

Of course, driving offensive utterances underground can feel like a victory. But consider this: it is no longer acceptable to use the N-word in public, but that doesn’t mean a whole lot of folks don’t think it, or think media-savvy versions of it. To wit, the truly offensive part of Robertson’s interview was not his crude anatomical account of human sexuality, but his insidious take on the experience of African-Americans in the pre-civil-rights South: “I never, with my eyes, saw the mistreatment of any black person. Not once. They’re singing and happy…. Pre-entitlement, pre-welfare, you say: Were they happy? They were godly; they were happy; no one was singing the blues.” This is straight from the racist textbook that justified slavery as one big happy plantation, and Robertson is off-script only in the sense that he hasn’t updated his rhetoric to the 2.0 color-blind version, which acknowledges that while discrimination once existed, its time has now passed.

But the past, as we all know, isn’t even truly past. Gay activists should remember that in the future before conflating momentary outrage with enduring social change.