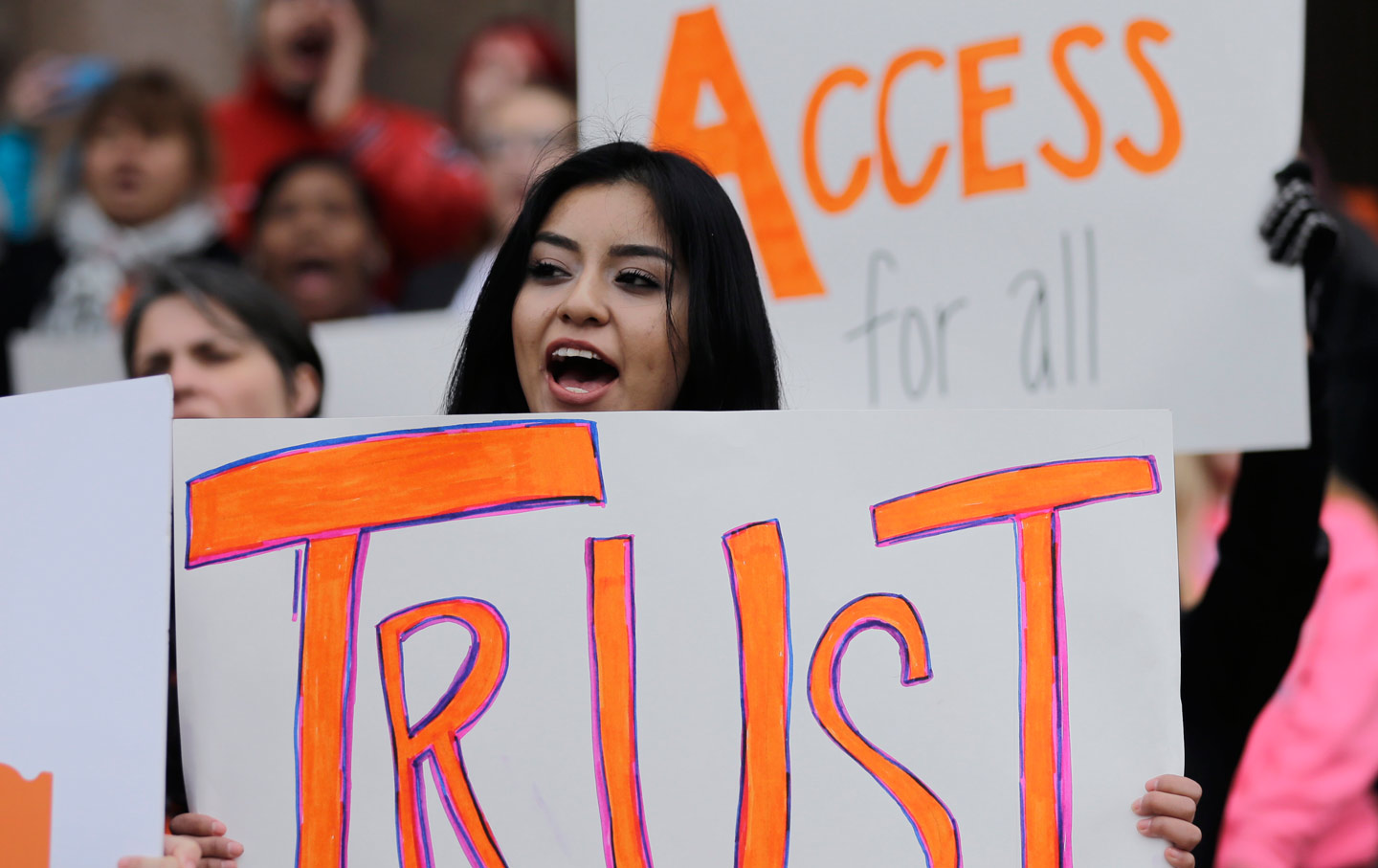 Would abortion rights be more secure today had Roe v. Wade been decided on the basis of women’s right to equality rather than privacy? Many smart people have thought so.

You can see why this is a tempting argument. Roe has been relentlessly attacked as confused, illogical, and poorly written, relying on a concept of privacy that is found nowhere in the Constitution (in Griswold v. Connecticut, the 1965 decision that struck down a state ban on birth-control use by married couples, Justice William O. Douglas famously located the right to privacy in the “penumbras” and “emanations” of various provisions, such as the Fifth Amendment’s guarantee against self-incrimination). To conservatives, Roe is the very definition of judicial overreach. Wouldn’t it be a good thing if abortion rights could be reconstructed on more solid ground?

In a recent article in The New Yorker, the historian Jill Lepore sides with those who see privacy as the fatal flaw in Roe. Asking why the fight for same-sex marriage has been won while the struggle to secure abortion rights is languishing, she writes: “There is a lesson in the past fifty years of litigation. When the fight for equal rights for women narrowed to a fight for reproductive rights, defended on the ground of privacy, it weakened. But when the fight for gay rights became a fight for same-sex marriage, asserted on the ground of equality, it got stronger and stronger.”

It is certainly true that the effort to preserve abortion rights has soaked up vast amounts of money, energy, skill, and time. When I began “Subject to Debate” in 1995, I had no idea that years later I would be writing about abortion so often and so intensely that I would get letters addressed to “Katha Pollitt, abortion writer.” Perhaps, in a different world, with abortion rights secured once and for all, feminists could have focused on new, broader demands. Instead, the relentless nature of abortion opponents has kept feminists from winning new territory by forcing us to defend the same old bit of turf again and again and again.

The same people who reject the right of women to control their own bodies also disapprove of women’s equality.

But would a different Roe have prevented that stagnation? I don’t think so. The same people who reject the right of women to control their own bodies also disapprove of women’s equality. Look at the backbone of the antiabortion movement: the Catholic Church, the Mormon Church, the fundamentalist Protestant churches. They don’t believe women are men’s equals; they themselves practice female subordination quite energetically. There are, of course, liberal and feminist and atheist anti-choicers, and doubtless many believers too, who would say they believe women are men’s equals. But what they usually mean is that women and men have different, equally valuable social roles determined by their reproductive roles. I have never found an abortion opponent—and believe me, I’ve tried—with a serious program for achieving gender equality in a world in which women are forced to carry every pregnancy to term. They’re pursuing a different goal: reconnecting sex and reproduction by raising the cost to women of sex for pleasure. Even among the squishy pro-choice majority, that women should have sex “like men” may be taking equality too far.

Lepore notes that the courts could have used the 19th Amendment, which granted women the right to vote, to expand women’s rights on equality grounds. Instead, it proved legally sterile. This is a fascinating observation. The right to vote didn’t even win women the other rights that came with citizenship for men—the right to serve on juries, for example. The legal victories for women’s equality that came in the 1970s were based on the 14th Amendment’s guarantees of equal protection and due process.

Why was the 19th Amendment the path not taken? If Lepore had asked that question, she might have been led to a depressing conclusion: American jurisprudence didn’t build on the 19th Amendment because Americans didn’t support the concept of women’s equality. Suffrage (which, let’s not forget, took 75 years to win) was a one-off. The women’s movement is sometimes blamed for grounding abortion rights in privacy, but the fault doesn’t lie with it. Justice Harry Blackmun, who wrote the decision, was presented with both pro-equality and pro-privacy arguments. He preferred privacy. Not only did it fit in better with traditional ideas about women being sheltered within the family; it also fit in better with Blackmun’s concern for the right of doctors to treat their patients as they thought best.

Privacy has fallen out of favor with feminists, but Americans have a real tradition of respect for the individual versus government intrusion. It appeals to both liberals and conservatives, and connects naturally with individualism, libertarianism, civil liberties, and what Justice Brandeis called “the right to be left alone.” The tradition of women’s equality is much shallower: Even when the women’s movement was at high tide, we could not win passage of the Equal Rights Amendment. Indeed, I would argue that it’s precisely because the right to abortion is a necessary guarantor of gender equality that it has attracted so much hostility. Those who say that privacy doesn’t cover the right to kill your baby also say that if killing your baby is what you need to be equal, you’ll just have to lead the lesser life.

Same-sex marriage is an idea whose time has come-—even in Ireland, where it was voted in by popular referendum, and where abortion is barely legal even to save the woman’s life. It remains to be seen whether it will usher in wider basic rights for LGBT individuals, such as protection from job and housing discrimination, especially in the face of laws expanding so-called religious freedom. The one sure thing is that Justice Anthony Kennedy likes gay rights more than abortion rights—and might well do so regardless of the arguments advanced on behalf of each cause. Sometimes one man is all it takes—if he’s the swing vote on a divided court.