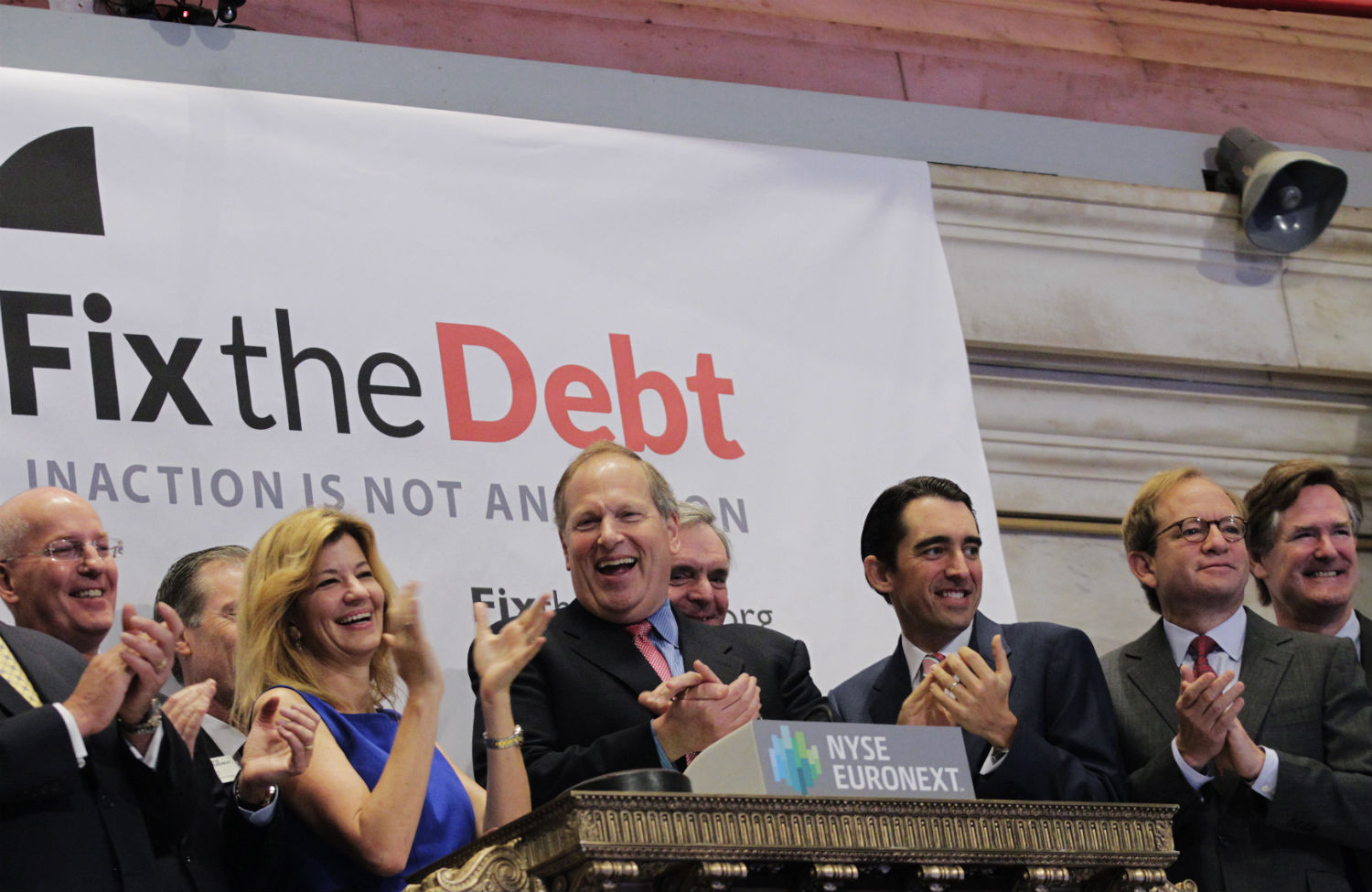 Maya MacGuineas, David Cote, (C) and other members of the Fix the Debt steering committee ring the opening bell at the New York Stock Exchange on October 25, 2012. (Reuters/Brendan McDermid)

It’s debt ceiling time and the US economy is once again on the brink, held hostage by extremists hell-bent on forcing cuts to Medicare and Social Security.

Oh wait. That was last year.

In 2014, for the first time in three years, the vote to extend the nation’s debt ceiling did not bring the United States to the brink of default in a high-stakes game of slash and burn.

Last week, the House voted to raise the government’s borrowing limit until March 2015 without any conditions. In fact, if the Speaker had his way, he would have tied the vote to the repeal of cuts to military retirement pensions. The Senate concurred, sending a clean debt ceiling bill to the president’s desk.

It was a striking turnaround for the forces of austerity. One of the biggest losers? The Campaign to Fix the Debt, the $40 million AstroTurf austerity group, financed by Pete Peterson and other Wall Street big wigs, and fronted by Maya MacGuineas, Erskine Bowles and Alan Simpson.

Fix the Debt Pushes America Towards the Fiscal Cliff

It wasn’t supposed to be this way.

In July of 2012, the Campaign to Fix the Debt was launched with a patriotic flair. It set a July 4, 2013 deadline for an austerity deal along the lines of the $4 trillion Simpson-Bowles plan. The austerity crowd had already succeeded in rigging the game, creating a December 31, 2012 “fiscal cliff” that would trigger steep budget cuts without a bipartisan deal. Now they were poised to take advantage of that deadline and other standoffs to secure a “Grand Bargain.”

The idea was that Democrats were supposed to trade cuts to earned benefit programs like Social Security and Medicare for a bit more tax revenue from the Republican side. The president, who had created and backed the Simpson-Bowles commission, appeared willing to make a deal.

With a stalled economy and public sentiment decidedly against cuts to these popular and lifesaving programs, Fix the Debt gathered the big guns. Over 100 CEOs were named to a council and many contributed to the $40 million budget. Fix the Debt CEOs descended on the White House and the Capitol building. The nightly news was filled with images of CEOs like Honeywell’s David Cote stepping up to the mike to opine about the need for belt-tightening and shared sacrifice.

To show “grassroots” momentum, Fix the Debt hired PR firms, had them set up phony state chapters, bankrolled the stunts of its youth group, The Can Kicks Back, which donned a foam tin-can suit (the AmeriCAN) for cute videos and hyped slanted numbers about “generational inequality.” America was going to rise up they said, they were going to get 10 million people to sign petitions.

The goal, as Tennessee Governor Phil Bredesen so helpfully let slip, was to create an “artificial crisis” to get Congress to act.

But a funny thing happened on the way to the fiscal cliff: real people fought back.

Grassroots groups were in no mood for advice from Fix the Debt CEOs, like Goldman Sach’s Lloyd Blankfein, who somberly explained to CBS News in November 2012 that Americans had to “lower their expectations,” the retirement age had to be raised and “entitlement programs have to be slowed down and contained.”

Vermont Senator Bernie Sanders hit the roof, taking to the floor to denounce Blankfein for his unbelievable arrogance, given the role the big banks played in collapsing the economy and skyrocketing the deficit. Days later protesters descended upon a Fix the Debt event for the first time, chanting loudly and rattling a senior presenter from the Heritage Foundation. Burke Stansbury from the Campaign for Community Change took a punch from the Heritage hysteric and the throwdown was on.

Dozens of small groups jumped into the fray including Social Security Works, Institute for Policy Studies, Campaign for America’s Future, Public Accountability Initiative and more, pulling back the curtain on the real agenda of the group and its leadership council.

In February, The Nation and the Center for Media and Democracy partnered on a front page, five-article exposé and an online resource platform exposing Pete Peterson’s history of deficit histrionics, of bankrolling puppet populists and his lousy economic theories. Fix the Debt’s spokesman called to complain, prompting one of the funnier exchanges between a PR flak and a reporter in recent memory.

Grassroots groups surged into action to call out the CEOs with platinum-plated pensions who wanted to cut Social Security, targeting state-level Fix the Debt leaders. In Iowa, co-chair Dr. Andrea McGuire, former Congressman Dave Nagel and State Representative Bruce Hunter all resigned after learning more about Fix the Debt from the Iowa CCI. Michigan lost their co-chair Jocelyn Benson and Virginia State Senator Ken Plum chose to pull his name, along with Juan Cotto of Washington State and many more.

In April, legislative and community leaders including Sanders, Representative Keith Ellison, Representative Mark Pocan and Terry O’Neill of NOW rallied in front of the White House to push the president to leave Social Security cuts out of his budget. When Obama included “chained CPI” cuts to Social Security, groups redoubled their effort to get him to change his mind.

For added measure, economists at PERI Amherst made headlines by uncovering coding errors and other problems with the seminal Rogoff-Reinhart study, which purportedly provided the empirical evidence that austerity led to growth.

In May, Fix the Debt organized its first spontaneous “flash mob” sending reporters and activists scurrying to interview participants who proved to be paid dancers ($65 for the day) not at all interested in cutting Social Security.

In June, the Institute for Policy Studies released another damning report, “Pirate of the Caribbean,” showing that Fix the Debt member firms stood to gain as much as $173 billion if Congress adopted its proposal for a territorial tax system, a tax break which would only increase the debt.

In July, hundreds of members of the grassroots group Iowa CCI visited the home of Fix the Debter David Oman calling on him to renounce austerity policies that would hurt Iowa seniors. Activists celebrated when Fix the Debt missed its July 4 deadline for a deal.

In August, National Peoples Action kicked off the “CEO Summer” (Corporate Evil Outing) in fifteen cities and towns. Take Action Minnesota dropped a huge banner across from a Fix the Debt gathering, while in Chicago, clergy, IIRON, and ONE Northside targeted General Electric for its failure to pay taxes and urged Senator Dick Durbin to stiffen his spine and do more to support Social Security. Vocal New York descended on the home of Verizon board member Hugh Price, calling on Verizon to pay its taxes and stop lobbying for harmful budget cuts.

In October, the AFL-CIO pulled out all the stops. President Richard Trumka warned: “No politician… I don’t care the political party… will get away with cutting Social Security, Medicare or Medicaid benefits. Don’t try it. This warning goes double for Democrats. We will never forget. We will never forgive. And we will never stop working to end your career.”

The Can Kicks Back launched a bus tour of college campuses. They wheeled out in a vehicle produced by German automaker BMW, ingeniously dubbed the “AmeriVAN.” As part of the tour they collected tin cans. America’s youth was so underwhelmed that, according to leaked e-mails, the pricey project “generated 800 cans through our national tour at a cost of about $3,000/can.” Priceless.

By this point the Netroots were fully engaged with Fix the Debt. When the group staged its first Twitter Q&A it was royally trolled by knowledgeable critics, including one who asked, “Global warming will reduce the availability of ice floes to push the elderly out to sea, does Fix the Debt support a carbon tax?” And a merry pirate prankster named Alex Lawson confronted the foam “can man” at a Can Kicks Back press conference. “Aaar!” he said. “Fix the debt, but let me keep my corporate booty!”

In November, congressional leaders went on offense. Senators Tom Harking and Sherrod Brown introduced a bill to strengthen Social Security. Elizabeth Warren took to the floor to declare that the tide had changed. Unions rallied their members to flood Congress with calls, and Progressive Change Campaign Committee, Move On and others gathered millions of signatures for petitions (while at 360,000, Fix the Debt fell far short of its 10 million goal).

In a major embarrassment, the anonymous @DeficitHacks caught Fix the Debt ghost writing bogus op-eds for students in newspapers across the country, prompting scathing editorials from offended newspapers and a Krugman piece “Fix Fix Fix the Debt Debt Debt.”

In December, the Ryan-Murphy bipartisan budget deal was signed. Press singled out Fix the Debt as one of the “biggest losers” of the deal which largely left Social Security and Medicare untouched. Fix the Debt “spent at least $43 million to influence the conversation. Its reward: “bupkis” wrote Slate’s David Weigel.

State of the Union Reversal

In January 2014, the president made only cursory mention of the deficit in his State of the Union address. At one point he boasted that it had been cut in half; at another he suggest that immigration reform would reduce it even further. This was a far cry from the January 2013 State of the Union, when President Obama gave deficit reduction top billing.

Maya MacGuineas, who raked in $370,419 at the height of the campaign, was left grasping for straws. The debt she says “is slated to continue to grow unsustainably later this decade.”

Fix the Debt had failed in its quest for a Grand Bargain. Now as it sheds staff and packs up its talking points and tin cans, Politico reports that The Can Kicks Back is in debt and waiting for a new Daddy Warbucks to rescue it.

There is no doubt that the Peterson Youth will be back one day and MacGuineas will continue her crusade at the Peterson-funded Committee for a Responsible Budget, but in the meantime the fight to strengthen Social Security is on and that is something Americans can really get excited about. According to the latest polling, 74 percent of Republicans and 88 percent of Democrats want to strengthen the program without cutting benefits.

The question now is whether President Obama will recognize this turning point as he puts the finishing touches on his new budget and whether Democrats will abandon austerity talking points and focus on an agenda that begins with an expansion of the programs that aid and grow America’s middle class.