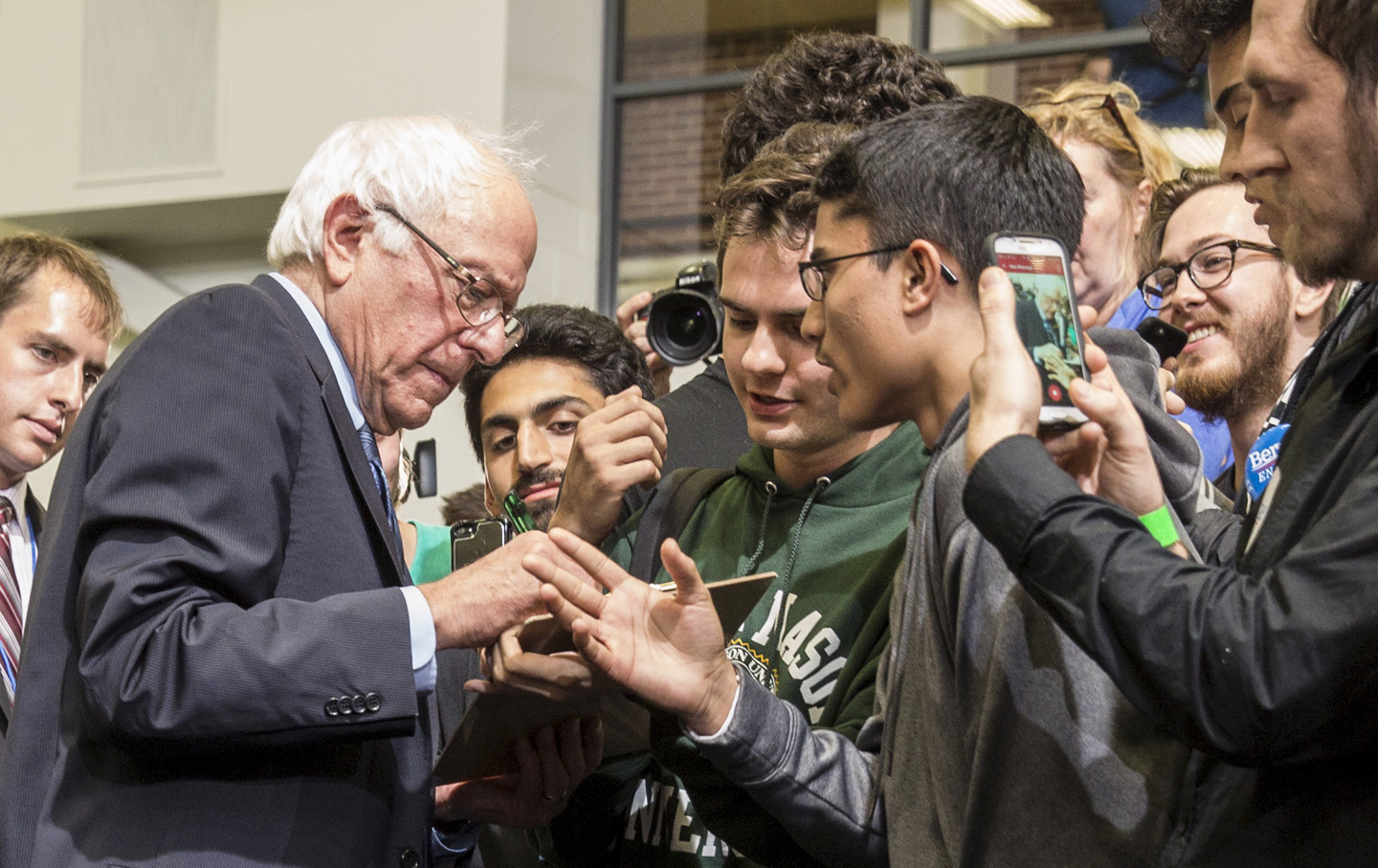 Before this primary season, the Democratic Party’s national platform had not been contested since 1988, when Jesse Jackson offered amendments on military policy, health care, and education, and introduced rules to diversify the party. The 1984 DNC witnessed four hours of platform discussion, which was nothing compared to the 17 hours of heated debate in 1980 over Jimmy Carter and Ted Kennedy’s fundamental split over unemployment and inflation.

Bill Clinton’s “third way” platform in 1992 marked a rightward sharp turn from the Democrats’ New Deal agenda of tax and spend, social safety nets, and full employment, toward one of small government, personal responsibility, and market-driven growth and investment. Since then, Democratic platforms have gone unchallenged, and the convention itself has functioned as a spectacular coronation. Barney Frank said as much when he branded the platform (in an interview with Slate) the “Miss Congeniality” of the convention process. Frank worked on the 2012 document, but the process was so boring, he intimated, that he couldn’t recall what was in it.

But this year, Bernie Sanders broke that consensus by reviving the New Deal of FDR Democrats. Hillary Clinton, of course, went on to win the majority of delegates. But heading into Philadelphia, she still needs to win over a significant portion of Sanders’s base supporters. Sanders was clear early on that his campaign aimed to fortify a grassroots movement, not himself as a candidate. He identified the platform as a way to register the Democratic Party’s commitment to a progressive agenda—a kind of peace treaty between the DNC and the political revolution, but also an historical marker of dissent from the party’s neoliberal agenda.

I served as the Vermont representative to the platform committee at its two-day meeting in Orlando this past weekend, along with 186 other representatives from around the country. The committee included 25 members named by the DNC; the remaining seats were divided between Clinton and Sanders supporters, with the Clinton campaign appointing the majority. We were charged with amending the already drafted platform with input from around the country. Since more than 200 amendments were submitted, the campaigns worked in back rooms to negotiate some amendments into noncontroversial “manager’s amendments.” To be frank, the experience was part NBA final, part Weber’s iron cage of bureaucracy. The tedium of the rules of order and minor amendments was broken up with grandstanding on contentious issues and elaborate presentation of “unity amendments” before C-Span’s public eye and a fired-up gallery.

To be frank, the experience was part NBA final, part Weber’s iron cage of bureaucracy.

Among the unity amendments was a Sanders-Clinton compromise on education that included free public higher education for families with income of up to $125,000 a year. Having campaigned on free higher ed as a counterpart to universal health care, I was ambivalent. On the one hand, the $125,000 cutoff meant that some 83 percent of American families would get free tuition. On the other hand, it tainted Sanders’s elegant College for All with means-testing. In the end, the negotiated language made no mention of the cap, so I was pleased to stand with AFT President Randi Weingarten to present the amendment: “Every student should be able to go to college debt-free, and working families should not have to pay any tuition to go to college.”

The result was similar for health care. A unity deal was announced that called for increased funding for community health centers and the National Health Service Corps, and expanding Medicare. National Nurses United had lobbied hard for a single-payer amendment, and, despite the unity deal, their union rep delivered a spirited speech in favor of Medicare for All—to which gallery chanted rigorously “single-payer now!”

The Trans-Pacific Partnership (TPP) was another story, as Representative Elijah Cummings made it clear during the drafting process that the party did not want to “embarrass the president” on his premier issue. AFSCME president Lee Saunders introduced an amendment to strengthen the platform against bad trade agreements—to which former NAACP head Ben Jealous followed up with a second-order amendment. Jealous called for the party to state its opposition to the TPP unequivocally. After that was voted down, Jim Hightower delivered a namesake amendment (“the Hightower Amendment”) in his classic spit-fire language—fingering the TPP as “a little shop of corporate horrors” and offering his amendment as “political Viagra to stiffen the spine of our party.” Hightower warned DNC brass that Trump plans to include anti-TPP specifics in the GOP platform. Then he and Sanders’s 70-plus members held up boxes marked anti-TPP to signify the 700,000 signatures they collected on a petition opposing the trade deal.

Sanders’s foreign-policy amendments were no less notable. His list of 12 “priorities” included reducing spending on nuclear weapons in what’s fast becoming a new arms race. The US government is projected to spend $1 trillion on “modernization” over the next 20–30 years, which, experts argue, is being read by Russia and China as an act of provocation. Hillary Clinton had not taken a position on this aspect of nuclear proliferation, but her assent to platform language against the $1 trillion program runs counter to President Obama’s current position.

The Sanders side also introduced language to temper the document’s saber-rattling against Iran. Maya Berry of the Arab American Institute introduced the amendment, and together we argued that the party should affirm its commitment to diplomacy, instead of echoing the “reckless warmongering” of Trump and neocon Republicans. Berry also joined with Cornel West to speak truth to power against the occupation of Palestine and for humanitarian assistance in Gaza. The Institute’s co-founder, James Zogby, argued the same during the drafting process, and to strike from the document a gratuitous attack on  the Boycott Divestment and Sanctions (BDS) movement. Berry emphasized in an e-mail to me the nonviolent, Gandhian character of the movement, pointing out that “BDS has worked. The human rights of—and justice for—Palestinians are now part of our collective understanding of what is happening in Israel and Palestine. Some in the DNC can decide to engage in political posturing but honestly, even they know better.” After the amendment to secure the rights of Palestinians was voted down, the room unanimously supported a move to eradicate wildlife trafficking that would have helped save creatures like Cecil the lion.

There’s not enough to space here to further highlight the achievements of the committee: from a surprise Sanders win on the $15 minimum wage and a pathway to marijuana legalization, to improvements in Social Security and reference to full employment, to financial reforms that would revive Glass-Steagall and institute a financial-transactions tax. A series of unity deals on climate change inched the party closer to renewable energy, and the platform registered the first-ever call to abolish capital punishment.

On unresolved planks like the TPP, members signed minority reports that could be brought to delegates at the DNC in Philly. Sanders decided not to do so, out of concern that it would appear obstructionist. In the meantime, Sanders just endorsed Clinton in New Hampshire, and they’ll tout the platform as “the most progressive platform in the party’s history.” If Sanders secures the top spot in the Senate’s high-profile HELP (Health, Education, Labor, and Pensions) Committee under a Clinton presidency, the new DNC platform will no doubt come in handy.