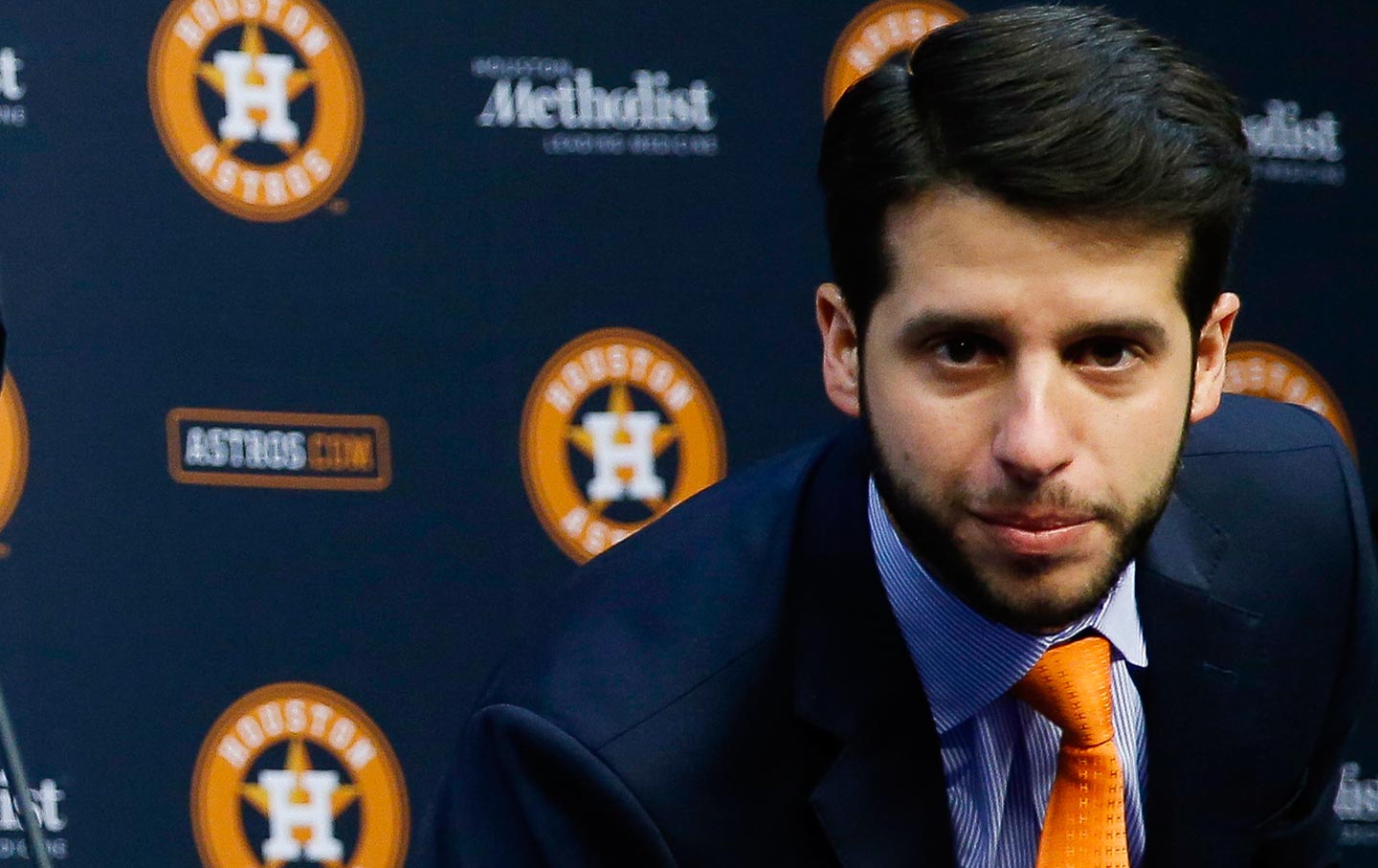 Yesterday, we learned that being the assistant general manager of a Major League Baseball team comes with more responsibility than being a Supreme Court judge or president of the United States. After several days of twisting in the wind, Houston Astros Assistant General Manager Brandon Taubman was fired—with his team right smack in the middle of the World Series.

For those that missed part one of this tale of a pampered child-executive’s Delta House behavior, Taubman shouted a profanity-laden defense of a player on his team, reliever Roberto Osuna, at three female reporters. Osuna had been suspended for 75 games in 2018 for violating the league’s policies on domestic violence. Taubman launched his tirade amid a champagne-soaked clubhouse celebration following the Astros Championship Series playoff triumph over the New York Yankees. According to the account by Sports Illustrated’s Stephanie Apstein and corroborated by numerous people on the scene, Taubman faced three female reporters, one wearing a purple domestic-violence awareness bracelet, and shouted six times, ‘Thank God we got Osuna! I’m so f———glad we got Osuna!’”

As bad as the outburst was the way it was subsequently mishandled by the Astros organization. They started first by denying that it had taken place, slandering Apstein’s reporting. Then as more corroboration came out, they had Taubman issue the classic non-apology apology, where he spoke about his family and the pain of having his marvelous character being misconstrued. Finally, after nearly a week, and after Houston manager A.J. Hinch rebuked Taubman in a manner far beyond the mealy-mouthed corporate boilerplate issued by the team, Taubman was fired.

Truth be told, Taubman is being fired less for the sin of what he did than for the ham-fisted, blinkered idiocy with which the Astros followed up his actions. There is no way he would have lost his job if the Astros had just issued an sincere apology. Of course, perhaps he’d still be employed if Houston hadn’t lost the first two games of the World Series at home to the Washington Nationals, making the team look like they were careening out of control on and off the field.

But this story doesn’t end with the sacking of Taubman. The greater rot surrounding the aftermath of the incident remains. In the press conference announcing his dismissal, Astros GM Jeff Luhnow took no accountability for the initial ugly press release that called Apstein’s reporting a lie, only saying awkwardly that putting the statement together was a group effort.

Luhnow also said during the presser that he hadn’t had time to call Stephanie Apstein and discuss what happened or, heaven forfend, apologize. Meanwhile, Apstein was sitting right there in the room. As Lisa Olson, the legendary sportswriter who endured a high-profile sexual harassment ordeal covering the New England Patriots 29 years ago, tweeted, “Any GM serious about taking accountability—nay, any decent, contrite human—would’ve stood up, looked @stephapstein in the eye and apologized in front of the cameras. He has no idea what she & the other women have endured this week, all for doing their jobs.”

Later in the press conference, Luhnow described Taubman’s rant as “devastating,” but then followed that up by saying, “I wouldn’t wish it to happen to anyone in this room. Just like I wouldn’t wish it on anyone to have to sit up here and answer these questions either.”

In other words, this was a clown show of executives who were caught acting like themselves. If there is something heartening about this entire story, it’s that justice was served only because of all the baseball writers who had Stephanie Apstein’s back, and supported both her account as well has the rights of journalists to do their jobs without having to put up with this bullshit. It actually felt old-school, with the writers showing some old-fashioned solidarity and demonstrating that the old Mark Twain maxim still holds: “Never pick a fight with people who buy ink by the barrel.”