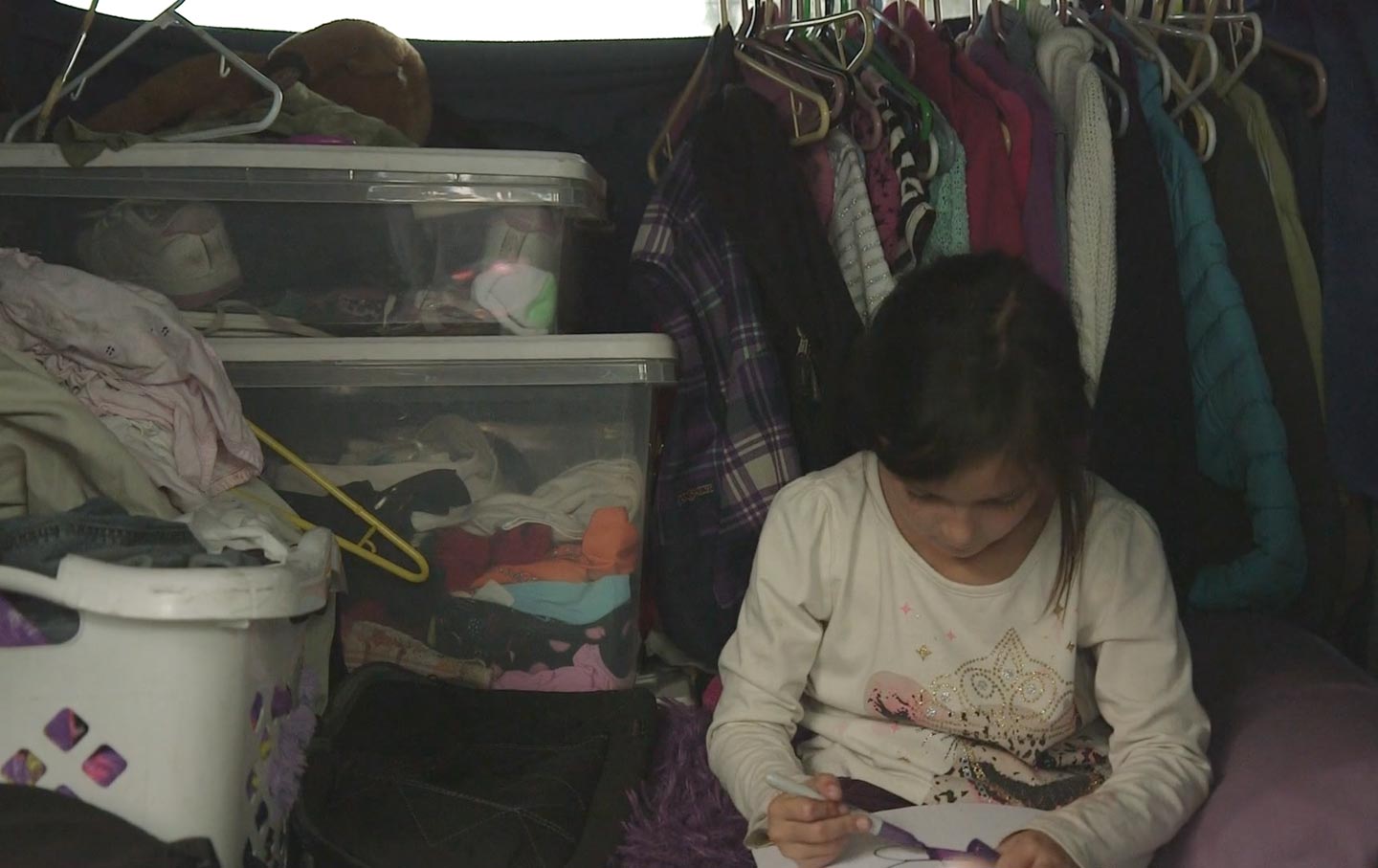 A young girl living with her father out of their van in Santa Barbara, California. (Jennifer Dworkin)

At dusk, Thomas Goodwin, a worn but upbeat man in his mid-50s, drives his car into a parking lot in central Santa Barbara. There, he settles his young daughter to sleep in the back of a second vehicle—a van lined with her clothes—while he dozes in its front seat. The family has been sleeping and living out of the van for almost a year.

This feature was made possible through the generous support of the journalism nonprofits Capital & Main
and the Economic Hardship Reporting Project.

The Goodwins are not alone. In Santa Barbara, over 500 people sleep every night in their vehicles, unable to afford a home with a front door, roof, and bed. They, in turn, are among tens of thousands of unsheltered Californians—men, women, and children from up and down the state who have fallen through the wide cracks in the economy only to land smack on the hard surface of the street.

What are people like Goodwin to do? Twelve years ago, the Safe Parking program, run by the nonprofit New Beginnings Counseling Center, began offering a provisional solution. Its program places those sleeping in their vehicles into 20 private parking lots scattered around the city and provides bathroom facilities and some security. The parking lots are available only overnight and the cars must move by early morning. The group estimates they take 125 vehicles off the street every night and help more than 750 people a year.

The stories that Safe Parking’s clients tell me often involve a catastrophic financial loss precipitated by unemployment, domestic violence, injury or illness and the resulting medical bills. Most are working, although they have often lost secure, decently paid jobs and now struggle to make ends meet with multiple part-time jobs. A growing number of those forced to live out of their cars are families. All have been priced out of a brutal housing market.

Rents in Santa Barbara have skyrocketed in recent years—20 percent in the last year alone—with one-bedrooms priced at $1,500 or sometimes significantly higher. The simple calculus of supply-and-demand is partly to blame. With a vacancy rate below 0.5 percent, a crisis figure, the housing market is at the mercy of landlords. Nor are there enough subsidized units to make up the shortfall for low-income renters—or plans to build sufficient numbers of new ones to meet the need, advocates say. “Santa Barbara’s housing market is broken and has been,” explains Chuck Flacks, executive director of the Central Coast Collaborative on Homelessness.

Santa Barbara isn’t the only city to be touched by the homeless epidemic, of course. The crisis is playing out in many California cities, most visibly in San Francisco and Los Angeles. According to the Los Angeles Homeless Services Authority, homelessness has increased in the last year, with nearly 47,000 people sleeping in the county’s streets and shelters each night; at least 6,000 more live in their vehicles.

Safe Parking and programs like it provide a welcome, if makeshift, port in the storm of homelessness. What families like Goodwin really need are homes: Solid structures with walls, floors, roofs, and beds, which they can leave at whatever time they want and return to at whatever time they want. For this to happen, however, both the city of Santa Barbara and the state and federal governments will have to dedicate significantly more effort to building subsidized homes that the poor and working-poor can afford.

Until then, Goodwin will put his daughter to sleep each night in a parking lot.

Corrections: An earlier version of this article stated that one-bedroom apartments in Santa Barbara are priced at “2,500 and up.” While one-bedrooms can run that high, the starting price for these apartments is lower. In addition, the article stated that city law in Santa Barbara makes it illegal for people to sleep in their cars; however, a decision by the Ninth Circuit Court of Appeals in 2014 overthrew a Los Angeles law making it illegal to sleep in cars. Since that time, Santa Barbara has allowed people to sleep in their vehicles.