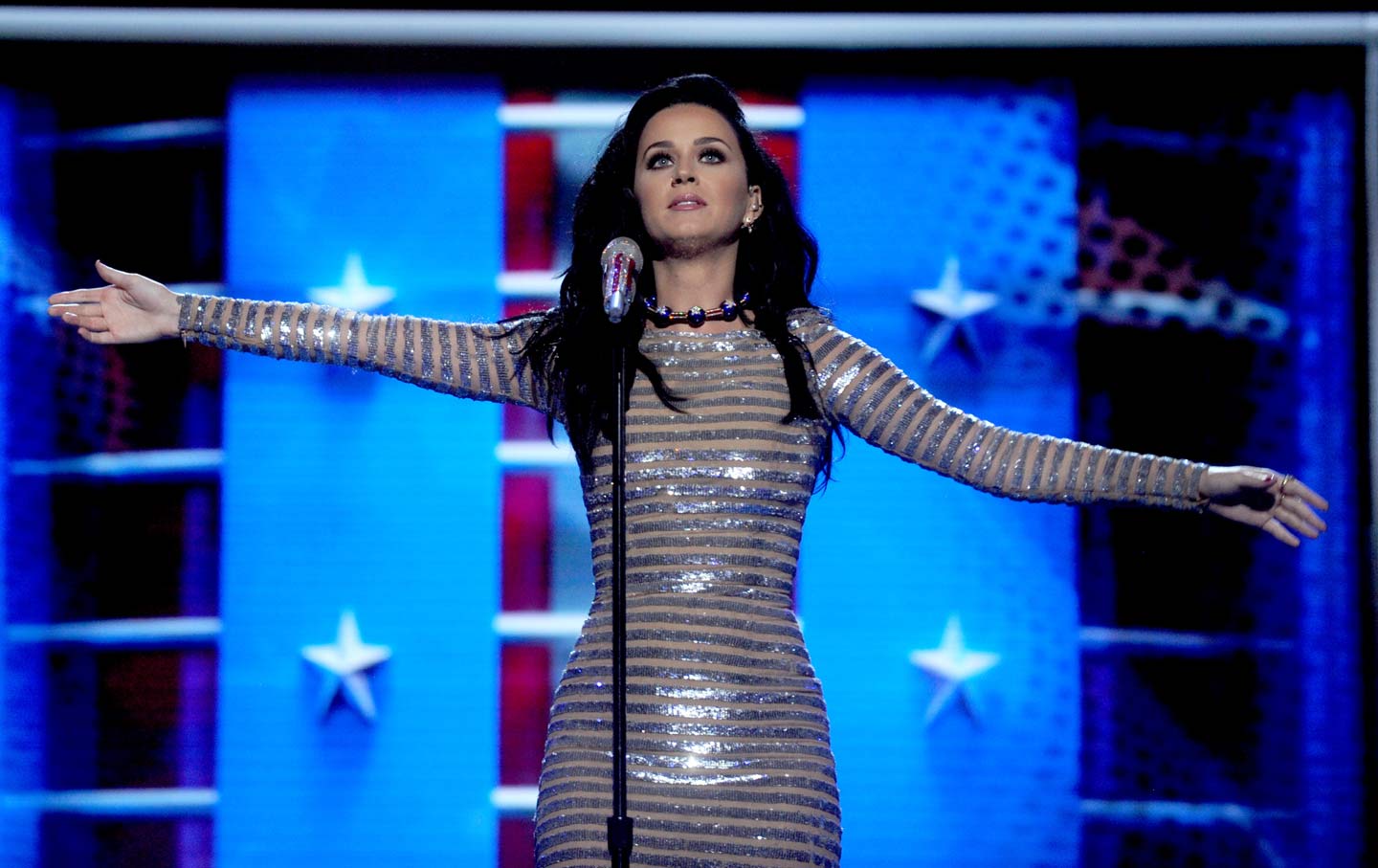 It was clear on the final night of the Democratic National Convention that her critics are right: She’s generic, pandering, too conservative, and terminally indebted to corporate powers.

I refer not to the Democratic presidential nominee, Hillary Clinton, who is actually none of those things, but to the singer whose performance set the stage for Clinton’s climactic acceptance speech, Katy Perry. Looking and sounding as flawlessly beautific as a digital avatar, Perry sang a two-song medley of her 2013 megahit “Roar,” and her companionable new single, “Rise.” The former, an unsubtle anthem of girl/feline power, repositioned Perry as an emblem of adult feminine agency as she aged out of the teen dance-party music that established her as a pop star. The latter, an equally unsubtle anthem about personal triumph, was produced to serve as the theme song of the upcoming Summer Olympics.

Both songs were created by the teams of writers-for-hire and producers who make most pop hits today. According to the credits, “Roar” was written by five writers and producers, including the human hit machine Max Martin and Perry herself; “Rise” is credited a group of four, including, again, Martin and Perry. Both songs are well-manufactured commercial products, created for the mass consumption by experts in the market. They’re irresistibly pleasurable, disposable, and as substantive as the fizz in a freshly popped can of Diet Sierra Mist.

It’s unclear to me what the Clinton campaign thought it could gain by association with Katy Perry on the DNC’s biggest night. Perry has been performing at Clinton campaign events since February, helping significantly to draw crowds. So there was no doubt a degree of favor-trading at play here. No surprise and no harm: Favor-trading is the essence of political compromise, and that’s essential to effective governance. If Bernie Sanders were more adept at favor-trading and more willing to compromise, he might be a more successful legislator.

As Perry acknowledge on stage at the convention, she never finished high school, and neither have a great many of her fans, since they’re not old enough yet. There’s hardly a clear electoral advantage for Clinton in attracting a portion of the citizenry still years away from voting age.

It is possible, of course, that someone in the Clinton camp, perhaps Hillary herself, just really likes what Katy Perry does—or thinks it’s good to be thought of someone who likes it. If so, that’s certainly understandable. Everything about Katy Perry and her music is engineered to be liked, from the fashion-layout hair and outfits to the chirpy, Autotuned sound of her voice—to the degree that we can call it hers after all the digital processing it undergoes, even in live performances. Perry offers nothing other and nothing more than an insistence on her likability.

Watching Bernie Sanders shrinking in his seat on the last night of the convention, one could not help but wonder if he was imagining what could have been, had he won the nomination. He may well have been picturing a different singer on stage—indeed, one whose career has intersected awkwardly with Katy Perry’s. Among Perry’s early hits was a song from 2008 called “I Kissed a Girl,” which happened to be the title of an earlier song recorded and released successfully by the singer-songwriter Jill Sobule in 1995. Identical ideas and titles notwithstanding, the songs were considerably different, Sobule’s a statement of same-sex attraction by an openly gay woman, Perry’s a girls-gone-wild thing, more of a joke. (In the past, I have collaborated on songs with Jill Sobule, but am not currently working with her.)

While Perry was performing at Clinton primary-campaign events, Sobule was barnstorming for Sanders, serving on many occasions as de facto musical director. The two campaigns had competing “Kissed a Girl” girls. At Sanders rallies, Sobule would invariably lead the crown in sing-along to her lacerating topical song, “When They Say They Want Our America Back (What the F#@k Do They Mean).” With the acuity and wit that distinguish most of her work, Sobule traces the whole history of xenophobic panic in the United States:

Before the gays had their agenda
Before the slaves were free
Before that man from Kenya
Took the presidency
Life was righteous, life was so clean
Send them all back, including me

Sobule, who now supports Hillary Clinton, is working now to mobilize other songwriters who are making contemporary music of social or political consciousness. She is developing what she describes as a “communal online space for topical” songs. Called “My Song Is My Weapon,” after quote from Paul Robeson, the project will be “the virtual equivalent of Washington Square Park in the Sixties,” Sobule says.

To date, Sobule has commitments from artists including Amanda Palmer, John Doe, Margaret Cho, Todd Rundgren, and Wendy and Lisa. “My Song Is My Weapon” is now in the crowd-funding stage. For further information, see: www.pledgemusic.com/projects/mysongismyweapon.

Katy Perry has not yet signed on.