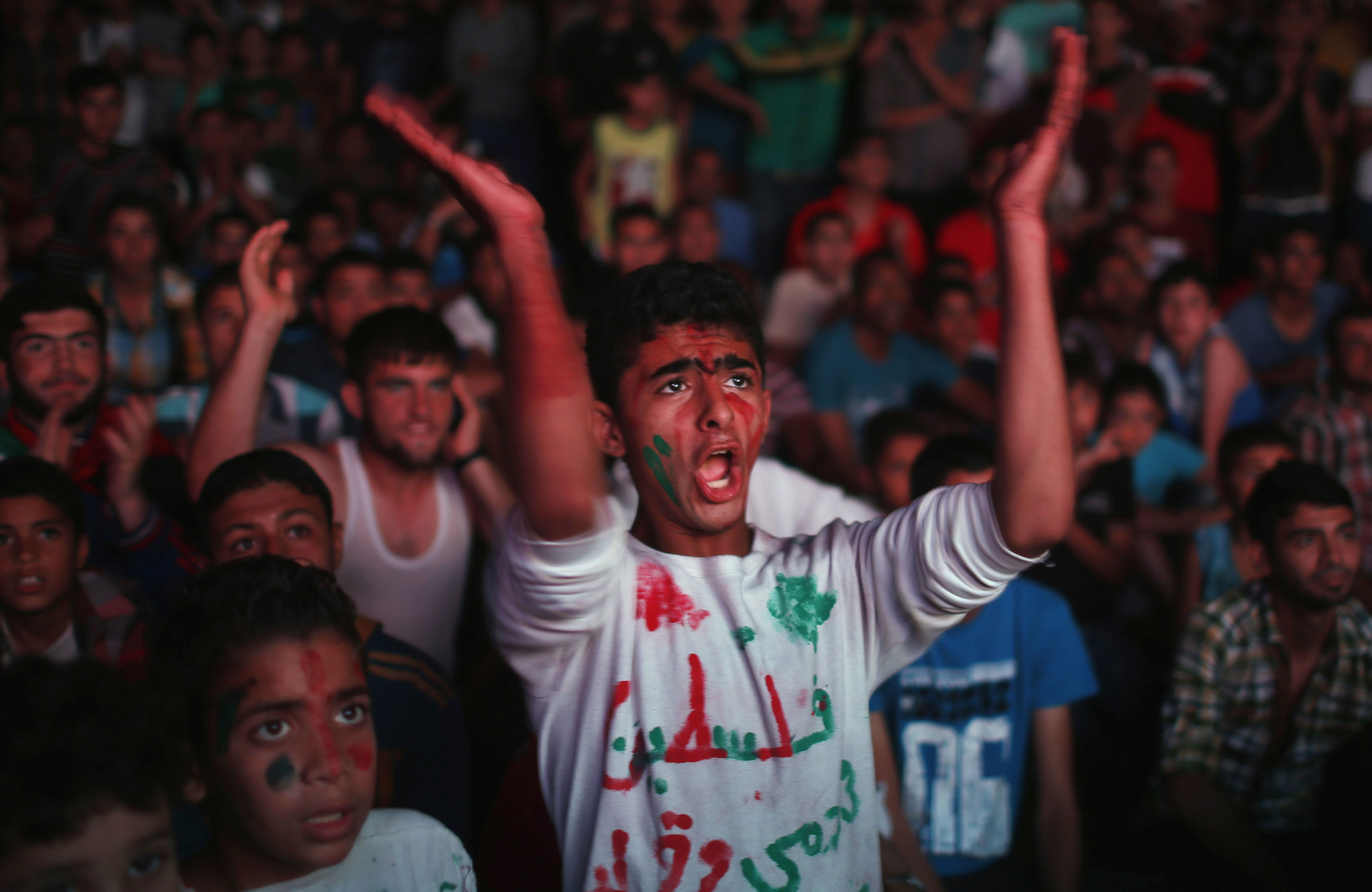 Palestinians cheer as they watch their team play in the AFC Cup final. (Reuters/Mohammed Salem)

If such a scenario sounds like hacky Phillip K. Dick fan fiction as written by Mike Lupica, then you have not been paying attention to the dystopian, genocidal panorama in Gaza, where no one is safe. You are unfamiliar with the name Ahed Zaqout.

Ahed Zaqout was a 49-year-old sportscaster and television host in Gaza, a national sports voice for a people without a nation. Two decades ago, he was a soccer star: the midfielder for the Palestinian national soccer team. On Wednesday, he was killed in his bed by the bombs of the Israeli Defense Forces.

As Gaza sports journalist Khaled Zaher told Reuters, “Palestine has lost one of its best players, he may have been the best midfielder we ever had.”

Why the IDF was “defending” itself against Zaqout is a mystery. He was no Muhammad Ali, using sports to advance any kind of political cause. He was that most conventional and familiar of person in sports: the ex-star jock turned broadcaster. But in Gaza, what we may see as conventional can become political. Zaqout was someone whose voice, sharp wit, and trenchant analysis was a source of joy and escape for a people under constant siege. Providing escape to the trapped of Gaza was in and of itself a political act.

Was Zaqout actually targeted, or did he die in yet another pitiless IDF bombing of civilians? If we believe Netanyahu and his defenders—that the reports by journalists and the United Nations of indiscriminate mass killings are a fabrication—then it is worth asking, Why did Ahed Zaqout have to die?

Based on the description and reports of the bombing, it is doubtful that his was a pinpoint assassination. Far more likely, Zaqout was a victim of Netanyahu’s mania for total war—a mania that makes my earlier Donald Sterling comparison frankly insulting to Mr. Sterling. But if he was in fact targeted, it would be yet another example of the ways in which Israel has attacked the soccer community of Gaza as a way to choke any respite or relief that the people could possibly possess.

Soccer is about people feeling a sense of collective joy and hope. It creates scenes, like the ones in earlier this year—it feels like a lifetime ago—of thousands of people on the Gaza beach celebrating the ascension of their national team.

Attacking soccer is about attacking these very national aspirations. It’s the inhumane act targeting a collective expression of humanity.

Ahed Zaqout should be a part of this debate. Whether Zaqout was targeted or was caught up in an indiscriminate killing should be irrelevant to FIFA. One of their own was killed, and that has to count for something.

A critical voice in this debate is FIFA’s European President Michel Platini. Platini has been sharply critical of Israel yet also has championed the staging of tournaments there over international objections. Platini was also once a great player for the French national team. In a 1994 friendly match between France and the Palestinian national squad, Platini played across a fair-haired whippet named Ahed Zaqout. Perhaps he will remember his name as this debate moves forward.

I know it is stunning to think that FIFA could be any kind of force for social justice, but unlike the United Nations, the United States can’t unilaterally block FIFA’s decisions. And unlike the United Nations, FIFA could do something that would have teeth and that people across the world would actually notice. Perhaps in the face of the bloodshed in Gaza and in the memory of Ahed Zaqout, it will send a message that a country that imprisons another has no place in the world of international sports. If the politicians won’t act, then perhaps the world of sports must. After all, even Magic Johnson just cancelled an event in Jerusalem.