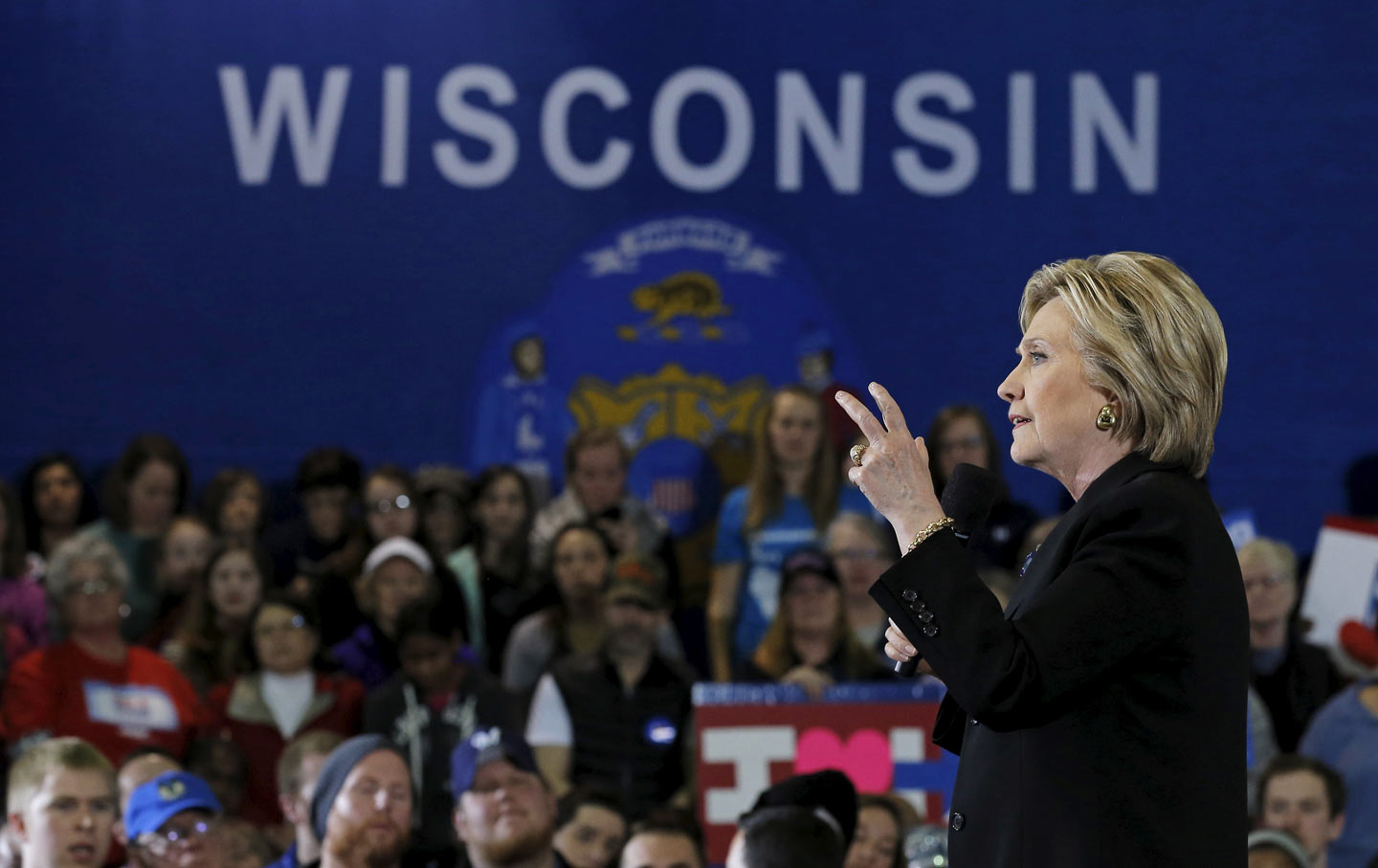 Madison, Wisconsin—Hillary Clinton delivered the strongest speech of her 2016 campaign in Wisconsin this week, and the media barely noticed.

Clinton’s speech on the importance of filling Supreme Court vacancies, and on the values and ideals that should guide judicial nominations, was a deep and detailed discussion of a fundamental responsibility of presidents. What she said impressed not just her own supporters, who gathered Monday to hear her speak on the University of Wisconsin campus, but also Wisconsinites who are undecided or inclined to vote for someone else in the state’s April 5 primary.

Clinton and Bernie Sanders are locked in a tight race in Wisconsin, where the latest Marquette University Law School Poll has the senator from Vermont at 49 percent and the former Secretary of State at 45 percent. They have differences on a number of issues. Yet, they are not particularly at odds with regard to questions about the courts. Both Sanders and Clinton could be counted on to make outstanding nominations to fill openings on the high court, and Sanders has spoken well and wisely about the standards he would apply in doing so.

But Clinton, as a Yale Law School graduate, the author of scholarly articles on children and the law, a former law-school instructor and a former board chair of the Legal Services Corporation, has a long history of engagement with legal issues and the judicial-nomination process. When she speaks about the Supreme Court, she does so with insight and passion.

“(The) Court shapes virtually every aspect of life in the United States...” — Hillary Clinton

That was certainly the case on Monday.

Unfortunately, because the Democratic contest rarely gets the level of attention that the Republican circus does, most Americans got little notice regarding one of the most consequential speeches of the 2016 presidential race.

For the most part, if the speech was covered, the headlines had to do with the portions that referenced a certain Republican contender, as in: “In Wisconsin, Clinton says Republicans have only themselves to blame for Trump.” Or with what she said about a certain Senate committee chair, as in: “Hillary Clinton Calls on Sen. Chuck Grassley to ‘Step Up and Do His Job’”

But the Clinton speech was about a lot more than Trump or Grassley.

It was not even her appropriate observation that, “If we’re serious about fighting for progressive causes, we need to focus on the Court: who sits on it, how we choose them, and how much we let politics—partisan politics—dominate that process.”

What stood out was the way in which Clinton put the current debate over judicial nominations into historical, political and legal context.

Clinton delivered a skillful argument regarding the wrangling over how and when to fill the Supreme Court vacancy that opened with the death of Justice Antonin Scalia:

The death of Justice Scalia marked the end of an era.

Now as you know, there’s a fight over whether President Obama should nominate a replacement, as the Constitution requires. And that fight is revealing the worst of our politics—the same obstructionism that we’ve seen from Republicans since the beginning of the Obama administration, the same disregard for the rule of the law that’s given rise to the extremist candidacies of Donald Trump and Ted Cruz.

It’s corroding our democracy, and it has to stop.

For those of you who aren’t following the saga, the story is pretty straightforward: President Obama has done his job and nominated Merrick Garland, one of the most respected judges in the country, to become the ninth justice. Democrats admire him. Republicans do, too. In fact, a few years ago, when another seat was open on the Court, Senator Orrin Hatch of Utah—who’s not exactly a liberal—said that if the president named Judge Garland, there was “no question” that he’d be confirmed. In fact Senator Hatch called the judge a “consensus nominee.”

Now normally, this is when the Senate would do its job—hold hearings, consider the nomination, call for a vote.

But Republicans say they won’t. They won’t even hold a hearing. It doesn’t matter how qualified the president’s nominee is, or what the Constitution says, or what our country needs.

This is their job! But they refuse to do it.

Senator Chuck Grassley, the head of the judiciary committee, could hold a hearing tomorrow if he wanted. But he says we should wait for a new president because, and I quote, “the American people shouldn’t be denied a voice.”

Well, as one of the more than 65 million Americans who voted to reelect Barack Obama, I’d say my voice is being ignored right now because of their obstructionism.

We chose a president. We chose him twice. And now Republicans in the Senate are acting like our votes didn’t count, and that President Obama is not still our nation’s leader. And I’ll tell you, those are not high-minded principles—they are low-minded politics.

That was an important statement.

What was even more important was Clinton’s explanation of why “this battle is bigger than just one empty seat on the Court.”

“By Election Day, two justices will be more than 80 years old—past the Court’s average retirement age. The next president could end up nominating multiple justices,” she explained. “That means whoever America elects this fall will help determine the future of the Court for decades to come.”

“This Court has voted on the side of corporations—against the interests of workers (and) unions.” — Hillary Clinton

Then Clinton worked her way through the Court’s docket for this term:

* “The Court is reviewing how public-sector unions collect the fees they use to do their work. The economic security of millions of teachers, social workers and first responders is at stake. This is something the people of Wisconsin know all too well, because your governor has repeatedly attacked and bullied public sector unions, and working families have paid the price. I think that’s wrong, and it should stop.”

* “The Court is reviewing a Texas law imposing unnecessary, expensive requirements on doctors who perform abortions. If that law is allowed to stand, there will only be 10 or so health centers left where women can get safe, legal abortions in the whole state of Texas, a state with about 5.4 million women of reproductive age. So it will effectively end the legal right to choose for millions of women.”

* “The Court is also reviewing whether Texas should have to exclude non-voters when drawing its electoral map. That would leave out, among others, legal residents, people with felony convictions and children. The fair representation of everyone in our society—including 75 million children—hangs in the balance.”

* “And on top of all that, the Court is reviewing affirmative action and President Obama’s executive actions on immigration, which called for halting the deportation of DREAMers and undocumented parents of citizens and legal residents. It’s also put a hold on the president’s clean-power plan. Either America can limit how much carbon pollution we produce, or we can’t. And if we can’t, then our ability to work with other nations to meet the threat of climate change under the Paris agreement is greatly diminished.”

“In short,” said Clinton, “in a single term, the Supreme Court could demolish pillars of the progressive movement. And as someone who has worked on every single one of these issues for decades, I see this as a make-or-break moment. If you care about the fairness of elections, the future of unions, racial disparities in universities, the rights of women, or the future of our planet, you should care about who wins the presidency and appoints the next Supreme Court justices.”

Finally, Clinton took on the Court’s biggest failure—addressing an issue that her rival for the Democratic nomination, Vermont Senator Sanders, has made central to his campaign.

Describing “the dangerous turn the Court has taken in recent years toward protecting the rights of corporations over those of people,” she decried the 2010 Citizens United ruling that knocked down barriers to corporate influence on elections.

“If the Court doesn’t overturn Citizens United, I will fight for a constitutional amendment to limit the influence of money in elections,” she said. “It is dangerous to our country and poisonous to our politics.”

Clinton closed by putting the arguments that Democrats always make about the Supreme Court into political perspective—and into language that could resonate far beyond legal circles.

“The Court used to—in the 20th century anyway—protect the little guy against the rich and powerful. More and more, it’s doing the opposite—protecting the rich and powerful against the little guy,” said the former secretary of state. “If I’m fortunate enough to be president, I will appoint justices who will make sure the scales of justice are not tipped away from individuals toward corporations and special interests; who will protect the constitutional principles of liberty and equality for all, regardless of race, gender, sexual orientation or political viewpoint; who will protect a woman’s right to choose, rather than billionaires’ right to buy elections; and who will see the Constitution as a blueprint for progress, not a barrier to it.”