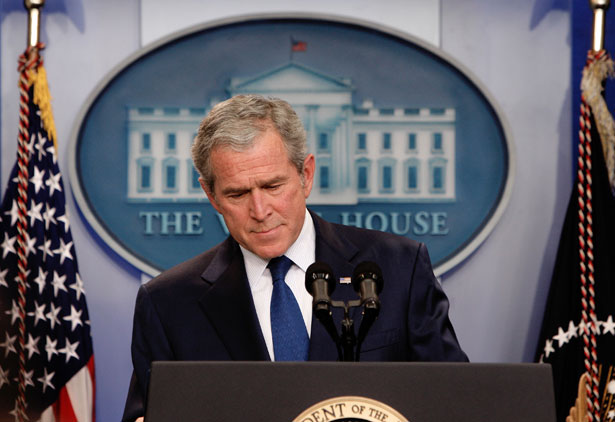 The Iraq disaster remains George W. Bush’s enduring folly, and the Republican attempt to shift the blame to the Obama presidency is obscene nonsense. This was, and will always be, viewed properly as Bush’s quagmire, a murderous killing field based on blatant lies.

This showcase of American deceit, obvious to the entire world, began with the invented weapons of mass destruction threat that Bush, were he even semi-cognizant of the intelligence data, must have known represented an egregious fraud. So was his nonsensical claim that Saddam Hussein had something to do with the terrorist attacks on the World Trade Center and Pentagon, when in fact he was Osama bin Laden’s most effective Arab opponent.

Yet Bush responded to the 9/11 attacks by overthrowing a leader who had banished al-Qaida from Iraq and who had been an ally of the United States in the war to contain Iran’s influence in the region. Instead of confronting the funders of Sunni extremism based in Saudi Arabia, the home of 15 of the 19 hijackers and their Saudi leader bin Laden, Bush chose to attack the secular leader of Iraq. That invasion, as the evidence of the last week confirms, resulted in an enormous boon to both Sunni extremists and their militant Shiite opponents throughout the Mideast.

How pathetic that Secretary of State John Kerry is now reduced to begging the ayatollahs of Iran to come to the aid of their brethren in Iraq. Or that the movement to overthrow the secular leader of Syria, a movement supported by the United States, has resulted in a base for Sunni terrorists in Iraq and Syria of far greater consequence than the one previously used to plot the 9/11 attacks from isolated Afghanistan.

Imagine if Barack Obama had succumbed to his critics’ demands that he supply the insurgents in Syria with sophisticated weaponry? Those weapons would now be turned against the fragmenting Iraqi army that the United States trained at an enormous cost. Or if he had chosen military confrontation with Iran instead of diplomacy in dealing with Iran’s nuclear program, leaving the Shiite leaders of Iraq squeezed between enemies on two fronts. The elected government in Iraq has a chance to survive only because Obama gave peace a chance in choosing to negotiate with the government of Iran.

The only error Obama made in ending the US military role in Iraq was not moving fast enough to disengage from Bush’s nation-building fantasies. Where is the evidence that it ever works, particularly in the Mideast? The United States has backed the military ruling class in Egypt for more than three decades, and the instant the much-hoped-for transition to democracy appeared, those same corrupt generals scurried for safety to the embrace of oil drenched Saudi religious fanatics. Libya’s Moammar Gadhafi is now gone, only to be replaced by militants given to an even harsher brand of oppression. Yet a bipartisan consensus of Washington politicians still believes that the overthrow of the secular leader of Syria is somehow consistent with the proclaimed goals of the war on terrorism.

It obviously isn’t, as the anti-Assad Sunni militants who now freely cross the border from Syria to Iraq waving flags in support of al-Qaida have attested. It is further evidence that dealing with terrorism in militaristic battle terms rather than as a social pathology to be treated as an illness is a dangerous diversion. The war on terrorism is as irrational a concept as a war on cancer or the flu in that it assumes that the military arsenal is the deciding factor when it never is, for long.

The seeds of radical discontent throughout the world, but particularly in the Mideast, derive from myriad complex and intertwined causes. In this region, the obvious sources of tension in religious grievances, stagnant economies and frustrated nationalism—as with the obviously legitimate demands of Palestinians and Kurds—have been wildly exacerbated down through the centuries by the imperial ambitions of non-regional actors. Those prisoners of imperial hubris always underestimated the resilience of the occupied and came to believe their own lies about being crusaders for enlightenment.

That is a dangerous delusion energetically asserted by the Paul Wolfowitzes and Dick Cheneys even now, as their mad schemes for a reinvented Mideast spectacularly disintegrate. In their minds, it is still deeply felt that if only Obama had stayed the course of occupation, we would be greeted as liberators, while our corporations quietly sucked up their oil.

Presidential candidate Obama made clear his contempt for that neocon pipe dream. Once elected, in regard to winding down the Iraq War, he has not strayed far from that conviction, and on this he much deserves our support. This is so even if it means going through the next decades of our political life arguing about “Who Lost Iraq?” the way we once argued about “Who Lost China?”—ignoring that neither country was truly ours to lose.