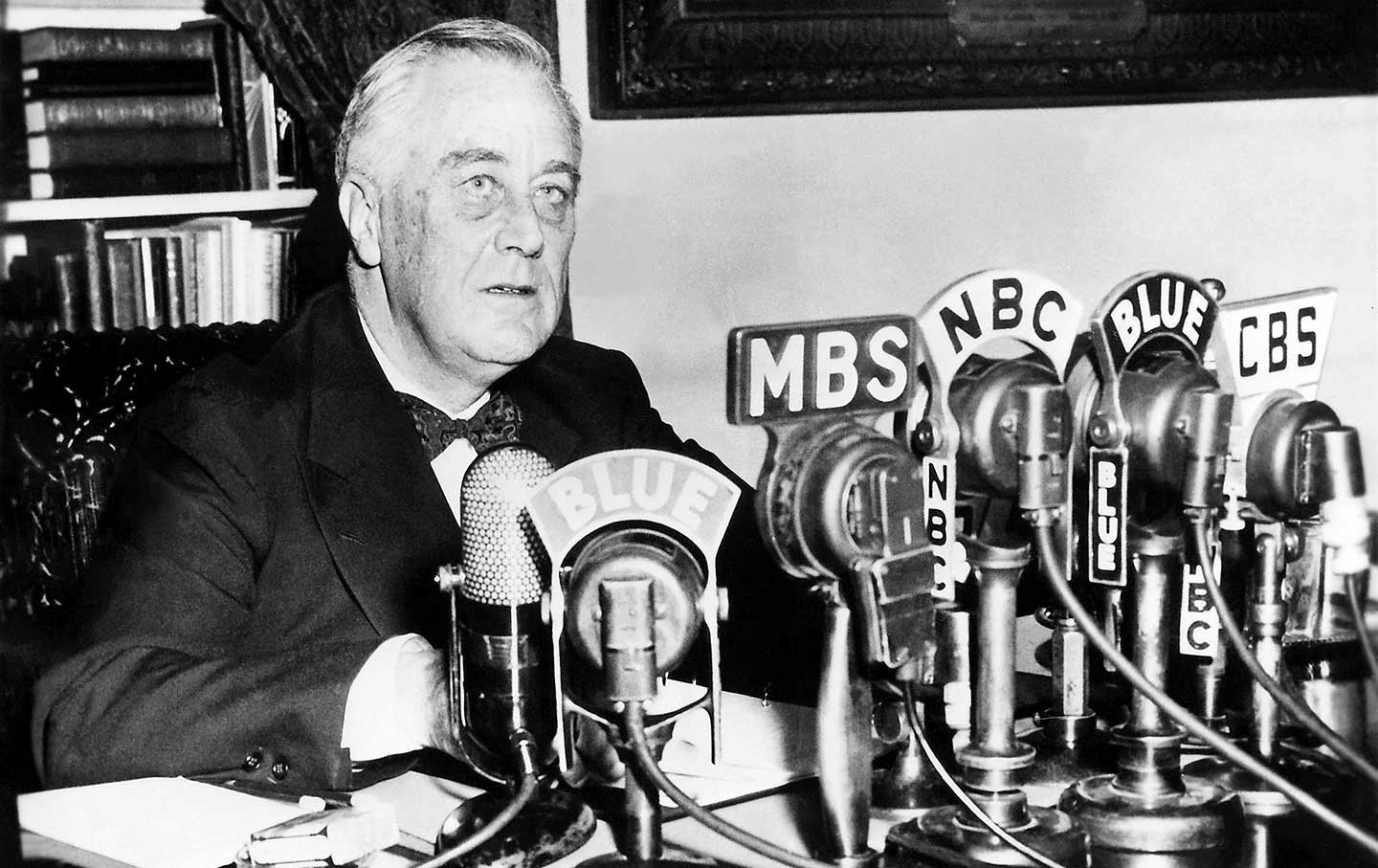 Seventy-five years ago today, President Franklin Delano Roosevelt used his State of the Union address to declare that the government should guarantee a basic floor of well-being. Political rights alone could not assure “equality in the pursuit of happiness,” he argued. “True individual freedom cannot exist without security and independence. Necessitous men are not free men.”

FDR was calling for a second Bill of Rights—an Economic Bill of Rights—that would include the right to employment, housing, education, health care, and an economy free of unchecked corporate and monopoly power.

Last week, we watched more Democratic candidates sworn into Congress than any time since 1974—a blue wave propelled by ideas that echoed policies articulated by FDR. For too long, the Democratic Party had deemed such notions—universal health care, free college, a jobs guarantee—as too big, too risky, even too socialist. Now the party, and the left more broadly, is taking its cues from, and in turn inspiring, an American electorate that wants bold solutions to the instability and insecurity facing so many families.

While daring ideas are moving into the left’s mainstream, they are still mostly piecemeal attempts by individual candidates. When we debate them, we rarely acknowledge that we are really grappling with a decades-old question: Is it time for America to finally recognize that meeting basic material needs is a human right? In other words, is it time for economic rights to be at the forefront of the progressive agenda? We believe it is.

Framing issues in terms of economic rights would further embolden the left, not only by changing what we should expect and deserve from the government but by providing connective tissue across a range of progressive policies. As we approach the 2020 presidential campaign season, there is currently no concept that explains how candidates’ ideas relate to one another or why the moment demands not just one or two of these policies—not just a federal jobs guarantee or affordable college or universal health care or a Green New Deal—but all of them and more. This moment demands a framework for upending the structures that are driving inequality today. An agenda focused on realizing economic rights could do just that.

The conditions to which FDR was responding in 1944 are not dissimilar from those in which we currently find ourselves. Neoliberal policies have driven economic inequality to pre–Great Depression levels, with communities of color and women shouldering an outsized burden. The consolidation of corporate power today is at a scale we have not seen in over a century, and workers are feeling disenfranchised and powerless. These trends have arguably sown the seeds of fascism, which are germinating in Europe, Latin America, and even here in the United States, much as they did in Germany in the 1930s.

Over the last few decades conservatives (and many liberals) have peddled a story of personal responsibility, insisting that hard work and hard work alone should lead to economic prosperity. But it is those who have worked hardest who have been left behind, and it is the rich and powerful who created the rules that allowed them to hoard the profits and power. These economic rules have exacted pain on white working- and middle-class Americans, many of whose families had once achieved economic security thanks to FDR’s New Deal. But these same rules are intertwined with racist and gendered criminal-justice and welfare policies that have exacerbated historical injustices and harmed communities of color.

Since the late 1970s, the notion that government is there to make up for what the market doesn’t do well has been almost unchallenged in policy circles. But the concept of economic rights shifts that paradigm, putting the responsibility on government to do what should not be left up to the market at all. Conservatives believe that the government has no business guaranteeing safety and stability for its people, but with an economic-rights framework, Democrats can push back and embrace the potential for the public sector to provide for everyone’s needs. The solution is not to do away with government; it’s to fortify the parts that work well and invest in innovative and expansive ideas that make it work better for everyone, especially those it has historically left behind.

Democrats should seize upon this moment, not only to embrace the vision of economic rights as articulated by FDR, but to expand upon it so that it can serve as the foundation for a policy agenda that will address inequality in all its forms. The present-day version of economic rights needs to be inclusive and acknowledge that the fights for race, gender, and economic are inextricably linked.

As our colleagues Darrick Hamilton, Sandy Darity, and Mark Paul argued recently, a new Economic Bill of Rights must also include the right to sound banking and financial services, a safe and clean environment, and a meaningful endowment of resources as a birthright. It should also include a broader conception of public goods, one that explicitly tackles persistent gender inequality by guaranteeing paid sick and family leave, affordable childcare, and comprehensive reproductive-health-care access.

As we argue in our book The Hidden Rules of Race, a real progressive economic agenda must be shaped by a set of guiding principles that reckon with our history of race and gender discrimination—discrimination that FDR’s own administration perpetuated—and that acknowledge the ways that trickle-down economic policies have hurt everyone but those at the top. That agenda must also acknowledge how previous and current universal policies—those that on their face appear accessible and beneficial to all—have historically excluded women and people of color (both implicitly and explicitly). Progressives must move toward targeted universal policies that are designed specifically to include those who have been excluded, but also have the promise of benefiting all. Lastly, Democrats need to stress that who writes the rules matters and that means we need to expand access to our democratic institutions. Championing campaign-finance reform, protecting and expanding voting rights and access for all citizens, and ending partisan gerrymandering are the basics of an inclusive democracy, which ultimately nourishes an inclusive and thriving economy.

We’ve been led to believe that achieving equity requires sacrificing economic prosperity, that we cannot afford a New Deal–style effort. But the question should not be how can we afford bold progressive policies but how can we not afford them? Take a good look at where we are today. The economic system of the last 40 years has only made the rich and powerful richer and more powerful. We know from experience that economic inequality is dire for our economy and society; by contrast, greater equality has the potential to grow our economy, foster more stable communities, and be more sustainable for our environment. .

The Democrats have a strong moral and economic argument to make by embracing the concept of economic rights. Expanding public investments so that everyone has their basic needs met would make our families and our nation—and the global community more broadly—healthier, stronger, and more stable. Democrats today have a unique—and likely fleeting—opportunity to deliver where FDR fell short and propose an inclusive New Deal–style agenda that centers economic rights for all.