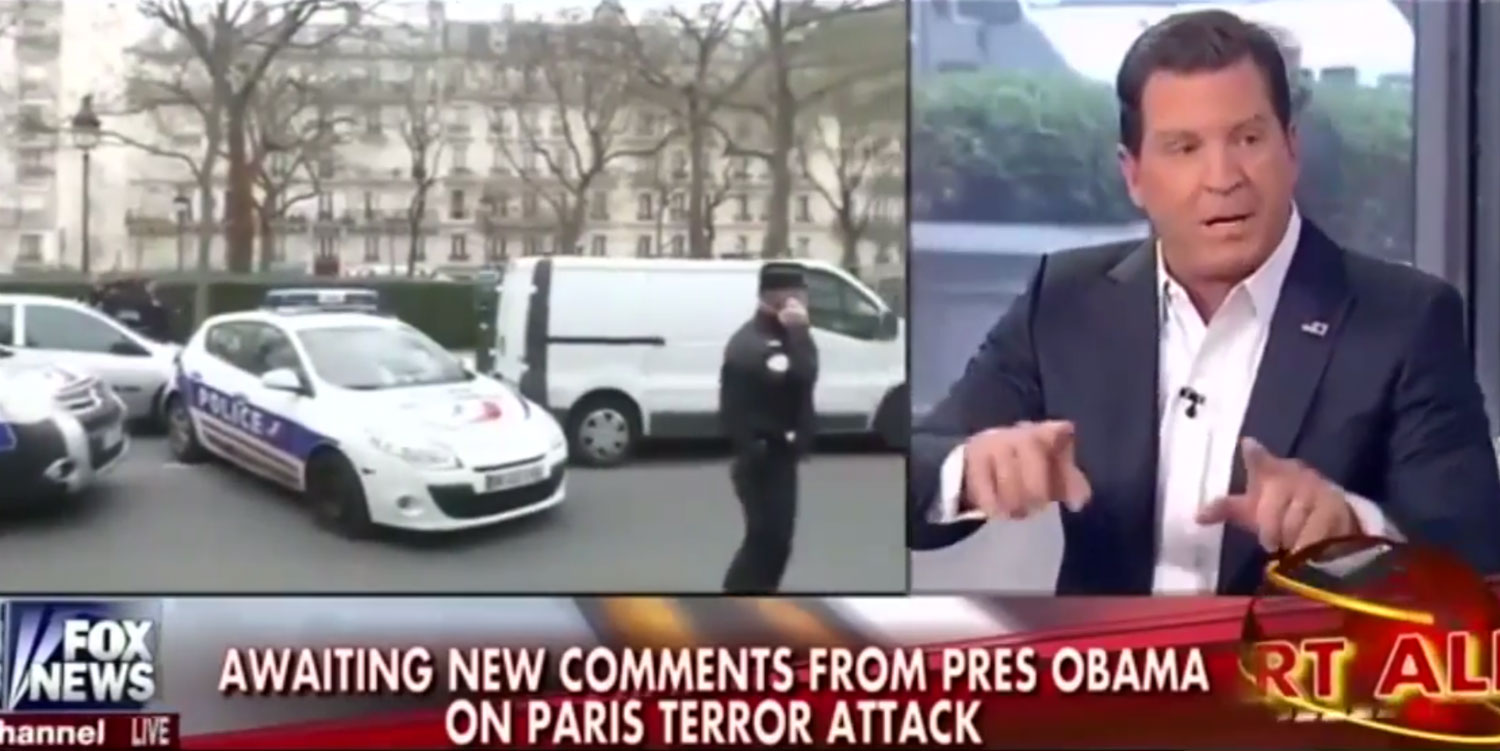 Fox’s Eric Bolling called for the police to “over-militarize” in response to the Charlie Hebdo attack. (Image via Fox News)

My first thought on hearing about the killing of at least a dozen Parisians at the satirical newspaper Charlie Hebdo—including editors, cartoonists and one cop shot on a sidewalk, execution-style, in front of cellphone cameras—was that Bill Maher will feel even more justified in denouncing Islam as a violent religion, the eloquent counterarguments by Reza Aslan and others notwithstanding. The murders were an attack not just on journalism but on comedy itself, not unlike the hacking of Sony over the cartoony Seth Rogen movie The Interview.

My second thought was, “Will journos and comedians now need bodyguards?” Unfortunately, they already do—one of the cops killed Wednesday had been assigned to protect editor Stéphane Charbonnier because of Charlie’s previous cartoons lampooning the prophet Muhammed and jihadist terror groups. The offices were firebombed in 2011 because of Charbonnier’s fearlessness.

Third thought: “How will Fox cover this?” Will they be torn between hating the terrorists and defending the “surrender monkey” French? Will they somehow connect this to the two cops killed in New York and blame Mayor de Blasio and protesters around the country who marched against police violence? Nah, they can’t manage that, can they?

But you can always count on Fox. Within hours of the breaking news this morning, host Martha MacCallum and New York Post columnist Michael Goodwin were throwing the Paris attack and the NYC story into the same blender. After the Ferguson and New York protests, Goodwin said, “police started to second-guess themselves” for fear of being unjustly blamed or worse, killed, for acting too aggressively. The cops, he said, were like journalists who “censor themselves” for fear of being attacked.

Martha nodded. Whether it’s journalists holding their tongues for the sake of political correctness or cops holding back on choke-holds and shooting unarmed black men, “that makes things a lot softer,” she said.

Fox’s Eric Bolling raised the stakes on Outnumbered, saying, “This should be a test case for New York City and cities everywhere. Here’s the point: there’s a very serious push from the left that the police should not be militarized. We should over-militarize.”

An hour earlier, Fox & Friends had been jumping back and forth between the Paris attack and Obama’s threat to veto the first two bills coming out of the new Republican Congress. Elisabeth Hasselbeck teased before two commercial breaks: “Coming up: Hypocrisy brewing over president’s veto threats?” The idea is to link two unrelated things—terrorism and Obama’s promised veto of the Keystone pipeline—by weaving them into the same time and space. Weave and repeat: it’s simple and effective propagandistic association.

Ultimately, Fox connects everything under a still-larger narrative: you are under attack. Different Fox hosts Wednesday morning went on to tie the Paris attack to the release of Guantánamo prisoners, the Benghazi terrorists who haven’t been apprehended, and the likelihood that enhanced interrogation techniques—i.e., torture—won’t be used on any perpetrators because Obama is just too soft on Islamic terrorists.

On cable news this morning, you did hear the caveat to not blame all Muslims—Bobby Ghozi warned against that impulse on CNN; on MSNBC, White House spokesman Josh Earnest said Islam was “a “peaceful religion.” And even on Fox, a counterterrorism expert said, “Islam is not the definition of terrorism. Far from it.” But he added that unless we start calling it “what it is—radical Islamic terrorism,” we can’t beat them.

In other words, while much of the liberal media are still trying to sort out just what happened and who did it, Fox is already out of the gate incorporating the attack into its ongoing agenda. And no matter whether or not this terrorist assault helps the authoritarian right over here like 9/11 did, in France it will almost certainly boost the Islamophobic Marine Le Pen and the right in the country’s 2017 elections.

As political commentator and Huff Post French editor Philippe Moreau Chevrolet said on Al Jazeera, “The far right doesn’t need to campaign anymore. [The attack] is doing the campaigning for them.”