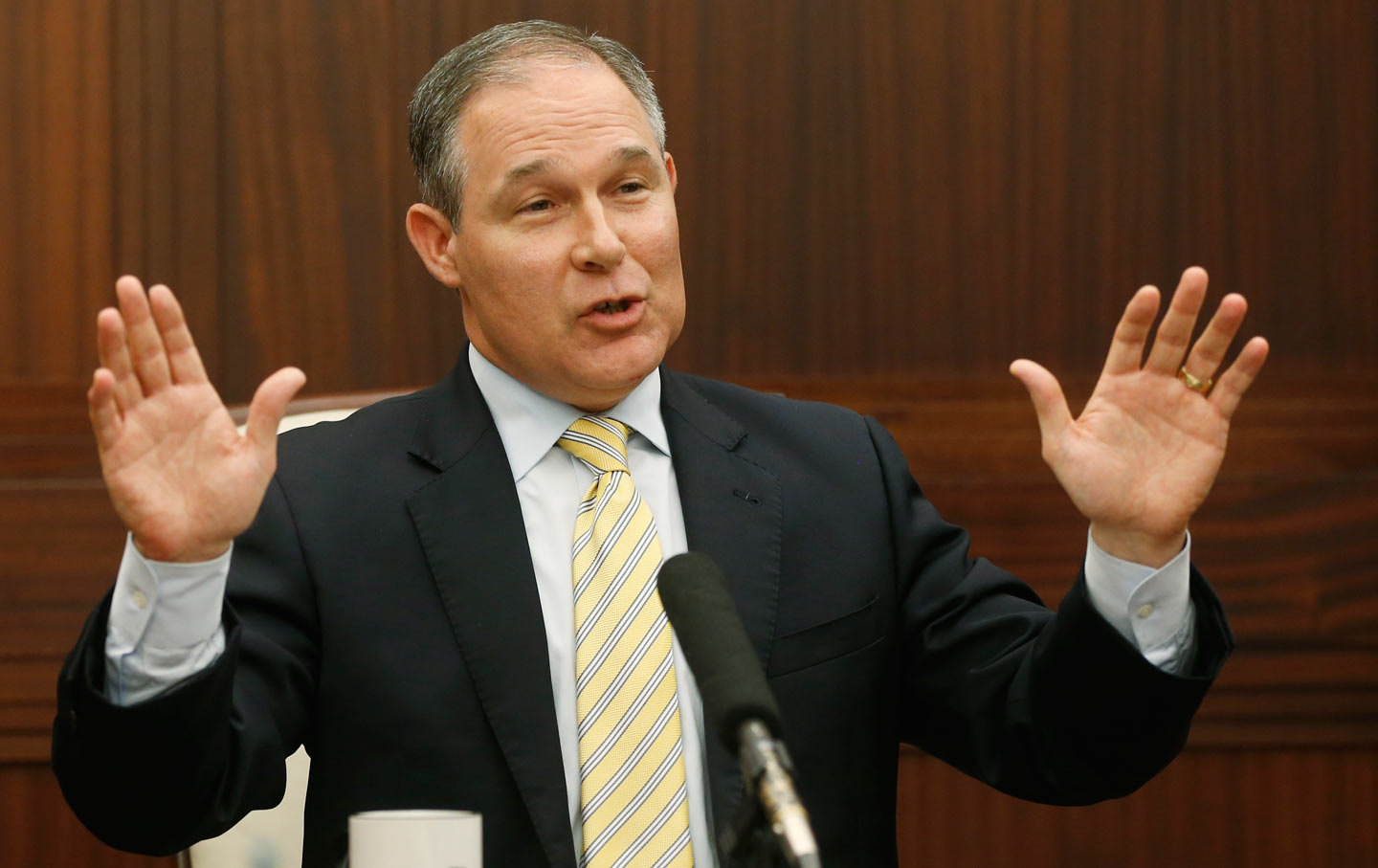 The human tragedy resulting from Hurricane Harvey is also an environmental crisis—and the Environmental Protection Agency, even as it has been disrupted and diminished by the Trump administration, is playing a crucial role in responding to the flooding that has created dramatic new perils for Texans.

Unfortunately, the charlatan who heads the EPA, Scott Pruitt, is spinning discussions about that response to make them fit within the narrow confines of his climate-science denial. As America’s fourth-largest city was under water this week, and as reports mounted regarding environmental threats unleashed by the storms and the unprecedented flooding of industrial and refinery zones, Pruitt’s EPA went so far as to criticize media outlets and scientists who dared to suggest that there are explanations for the epic rainfall, storm surges, and flooding associated with Harvey to be found in climate science.

Pruitt is actually claiming that attempts to explain why the crisis in Texas is so severe are “misplaced,” and to suggest that media outlets ask for these explanations for “opportunistic”—as opposed to journalistic—reasons.

“I think at this point to look at things like this and talk about a cause and effect isn’t really helping the people of Texas right now,” he told Breitbart News Daily. “I think for opportunistic media to use this without basis or support to simply engage in a cause-and-effect type of discussion and not focus on the needs of people, I think is misplaced.”

Pruitt is wrong. The discussion is not “misplaced.” It is timely, and necessary.

Talk about the ways in which climate change influences extreme weather events and increases the risk of damage and loss of life is not controversial in the scientific community. Though scientists continue to study the nature and extent of that influence, they discuss it as a reality. Climate change “exacerbated several characteristics of the storm in a way that greatly increased the risk of damage and loss of life,” explains Michael E Mann, distinguished professor of atmospheric science at Pennsylvania State University and director of the Penn State Earth System Science Center. “Climate change worsened the impact of Hurricane Harvey.”

“There is universal agreement” that global warming boosts rainfall during hurricanes and heightens the risk of severe flooding, Kerry Emanuel, an atmospheric-science professor at the Massachusetts Institute of Technology, told Reuters this week. “If you look at long-term effects of hurricanes on society, the impacts are more about water than wind. Harvey is an example of how vulnerable modern society is to rainstorms as the climate warms. It’s solid physics.”

Unfortunately, Pruitt is not a scientist. He is a career politician with close ties to the fossil-fuel industry—and to the climate-change-denial projects that have been developed by right-wing campaign donors and lobbyists to protect the profiteers. As the scandal-plagued attorney general of Oklahoma, Pruitt faced constant criticism for using his position not just to battle against the EPA but to battle against science itself.

Now, as head of the agency he spent years suing in the courts and attacking on the airwaves, Pruitt is continuing his war on science from the inside. As The New York Times noted just months into Pruitt’s tenure—in an article headlined “Counseled by Industry, Not Staff, E.P.A. Chief Is Off to a Blazing Start”—“Scott Pruitt has moved to undo, delay or otherwise block more than 30 environmental rules, a regulatory rollback larger in scope than any other over so short a time in the agency’s 47-year history, according to experts in environmental law.”

Pruitt has been especially aggressive on climate-change issues, working with Transportation Secretary Elaine Chao and others in the administration to reverse progress made during the presidency of Barack Obama. The new EPA head refuses to acknowledge the most basic conclusions of climate science and has recruited researchers to try to discredit scientific evidence he disagrees with.

Just days after taking office, Pruitt began the process of undoing Obama’s “Clean Power Plan” initiative. When Trump pulled the United States out of the Paris climate agreement, it was Pruitt who was the most enthusiastic proponent for exiting, griping, “We owe no apologies to other nations for our environmental stewardship.” Jeremy Symons, the associate vice president of climate political affairs at the Environmental Defense Fund, told Rolling Stone that Pruitt “wanted all his pals in the fossil-fuel industry to know, ‘Hey, I did this for you. I got this done. I’m the man.’ This was Scott Pruitt’s victory lap.”

But Pruitt did not stop with that dubious “victory,” however. He has remained so ardently at odds with science that he has created a new EPA ethic that includes attacking scientists merely for speaking up on climate-change issues.

It happened again this week, when the agency should have been fully focused on the Texas flooding and the immediate and long-term environmental challenges that extend from it. Reuters reported Tuesday that, in response to a question about concerns raised by climate scientists, EPA spokesperson Liz Bowman announced: “EPA is focused on the safety of those affected by Hurricane Harvey and providing emergency response support—not engaging in attempts to politicize an ongoing tragedy.”

That statement summed up the Orwellian turn the EPA has taken under the leadership of a politician who is more concerned about his ideological obsessions than threats to the planet.

Scientists who discuss solid physics and universally accepted concepts with regard to climate change are not politicizing the agonizing moment in which Texans find themselves. They are offering explanations, and useful cues for how to respond to an era of “super storms.” And they have been doing so in a reasoned, nuanced manner that does not casually blame hurricanes and tropical storms on climate change but that instead points to evidence that hurricanes and tropical storms are becoming more severe because of global warming.

The scientists are dealing in facts, and logic.

They are not “politicizing” the debate.

The debate has been politicized by corporate interests that seek to deny reality—and by an EPA administrator who is so beholden to those interests that he is turning an essential federal agency into an increasingly absurd and dangerous reflection of his jaundiced worldview.