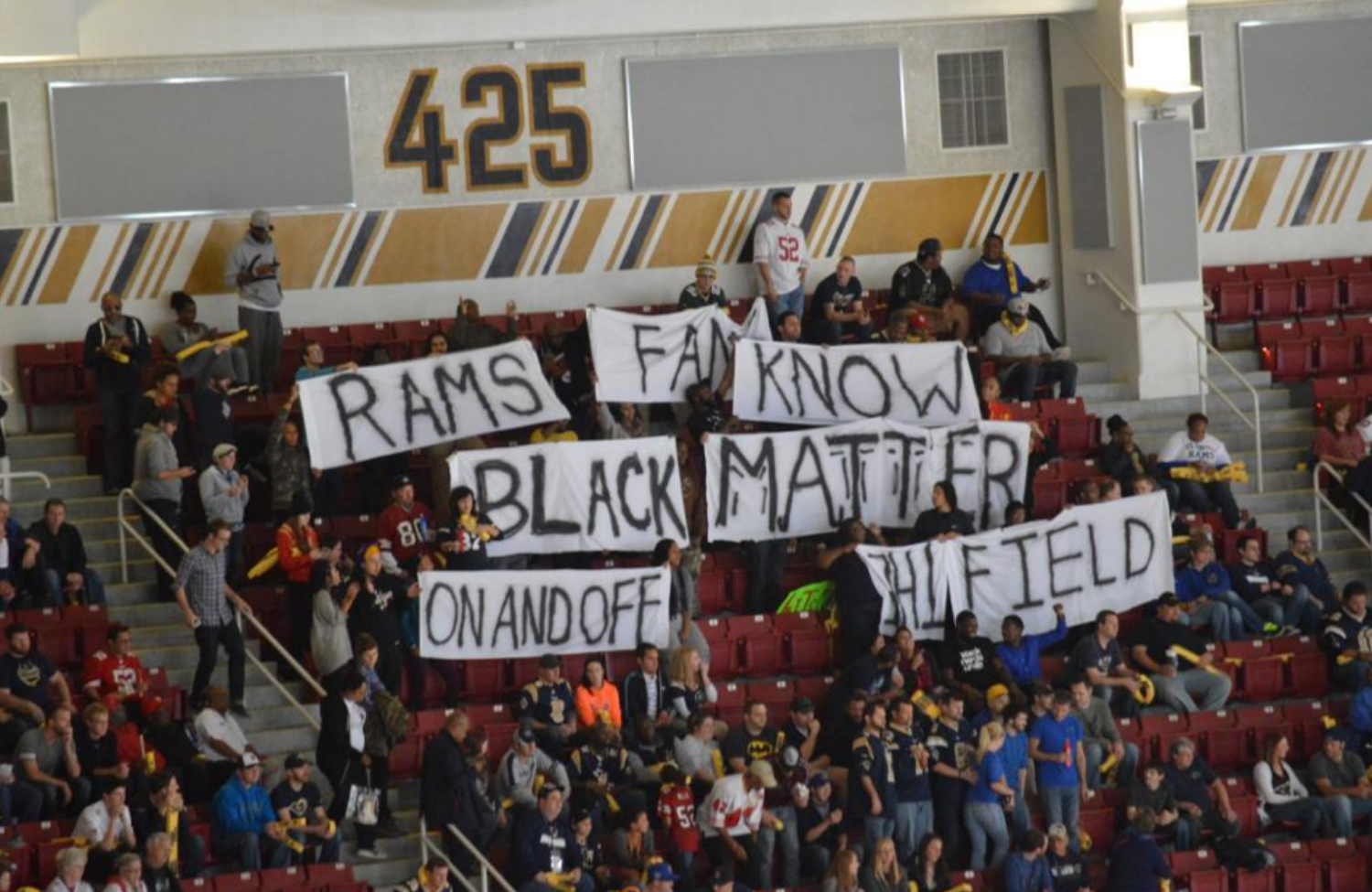 The tradition is as longstanding as it is powerful: fans and even players disrupting sporting events in the name of a greater cause. Sometimes when this takes place, it's iconic, other times it's forgotten. This is usually dependent on the power and breadth of the movements off the field that animate these extraordinary actions.

We saw it most famously perhaps when John Carlos and Tommie Smith raised their fists at the 1968 Olympics. It helped change the world when the people of Australia and New Zealand fans stormed the grounds when Apartheid South Africa's storied Springbok rugby team took the field. It continues today when people protest the Israeli basketball tour of the NBA preseason in the shadow of the Gaza war or when NFL players in solidarity with the family of Michael Brown raise their hands as they leave the tunnel.

That tradition continued last night when, as a part of #FergusonOctober, fifty people in the upper deck of the St. Louis Rams-San Francisco 49ers game unfurled a banner saying "Black Lives Matter On And Off The Field" and held a protest right in the middle of Monday Night Football.

An NFL stadium is a place of constant security, surveillance and inspection. Getting inside the White House with a knife seems like an easier task than entering an NFL arena for a protest. Yet in St. Louis, they did it and sent a strong message that this was not a time for games.

Stadium protester Shannon Wilson said, "We chanted in protest to tell the world that Rams fans know that black lives matter. Some Rams fans who sat in front of us ignored us at first. When our cries for our lives grew louder, some men began to dance as if to imitate monkeys, and shouted, verbatim, 'Shut the f*** up you monkeys.' I guess some Rams fans don't know that Black lives matter."

Sorry to inconvenience the 3rd quarter, but the wild cheering of African-American athletes who can run fast, and the death and disrespect of Mike Brown simply cannot be separated from each other. Black lives must matter on AND off the field. We witnessed many hateful, hostile, and nearly violent responses from fans inside and outside the stadium. But we witnessed many Rams fans – including many white fans — who joined our protest in solidarity after initial hesitance. It's almost like they needed permission to show their justifiable outrage. Last week the St. Louis Symphony protesters asked 'What side are you on, my friends. That's the question. There are six witnesses, no police incident report, still no arrest, and Mike Browns in every town. This is real basic. There can be no fence-sitting here. Dismantling the Blue Wall of Silence also includes ending white walls of silence.

Thousands were protesting at St. Louis University, Walmart, at the Ferguson police Department, and other places. And that was just one day.

As one stadium protester who requested anonymity told me, "Tonight was a major success. Our message was clear – black lives matter and that means that police violence is an issue no one can ignore, even during Monday night football. Our movement is growing every day and while ESPN chose not to air our major action, we know that many in our country stand with us. We are waiting for our leaders to act."

Yes, it's true that ESPN ignored the happenings in the stands. But it was picked up by mainstream channels like The Sporting News and SB Nation as well as the highly trafficked rebel sports site Deadspin.

At a rally this weekend, Montague Simmons, from the Organization for Black Struggle, told a crowd: "They didn’t value Black lives then, they don’t value Black lives now…. If this moment is gonna be all that it can be, we got to make the cost of Black life too high for them to take it." Actions like last night are a critical part of that process.

Protestor Darnell Moore said, "While waking around the stadium with several dozen others chanting 'Mike Brown' and 'Hands Up Don't Shoot' some fans willfully ignored us or shouted irately because their game was interrupted."

This was a brave action that went down last night. As long as some people in the United States cannot escape the fear of police violence, the escapism of sports is a bubble well worth popping.

Tory Russell, who has been on the ground in Ferguson from the start, said, "What were saying is No Justice, No Peace. You can't go on with life as usual until justice is served. We are fighting all across St. Louis and this is not a game to us."