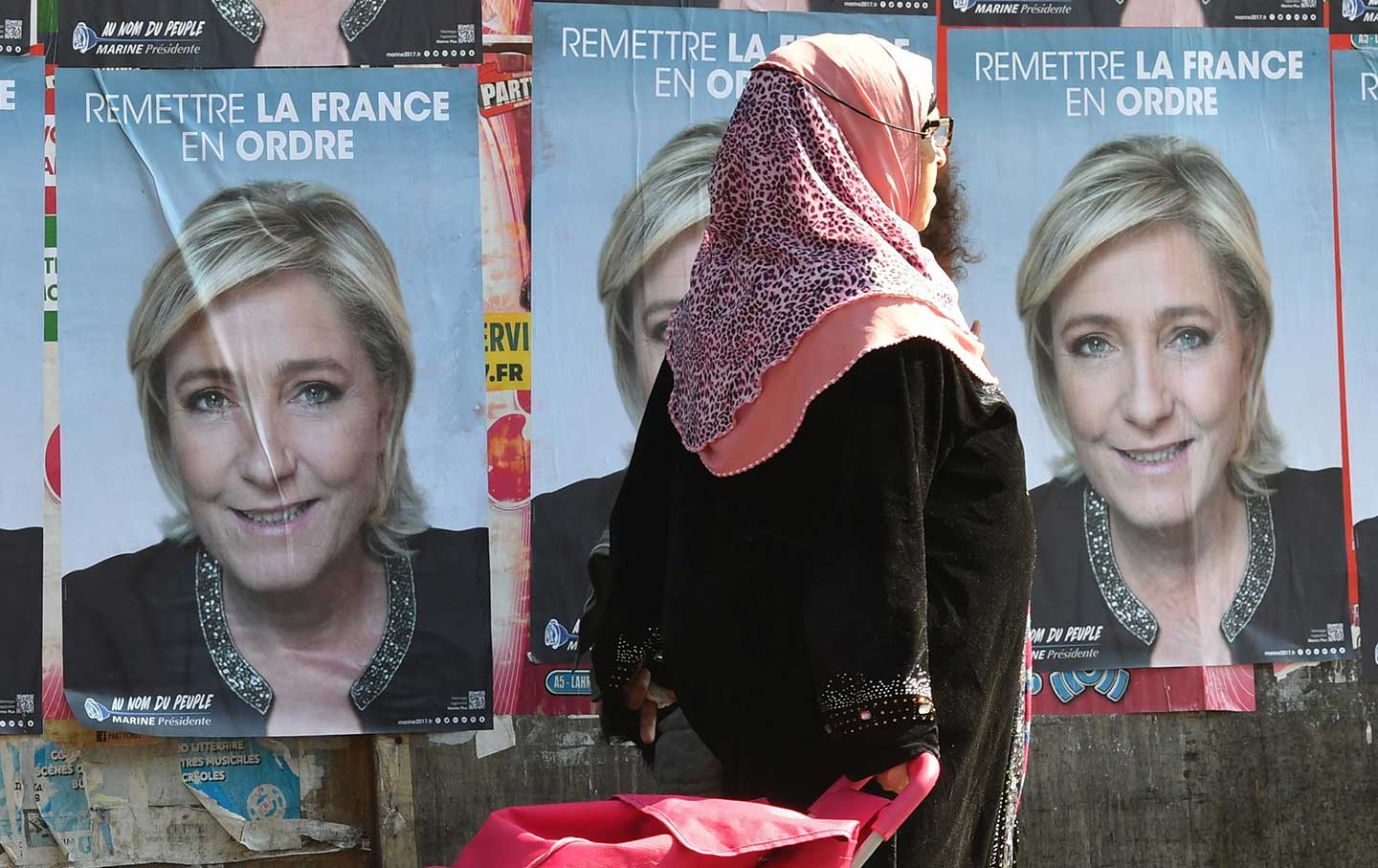 In the fall of 2018, during an interview with Der Spiegel, Nicole Höchst, a member of the nationalist Alternative for Germany (AfD) party, claimed that she was concerned about the future of Germany and the protection of women from radical Islamists and migrants. Alice Weidel, a lesbian leader of the party, alleged that increased migration to Germany has resulted in the lack of protection for women and girls. By proclaiming their motivation for gender equality in racist, xenophobic terms, they are catering to a subsection of women—namely, anti-migrant and anti-Islam ethnic Germans—who are willing to join the AfD. Their goal is to build a larger base to advocate protonatalist policies for ethnic Germans, allege Muslims as a danger for women, and appeal for the increased criminalization of non-German migrants.

“I believe we are the only party in Germany who is really fighting for women’s rights, because we point out we’re in danger of losing the freedoms and rights of women for which we’ve fought for centuries,” Höchst said, referring to state-sanctioned programs for mothers, pay equity, and more public security in Germany.

This strategy of using women’s rights, interventionist natalist policies, and the language of feminism for the purposes of the far right is not uncommon. European liberals, secularists, and right-wing politicians have usurped women’s rights and feminism to encroach upon religious freedom, women’s bodies, and migration under a banner that feminist scholar Sara Farris calls “femonationalism.” During the early 2000s, a number of Western European countries introduced measures to simultaneously criminalize migrants or Muslim women. In July 2002, the Italians passed Law No. 177, which required migrants to be fingerprinted and imposed severe sanctions on undocumented migrants. In France, the banning of the headscarf in public schools in 2004 culminated in the government’s wanting Muslim women to embrace France’s principle of laicité (secularism). These legal structures are some of the many iterations of how an ideological formation built on an anti-migrant and anti-Muslim foundation has become more dominant in European politics.

Femonationalism is also a wellspring for white nationalism, with figures such as the feminist Susan Moller Okin claiming that non-Western cultures are more oppressive to women. Unlike Moller Okin, Rita Chin demonstrates that the “crisis of multiculturalism” is not a product of migrants or ethnic minorities being a detriment to Western society; rather, it is a product of perennial 19th-century legacies of racial nationalism and static notions of what it means to be European—white, Christian, and secular. At the core of these anxieties is what Joan Wallach Scott describes as Western liberal democracies’ perspective through a “racist lens that had justified imperial conquest…[and viewing] mostly Muslim people…not only as different but as inferior.” This has been going on for some time.

As the scholar Gayatri Spivak noted, British colonialists in India justified colonization because they saw themselves “saving brown women from brown men”—which percolates from nationalist and far-right groups in Europe today.

How can we understand these racialized comments in the context of European nationalism? And why is it important to talk about this movement now? At a moment when racist, anti-Semitic, and Islamophobic attacks are on the rise, it’s important to home in on the ways that feminist language gets used to fulfill right-wing populism’s objective of criminalizing migrants, dictating what Muslim women should wear, and deviating from the existing sexist policies in European society.

As this brand of populism has soared in recent years, it has attempted to rebrand itself throughout Europe to appeal to a new generation of voters, notably with Marine Le Pen minimally distancing herself from her father’s campaign by inviting more women and gay people to the Front National party. The rise of far-right parties has generated a litany of self-described feminists who propose nationalist cordoning from Scandinavia to Southern Europe. Adhering to national conservatism, parties such as the Sweden Democrats, Swiss People’s Party, and AfD jettison themselves from centrist parties by championing their burgeoning female members. They hope to do what their predecessors have not: Achieve gender parity in their leadership.

European nationalist parties have developed women’s caucuses. For example, AfD has tried to appeal to women under the leadership of Alice Weidel and Beatrix von Storch with the inauguration of the Frauen in der Alternativ, a working group that aims to increase female voters in their party structure. Some of the members of AfD went so far as to fight for women’s rights through the language of the Me Too movement. Yet they hold many nonwhite women in contempt; their position is entrenched in anti-Islamic rhetoric that then reproduces anti-feminist policies—tied both to productive and social reproductive forces.

AfD leader Dennis Augustin proclaimed Islam “was not compatible with our liberal-democratic constitution” and “Islam is totalitarian.” The party goes even further by claiming that Muslims refuse to integrate, which harps over the ways that Islamic religiosity might be expressed. At the same time, a recent article revealed that Weidel, a prominent leader in the party, hired an asylum-seeker to clean her home.

European political leaders often make scapegoats of migrant and Muslim women without interrogating the ways that sexism gestates in their own society. As Elisa Banfi has noted, countries such as Switzerland have historically instituted burqa bans “in the name of women’s rights,” even though gender parity in electoral politics has not been fully achieved. While Switzerland operates as a direct democracy today, women make up only 30 percent of its house of representatives and 15 percent of the senate.

Across the continent, instead of addressing the uneven political representation and power of women—a demand that could also be directed at the ongoing global gender gap—legislation has fixated on the apparel of Muslim women. One German court prevented a Muslim teacher from wearing a headscarf, which left her temporarily unemployed and reassigned to another institution for work. In France, the anti-hijab discourse is a constantly evolving and mutating obsession. In 2010 the country prohibited the wearing of full-face veils. In 2016 various politicians in France tried to ban Muslim women from wearing swimsuits that covered their entire bodies (popularly known as burkinis).

When European states use legislation to curtail the educational access, job opportunities, and leisurely activities of women who decide to wear the hijab, veil, or burka, they prevent these women from having control over their labor and bodily autonomy. Femonationalism thus operates from a place of cynicism, presenting itself as liberating Muslim women while doing the exact opposite. Far-right and feminist politics should not be equated with each other given that the former aims to have rights for a few, while the latter strives for equality for all. Conservative women are not heirs of feminism; they actively undermine it.

Far-right-party women have upheld oppressive anti-abortion campaigns. In Germany, Article 218 defines abortion as murder, and Article 219a prohibits health-care providers from advertising that they provide abortion services; these are Nazi-holdover decrees that were recently softened but not eliminated. In Poland, anti-abortion groups have described the morning-after pill as an “early-abortion pill,” calling for tighter restrictions on abortions. These accounts are not an anomaly but the standard femonationalist position.

At the core of these positions are European nativist fears that nonwhite European foreigners will replace them—a phenomenon rooted in legal and natalist policies since the early 2000s. Under the Berlusconi regime, the Italian government pioneered the Fondo Nuovi Nati (Fund for Newborns) in 2009 to give subsidized bank loans to new mothers—parents without Italian nationality were initially excluded from those benefits. Poland is giving people money to have more babies, though it is unclear if the universal child benefit can be applied to migrants. However, the ruling Law and Justice party said it was “weary” that the Muslim migrants would reap these benefits.

On the subject of large families, France’s President Emmanuel Macron alleged that uneducated and African women were having “too many children,” even as the French state has long provided subsidies for French parents who choose to have multiple kids. These legal measures and stereotypes signal that not all forms of reproduction are equal.

The history of feminism is full of traditions that have left some women behind. While Clara Zetkin and Rosa Luxemburg advocated for full suffrage and political participation, German feminist Helene Stöcker promoted eugenics “für Hebung der Rasse,” or to “lift up the [white] race.” In the United States, the eugenics movement during the early- and mid-20th century dovetailed with forced-sterilization programs—mostly targeting disabled people, women of color, working-poor women, and sex workers. In her seminal text Killing the Black Body, Dorothy Roberts provides ample archival evidence for how black women were systematically sterilized in the United States. Yet they were not the only ones. Puerto Rican and Native American women were also sterilized, beliefs of Aryan racial superiority serving as fodder for these policies.

Even more egregious is the collection of feminists who defended and continue to defend colonialism. More inclusive feminisms such as from the Combahee River Collective and postcolonial feminists have stepped in to challenge racism and imperialist imaginations, but feminists in positions of political power across Europe certainly aren’t listening.

Challenging femonationalism is not just a question of moral posturing. Rather, it will mean highlighting the ways in which anti-Muslim and anti-immigrant policies and rhetoric, whether implied or explicit, have provided confidence to the far right.

The growing international feminist tradition can provide a direct challenge. In a slim manifesto by feminist scholars Cinzia Arruzza, Tithi Bhattacharya, and Nancy Fraser, the authors excavate the last several years of political struggle to write, “Standing for all who are exploited, dominated, and oppressed, it aims to become a source of hope for the whole of humanity. That is why we call it a feminism for the 99 percent.”

At the same time, the political test over the coming years is to develop open and transparent demands to challenge Europe’s growing far-right movement. As a new generation of feminists and queers are building a movement that speaks to the concerns of labor, migration, health, and incarceration, feminism will have to explicitly distance itself from nationalism. Because femonationalism has nothing to do with feminism and everything to do with ethnic nationalism.