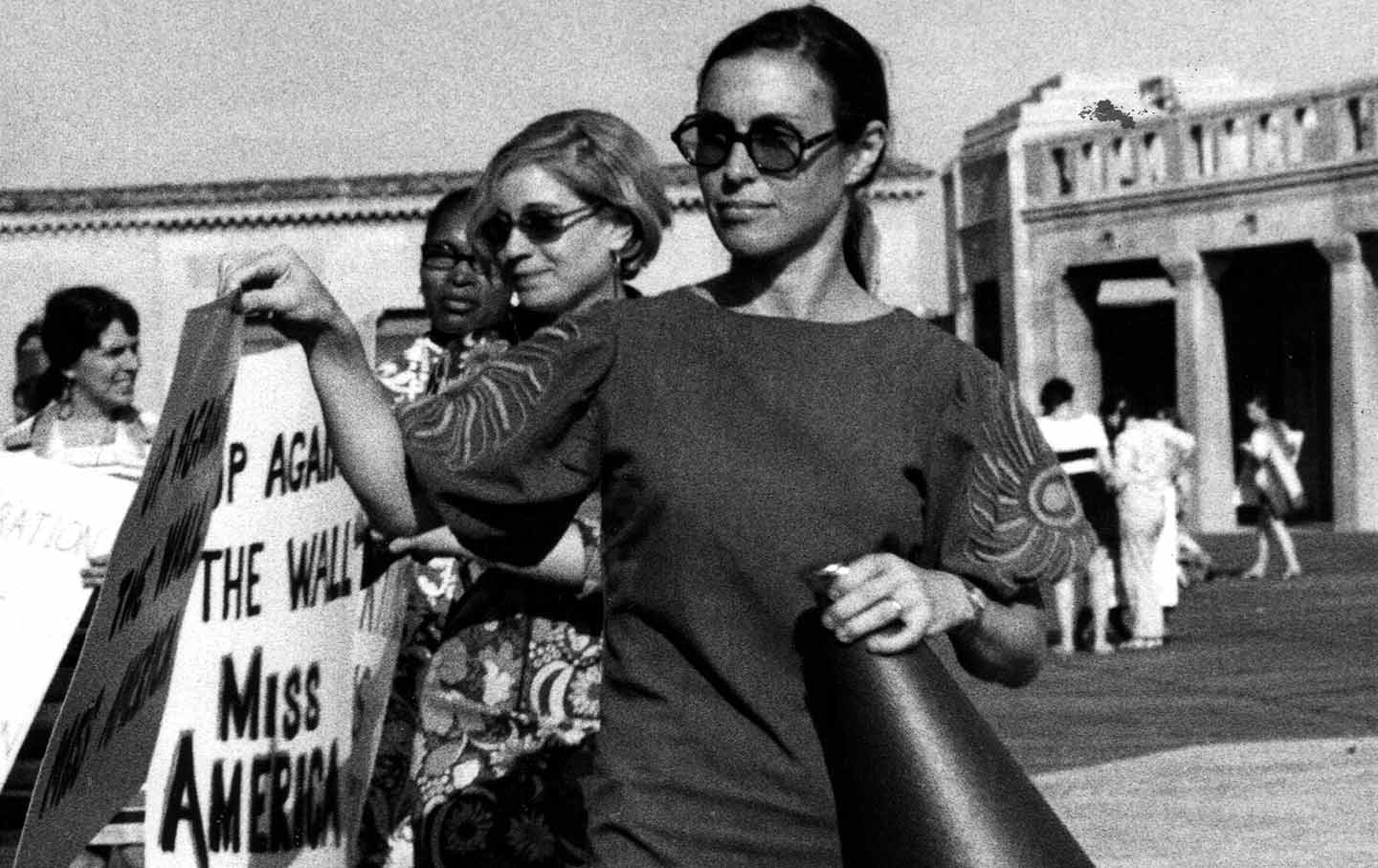 Alix Shulman holds an “Up Against the Wall” poster at the Miss America Protest on September 7, 1968. (Courtesy / Alix Shulman)

Now that my 1972 debut novel, Memoirs of an Ex-Prom Queen, is being reissued for a new generation, I am amazed that the book once greeted as “sad,” “shocking,” and “traumatic” is being welcomed nearly a half-century later as “fun,” “funny,” and “furious.”

The first task of the newly formed women’s liberation movement of 50 years ago was to convince masses of women that the discrimination and limitations we faced every day were not just the natural order of things, but acts of oppression. The movement of the late 1960s and early 1970s pursued this task through writings, street theater, and consciousness raising (CR)—a process by which hundreds of thousands of women, meeting in small face-to-face groups to compare their personal experiences of misogyny, became politicized.

While I marched, the similarities between that beauty pageant and the ubiquitous prom queen competitions dawned on me. As baffled passers-by shouted insults at us—”ugly!” “jealous!” “dykes!” “commies!” “Go back to Russia where you came from!”—I recalled how contemptuously boys judged us, and how violently they treated us, from childhood on. Starting with this insight I envisioned a novel in which I’d seduce readers to the need for a mass women’s movement by dramatizing everyday oppression in the life of one white middle-class Midwestern pre-feminist prom queen.

Though my imagined audience was the few hundred movement stalwarts who I knew would get my jokes, by 1972, when the book was published, so many women had gone through consciousness-raising and hungered for a feminist interpretation of their experience that the novel became a best seller.

Early reviewers of both sexes found it “revealing” and “shocking.” “I daresay that not a woman reader will be really shocked and that the average man’s hair, regardless of length, will automatically stand on end from page to page” (the Cleveland Plain Dealer). “Has the sting of recognition” (the New York Daily News). Negative reviewers condemned the book’s anger and easy sexuality—both violations of prevailing standards of female decorum. The condescending New York Times review labeled the narrator of “this angry little book…too much of a pushover,” and while finding the book sometimes amusing, declared it “generally exasperating.” At the same time, some female fans were offended by the suggestion that the book was funny: In their experience, it was too tragically true. “The book would be black humor if it weren’t uncomfortably true” (The Baltimore Sun)—as if it couldn’t be both.

Today’s readers inhabit a different world. Having grown up with the insights and social transformations set in motion 50 years ago by the women’s liberation movement, they don’t need convincing that women are an oppressed group. They know it. The movement’s partial victories having spared them some of the troubles my fictional heroine faced, they can read the novel with a distance that was unthinkable when the movement was new. Rather than being shocked by its revelations, they are entertained: “One of the more fun (explicitly) feminist novels ever written” (Jezebel). Far from finding anger unseemly, in this age of resistance and #MeToo, they embrace the feminist fury that inspired the book: “Funny, frank and full of righteous rage, Memoirs of an Ex-Prom Queen will make you laugh and want to smash the patriarchy” (Red magazine, UK). Exactly the result I was aiming for!

The backlash-battered second wave of the feminist movement of the later 20th century became history even as a Trump-agitated 21st-century wave began furiously pounding the shores. Each generation rides its wave as far as it can. At 87, I am thrilled to have lived to see a powerful, diverse new wave build on the women’s liberation strategies of paper leaflets, street theater, and consciousness-raising with online organizing, million-woman marches, and renewed rage. Together let’s smash the patriarchy!