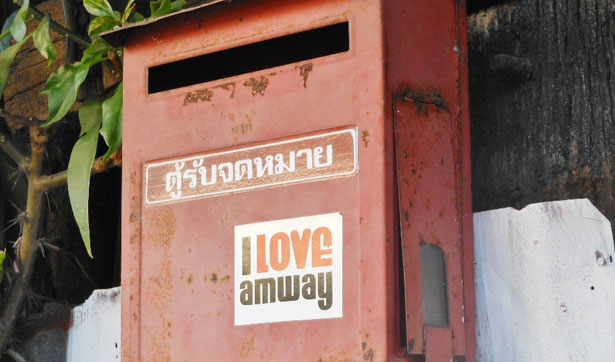 This summer I put together a three-part series on American conservatism and its passion for “Multi-level marketing” (MLM) systems like Amway—pyramid schemes, in so many words. I promised a fourth part as a conclusion but never got to it—other issues pressed. (A wingnutologist’s work is never done….)

Here was part one, on how MLMs (don’t) work.

And part two, on how the Bush administration crushed the regulation of Amways et al by hiring one of Amway's lawyer to the post in charge of regulating Amway.

And part three, on how MLM fleecers saturate conservative politics, buying off, for example, the state attorneys general responsible for (not) prosecuting the frauds.

Allow me to return to the series, belatedly, for part four—on why this all matters for understanding the American right as such. It might not seem topical, now that conservatives in Washington are so busy preparing the next chapter in their project to bring the nation once more to the brink of fiscal apocalypse unless their lunatic vision of the American economy is given full rein. Indulge me, though: that is why understanding the right-wing affection for pyramid schemes is so important right now. It helps explain where those lunatic economic visions grow out of: the fantasy about how the world works that beats in right-wingers’ hearts, from Main Street all the way to United States Capitol.

I’ll start with a story. When I was in Tampa, Florida, reporting on the 2012 Republican convention for The Nation, I happened upon a nice fellow, a Mormon, named Walt. (Utah has the most network marketers per capita by far; “MLM,” Utahans joke, stands for “Mormons Losing Money”; Mitt Romney is implicated in the hustle from his Mormon head to his Mormon toes.) He spoke of his affection for Romney and the Republican Party (he’d seen my press pass, and asked how he, a lowly cellphone salesman, could get inside the convention); he talked about Obama’s passion for giving free money to lazy, shiftless slackers (“That’s Obama’s thing: entitlement.”). We reached an impasse when I tried to argue him out of his Fox-fed propaganda, and we started talking about taxes instead. That was when he told me, “Anyone who doesn’t have a home-based business is ignorant.” I asked him what kind of home-based business he had, which was when he revealed himself as a passionate MLM devotee.

Ignorant? Oh, really. As I quoted in part one of my series, according to a study of 22,281 distributors for an MLM company called Trek Alliance, “Under several optimal scenarios in which the distributors do exactly what is needed to obtain the rewards proposed by the Pay Plan, approximately 98.8 to 99.6 percent fail to achieve any earnings,” and “in all likelihood more than 96 percent of Trek distributors experience business failure.”

So why do MLM distributors do it? And why do they proselytize that you should, too? Well, it’s easy to explain the proselytization piece, in part: recruiting new distributors is what old distributors have to do in order to try to make money. But I don’t think my friend Walt in Tampa had any illusions about recruiting me. His passion came straight from the heart. And where did this passion come from?

Walt was wearing his work uniform: he was a middle-manager at a a major national cellphone company. But when I returned to the arena for the evening’s convention session, I heard nothing that might speak to cubicle drones like Walt. Or at least it seemed that way, on the surface. Instead, I heard the same theme over and over again from the Republicans onstage—deconstructing Obama’s famous, out-of-context line, “If you’ve got a business, you didn’t build that.” Remember?

A small-town mayor (from Utah!) running for Congress: “This is the America we know, because we built it.”

A country singers crooning a brand-new ditty he wrote for the convention: “I Built It.”

Janine Turner, who played Maggie on the TV show Northern Exposure, saying “President Obama, I’m here to tell ya, government didn’t build it. God and the American people built it!”

As I wrote from Tampa, according to its entire rhetorical thrust, “If you’re not among the small percentage of Americans who own a business, or don’t aspire to become one, you were invisible to that convention.” You had no moral claim the rest of us were bound to respect. Indeed you were hardly American at all. And this, as much as the false get-rich-quick promises companies like Trek and Amway”—short, naturally, for “American Way”—offer, is why they prove so seductive to those of a right-wing bent: by letting folks like Walt “buy” a “home-based business” off the shelf, MLMs let nine-to-fivers style themselves as members of the only caste of Americans that matter on the right—entrepreneurs.

As critic Robert Fitzpatrick, author of False Profits: Seeking Financial and Spiritual Deliverence in Multi-Level Marking and Pyramic Schemes, told me this summer, “MLM is presented as an ‘alternative’ to the conventional economy that is portrayed as entrapping, uncaring or closed off, a place for losers and wage slaves.” (That’s my friend Walt all over: a wage-slave, struggling to escape.) Fitzpatrick continues, “Conservative ideology of the Randian bent has a lot in common with the culture of MLMs. Both fail to acknowledge that such a thing as privilege exists, and perpetuate the fiction that someone’s success is only due to their gumption and their willingness to work hard. No, success in their world has nothing to do with the wealthy, educated family they were born into, or their inborn privilege of the ‘right’ race or sex, or any other type of help, most especially not governmental help such as Social Security death benefits. In MLM, this translates to ‘anyone can be successful!’ And if this rich dude trotted out in front of the crowd at every MLM convention, and on every piece of their promotional material can do it, so can you! Except that rich dude? Yeah, he doesn’t earn most of his money the way you would have to. But they never tell anyone that.”

In other words this is right-wing economic ideology in its purest, heroin-like form.

And it is at the same time such a nice con. As another accomplished MLM critic, Douglas Brooks, told me, “One of the paradoxes of MLM is that many of the victims do not complain. We speculate that among the reasons are the sense of shame, that the MLM conditions participants to believe that if they fail it will be their own fault.”

Sound familiar? “Beyond sucking $10–$20 billion out of Main Street each year,” says Fitzpatrick, this industry’s “main impact is intellectual and political. MLMs promote a radical individualism, hatred of government and a strange twist on economics in which preying on a neighbor is called ‘marketing.’”

Does the notion of such an intimate connection between the grifters and the mainstream conservatives sound a bit far-fetched? Consider that the DeVos family, the owners of Amway, all but owns the Michigan Republican Party. And consider this goofy little detail. In 1982, Amway funded a traveling puppet show to teach kids about the virtues of “free enterprise.” A UPI article at the time described it: “The tale has Tom Smith, a successful hard-working bread-maker in the land of Mist and Myth, battling meaningless fees and excessive taxes and regulations imposed by the Chancellor of Rules and the Ambassador of Gobbledygook. Smith is forced to raise prices so high he goes out of business and lands in jail. Children viewing the film are told their applause will save him. Saved, Smith not only succeeds in making bread to feed the hungry but also turns enough of a profit to take the honeymoon he never had.”

I thought that story sounded familiar. Then I realized I’d heard it from the mouth of Ronald Reagan—who told it (and re-ran it often) when he did a daily radio show in the 1970s, which I researched at the Hoover Institution at Stanford University. But you don’t have to travel to Stanford. You can watch a film version of “The Incredible Bread Machine” on YouTube, introduced by no less than former Treasury Secretary William E. Simon.

America is a strange place. The American right is stranger. These are the people who shut down our government and almost caused the United States Treasury to default. These are Barack Obama’s negotiating partners.