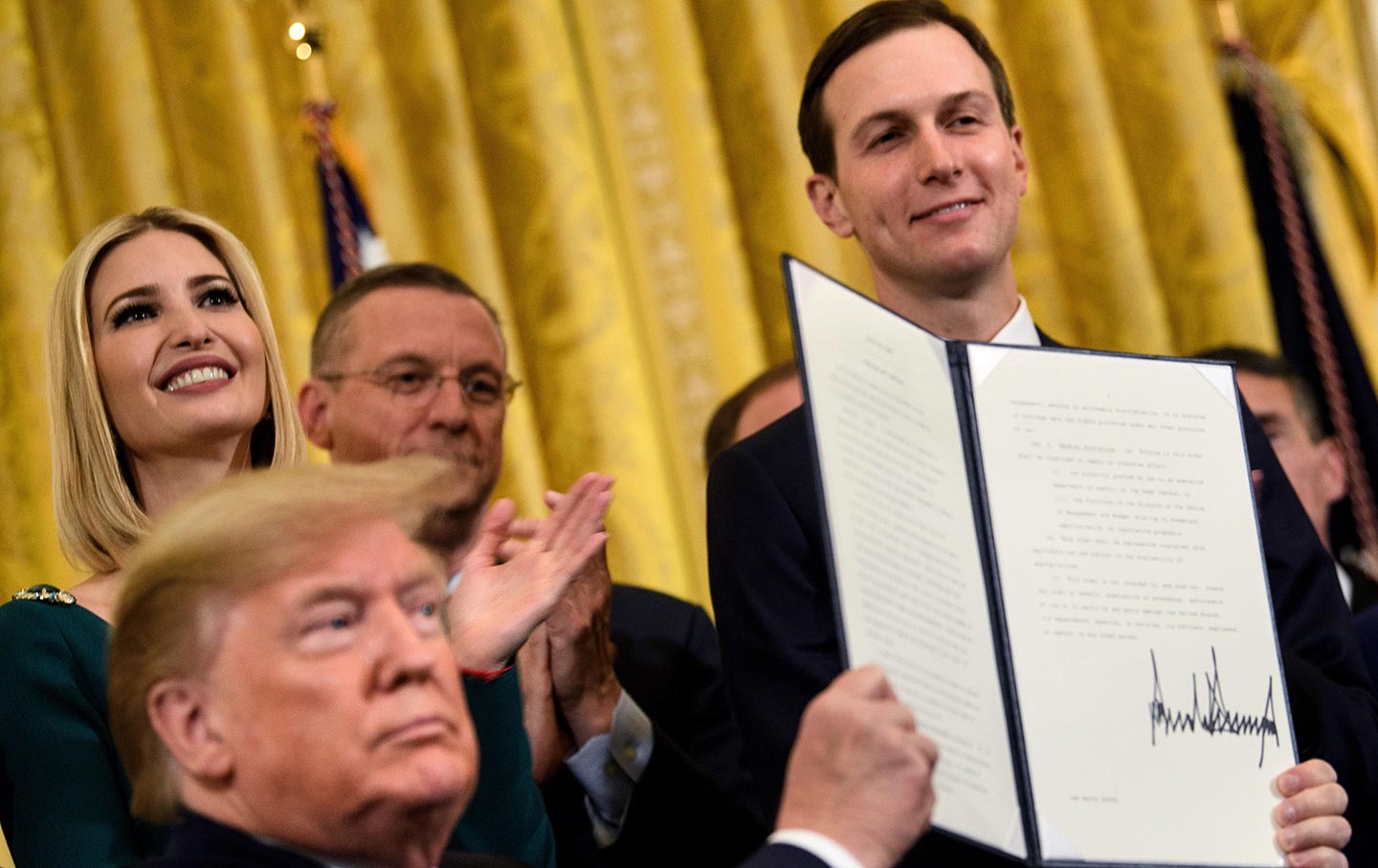 In an alternate universe, the idea of a presidential order designed to protect Jews from discrimination on college campuses would not necessarily create a firestorm of mutual recrimination and internecine political warfare. True, there is no consensus on whether “Jewish” is a religious, cultural, ethnic, or national identity. Most often, it is framed as a combination of at least three, but not always and certainly not in the views of all the various denominations and sects that accept the appellation. But there is no question that anti-Semitic acts are increasing across the United States, and they are being undertaken by people who could not care less about these distinctions. And there is nothing inherently objectionable about using the power of the federal government to try to protect people, including college students, from those incidents’ consequences.

But in this universe, the guy who ordered this protection, Donald Trump, has revealed himself repeatedly to be an inveterate anti-Semite. Just a few days before he issued the executive order, he told supporters of the Israeli-American Council, “You’re brutal killers, not nice people at all…. Some of you don’t like me. Some of you I don’t like at all, actually.” He went on to insist nevertheless that the Jews gathered to hear him were “going to be my biggest supporters,” because Democrats were proposing to raise taxes on the superwealthy. In other words, Jews are greedy and care only about their personal fortunes. Trump, of course, was playing to type. He, his party, and his highest-profile supporters have repeatedly demonized Jews in political advertisements, deploying age-old anti-Semitic tropes that have been used to stir up violence against vulnerable Jewish communities in Europe and elsewhere. In addition, Trump frequently implies that Jews are not “real” Americans. He tells Jews that Bibi Netanyahu is “your prime minister” and complains that Jewish Democrats—which is most Jews—are “disloyal to Israel.”

That’s on the one hand. On the other, Trump has been a perfect patsy for Israel’s right-wing government and its supporters in what is misnamed the American “pro-Israel” community. While previous presidents sought, without much success, to restrain Israel on behalf of a hoped-for future peace agreement with the Palestinians, Trump has given that nation’s most corrupt and extremist leadership in its 71-year-history carte blanche—peace and the Palestinians be damned.

If the simultaneous embrace of anti-Semitism at home and philo-Semitism when it comes to Israel strikes one as contradictory, this is a mistake. Trump, like so many of today’s elected “populists,” sees considerable advantage in playing to hometown prejudices for personal gain while boosting Israel as a bulwark against worldwide Islam, which many of the president’s supporters consider an even greater offense to Christian belief than Jews are. Jews may be greedy and disloyal at home, but as long as Israel is out there kicking the shit out of the Arabs, it’s a trade-off that right-wing autocrats and their neofascist followers can get behind.

Most American Jews understandably want no part of this devil’s bargain. They are not interested in having their patriotism questioned. They remain among the most loyal and liberal constituencies in what is left of the decidedly tattered New Deal coalition that Franklin Roosevelt constructed back in the 1930s. And most hold Trump and his alt-right supporters accountable for the atmosphere of menace that has led to horrific attacks on Jews, like the massacre at a Pittsburgh synagogue last year.

But the issue of the executive order is complicated by the fact that it is understood by all to be a means for the federal government to step in and quash the intensifying criticism of Israel on college campuses—most notably, criticism that takes the form of the boycott, divestment, and sanctions movement, or BDS. And it does this in part by insisting, as Jared Kushner recently argued in a New York Times op-ed, that all “anti-Zionism is anti-Semitism.”

I’ve been an outspoken critic of the academic BDS movement for some time now. But if you ask me, the movement has been a spectacular failure in every respect, save one: It has succeeded in turning many college campuses into anti-Israel inculcation centers and therefore has scared the bejesus out of the Jewish parents paying for their kids to attend them. At the same time—even if you allow that occasional anti-Semitic comments and actions by some of BDS’s supporters are outliers and not indicative of most of its followers—I find the idea and, even more so, the practice of an academic boycott to be undeniably contradictory to universities’ philosophical commitment to freedom of expression and ideas.

Nonetheless, the explicit and intellectually indefensible equation of anti-Zionism with actionable anti-Semitism is an obvious offense to the notion of freedom of expression, however much it cheers the tiny hearts of right-wing Jews and other Trump defenders. Jewish students already had all the protections they needed before Trump’s executive order. Title VI of the Civil Rights Act covers discrimination on the basis of a “group’s actual or perceived ancestry or ethnic characteristics” or “actual or perceived citizenship or residency in a country whose residents share a dominant religion or a distinct religious identity.”

The New York Times’ early, inaccurate reporting on the executive order, in which the paper falsely stated that the order would “effectively interpret Judaism as a race or nationality,” deserves special mention here for creating the panic. But the result of the entire episode is that, yet again, the Trump administration has placed a stupid, shiny object before the media, and the hysteria that has ensued has divided Americans, Jews, liberals and conservatives, and free speech and human rights activists, all while the administration continues its relentless assault on our democracy and better selves.