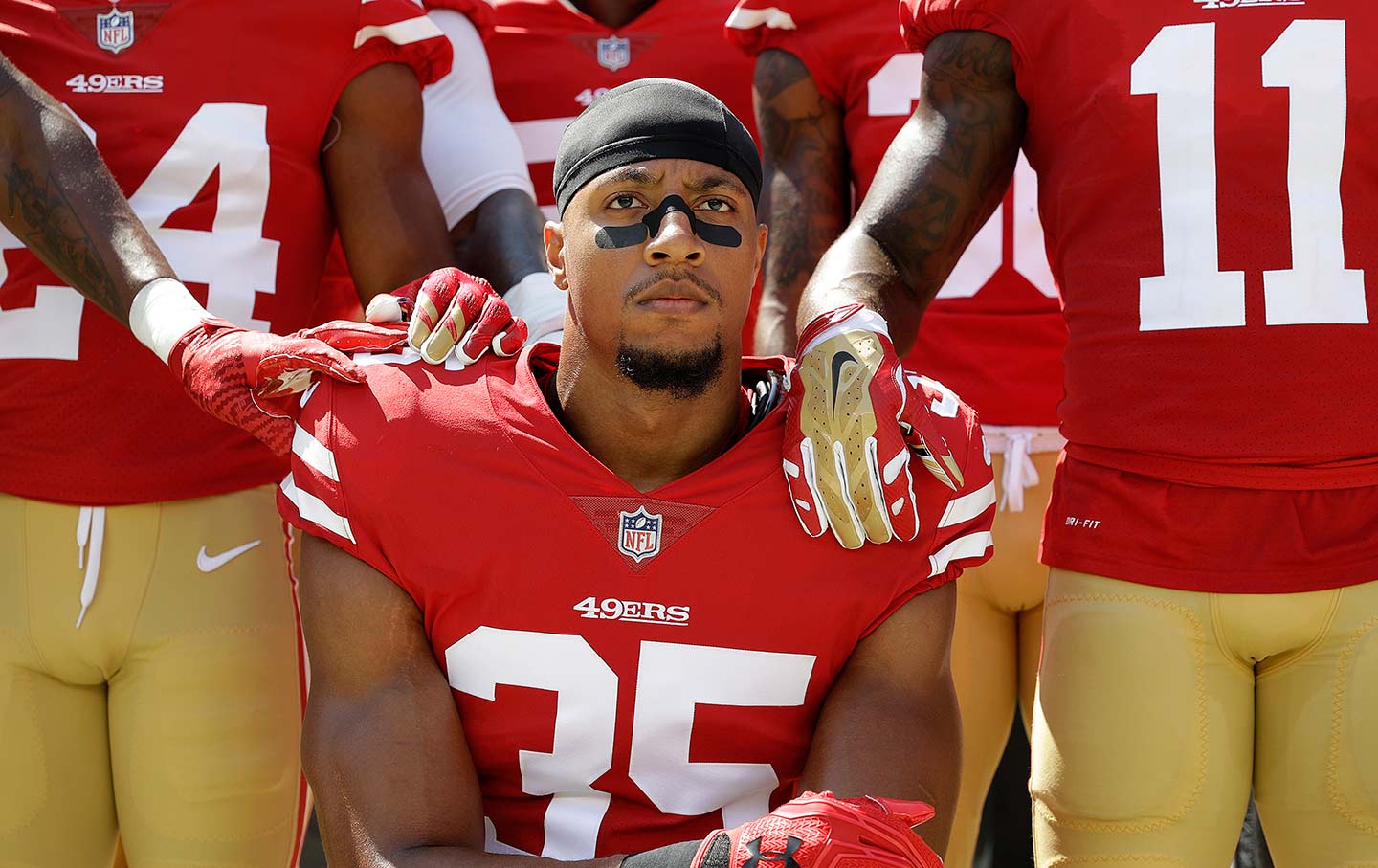 The news was upsetting, yet neither shocking nor surprising. Free-agent NFL safety Eric Reid had been brought in for a workout with the Cincinnati Bengals and everything was looking solid, until team owner Mike Brown asked him for a commitment that he would no longer take a knee or otherwise protest during the national anthem. Eric Reid, as a San Francisco 49er during the 2016 season, was the first person to kneel alongside team quarterback Colin Kaepernick. He continued this practice, along with 49er teammates, throughout 2017.

Reid had already publicly made clear that he was considering ceasing to protest with the new season, looking at other methods to raise awareness about racial inequity, but when Mike Brown wanted an extra assurance, Reid made it clear that his humanity was not for sale.

Eric Reid has been so much more than an athlete who protested during the anthem. He wrote an op-ed for The New York Times in September 2017 in defense of Kaepernick, decrying his “blackballing” from the league. He wrote this knowing that he would be a free agent the following spring and all too aware of what this statement could do to his own future employment prospects. “Anybody who has a basic knowledge of football knows that [Kaepernick’s] unemployment has nothing to do with his performance on the field,” he wrote. “It’s a shame that the league has turned its back on a man who has done only good. I am aware that my involvement in this movement means that my career may face the same outcome as Colin’s. But to quote the Rev. Dr. Martin Luther King Jr., ‘A time comes when silence is betrayal.’ And I choose not to betray those who are being oppressed.”

In December, Eric Reid also publicly quit the Players Coalition, the negotiating organization of players who were sitting down with team owners to speak about the protests and attempt to have the owners make financial contributions for various causes related to racial equality and criminal-justice reform. Reid went public to say that he was told by people in the Players Coalition that he needed to stop protesting if monetary contributions were going to made. He called the ownership offer a “charade” as well as “publicity stunt.” He also formally objected to Kaepernick’s being shut out of the negotiations.

Reid has in addition been unafraid to call out ownership on social media for why he remains unsigned, writing, “GMs aren’t the hold up [to being signed]. It’s ownership. People who know football know who can play. People who know me, know my character.”

As with his friend Kaepernick, it is Reid’s lack of willingness to bargain his personhood and principles that is critical to understanding why owners fear what he may do (there is a particular irony in the fear of protest expressed by Mike Brown, given the Bengals’ present and past history of signing players with criminal records as well as histories of violence against women).

Not surprisingly, Reid has been a fixture at Kaepernick’s Know Your Rights camps. I interviewed Reid at the camps staged in Chicago last year. He said to me, “I want to show these kids that we care. That there are people who want them to succeed in life, and we are here to help.”

Reid also expressed that the previous 2016 season had been a whirlwind, saying, “I’ve learned a lot about political athletes in the last year and it has helped me to realize that I’m doing, what Colin is doing, isn’t new. It’s now our turn to step up to the plate. Our goal was to open up the conversation and we accomplished that goal.” Eric Reid is still “opening up the conversation,” and now it is about something far more dangerous to the NFL. It’s a conversation about the league’s moral compass and why it is so terrified of free speech, and about players’ trying to have a conversation about the gap between what this country claims to represent and the realities of daily life for black Americans. The league fears Eric Reid because he is offering only his playing ability to NFL teams: not his politics and not his personhood. His skills are for sale. He is not.