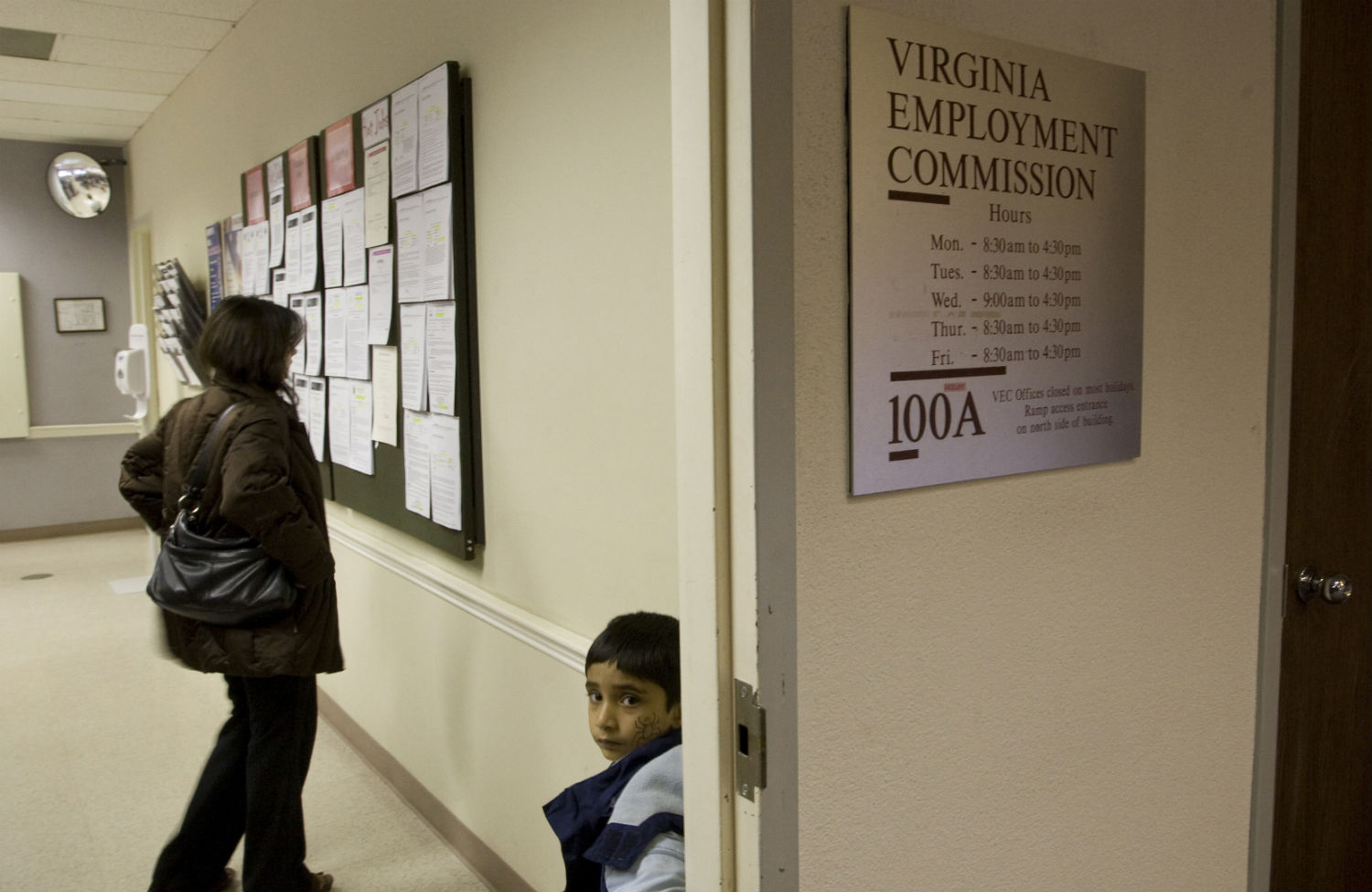 A woman looks at job postings with her son at the Virginia Employment Commission office in Alexandria, Virginia, on November 6, 2009. (Reuters/Molly Riley)

Fifty years after President Lyndon Johnson announced a “War on Poverty,” a majority of Americans believe that persistent economic hardship is the result of a broken economy, not of personal or government failures. They broadly agree that the government has a responsibility to use its resources to fight poverty, and should pursue a target of reducing it by half over the next decade.

Those are the conclusions of a public opinion survey published Tuesday by the Center for American Progress. The report assessed perceptions of poverty in general, as well as opinions of the War on Poverty in retrospect and of policy proposals on the table now. As lawmakers move to cut benefits and refuse to consider serious investments in the economy, in education and in healthcare, the survey is another reminder that those are precisely the investments people want the government to make.

News of falling unemployment, a rising stock market and an end to the recession hasn’t shaken the public’s perception that a vast proportion of Americans can’t meet their basic needs. In fact, Americans see poverty as being far more widely spread than the government does. Asked what percentage of their fellow Americans were living in poverty, the average guess was 39 percent—a sharp rise from the official estimate of 15 percent. Poverty is also a common personal experience, with more than half of respondents reporting that they knew someone who was poor.

When it comes to equality of opportunity, a majority of Americans don’t believe that poor Americans face a level playing field. And when forced to choose between core arguments about the roots of American poverty—that it stems from a flawed economic system, or from personal failings—nearly two-thirds agreed with the structural argument.

At the heart of opposition to safety net programs is the idea that poor Americans are undeserving of assistance, and that they are poor because they are lazy. It turns out that very few Americans polled by CAP support this core principle. Nearly 80 percent agreed that “most people living in poverty are decent people who are working hard to make ends meet in a difficult economy,” including 66 percent of white conservatives and libertarians. The poll showed nearly equal agreement across race and party lines on the point that a shortage of jobs with good wages is the primary reason for poverty in America, and that the poor receive unfair criticism.

Still, the welfare-queen archetype endures: even while agreeing that laziness is not the cause of poverty, a majority of respondents said that poor Americans abuse government programs. And yet people appear to believe they’re worthwhile anyway. Several progressive policy proposals, including expansions of the safety net, received at least 80 percent total support: financial assistance for childcare, an expansion of nutrition assistance, universal pre-K, more publically funded scholarships, and increasing the minimum wage.

Similarly, more Americans reported a negative association with the term “War on Poverty” than positive, but the perception shifted after the programs made possible by President Johnson’s war were sketched out for them. Then, a whopping 86 percent agreed that the government should use its resources to fight poverty, and 61 percent said the War on Poverty has made at least some positive difference.

We’re sure to hear much this week about the disappointments of Johnson’s war, but that’s simply a convenient means of condemning any new investments in the economy, in education and in the safety net. As The Washington Post reported Tuesday, Republicans including Senators Paul Ryan and Marco Rubio, who will speak separately on the subject on Wednesday, are struggling to put forward specific policies to back up their claims to care about the millions of Americans in economic distress. We’re likely to hear about school choice, “economic freedom zones,” and tax breaks for “job creators.” If some Republicans are distancing themselves from the old argument that personal failings cause poverty, it’s to assert that government failure is responsible instead.

But privatization is not a new policy, and it’s had countless failures of its own. When it comes to critical tests of their commitment to struggling Americans, Republicans fail again and again. Their refusal to back the expansion of Medicaid and an extension of unemployment benefits are pressing examples. Certainly Americans are concerned about the failings of government, but there are plenty of indications that such frustrations are more about what the government is not doing now than what it did fifty years ago. Even among Democrats, much of the economy talk remains focused the middle class, and lawmakers are loath to embrace any serious spending. But as the CAP poll suggests, many Americans have the appetite for an anti-poverty agenda driven by government investment. That lawmakers, both national and local, found the courage to fight for it could be the story of the year.