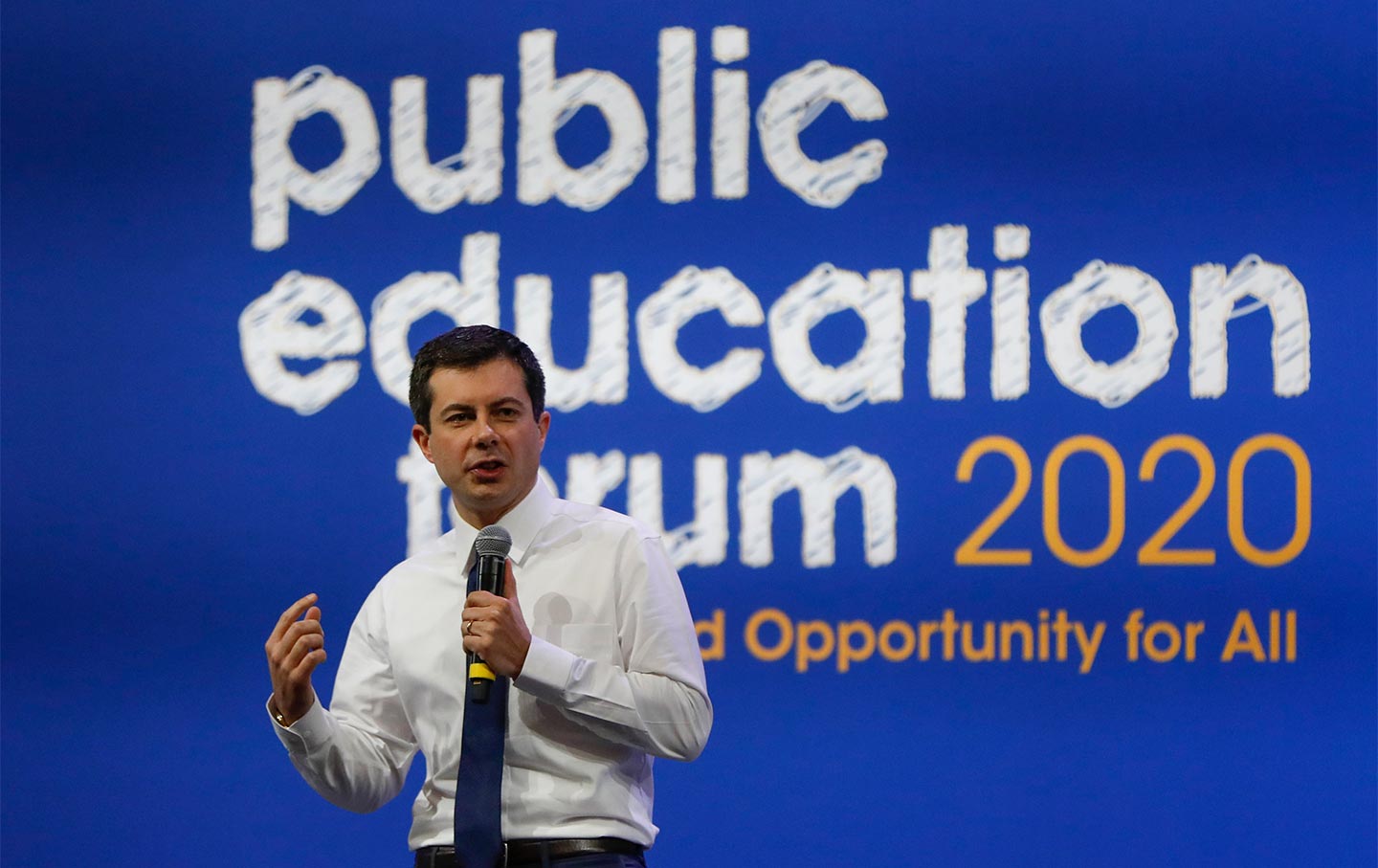 Pete Buttigieg was one of seven Democratic presidential candidates who spoke at a public education forum in Pittsburgh on December 14, 2019. (Keith Srakocic / AP)

When seven of the Democratic presidential candidates descended on Pittsburgh recently for a daylong forum on public education, one of Pennsylvania’s unlikeliest new political stars was on hand to greet them. Working Families Party candidate Kendra Brooks, a black single mom from North Philly, won an at-large seat on the Philadelphia City Council this fall, stunning the political establishment. At the heart of Brooks’s insurgent campaign was her resistance to Philadelphia’s two-decade-long experiment with school privatization, including the explosion of charter schools and the mass closure of neighborhood schools. “If we as community members don’t commit to this public institution that we fought so hard for generations ago, we’re going to lose control of it,” says Brooks.

Her message resonated with Philly’s voters, and thrilled the audience of teachers and activists who were on hand in Pittsburgh to hear a long list of presidential hopefuls weigh in on the future of the country’s schools. But just outside the convention center, on a rain-slicked plaza, the resistance to the Democrats’ leftward swing on education was on vivid display. Over 100 charter school parents, part of the same school choice network that disrupted an Elizabeth Warren campaign event last month, came armed with a message of their own: Black Democrats support charter schools.

Welcome to the Democrats’ school choice wars. For the last three decades, charter schools have attracted bipartisan love, amassing an unlikely—and unwieldy—amalgam of supporters along the way: GOP free marketeers, civil rights advocates, “third way” Democrats, and hedge fund billionaires. But in an era of fierce political partisanship, that coalition is now unraveling.

In 2008, then-candidate Barack Obama promised to double federal spending on charter schools. Fast forward a decade, and both Bernie Sanders and Elizabeth Warren have pledged to phase out the $440 million Federal Charter School Program, which provides start-up funds to new schools. And even as “moderate-lane” candidates like Buttiegieg, Biden, and Klobuchar try to paint their further-left counterparts as out-of-touch spendthrifts on, for example, free college or Medicare for All, the top candidates are remarkably united when it comes to charter schools: They’re over them.

The go-to explainer for the Democratic candidates’ newfound chill toward charters is that they’re pandering to the teachers’ unions in hopes of winning the backing of a key Democratic Party constituency. “Warren Embraces Teachers Unions Over Charter Schools,” declared US News and World Report in a typical headline. But missing from these takes is the impact of the Republican Party’s sharp shift right on education. Charter schools emerged as a bipartisan alternative to the GOP’s preferred policy: sending tax-payer funds to private religious schools via vouchers. In the Trump-era GOP, vouchers are ascendant once more. 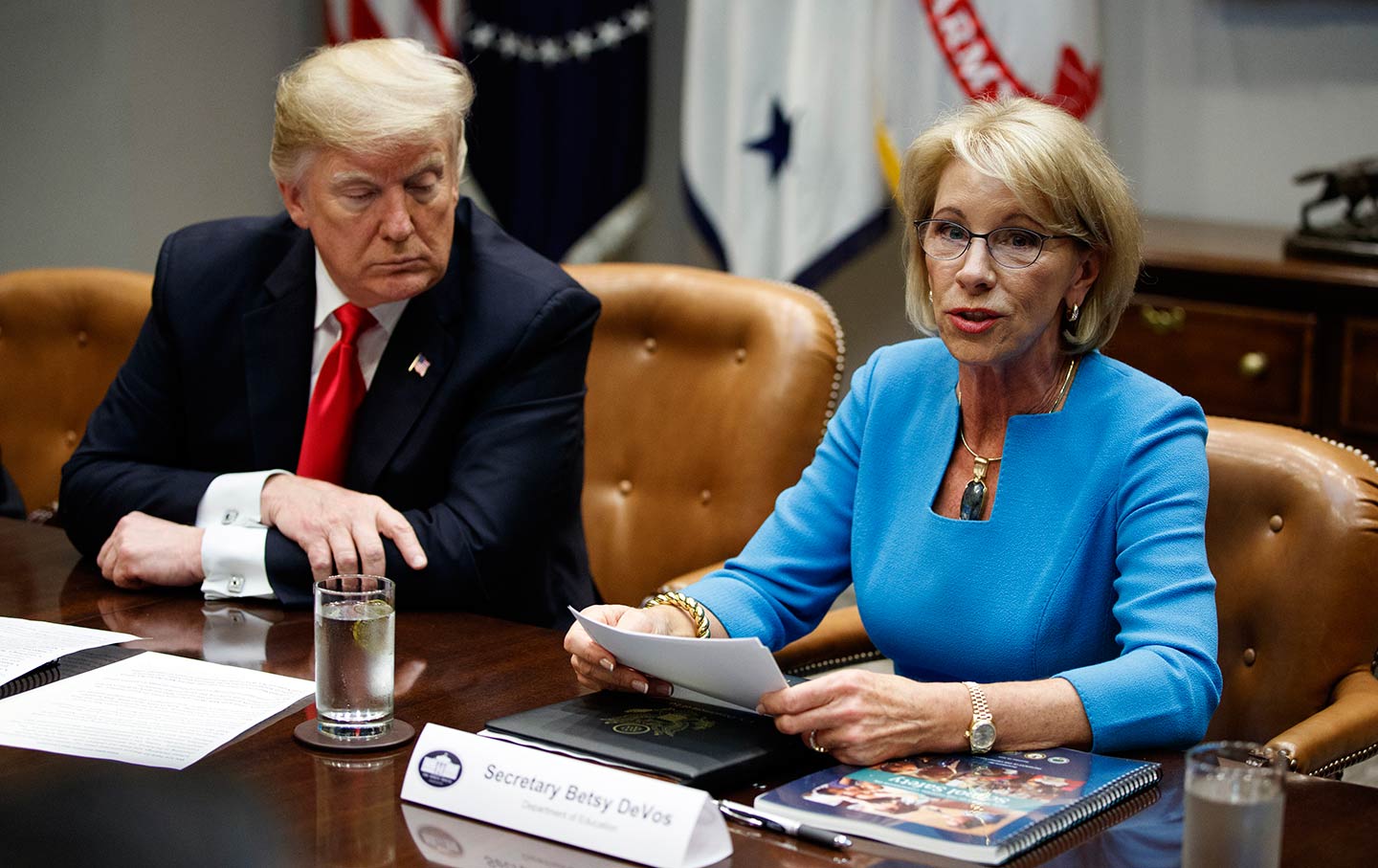 In state after state, conservative lawmakers are enacting voucher programs. According to EdChoice, a school choice group dedicated to carrying out the education legacy of Milton Friedman, 15 states and the District of Columbia now have voucher programs; 18 offer tax-credit scholarships that provide wealthy donors and corporations generous tax breaks for donating to private-school scholarship funds. The latest vehicle of choice, now on the books in six states, is the education savings account that gives parents part of their state’s per-child school funding, preloaded on a debit card, and leaves the decision of what to spend it on—tutoring, tuition, homeschooling curricula—up to them.

When President Trump feted Betsy DeVos, Ted Cruz, and other school choice luminaries at the White House in December, he plugged vouchers as a rescue for the “forgotten child,” trapped in “failing government schools.” But the GOP’s true policy aim these days is much more ambitious: private school vouchers for all. In Ohio, students in two thirds of the state’s school districts are now eligible for vouchers, a ballooning program that is on track to cost taxpayers $350 million by the end of the school year. And in Florida, school vouchers are now being offered to middle-class students, the latest gambit by conservatives in their effort to redefine public education as anything parents want to spend taxpayer money on. “For me, if the taxpayer is paying for the education, it’s public education,” Florida’s Governor Ron DeSantis proclaimed earlier this year.

For Democratic presidential contenders, the GOP’s sharp shift rightward on education means that they’re campaigning in states where the dismantling of public schools is a central issue. Blue state pundits seemed puzzled when Cory Booker, one of the Democrats’ most prominent charter school supporters, referenced the “assault on public education” while stumping in Iowa. But Republican lawmakers there have repeatedly tried to push through an expansive school voucher program. After conservatives in New Hampshire fell short in their bid to make every student eligible for an education savings account, they moved onto a new goal: doubling the number of charter schools in the state with the aid of a $50 million gift from the Federal Charter School Program courtesy of Betsy DeVos. Or take South Carolina, a state that spends half as much per student as it does per inmate, and where GOP lawmakers just unveiled a massive voucher program that could drain as much $500 million from the public schools in its first two years.

“There’s something different happening here than what we’ve seen in the past,” says Derek Black, a law professor at the University of South Carolina School of Law. “These are more expansive programs and they’re being pushed more aggressively.”

But the GOP’s increasing hostility to public education has also presented an opportunity for Democrats. In key battleground states, Democrats are making inroads by tying their GOP opponents to controversial education policies. In Michigan and Wisconsin, voter backlash against GOP spending cuts to school spending and the growth of school choice at the expense of traditional public schools helped Democrats retake governors’ mansions for the first time since 2011 and powered a blue wave in suburbs that have long been Republican strongholds.

The clearest signal that the GOP’s embrace of DeVos-style privatization has opened a door for Democrats came in Kentucky, where not even an 11th-hour appeal from President Trump was enough to save Republican governor Matt Bevin. The only GOP candidate for statewide office to lose, Bevin alienated suburban and rural voters with his attacks on public school teachers and his embrace of school privatization, including a push to bring charter schools to Kentucky. As one lifelong GOP voter told The Washington Post, she’d looked past her differences with Democratic challenger Andy Beshear over abortion because “she worried more about the damage Bevin could do to schools than she did about how much Beshear could advance abortion rights.” 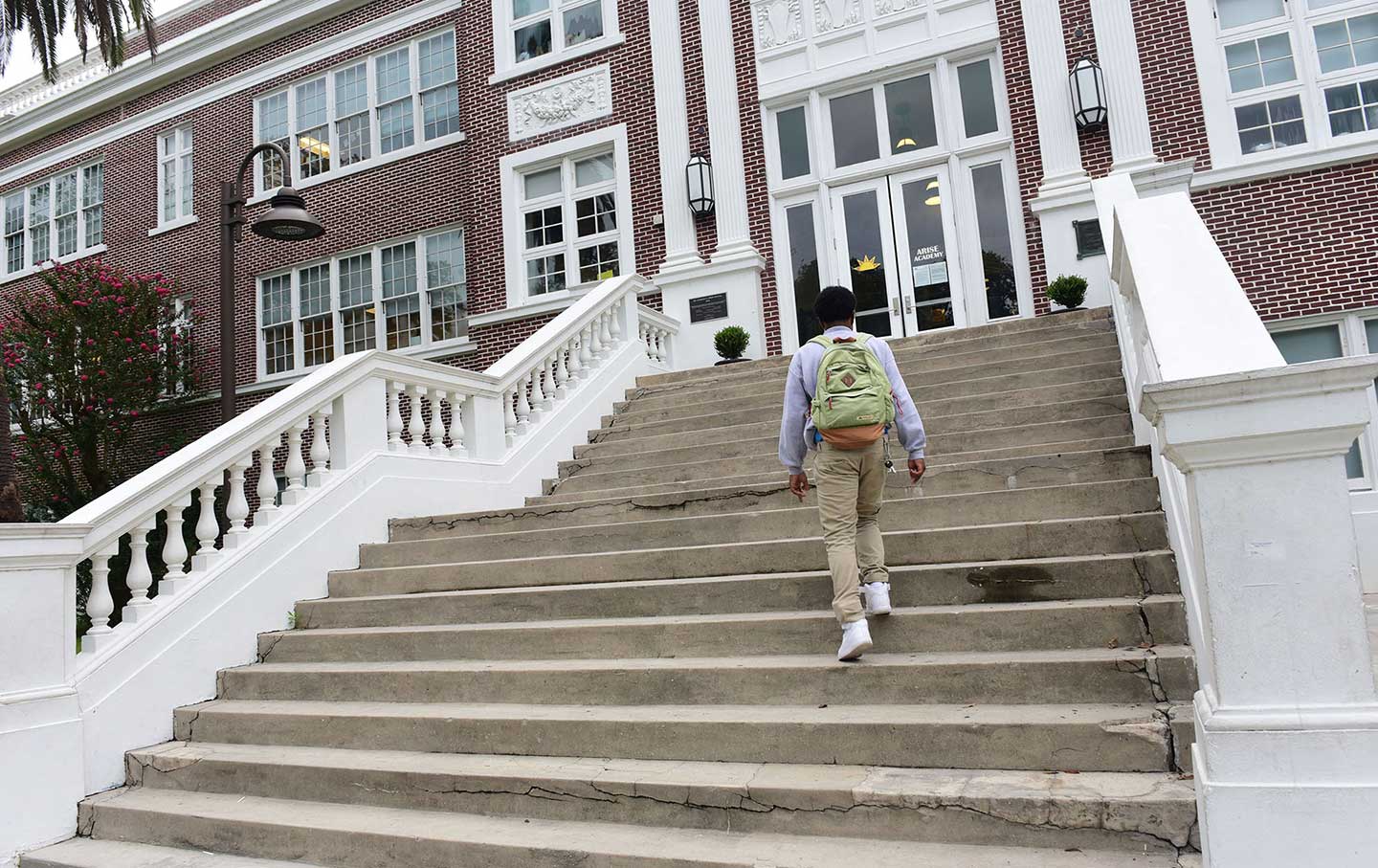 At the Public Education Forum in Pittsburgh, the topic of charter schools and school choice barely came up. Instead, the seven presidential wannabes hewed close to what is emerging as the post-Obama orthodoxy on education: a massive reinvestment in public schools, including pre-K, fairer school funding, and higher pay for teachers. But while other favored Obama policies—like merit pay for teachers, or evaluating teachers on the basis of student test scores—are receding due to a lack of public support, the Democrats’ pivot on charter schools has provoked an intense intraparty backlash.

“Minority Voters Chafe as Democratic Candidates Abandon Charter Schools,” was the headline of a recent New York Times story, prominently displayed on the front page. The reporters cite long charter wait lists in cities and recent polling showing a widening racial divide over charter schools—white voters’ approval of charters has plummeted in the age of DeVos, while black and Latino approval of the schools has held steady. Where it’s harder to discern the racial gap is at the polls.

It was black voters, for example, who powered charter critic Kendra Brooks to office in Philadelphia, where more than one-third of students now attend charter schools. Why the disconnect? In Philadelphia as in Detroit, New Orleans, Oakland, and elsewhere, the popularity of charter schools has come up against the unpopular consequences of their dramatic expansion: the loss of neighborhood schools and the jobs that go with them, the turmoil of school closures, and the demise of political influence that follows in privatization’s wake.

When Massachusetts voters rejected a 2016 ballot question proposing a dramatic expansion of charter schools, the tally did reflect a racial divide—just not the one we keep hearing about. The measure was trounced by voters across the state, including in Boston and other urban communities; it garnered its strongest support in a handful of wealthy, white communities. In Georgia in 2016, a who’s who of black leaders weighed in against a GOP-backed plan to scoop up the state’s lowest-performing schools, almost all of which were in black communities, into a New Orleans–style charter school system. Voters rejected the ballot measure by 20 points, and when Stacy Abrams ran for governor, she made her staunch opposition to the proposal, what she characterized as a GOP power grab, a key theme of her campaign. 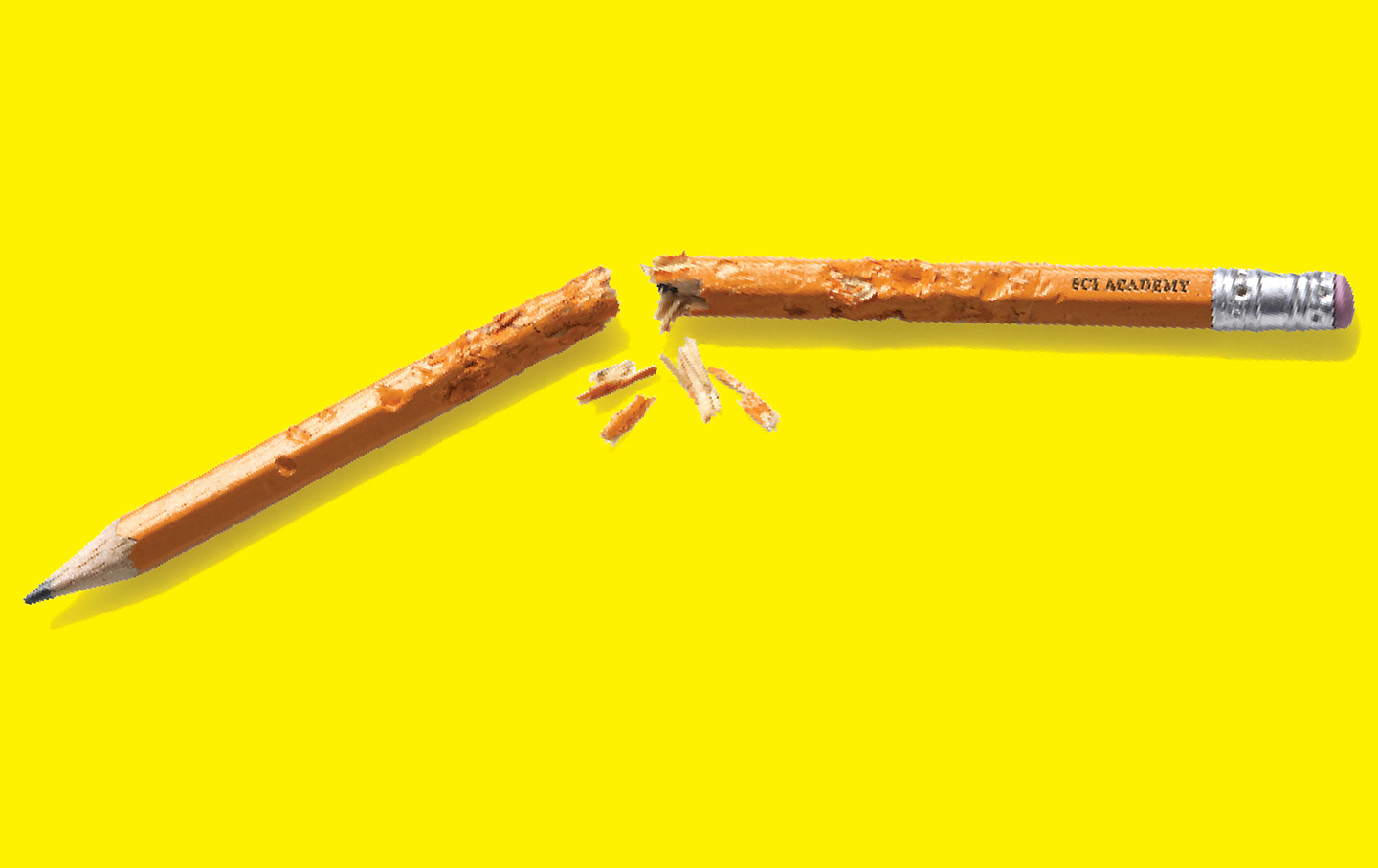 The Unmet Promises of a New Orleans Charter School

The real source of the divide in the Democratic Party over school choice has less to do with race than with politics and ideology. For the past three decades, the Democratic establishment has embraced more and better education as the sole fix for the country’s economic woes. An emboldened left wing now loudly rejects that view in favor of much more aggressive redistributionist policies, viewing the embrace of school privatization as just another in a long list of party missteps. The charter school wing, meanwhile, is also home to the centrist Dems and Wall Streeters who are the loudest opponents of the party’s left-wing tilt.

The school choice wars will only flare hotter in the weeks and months to come. In January, the Supreme Court will hear arguments in the most consequential voucher case in a generation, Espinoza vs. Montana Department of Revenue. With such right-wing heavies as former Wisconsin governor Scott Walker weighing in as “friends of the court,” the case takes aim at constitutional prohibitions on taxpayer funding for religious schools that are on the books in 35 states, essentially arguing that states must fund religious education. Meanwhile, Trump’s justice department, joining forces with Betsy DeVos, is siding with a Christian school that wants public funds but not gay students.

The Espinoza decision, which the court will hand down this summer, promises to be maximally disruptive—and not just because of its height-of-campaign-season timing. Forcing states to fund religious education is extreme culture-war stuff. And yet the plaintiffs who are demanding that Montana do just that cast their crusade in the familiar language of Obama-era charter school advocates: parent choice, civil rights, the moral imperative to provide poor families with the same choices that wealthy ones have. Decades into the right’s crusade for private school vouchers, the cause remains a political loser, rejected by voters again and again. Now the onus is on Democrats to make clear that they’ve finally gotten the message.