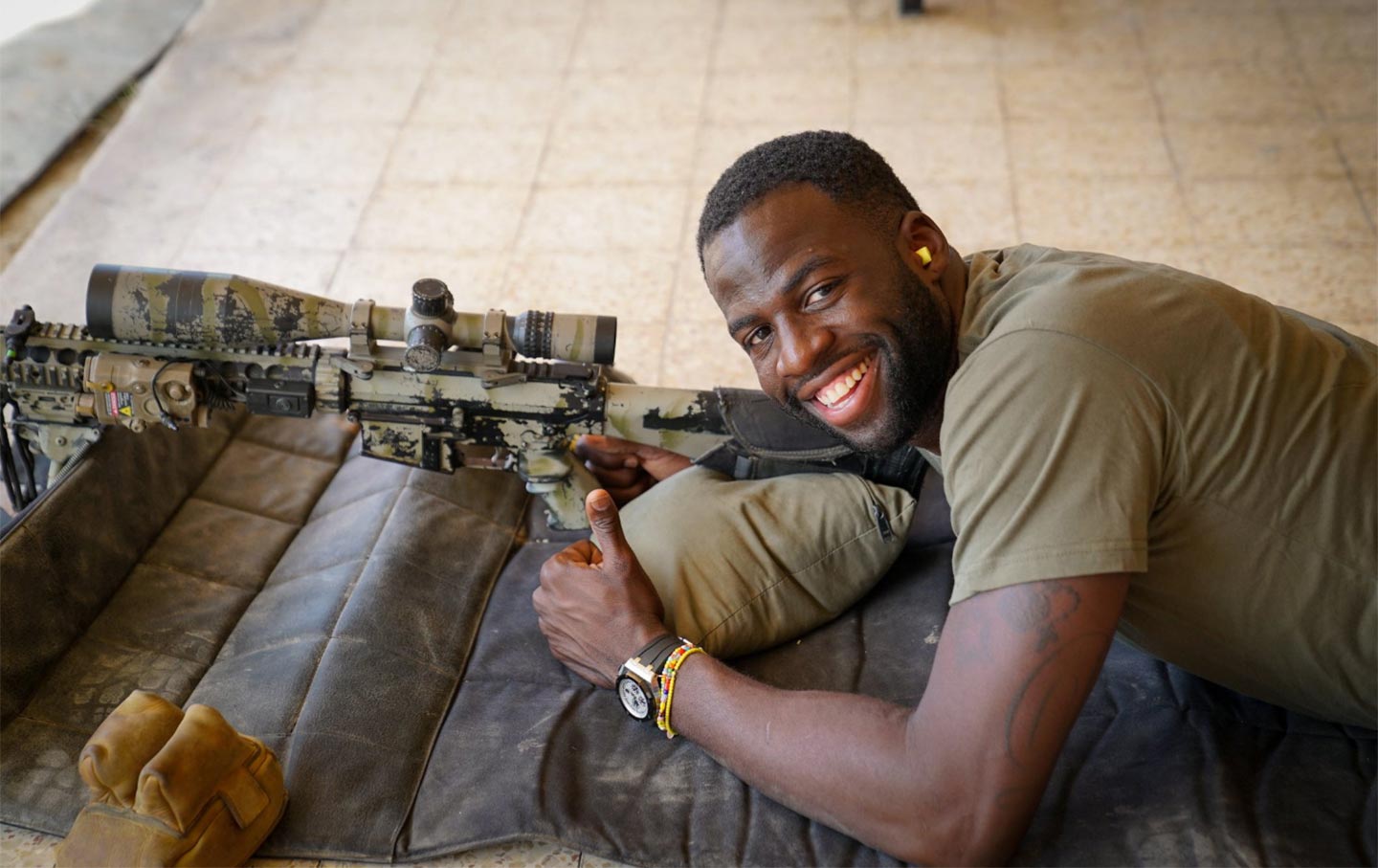 Draymond Green on a trip to Israel organized by Friends of the Israel Defense Forces. (@Orshkedy / Twitter)

The NBA Champion Golden State Warriors team has proudly symbolized resistance to Donald Trump. This is a squad that, for the second straight season, was ready to snub a White House visit—and then Trump, in a Twitter snit that inspired LeBron James to call the president a “bum,” rescinded an invitation that had never been accepted.

Many of the Warriors’ players had already gone on record to say that a photo op at the White House was not going to happen. One of the strongest statements came from All-Star forward Draymond Green, who took his reasons to CNN, saying, “It’s not about not seeing Donald Trump or anything else that goes with it, but more so about what we stand for. In order to effect change, you have to stand for something.”

He is absolutely correct. But it makes one wonder what he was standing for when he visited another president last week: President Reuven Rivlin of Israel. In a trip organized by Friends of the Israel Defense Forces, Green presented Rivlin with a Warriors jersey. As Rivlin said, “It’s not every day I meet an All-Star.” Green also visited the “Border Police’s counterterrorism unit” and shot some baskets with the unit on a court donated by the Michigan chapter of Friends of the IDF. Then Draymond Green posed as if he were a sniper, smiling for the camera, lying prone, flat on his stomach, holding a rifle. There is also footage of Green taking target practice with the police.

This, just like a White House visit would have been, was a propaganda visit, immediately tweeted out by Micky Rosenfeld, the Israeli Police Foreign Press Spokesman.

It is, frankly, shocking to see Draymond Green smiling and shooting guns in their company. These counterterrorism border police units are part of a military that shot and killed more than 60 Palestinians who were protesting at the border in May, less than two months ago. Palestinians were raising their voices not only against the decision of the United States to move its embassy to Jerusalem, but the daily reality of living in the open-air prison that is Gaza, surrounded by walls, checkpoints, and one of the most well-funded militaries on earth.

Imagine Green visiting the Ferguson police department while fires were still smoldering in 2014. He never would have done it, yet this visit was somehow fine: legitimizing a regime that just engaged in a massacre. It was exactly the kind of propaganda trip, embedded in the Israeli military and shielded from Palestinian life, that Michael Bennett and other NFL players refused to participate in last year, because of the parallels between the plight of Palestinians and the #blacklivesmatter struggle against police violence in the United States.

I asked Yousef Munayyer, the executive director of the US Campaign for Palestinian Rights, a coalition of 330+ groups that “works for a US policy toward Palestine/Israel based on freedom, justice, and equality,” for his analysis of the visit.

He said, “Draymond Green is the latest celebrity to be posterized by Israeli apartheid. It was a sad sight to see him collaborating with an effort aimed at normalizing Palestinian human-rights denial and selling it to his fans around the world. With great celebrity comes great responsibility, and unfortunately Draymond allowed his celebrity to be used in ways unbecoming of a champion of freedom, justice, and equality. I hope that he may reflect on this and that his peers in the sports world will learn from this and avoid at all costs any offers to normalize Israel’s abuse of Palestinians. The Israeli state has made the cooptation of American sports heroes into a key part of their strategy to appeal to demographics alienated by their human-rights abuses. The least our sports heroes can do is listen to the Palestinians asking them not to play along.”

Given the growing number of cultural and sports figures that have pulled out of visits to Israel because of these human-rights abuses, Draymond Green’s trip raises the uncomfortable question of “why?” Why go on a trip organized by Friends of the IDF? Why reject Donald Trump and accept the invitation of Rivlin? Why visit “counterterrorism border police units” so soon in the aftermath of the May massacre? We don’t have answers to these questions, but if Draymond Green is going to go on CNN to explain why he wouldn’t visit Donald Trump, there is no reason he shouldn’t answer these queries as well. Maybe they’ll be asked by his coach Steve Kerr, whose father, Dr. Malcolm Kerr, was one of the preeminent Western scholars of the Arab World. It is beautifully true that the Golden State Warriors have stood for using basketball and their voices as instruments of peace and justice. Draymond Green’s allowing himself used in this way stands as strongly counterposed to that very tradition.