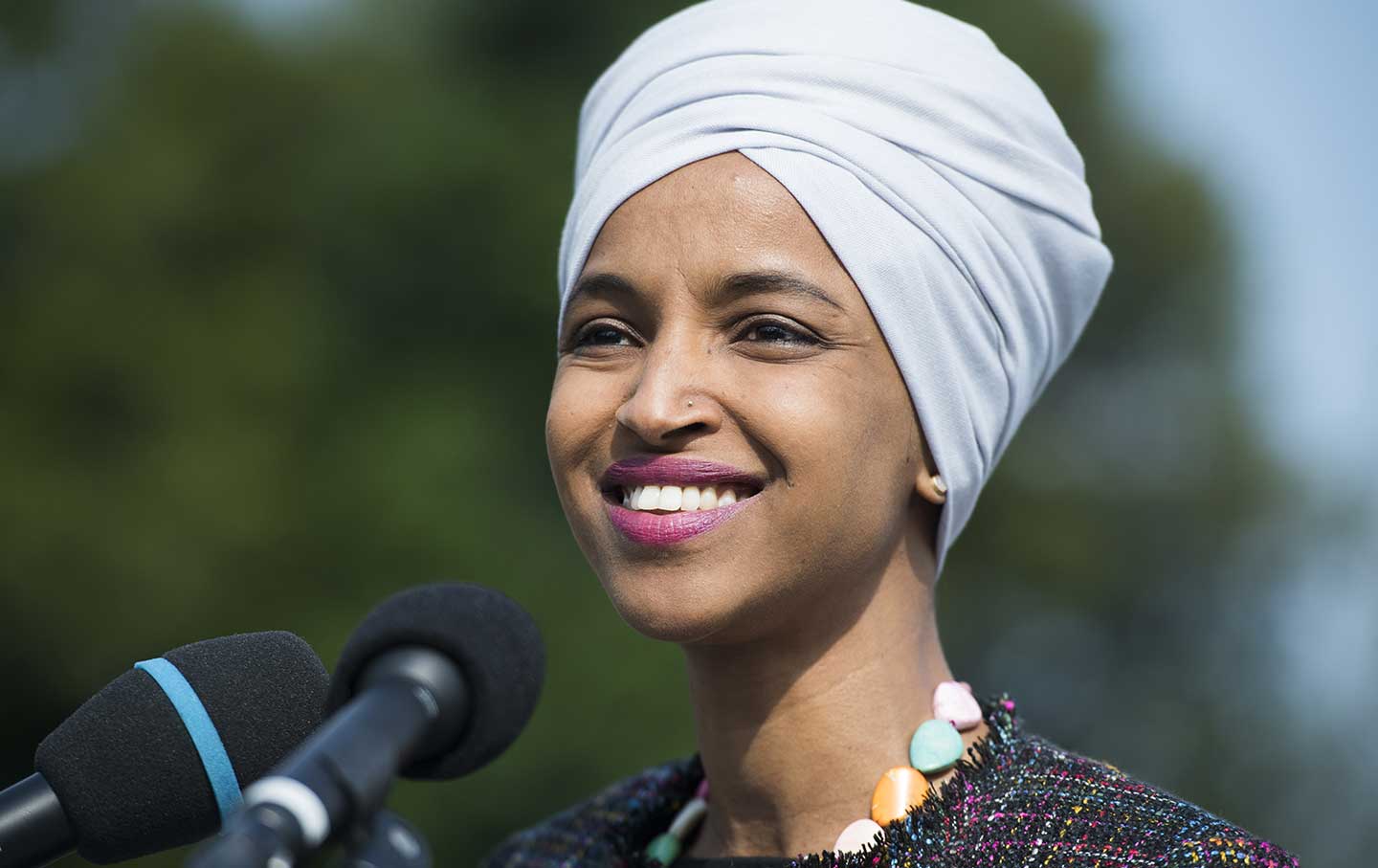 Representative Ilhan Omar attends a news conference at the House Triangle in Washington, DC, on legislation to create special immigrant visas for Iraqi and Afghan wartime translators on Thursday, May 16, 2019. (Photo By Tom Williams / CQ Roll Call via AP Images)

Before Donald Trump’s supporters began chanting “send her home” with regard to US Representative Ilhan Omar (D-MN) the president fed the fire with a reference to the congresswoman that seemed to suggest she despised them. “She looks down with contempt on the hard-working Americans, saying that ignorance is pervasive in many parts of this country,” declared Trump.

The president was referencing something Omar said in an interview we did with her earlier this year for The Nation’s Next Left podcast. The problem was that he was spinning what Omar actually said in ways that crudely distorted her message.

In the Next Left interview with Omar, we discussed her election to Congress in 2018 and her post-election declaration that “Here in Minnesota we don’t just welcome refugees and immigrants, we send them to Washington.” I asked her if she had intended to use her historic victory—as one of the first two Muslim women elected to the House, and as an American who came to the United States as a refugee from Somalia—to create a teaching moment.

Omar said she had, recalling that two years before her election to Congress, Trump had brought his 2016 presidential campaign to Minnesota and delivered what was widely seen as a divisive speech regarding refugees. She explained that “there’s this question right about what, what happens in a time where someone who was running for president, who eventually becomes president, has used his platform to demonize refugees and immigrants and to tell Minnesotans that they should not be as welcoming, and that without their knowledge, these people were just coming into their state. It sort of was a reminder that in Minnesota we didn’t just welcome refugees. We were proud enough to send them to Congress.”

Then we discussed how complicated immigration issues are too frequently reduced to soundbites, and about how debates regarding these issues are often manipulated for political purposes.

Here’s how the conversation proceeded:

The Nation: So suddenly you’re elected, and you had this teaching moment. It strikes me that, in watching you, you are conscious of teaching moments and of that opportunity to say something that might cause people to think differently about what’s going on.

Ilhan Omar: Right. I mean, I think people have a misconception about refugees and, and the process they go through to come to the United States. They certainly have been misinformed about the process of resettlement as well. And the Republicans are really good at misinformation and sort of really reorganizing facts to sort of paint a picture that really eventually is not rooted in fact. We had a person who was running for governor, and he kept talking about ending the resettlement program and making sure that that that wasn’t going to happen. And I remember I wrote this tweet and I said, you know, I wish that you would take the time to at least educate yourself about how the resettlement program works. There are agencies that run the resettlement program. This is, this is a process that’s run through them. If you end that contract, it’s not that refugees are not going to be resettled, it’s that the state just doesn’t get informed. And so the only leverage you have is that you are part of this contract and you can be part of the negotiations on how many people get resettled in your state. And so it is not that they might not be knowledgeable about this, but they use it as a tool to stir up hate and division. And ignorance really is pervasive in many parts of, of this country. And as someone who was raised by educators, I really like to inform people about things that they might be ignorant to, willingly or unwillingly.

But what Omar was actually talking about was the way in which politicians, in this case Republican politicians, manipulate information to achieve political ends. And about her interest in countering the misinformation, suggesting that, “as someone who was raised by educators, I really like to inform people about things that they might be ignorant to, willingly or unwillingly.”

If anything, Omar was putting her faith in the power of information, and dialogue with people who do not share her views. She was talking about challenging the politicians who foster misconceptions about refugees, and about presenting information that might counter those misconceptions—not about insulting voters.

Yet there was the president on Wednesday, telling a crowd that Omar “looks down with contempt on the hard-working Americans, saying that ignorance is pervasive in many parts of this country.” Omar was not “looking down with contempt on hard-working Americans.” That was not her message, as Trump would have understood if he had sincerely listened to a podcast conversation in which Omar went out of her way to talk about opening up and encouraging honest debates. The problem is that this president isn’t interested in getting things right when he discusses Omar. Be every indication, he is determined he get it wrong.

The truth is that Ilhan Omar talks with a lot of Republicans, in Congress and in Minnesota. They don’t always agree, just as Omar and her fellow Democrats don’t always agree. From what I have seen, however, as someone who has followed Omar’s political career for a number of years, she treats people of different political partisanships and ideologies with a good deal of respect. And she maintains a faith that the sharing of facts and honest dialogue might move many people on many issues. Unfortunately, the president of the United States gives no indication that he shares this faith.