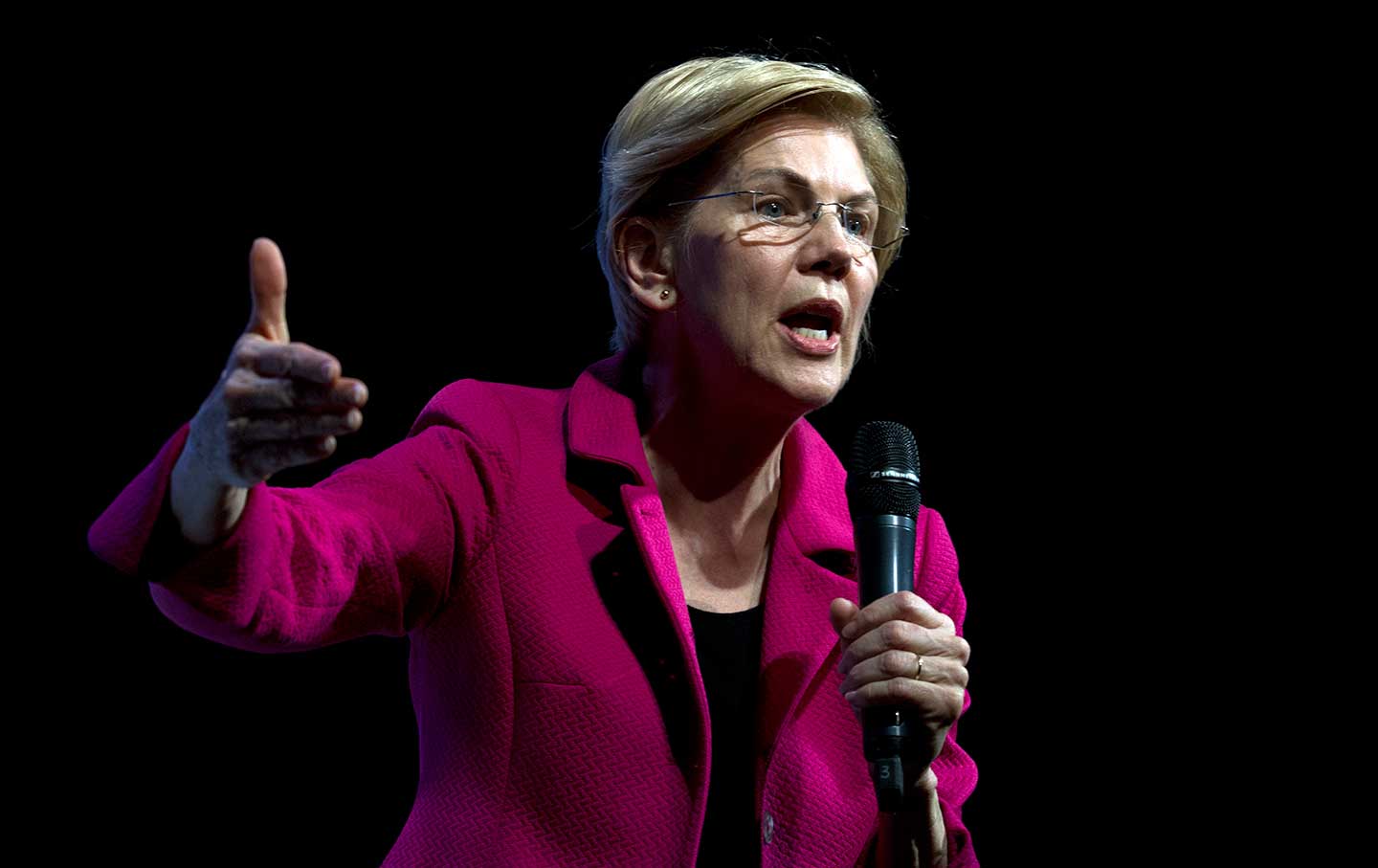 Elizabeth Warren speaks during the We the People Membership Summit at the Warner Theater in Washington, DC, on April 1, 2019. (AP / Jose Luis Magana)

“Democracy is coming to the USA,” Leonard Cohen promised a quarter-century ago. Cohen is gone, but we’re still waiting. It’s easy to blame Republican legislators and conservative jurists, with their voter-suppression schemes and assaults on the Voting Rights Act.

But the right-wing partisans who seek to roll back popular sovereignty are only part of the problem. For too long, Democrats have been too cautious about expanding the franchise—and about fully realizing its potential to transform the governance that extends from it.

The 2016 presidential election offered a reminder of just how much work remains to be done to guarantee the right to vote and, as important, to ensure that the will of the people is reflected in our election results. Donald Trump lost the popular vote by 2.9 million ballots, yet he assumed the presidency after securing the electoral votes of Michigan, Pennsylvania, and Wisconsin. Trump did not win a majority of the vote in those states, but he got just enough of a plurality to claim an Electoral College “victory” that in most countries would not have been a victory at all. Democrats in positions of power should have made the elimination of the Electoral College a priority long ago—and they should have made it mission-critical after the 2000 election, when Al Gore won the popular vote, only to see George W. Bush surf a dubious “win” in Florida to an Electoral College coronation. But Democrats were slow to respond, seeming to lack a basic sense of what was at stake. Until now.

At a March town-hall meeting in Mississippi, Senator Elizabeth Warren declared, “Every vote matters, and the way we can make that happen is [to] have national voting, and that means [getting] rid of the Electoral College.” The crowd responded with what The New York Times described as “one of her longest ovations of the night.” 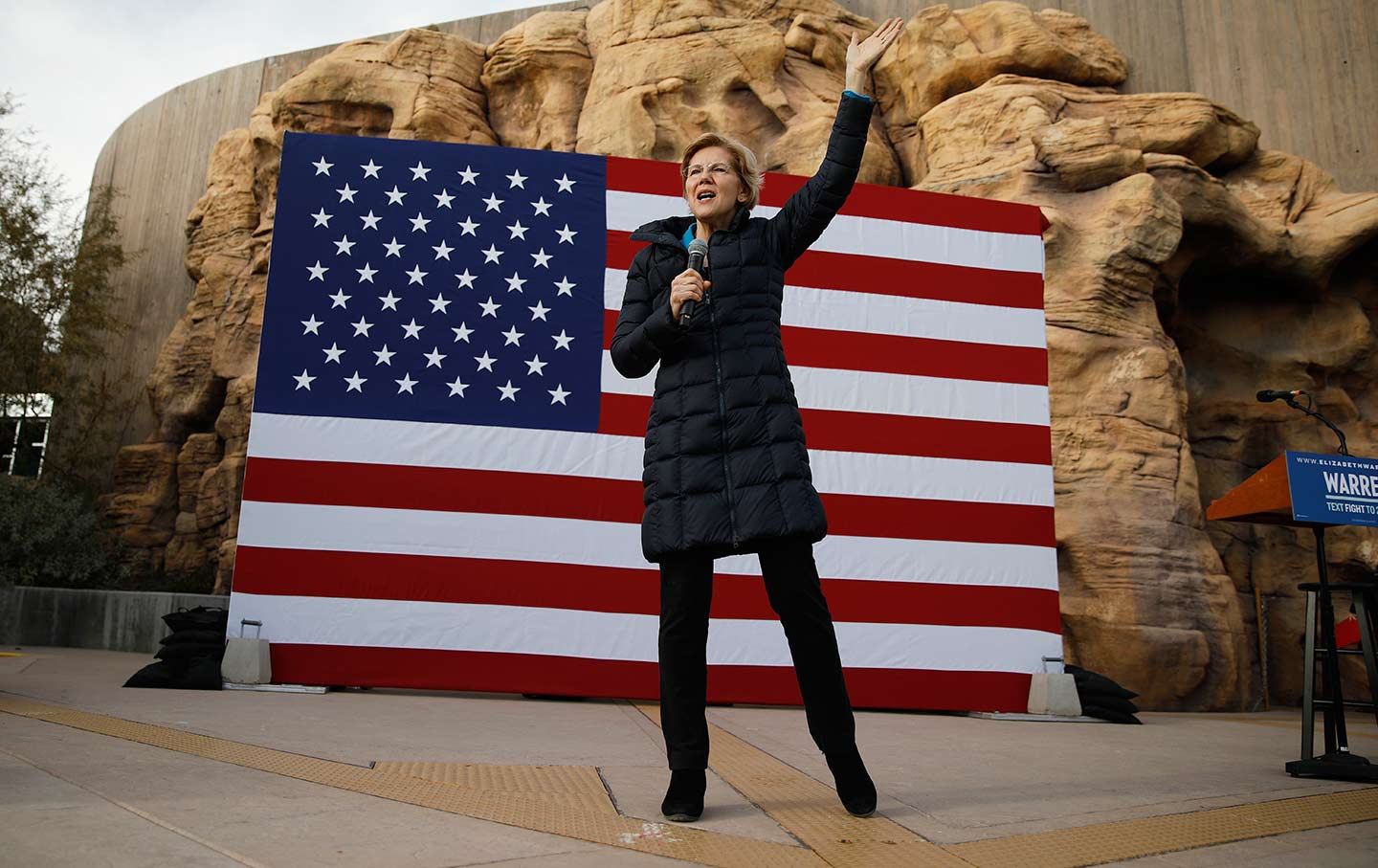 Elizabeth Warren Gets the Argument Against the Electoral College Exactly Right

Warren, who also says that “we need a constitutional amendment that protects the right to vote for every American citizen and to make sure that vote gets counted,” is not the only presidential contender going big on democracy issues. Senator Kirsten Gillibrand is backing an amendment to “abolish the Electoral College” introduced by Senator Brian Schatz, while Senators Kamala Harris, Cory Booker, and Bernie Sanders have signaled their willingness to address the Electoral College’s anti-democratic impact, as have former representative Beto O’Rourke and former housing secretary Julián Castro. Possible presidential contender Pete Buttigieg, the mayor of South Bend, Indiana, says: “The Electoral College needs to go, because it’s made our society less and less democratic.” Buttigieg sees that move as part of a democracy agenda that includes ending gerrymandering, extending voting rights, and, probably, amending the Constitution to reverse the damage done by the Supreme Court’s 2010 Citizens United decision. (Sanders has already proposed amendments to overturn Citizens United, which he decries as “one of the most disastrous decisions in [the Court’s] history.”)

This bolder level of ambition is finding expression in Congress, where Senator Jeff Merkley has been championing amendments and legislative action to guarantee equal representation for every American. In combination with the For the People Act—which John Sarbanes and other House Democrats have advanced to extend voting rights, guard against partisan gerrymandering, and limit the influence of big money in our politics—Merkley and Senator Tom Udall have introduced bills that are designed to create what Merkley refers to as “We the People” democracy. With Udall, he’s proposing a constitutional amendment to abolish the Electoral College and a plan to establish a commission to develop proposals for providing citizens of the District of Columbia, Puerto Rico, and the territories of Guam, the US Virgin Islands, American Samoa, and the Northern Mariana Islands with full voting representation in Congress.

The latter proposal is vital for a country that began with a revolt against colonialism. It is shocking, at this late stage in the American experiment, that roughly 4 million US citizens are denied voting representation in Congress. Merkley knows there will be pushback from Republicans, and perhaps even from some within his own party. But he reminds us that “we need real, equal representation if we want a government that responds to the big issues impacting working families’ lives.”

What Senator Merkley understands is something that must be recognized by every Democrat who seeks the party’s presidential nomination in 2020, and by every progressive who bids for a House or Senate seat. We have entered an era of bold proposals for a Green New Deal, Medicare for All, a doubling of the federal minimum wage, and tuition-free college. But to secure the change sufficient to achieve economic, social, and racial justice, we must also make the structural reforms that will bring full democracy to the United States.