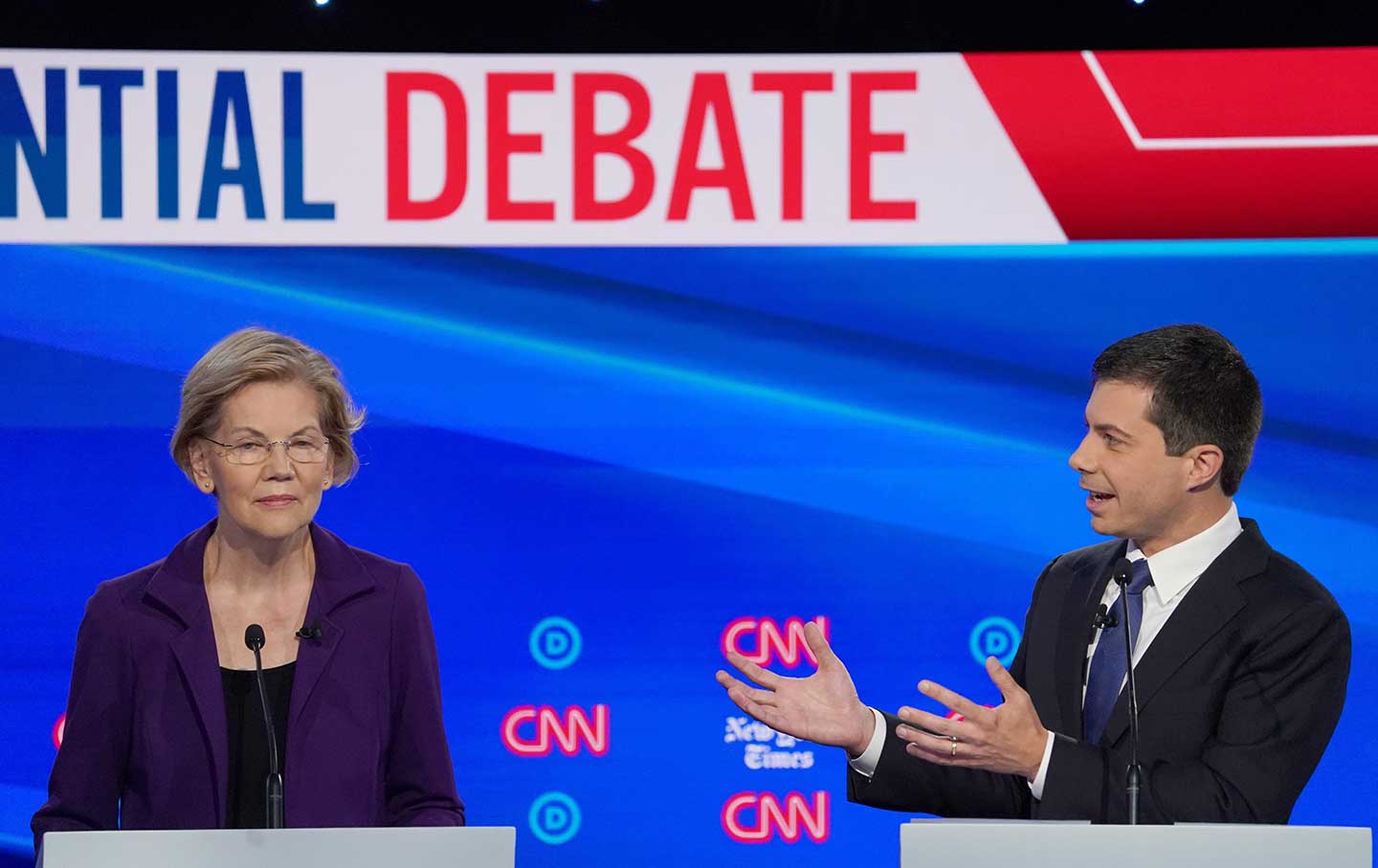 There were 12 Democrats on the stage in Ohio on Tuesday night, more than enough for a sports team, although too large a cast for an effective drama. With a dozen voices contending to be heard, it was impossible for the three leading candidates—Bernie Sanders, Elizabeth Warren, and Joe Biden—to dominate the conversation or engage in extended arguments. Instead, the crowded field divided into two major teams, the left and the moderates. Sanders and Warren commanded the left team, but they were occasionally helped out by Julián Castro, Cory Booker, and, surprisingly, billionaire Tom Steyer, who agreed with Sanders’s contention that the rich have too much power in American society. Tulsi Gabbard was the wild card of the group, supporting the left team on many occasions but occasionally veering off on her own, as in her willingness to accept unspecified restrictions on reproductive freedom.

The moderate Democratic team was larger, led by Joe Biden but also including Kamala Harris, Pete Buttigieg, and Amy Klobuchar. Beto O’Rourke and Andrew Yang were the wild cards on this side, occasionally taking hard-line or outlier positions, but basically agreeing with the moderate team’s emphasis on national unity, civility, and the need to avoid radical change. Yang’s advocacy of the Universal Basic Income was more far-reaching than any other position on the moderate side, but it fell far short of Sanders’s call for a federal job guarantee. Similarly, O’Rourke’s strong position on gun control shouldn’t mask the fact that he’s not on board with any fundamental changes in the economic order.

New York Times columnist Jamelle Bouie noted that “one consistent thread in these debates is how Castro (and Booker, to a lesser extent) regularly play the assist to Warren.” One way to think about this pattern is that Castro and Booker are auditioning to be vice-presidential picks if Warren is the nominee. Similarly, by sniping at Warren, Buttigieg was auditioning to be Joe Biden’s running mate.

As in the earlier debates, Sanders and Warren are clearly the intellectual leaders of the field, the ones who are defining the direction of the party with bold ideas like Medicare for All. Tellingly, the moderates often say they share the goals of these ideas, but they demur about the execution and emphasize the need to unify the nation against Donald Trump.

Arguing with Warren, Buttigieg said, “And I don’t understand why you believe the only way to deliver affordable coverage to everybody is to obliterate private plans, kicking 150 million Americans off of their insurance in four short years, when we could achieve that same big, bold goal—and once again, we have a president—we’re competing to be president for the day after Trump. Our country will be horrifyingly polarized, even more than now, after everything we’ve been through, after everything we are about to go through, this country will be even more divided. Why unnecessarily divide this country over health care when there’s a better way to deliver coverage for all?”

Amy Klobuchar also emphasized that she shared Warren’s goals even if she disagreed with how to achieve those goals. “You know, I think simply because you have different ideas doesn’t mean you’re not fighting for regular people,” Klobuchar said. “So just because we have different ideas, and get to the same place in terms of beating Donald Trump and taking this on, we are in Ohio. We can win Ohio in the presidency, but only if we unite, if we unite around ideals and don’t go fighting against each other and instead take the fight to him.”

The recurring rhetorical move of the moderates is to concede that the goals the left wants are admirable and suggest that there are less divisive ways to get the same results. The problem with this argument is that in the polarized America of 2019, with Donald Trump regularly accusing Democrats of treason, the goal of conciliation seems utopian. Democratic voters very clearly want a fighter, which is one reason Warren is on the cusp of becoming a front-runner. Sanders, too, although he’s running third, has a solid base made up of one in six Democratic voters. On the moderate side, only Joe Biden has taken off, and his appeal is reliant on a nostalgia for the Obama era.

In terms of setting the policy goal, there’s only one team winning in the Democratic primaries: the left.