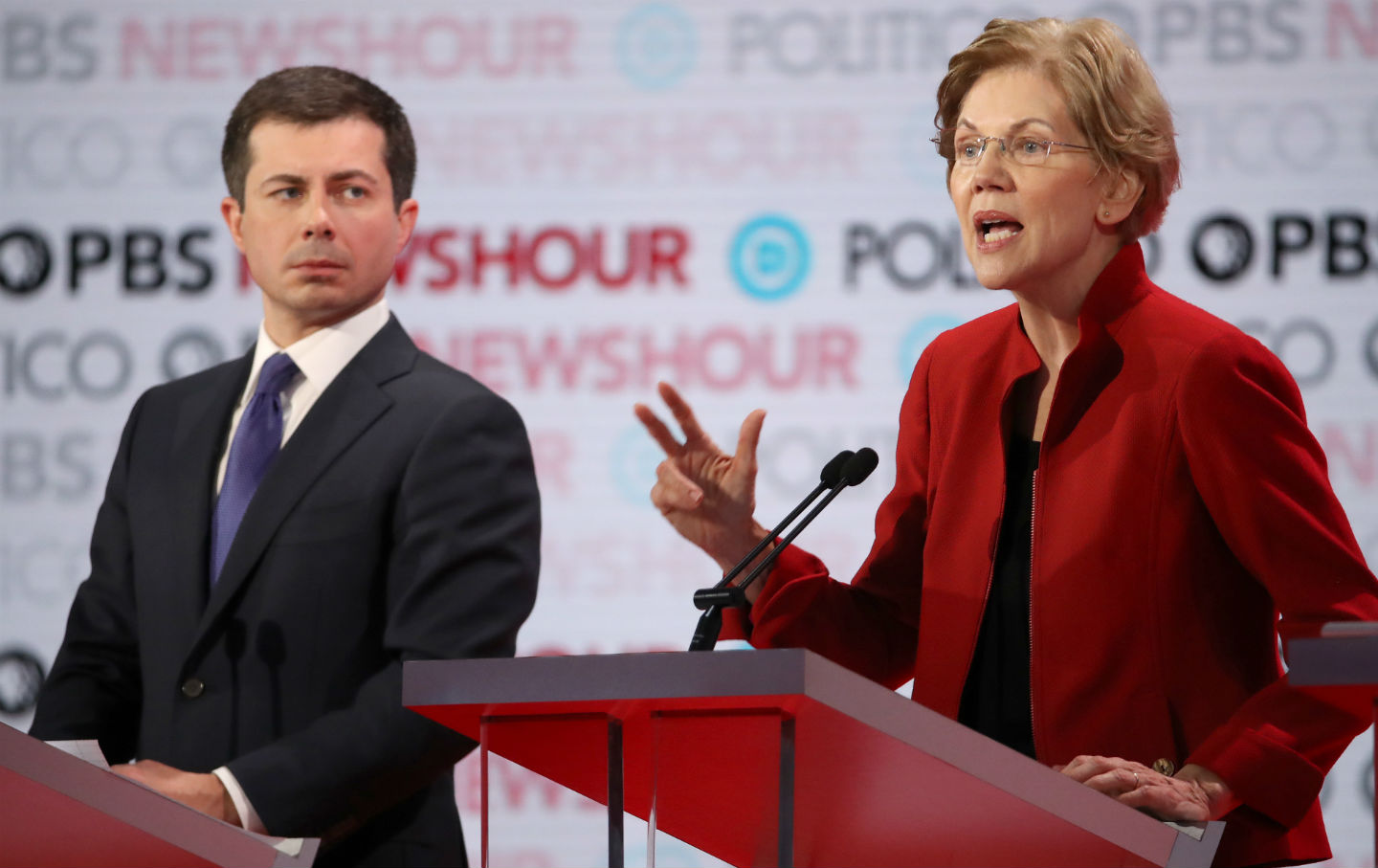 If adversity builds character, then Pete Buttigieg came out a strong man after Thursday night’s debate among Democratic contenders. He suffered the arrows of criticism more than any other candidate, absorbing rebukes from other rivals like Elizabeth Warren, Bernie Sanders, and Amy Klobuchar.

At first glance, Buttigieg might not seem like someone who is worth going after. According to the Real Clear Politics aggregation of the polls, Buttigieg is a distant fourth in the national standings. He has the support of only 8.3 percent of Democrats, putting him far behind Joe Biden (27.8 percent), Bernie Sanders (19.3 percent), and Elizabeth Warren (15.2 percent).

But those national numbers hide the reality of Buttigieg’s surge in the early states, particularly Iowa. One poll put him as the front-runner in that state, with 24 percent support, ahead of Sanders (21 percent), Warren (18 percent), and Biden (15 percent). Buttigieg has put together an ideologically diverse coalition that has been taking votes away from both moderates like Biden and Amy Klobuchar and progressives like Warren and Sanders in early states.

There’s a personal issue, as well. Buttigieg is the youngest figure on stage and the front-runner with the least political experience. For figures like Klobuchar, Warren, and Sanders, there is likely to be some understandable feeling that Buttigieg simply hasn’t earned his spurs. He’s callow and has a thin résumé. It’s one thing to lose a presidential nomination to a fellow senator, another to lose it to the mayor of a midsize Indiana city.

Klobuchar, in particular, highlighted the experience gap. Taking offense at Buttigieg’s complaints that his opponents were Washington insiders who sat on committees, Klobuchar listed the legislative achievements of rivals like Biden, Warren, and Sanders. Then she said, “So while you can dismiss committee hearings, I think this experience works. And I have not denigrated your experience as a local official. I have been one. I think you should respect our experience.” Buttigieg responded, “You actually did denigrate my experience, senator, but it was before the break and I was going to let it go because we got bigger fish to fry here.” Klobuchar retorted, “I don’t think we have bigger fish to fry than picking a president.” She later called attention to the fact that he lost a statewide race in Indiana by 20 points.

Buttigieg also crossed swords several times with Elizabeth Warren. After he rejected proposals Warren and Sanders put forward for free college for all because it would benefit the children of millionaires and billionaires, Warren responded, “Look, the mayor wants billionaires to pay one tuition for their own kids. I want a billionaire to pay enough to cover tuition for all of our kids.”

Warren also called attention to a recent fundraiser Buttigieg held at a California wine cave. “The mayor just recently had a fundraiser that was held in a wine cave full of crystals and served $900-a-bottle wine,” the Massachusetts senator said. “He had promised that every fundraiser he did would be open door and this one would be closed door.” Warren added, “We made the decision many years ago that rich people in smoke-filled rooms would not pick the next president of United States. Billionaires in wine caves should not pick the next president of the United States.” Sanders echoed many of these themes in his remarks.

Buttigieg responded with a slippery claim that he was the only one on stage who wasn’t a millionaire or billionaire. But that’s true only because of his youth. He’s likely to be quite wealthy when he’s the age of Bernie Sanders or Elizabeth Warren. In fact, as the child of two university professors, Buttigieg grew up wealthier than almost anyone on the stage. Further, pointing to his relative wealth did nothing to address the issue that his fundraising is coming from wealthy donors.

Buttigieg didn’t handle the attacks well. As Boston Globe columnist Michael Cohen noted, “Buttigieg was the weakest. He looked prickly and defensive.” A focus group led by pollster Frank Luntz found that most thought Bernie Sanders won the night, but nobody said the same about Buttigieg. If the goal of the other candidates was to sabotage Buttigieg’s campaign, they might have succeeded.