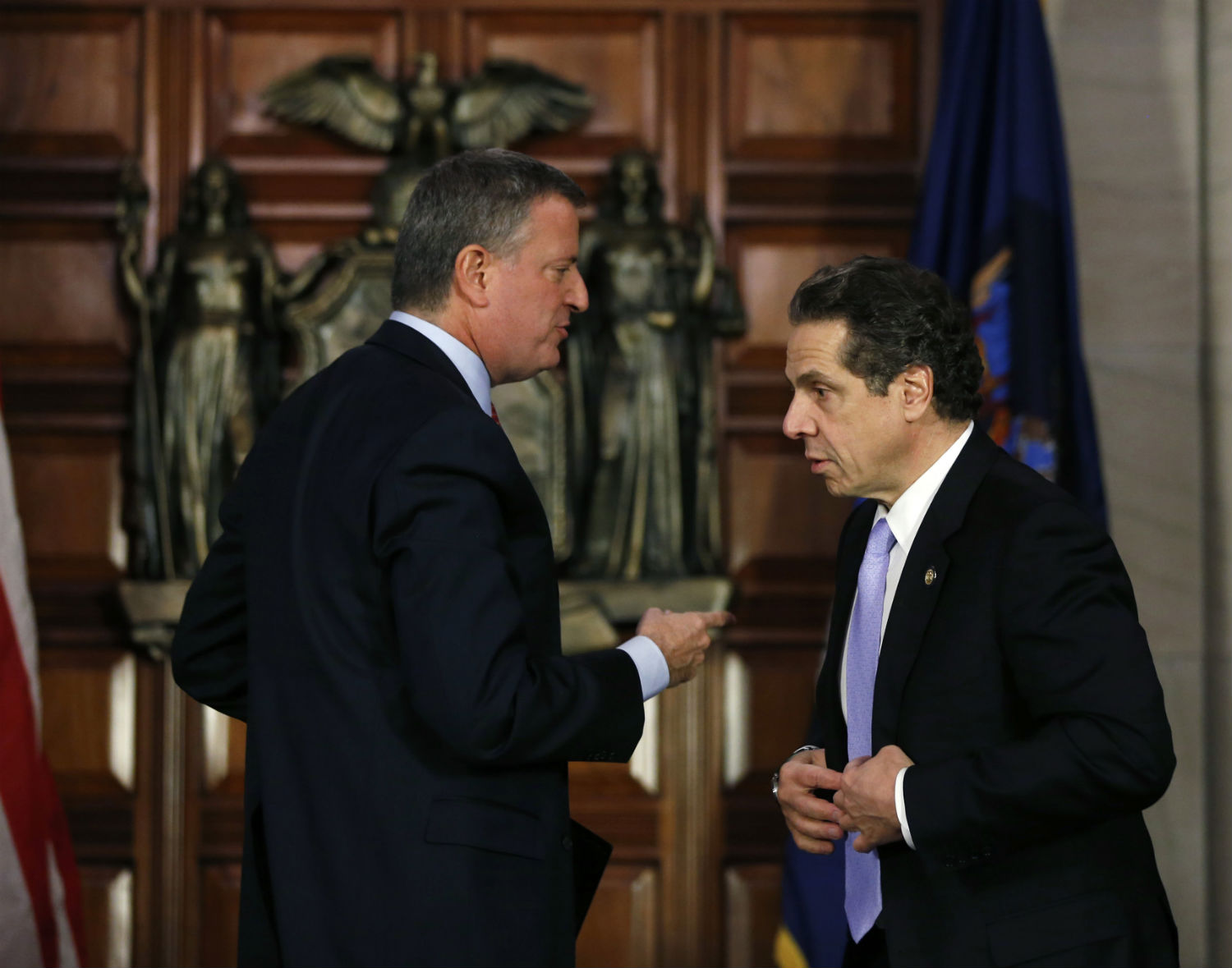 Andrew Cuomo’s State of the State address last month ended in an E pluribus unum refrain: New York is upstate and downstate, Latino and black, Republican and Democrat, folders and wrappers, but, the governor said, “We are one … We are one.” The crowd ate it up.

Now that theme of unity has become Cuomo’s attack line against New York City Mayor Bill de Blasio’s call for a higher minimum wage in the five boroughs. Like his plan for a tax on high earners to pay for expanded universal pre-K and middle-grade after-school programs, the wage hike—which de Blasio laid out in his State of the City speech on Monday—requires Albany approval, something Cuomo isn’t likely to give. He told a radio show yesterday:

“We are also one state and we don’t want to cannibalize ourselves. We don’t want to have different cities with different tax rates competing amongst themselves. … Albany has one tax rate and then Schenectady has a different tax rate because Schenectady is trying to steal business from Albany. Or they have different wage requirements or different labor laws. … This could be a chaotic situation. So the balance is very important. And that’s what the constitution tries to establish, the balance. A common set of primarily economic factors within a state. And then let the states compete. … That competition within the state, however, I do not believe would be productive. I don’t want to see Buffalo trying to steal from Syracuse trying to steal from Albany.”

Cuomo’s concern about chaos resembles legitimate anxiety about a race to the bottom: competition in the past thirty years among countries and states—vying for who can offer the lowest wages, highest subsidies and fewest workers’ rights—has harmed workers and government budgets.

The trouble is, de Blasio isn’t engaged in a race to the bottom. He’s trying to raise the floor. His call to hike taxes and raise wages is not an attempt to undercut Yonkers or Rochester or Buffalo.

It’s true that having different minimum wage levels in different parts of the state will complicate the marketing pitch the Empire State makes to businesses and workers we’re trying to lure here. But that’s more theory than threat. Businesses don’t really consider whether to move to New York State as a whole, as in the entity running from Montauk to the Canadian border. They consider whether to move to a particular part of the state. And each area in the state presents different advantages and disadvantages.

In fact, there’s already a lot of local variety in taxes and wages. New York City and Yonkers have an income-tax surcharge. Property taxes vary greatly among municipalities: A 2011 report by the Empire Center found that Sagaponack in Suffolk County taxed property at $1.32 per $1,000, while Wellsville, in Allegany County, had a rate of $62.20. On the wage side, the prevailing wages that union workers get (which affect more than just the construction trades, because they impact other businesses’ building costs) differs depending on where you are. Meanwhile, some government contractors in New York City are required to pay a living wage, a mandate that does not exist elsewhere in the state.

The reason for the disparities is simple: Midtown Manhattan is a long way from Cooperstown. Different cities face vastly different circumstances and need to tailor some policies to reflect that. This is why Cuomo in 2012 pledged special state aid to Buffalo, and not to Syracuse or Troy.

If Cuomo doesn’t like a hike in the minimum wage because he doesn’t think it should be higher, he can make the argument that it will reduce employment or help middle-class teenagers more than poor people (though those arguments are weak in their own ways).

If he doesn’t want differences in the minimum wage among different parts of the state, however, there’s a better solution than blocking de Blasio: raise it everywhere.