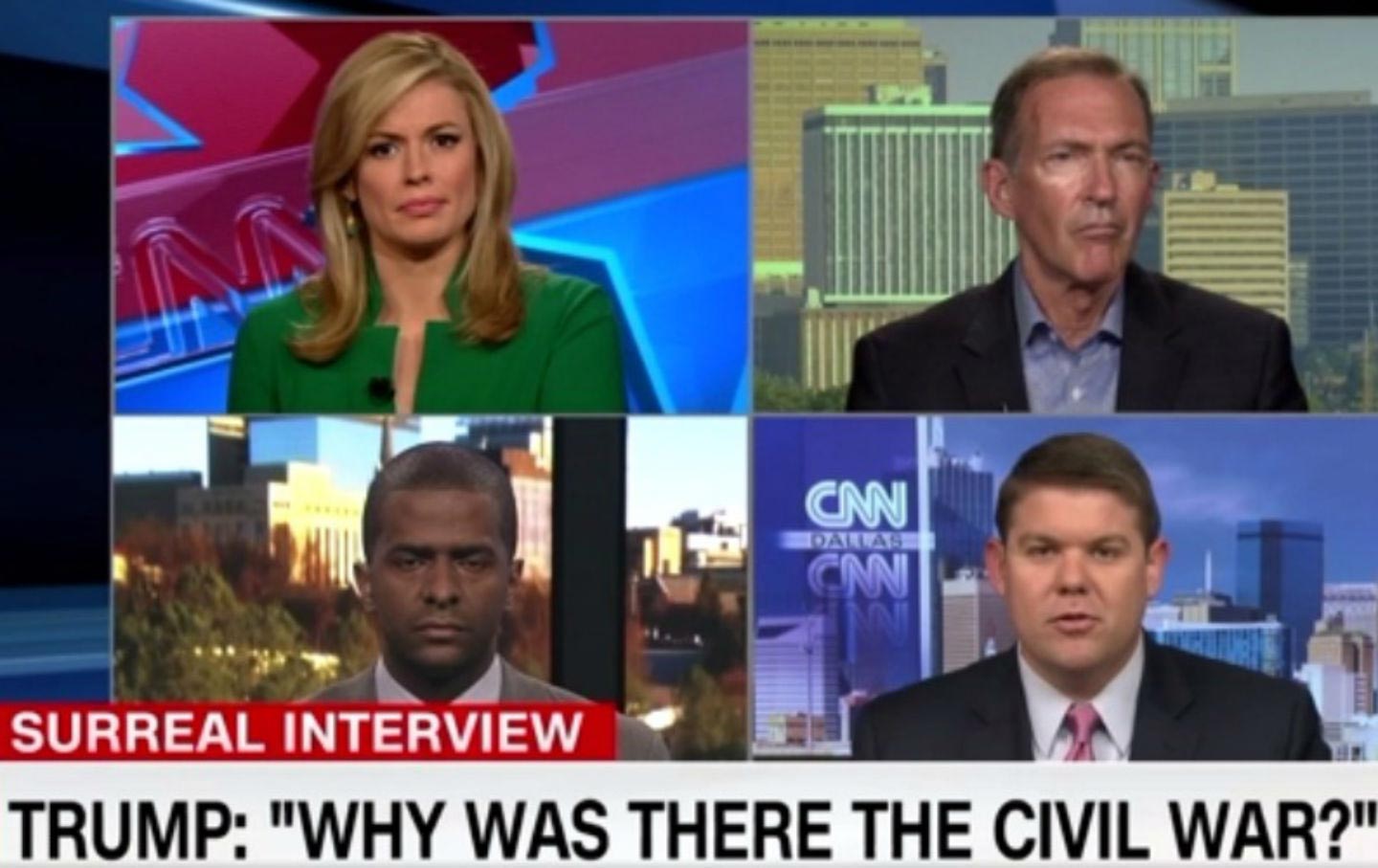 Last week, when CNN reported that Attorney General Jeff Sessions had left a couple of meetings with Russian officials off his application for a security clearance, Representative Jeff Duncan (R-SC) falsely claimed that the broadcaster had later retracted the story. In a Facebook post, Duncan, who is not known for having the keenest intellect on Capitol Hill, wrote, “The media was never this critical to President Obama, the recent Harvard study proves that the media has applied a completely different standard to President Trump.”

Duncan, like many on the right, sees a recent study of the mainstream coverage of Trump’s first 100 days in office released by Harvard’s Shorenstein Center on Media, Politics, and Public Policy as solid proof that the media treat Trump unfairly. It looked at news reports “in the print editions of The New York Times, The Wall Street Journal, and The Washington Post, the main newscasts of CBS, CNN, Fox News, and NBC, and three European news outlets,” and found that 80 percent of Trump’s coverage by those outlets was negative—significantly higher than the shares for Barack Obama (41 percent negative), George W. Bush (57 percent), and Bill Clinton (60 percent) at this point in their presidencies. Conservative publications greeted the report with headlines like “Harvard Study Confirms Media Bias Against Trump” and “Harvard Report: There Is A Huge Anti-Trump Bias In Corporate Media.”

The obvious response is that the vast majority of stories about famine, natural disasters, and genital warts are negative, and that doesn’t imply a bias on the part of those writing them. Trump’s young presidency has been a train wreck, his White House has been mired in largely self-inflicted scandals, and his legislative agenda has so far gotten nowhere in Congress. And Trump, unlike his predecessors, has a penchant for impulsively tweeting dubious claims and inflammatory nonsense. The study also found that the sheer volume of Trump coverage—he was the subject of four of every 10 news stories in the outlets studied—dwarfs that of previous administrations.

But that’s not the real story. The real story is that Trump’s negative coverage is being driven not by liberals or Democrats but by law-enforcement sources and pissed-off Republicans.

It’s important to understand the study’s methodology. According to its author, Harvard scholar Thomas Patterson, “Tone is judged from the perspective of the actor,” the actor being, in this case, Donald Trump. A story is coded as negative when “the actor is criticized directly”—for example when Senate minority leader Chuck Schumer told a reporter, “Eleven weeks into his administration, we have seen nothing from President Trump on infrastructure, on trade, or on any other serious job-creating initiative”—or when “an event, trend, or development reflects unfavorably on the actor.” So negative stories are either stories that quote someone griping about Trump, or stories about developments that cast a negative light on his performance.

And here’s a key point, as it relates to that first category: “Republican voices,” wrote Patterson, “accounted for 80 percent of what newsmakers said about the Trump presidency, compared to only 6 percent for Democrats and 3 percent for those involved in anti-Trump protests.” So the coverage has not featured a bunch of liberals complaining about Trump—Democrats and those engaged with the anti-Trump resistance were few and far between. “The fact that Trump has received more negative coverage than his predecessor is hardly surprising,” the report says. “The early days of his presidency have been marked by far more missteps and miss-hits, often self-inflicted, than any presidency in memory, perhaps ever.”

Stories about events that reflect poorly on the White House have in large part been driven by leaks (a fact that infuriates Trump and his supporters). We can’t know the ideological breakdown of the people speaking to reporters anonymously, but we do know that Trump’s own staff—people close to him—have been the source of a number of negative stories, and we know, thanks to White House leaks, that Trump’s staff often leaks information to the press because, as the very conservative Erick Erickson reported, “sometimes the president will not take advice. Sometimes the president treats suggestions as criticism. More often than not, the president is vastly more interested in what the media says about him than what his advisers in his employ say to him.” According to Erickson, who personally knows “an ardent Trump supporter” in Trump’s orbit who was the source of one such leak, “White House staff have ample incentive to leak to the press when they believe the president needs to pay attention or be admonished.” Just think for a moment how often you’ve read a story in which an anonymous source criticizing the president is identified as a current or former supporter or adviser or donor.

Law-enforcement and intelligence agencies have been the other big source of leaks. They’re not all right-wingers, of course, and their motives for leaking include, depending on how you look at it, either revenge for Trump’s many assaults on the intelligence community, or a principled defense of institutions they see as vital to our national security. Neither of those things represents ideological bias.

One might certainly argue that many of the Republicans who dominate the public discourse about Trump were hostile towards his presidency from the beginning. Prominent #NeverTrump conservatives like Ana Navarro, Stuart Stevens, David Frum are easy to find on cable TV and social media. But when a reporter doing her best to cover the president fairly sees similar criticisms coming from both the left and the right, when her story reflects those views, it’s not a matter of bias. That’s how he said-she said journalism, for all its obvious flaws, has always worked.

Ironically, the Shorenstein study did find significant bias at one media outlet: Fox News was a lone outlier in that almost half of its Trump coverage was positive. Looking back at 100 days marked by chaos and failure, it’s hard to imagine what a truly fair and balanced news outlet possibly could have covered in order to run so many positive segments.