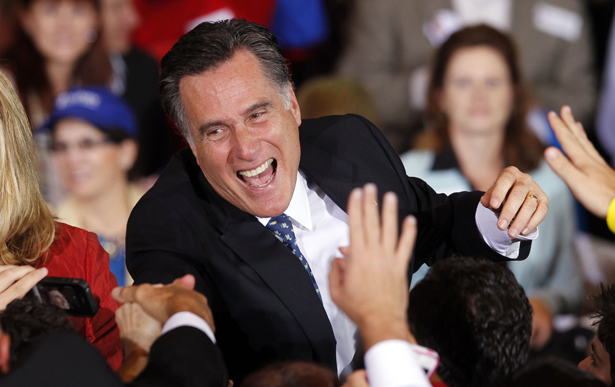 The lack of a GOP front-runner for the 2016 presidential race was underscored at a gathering in Utah this weekend hosted by former GOP standard-bearer Mitt Romney. A slew of Republican hopefuls trekked to ski country for an “issues forum” that was in fact yet another audition for support from billionaire investors, other Wall Street moneymen and corporate executives, many of whom raised the $1 billion that funded Romney’s 2012 campaign.

But despite the efforts of these presidential hopefuls, the talk floating through the corridors was of drafting Romney again.

“Instead, the scene at a luxury resort in the Rocky Mountains quickly became a Romney revival,” as The Washington Post reported:

Minutes after the 2012 Republican presidential nominee welcomed his 300 guests, Joe Scarborough, the MSNBC host and former GOP congressman, urged them to begin a “Draft Romney” movement in 2016.

“This is the only person that can fill the stage,” Scarborough said at the opening-night private dinner, according to attendees…Yet in hallway chats and over cocktails, they’ve been abuzz about recruiting someone else—Romney—into his third presidential race. “Everybody realizes we’re devoid of leadership in D.C.,” said Harold Hamm, a billionaire energy investor who was one of Romney’s biggest fundraisers in 2012. “Everybody would encourage him to consider it again.”

The buzz about Romney was also picked up by the Associated Press, which noted that his effort to shape the Republican field “is fueling whispers about a third presidential run.”

And NBC News also described the angst among the influential GOP donors:

But the cloudless sky outside belied the quiet anxiety and confusion indoors: Six months from the unofficial start of the next presidential campaign, is there anyone in the Republican Party who could take on Clinton?

The answer is so unclear that one name kept coming up: Mitt Romney, the man who couldn’t beat President Barack Obama.

The talk of another Romney campaign, especially at this point in the election cycle, underscores the degree of disarray within the Republican Party. It means the GOP nominee will have a late start, compared to previous elections, in raising money and building state operations—as the Los Angeles Times noted:

At this time in the last presidential election cycle, top donors for Mitt Romney were quietly building the invisible network that would vault him to the nomination and raise more than $1 billion for his 2012 effort. Nothing like that is happening this year, as the 2016 contest looms…

“Usually people get out early. But it’s not happening,” said Al Montna of Yuba City, Calif., a rice farmer who was an early member of Romney’s 2012 finance network. And in many cases, donors here in Park City said they were fine with that—because they are in no rush to take sides…

That stands in stark contrast to the last two cycles, when Romney’s campaign was already locking down state and regional finance organizations and lining up early donations.

Christie, who has been trying to put Bridgegate and other scandals behind him, nevertheless continues to be dogged by them. Romney introduced him in Utah with clips from Christie’s dance gig last week on The Tonight Show with Jimmy Fallon, part of Christie’s effort to reassert himself on the national scene after shying away when the scandals first broke. But when he took questions, Christie was almost immediately asked about Bridgegate and tried to make light of it:

As the New Jersey governor mingled with some of the Republican Party’s most influential fundraisers at Mitt Romney’s three-day political retreat here in Utah, there was still palpable uneasiness about the swirl of investigations surrounding Christie and concern that he could be too damaged to be the Republican Party’s nominee in 2016.

He joked lightly about its long-term damage by saying he was not that worried about it.

“I hope none of you are worried about it, though I expect some of you are. But you’ll get over it,” he added to laughter. “It will be fine.”

Earlier on Friday, when he campaigned in California for that state’s GOP gubernatorial hopeful before flying off to Utah, Christie abruptly refused to answer a similar question from a reporter. And he also side-stepped difficult policy issues, such as immigration.

He did, however, take issue with Texas Governor Rick Perry, who had stunned people at San Francisco’s Commonwealth Club two days earlier when he declared that being gay was a lifestyle choice people could reject. Christie said he didn’t agree with that.

Perry’s remarks, incidentally, followed on the heels of the Texas Republican Party’s endorsing a platform that supports access to therapy to help gays change their sexual orientation.

How Christie will sell his position on homosexuality to Christian conservatives will be interesting to watch when he keynotes a meeting of conservative Christian leaders later this month. He is scheduled to headline Ralph Reed’s Faith and Freedom Coalition conference in Washington, DC, on June 20. Perry will also be addressing the group, as will the gaggle of GOP hopefuls including, Ryan, Paul, Texas Senator Ted Cruz, Louisiana Governor Bobby Jindal, Huckabee and former Pennsylvania Senator Rick Santorum.