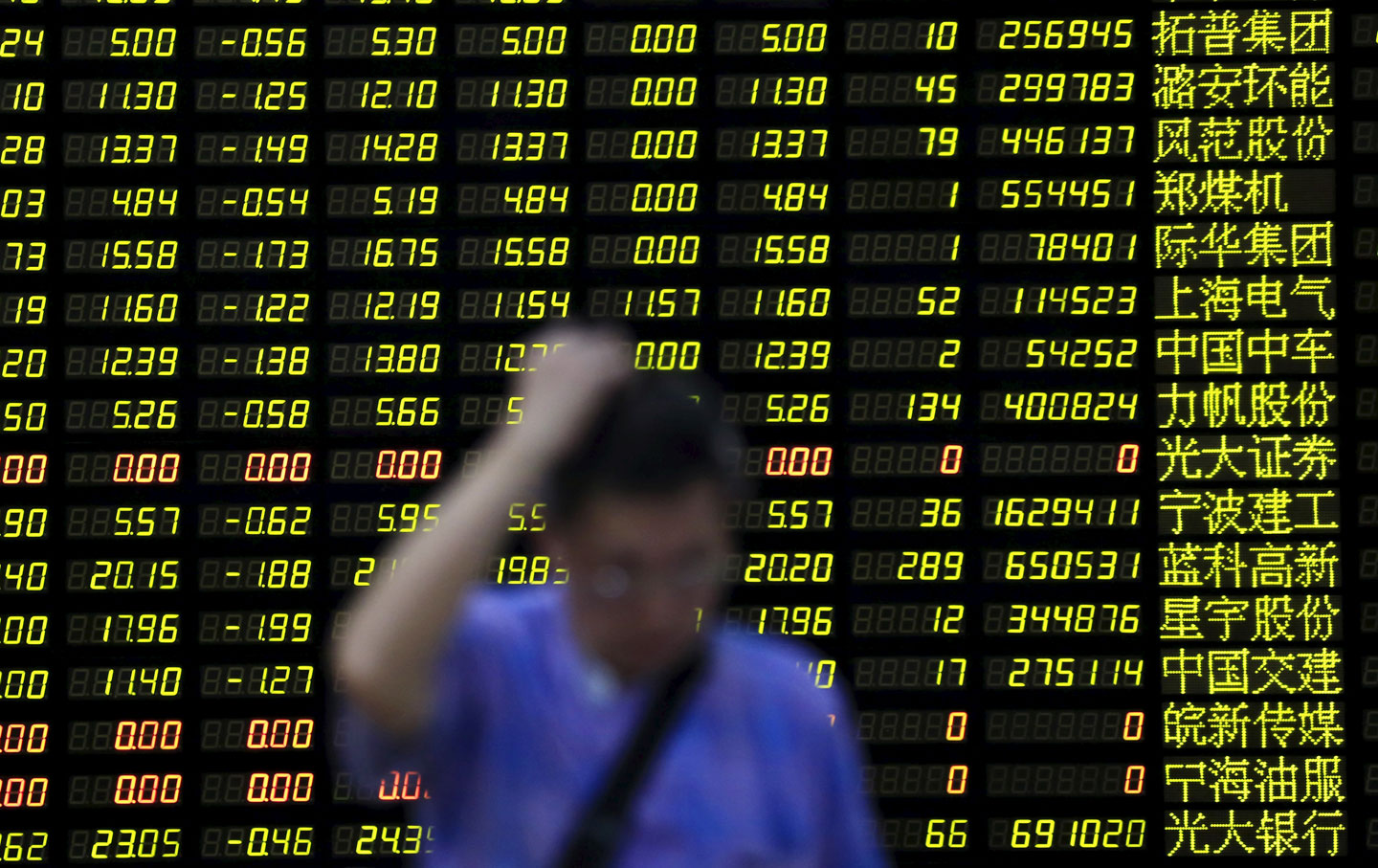 An investor stands in front of an electronic board showing falling stock information at a brokerage house in Shanghai, China, August 24, 2015. (Reuters/Aly Song)

It’s always amazing how the stock market pulls big surprises on those who should know better.

The momentous rise in share prices in the Shanghai stock exchange from mid-2014 to the middle of this year, when the composite index shot up by 150 percent, should have been a strong indication of what Alan Greenspan labeled “irrational exuberance”—the sign of an impending collapse of stock prices that are far above the real value of assets being traded.

But like Greenspan during the 2008 Wall Street crisis, neither Chinese investors, foreign investors, nor the Chinese government seemed prepared when the market cratered earlier this summer. The Shanghai composite index plunged by 40 percent in a few weeks’ time, triggering a global collapse of stock prices and forcing Beijing to intervene and buy up market shares—and, when that failed, prompting it to devalue the yuan.

Buoyed by a $585 billion stimulus following the US crash of 2008 and the European sovereign-debt crisis the following year, China had appeared to ride out the storm its Western trading partners unleashed upon themselves several years ago. It was only a matter of time, many analysts thought, before Beijing and the BRICS countries would replace the traditional economic hegemons as drivers of the world economy. This optimism proved short-lived.

Now, in fact, the Beijing stock-market collapse marks the deepening of a new stage in the contemporary crisis of global capitalism.

The Struggle Over Economic Strategy

When then-President Hu Jintao and Prime Minister Wen Jiabao launched China’s massive stimulus program—the biggest in the world in relation to the size of the economy—their aim went beyond providing temporary relief as the country’s main export markets in the United States and Europe faltered. The stimulus was intended to be the cutting edge of an ambitious drive to make domestic consumption, instead of exports, the center of gravity of the economy.

That plan made economic sense—not only because export markets were volatile, but also because over-investment in exports had left considerable underused capacity in the economy. It would place more purchasing power in the hands of the vast majority of peasants and workers, who had been disadvantaged by the priority given to export-oriented industries and profits. And politically, it would help China’s leadership fend off international complaints about the massive trade surpluses the country was running.

The problem was that the shift would also entail transforming the composition of winners and losers in the new China.

The country’s export-oriented growth has created a set of political and economic interests that have congealed into a powerful lobby over the last 30 years. This includes government planning bodies like the National Development Reform Commission and the Ministry of Finance, both of which had fathered the strategy of export-led industrialization; export-oriented state and private enterprises; local government and Communist Party bodies in the coastal provinces; and state-owned construction firms whose infrastructure projects undergird the export-led strategy.

One key interest of this lobby has been the undervaluation of the yuan to make Chinese exports competitive. Another has been keeping interest rates low—in fact, negative, when inflation is taken into account—so that people’s savings can be re-loaned at low rates to favored export-oriented firms and construction companies. Economists have termed this policy “financial repression.”

Alongside the small and medium entrepreneurs serving local markets, the losers include workers, peasants, and the general population in their roles as savers and consumers—in short, as the economist Hongying Wang put it, all those who have “suffered from the financial and public finance systems that have deprived them of their fair share of the national wealth.”

The export lobby didn’t just neutralize the plan to make domestic consumption the cutting edge of the economy. It was also able to hijack the massive stimulus program that had been intended to place money and resources in the hands of consumers. According to statistics Wang cited from Caijing Magazine, some 70 percent of the stimulus funds went to infrastructure, while only 8 percent went to social welfare expenditures like affordable housing, healthcare, and education.

This “financial repression” has had particularly pernicious consequences.

With little money to be earned from their bank deposits, a great number of the Chinese public gravitated toward the real-estate and property markets. This move was encouraged by the authorities, who were worried about the public’s discontent with the lack of profitable outlets for their savings. This encouragement included easing lending requirements at state banks to allow people to invest not only their savings but also borrowed cash.

Speculation in property was the investment of choice for many years. But as in the United States during the subprime property bubble, the market attracted too many investors, leading to a bust at the beginning of 2014. The price collapse led to thousands of unfinished skyscrapers, ghost cities, abandoned housing projects, and virtually deserted shopping complexes like the New South China Mall in Guangdong, which had been promoted as “Asia’s biggest mall.” This was like Thailand during the Asian financial crisis in 1998, but on a much, much bigger scale.

After the real estate debacle, investors fled to the stock market. With China’s stock-market value going above $10 trillion and the Shanghai index rocketing upward by 150 percent between mid-2014 and mid-2015, the market seemed both a safe and highly rewarding bet. Hundreds of thousands of small-time investors rushed into the casino, many betting with money borrowed from Chinese state banks.

When the Shanghai index reached its highest point in mid-June, a Bloomberg analyst observed that the previous year’s gain alone was “more than the $5 trillion size of Japan’s entire stock market. No other stock market has grown as much in dollar terms over a 12-month period.”

A steep, 40 percent plunge in the Shanghai index followed. Hundreds of thousands of Chinese investors posted huge losses and are now in debt. Many lost all their savings—a significant personal tragedy in a country with a poorly developed social security system.

Anger at the government’s failure to avoid the rout is building. Alert to the threat of stock-market losers taking to the streets, Beijing has tried to deflect the blame toward stock-market analysts and brokers. Authorities have made nearly 200 showcase arrests, even staging a televised “confession” by one business writer that he’d spread false rumors about the markets.

With the economic crisis deepening, the anger and resentment of those who were stripped bare of their savings are now joined to the fear of the unknown that’s stalking many in the middle class. Indeed, China’s modern middle class—which emerged only in the last quarter-century of rapid growth—has no experience with the grim prospects of a real economic downturn.

Added ingredients to this volatile brew are increasing mass protests by peasants and workers over a variety of grievances, including environmental pollution, land-grabbing by local authorities, and lack of workers’ rights. According to the China Labor Bulletin, strikes have become the “new normal” in China: There were some 1,378 workers’ strikes and protests in 2014—more than double the 2013 figure and triple 2012’s.

Over the last three decades, the Communist Party of China has replaced the delivery of socialism as the basis of its legitimacy with the delivery of rapid growth and a rich capitalist economy. Indeed, one of the key reasons the party has found it so hard to give up the export-oriented growth model is that it regards this strategy as a tried and tested mechanism of achieving high growth.

What matters now is how the current government of Xi Jinping will manage citizens’ expectations in a period of much slower growth, increasing joblessness, greater inequality, and escalating discontent. Will it continue to tread softly around the powerful set of interests that have dominated society for 30 years? Or will it muster the courage to lead the way to a new development paradigm, one based on domestic consumption and greater equity?