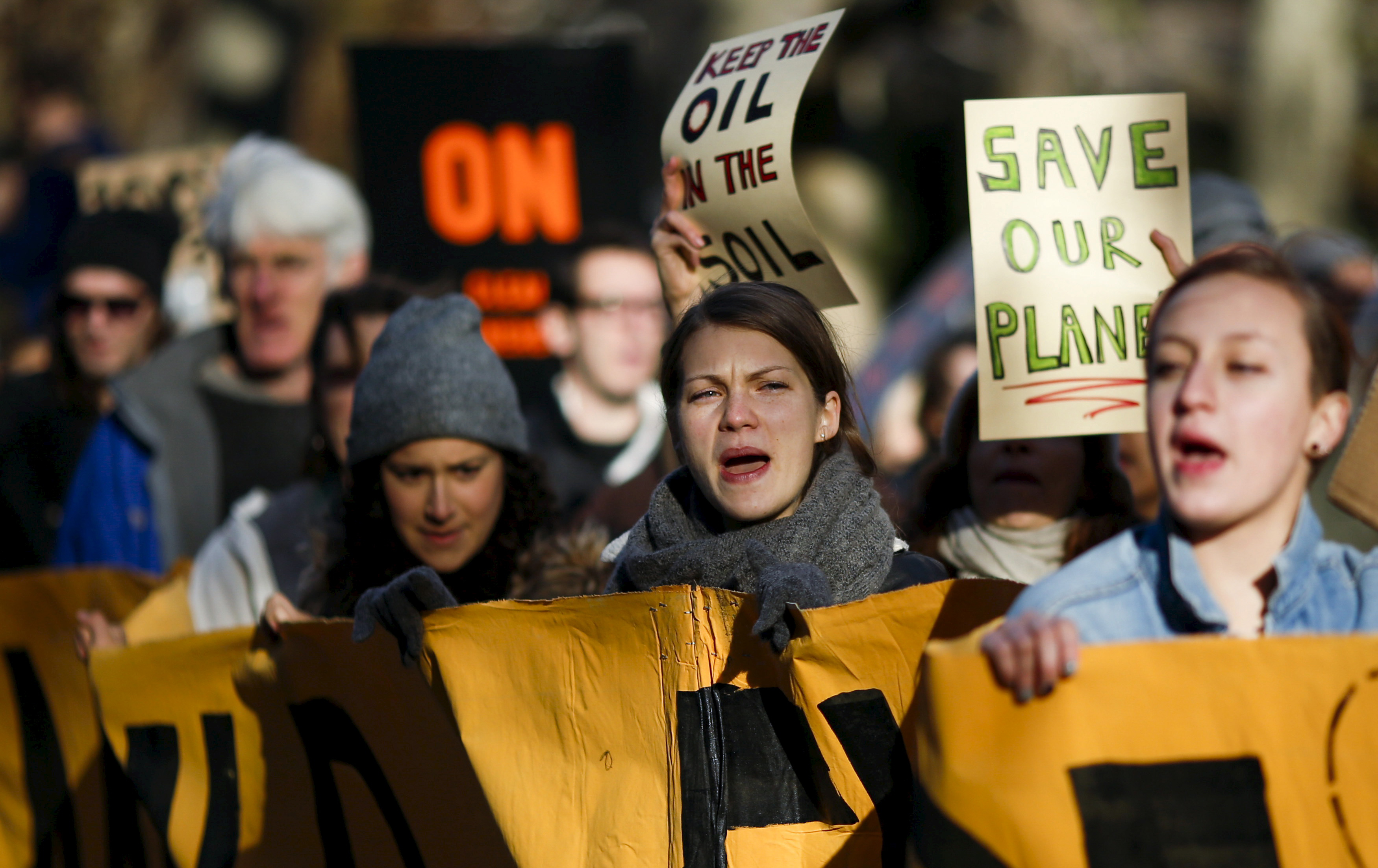 Several weeks ago, as climate-justice activists dispersed from Paris after the United Nations climate-change summit, a couple hundred people sat cheering in a Harlem church, its walls adorned with posters reading, “There can be no environmental justice without social justice.” Community leaders, directors of national environmental organizations, union members, a Hurricane Sandy survivor, the church’s pastor, the state attorney general—one at a time, each took the mic to rally the audience and attest to the urgent need for the evening’s gathering. Down in the pews, the crowd responded in agreement, applause interspersed with chants of “Sí se puede!”

After Paris, There Is Some Room for Hope

The Fate of the World Changed in Paris—but by How Much?

Just days earlier, in Paris, 195 countries had reached a climate deal that was at once historic in its broad, multinational scope and modest in its purely voluntary aspirations. In its wake, Hans Schellnhuber, one of the world’s most renowned climate scientists and a top adviser to Pope Francis, had declared, “It will be the job of civil society…to finish the job that national governments have begun here in Paris.”

Now, part of civil society had gathered together to meet that challenge. Its vehicle of choice was NY Renews, a new statewide campaign that will attempt to make tangible what Paris made aspirational. Standing on the church stage, New York Attorney General Eric Schneiderman received the loudest ovation of the night when he pledged his support for the initiative, exclaiming, “I’ve never seen an event like this.”

While NY Renews has been in the works for months, the timing of its launch placed the campaign’s demands in direct comparison to the agreement reached at the Paris summit on December 12. What could be the agreement’s best parts, such as naming 1.5 degrees Celsius as a goal for the eventual maximum temperature rise, amount to loose aims with no enforcement—and still fall short of what science demands. If every country kept its promises, the earth would still warm by 3.5 degrees Celsius, putting the temperature far above preindustrial levels.

“Think of it as a starting gun in a race,” said Aaron Mair, president of the Sierra Club, at the NY Renews launch event.

NY Renews aims to build off the Paris agreement and fill in its gaps. The campaign comes from a coalition of at least 45 organizations throughout New York State that helped organize last fall’s People’s Climate March. It targets the state legislature in Albany with numerous demands: to create clean-energy jobs, make the state’s climate commitments legally enforceable, ensure accountability for meeting those commitments, and establish a just energy policy. More specifically, the campaign calls for the state to use 100 percent clean energy by 2050, with benchmark goals in the interim and every state agency oriented to helping meet those goals.

As Eddie Bautista, the executive director of the New York City Environmental Justice Alliance, a member of the NY Renews coalition, explained before the event, “This will be an exciting and unprecedented moment for us to grapple with the policy at the state level, seeing as how we know how the Paris agreement is not going to protect the most vulnerable communities in the world.” In the wake of the agreement, he continued, “it becomes even more important for local action to drive how policy and how resiliency and adaptation get advanced.”

Governor Cuomo has already announced a goal of using 50 percent renewable energy by 2030 and committed to reducing greenhouse gas emissions by 40 percent by that same year. By 2050, he aims for emissions to be 80 percent below their 1990 level. The campaign hopes not only to push Cuomo further but also to codify the existing initiatives into laws, ensuring that future governors adhere to their mandates. “While there have been some good initiatives under this governor, we believe that our campaign pushes the state more broadly and more aggressively and more transparently in a direction where we need to go in terms of reducing our carbon footprint,” Bautista told The Nation.

With climate change a non-starter in Congress, statewide action is proving the best route to effective policy. “A lot of the reason why the US was even able to go to Paris and negotiate anything was because states have started to adopt more aggressive climate policy, and that’s no accident. That’s because people really built impressive political power in states,” explained May Boeve, the executive director of 350.org, which has a New York City affiliate that is active in the coalition.

Still, what’s most interesting about NY Renews may be the way it’s using this newfound political power. Whereas the Paris agreement failed to include a legally binding commitment from rich countries to appropriate sufficient funds to help developing nations mitigate the impact of climate change, NY Renews is making the inclusion of the most vulnerable central to its mission. In focusing on the needs of low-income communities, communities of color, and the communities that were most ravaged by Hurricane Sandy three years ago, it adds social, racial, and economic-justice components to its organizing—an acknowledgement that, although climate change affects everyone, it does not affect everyone equally.

“This is increasingly the direction the movement is moving,” Boeve observed. “We’re seeing across different movements and sectors the need for transformational change in the way decisions are made about the climate and the environment, about workers, about immigration, about healthcare, and increasingly recognizing that we need each other in order to be successful.”

With climate change a non-starter in Congress, statewide action is proving the best route to effective policy.

Beyond taking the Paris agreement as a jumping-off point, NY Renews is harnessing the momentum of the September 2014 People’s Climate March, where more than 300,000 people marched through Manhattan. Like this campaign, that event brought together people from a diversity of movements and organizations, highlighting the front-line communities that are already combating the impact of climate change. Now that coalition hopes to channel the march’s explosive energy into concrete policy change.

The reality of NY Renews remains to be seen—its own aims are still aspirational, after all. How it will channel the discussions and mobilizations around Paris into concrete support, how it will balance the needs of the variety of groups and movements it incorporates, and how it will transform its ideas into tangible political power—these are questions to which the answers can only be guessed right now. But these challenges are also what lend it the potential for success.

As Schneiderman said to the cheering crowd in that Harlem church on December 16, “NY Renews is how you keep the Climate March marching.”