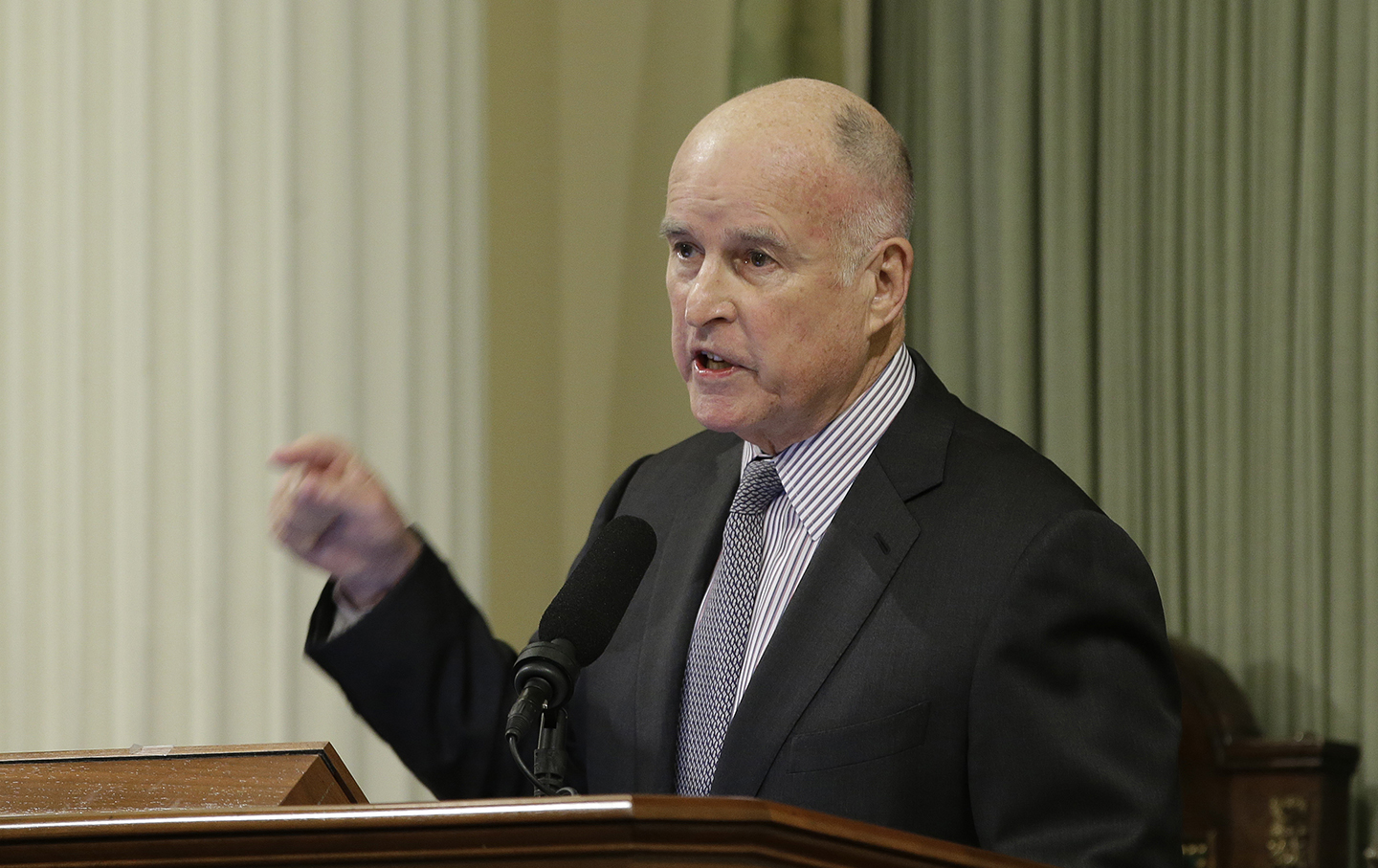 At 10 o’clock this morning, in the beautiful Assembly Chamber of the California legislature in Sacramento, Governor Jerry Brown quickly swore in the state’s new attorney general, Xavier Becerra.

A few weeks earlier, Brown had nominated the Los Angeles congressman because he believed that Becerra would fight Donald Trump’s agenda tooth and nail in the courts. The legislature held several confirmation hearings over the past few weeks in which it laid down a series of gauntlets to the incoming Trump administration. Becerra, time and again, expressed his willingness to sue the Feds to protect the well-being of Californians.

Now after the swearing in, in front of a packed chamber, the 78-year-old Brown laid out California’s challenges and opportunities in the Trump era. It was, he said in his half-hour speech, a critical moment, a period in history marked by “great uncertainty.”

For months, commentators have pointed to California’s outlier role as an increasingly liberal state in a country veering in a dangerously conservative direction. But while both the Senate and the Assembly leaders in this state have been outspoken in their criticism of Trump’s agenda, until now (with the exception of climate change), Governor Brown has been remarkably circumspect. In his statements outlining the upcoming budget last week, he talked of deficits and of the need to build rainy-day funds, and generally avoided big-picture questions such as what the state is planning to do in the event of the dismantling of the Affordable Care Act or other attacks on social infrastructure programs.

There’s been a Yoda-like quality to Brown these days. The governor has been speaking almost in aphorisms, making short, philosophical statements about our interconnectedness, our relationship to the planet, the dangers of hubris, and so on.

California, Brown averred, is “the Great Exception,” willing to carve its own path on a host of fundamental issues.

By contrast, in today’s State of the State speech, Brown went into specifics and on the offensive, his fury and contempt for Trumpism impossible to disguise. In a pugnacious, campaigning speech, his voice loud, his hands hammering the air for emphasis, the governor laid out a much more ambitious idea of what his state means and how California can act in the current political moment. California, he averred, is “the Great Exception,” a state economically intertwined with the rest of the United States but willing to carve its own path on a host of fundamental issues.

In many ways, Brown was laying down a challenge: that the California Dream would come to fill the emotional space in this century that in the 20th century was the purview of the American Dream.

“We will defend everybody…who had come here for a better life and had contributed to the well-being of our state.”

On immigration he committed the state to protecting its undocumented populations. “Let me be clear: we will defend everybody—every man, woman, and child—who had come here for a better life and had contributed to the well-being of our state.” The audience responded with a long standing ovation.

On climate change he argued, “whatever they do in Washington, they cannot change the facts…the science is clear.” He went on to slam the new administration for trying to “construct some alternate universe of non-facts that we find more pleasing.”

“California is not turning back. Not now, not ever.”

On ideas such as universal healthcare and equal treatment for all, Brown laid down an extraordinary challenge to the federal government. “I intend to join with other governors—and with you—to do everything we can to protect the healthcare of our people.” Departing from his prepared speech, Brown gave a strong defense of Planned Parenthood.

Finally, after quoting Woody Guthrie’s song “This Land Is Your Land,” Brown ended with a promise: “California is not turning back. Not now, not ever.”

If the Trump administration truly does slide not only toward extreme conservatism—rolling back most of the progressive political achievements of the past century—but, ultimately, into irrational rule, Brown’s speech showed that there were still some grownups in the American political room.

It was a speech notable not for cheap hyperbole but for its sense of determination. While some of California’s legislative leaders have in recent weeks spoken in panicked tones, Brown’s approach was simply one of getting a necessary job done.

On the same day that Trump announced the Keystone XL pipeline project would be started again, Brown delivered an alternative view of humanity’s relationship to the environment. “We cannot fall back and give in to the climate deniers. The science is clear. The danger is real.”

Brown’s call for other progressive states and governors to rally around this alternative vision, and his pledge to protect the interests of California’s people and environment in this new era, was a clear shot across the federal bow. Make no mistake, California will be at the forefront of resistance to all things Trump.