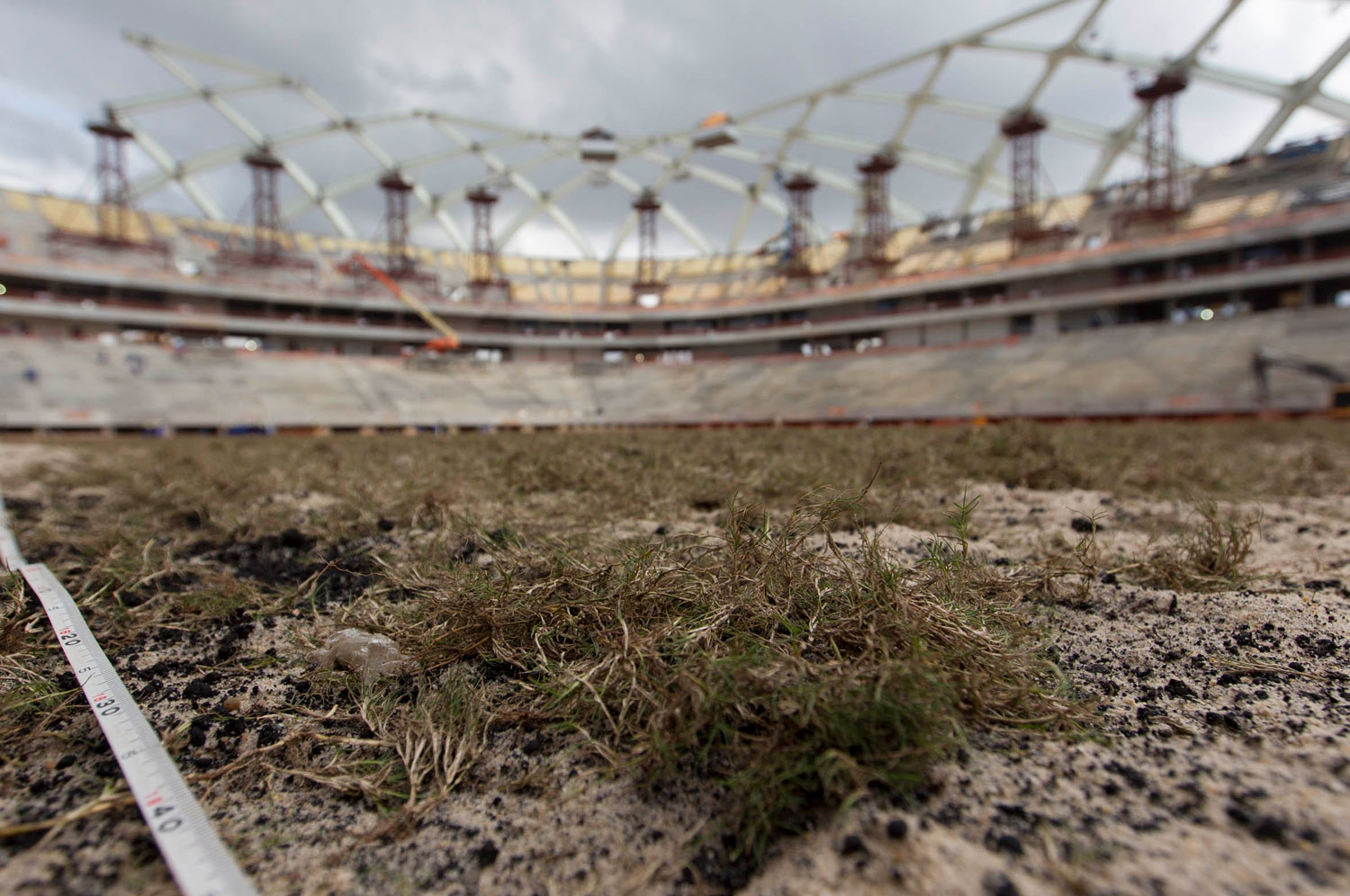 As Brazil prepares to host the 2014 World Cup and the 2016 Olympics, a topic that plagues the country is the impact hosting these games will have on the local environment and various ecosystems. Despite efforts by soccer’s ruling body, FIFA, to “greenwash” the games—by holding “green events” during the World Cup, putting out press releases about infrastructure construction with recycled materials and speaking rhapsodically about the ways in which the stadiums are designed to capture and recycle rainwater—the truth is not nearly so rank with patchouli oil.

No matter the country, the environmental footprint of these sporting mega-events looks like a stomping combat boot. The impact of air travel alone, with private planes crisscrossing Brazil, a country larger than the continental United States, will be staggering. According to FIFA’s own numbers, internal travel in Brazil during the World Cup will produce the equivalent of 2.72 million metric tons of greenhouse gases. That’s the equivalent of 560,000 passenger cars driving for one year.

Climate change, and advice from the Global North about how to treat the environment, is an extremely sensitive subject in Brazil. This is a country whose environmental concerns are of course global concerns, as it is home of the Amazon rainforest. Called the “lungs of the earth,” the Amazon rainforest creates 20 percent of the earth’s oxygen and 25 percent of its drinkable fresh water. It has also been razed and burned with shocking speed as Brazil’s economy has hummed, with double digit economic growth over much of the last decade.

It is, of course, not difficult to understand why the last thing people in Brasília want to hear is lectures about climate change from the Global North. The Amazon rainforest has been plundered by foreign adventurers as well as multinational corporations for decades. As the former President Lula once said, “What we cannot accept is that those who failed to take care of their own forests, who did not preserve what they had and deforested everything and are responsible for most of the gases poured into the air and for the greenhouse effect, they shouldn’t be sticking their noses into Brazil’s business and giving their two cents’ worth.” He certainly has a point, although it says something damning about our world that the logic of our system dictates Brazil’s sovereign right to destroy the “lungs of the world.”

With statements that make destroying rainforests sound like a bold act of Global South defiance, Lula also disregarded the powerful history of Brazil’s own environmental community, which was one of the crucial forces in the founding of his own Workers’ Party and has been fighting for decades to preserve the Amazon. As legendary Brazilian environmentalist Chico Mendes put it, “At first I thought I was fighting to save rubber trees; then I thought I was fighting to save the Amazon rainforest. Now I realize I am fighting for humanity.”

There’s no question the World Cup will put greater stress on Brazil’s critical ecosystem. This can be seen most clearly in the efforts to build a “FIFA-quality stadium” in the middle of the Amazon rainforest. Brazil will be spending $325 million, almost $40 million more than the original estimates, while uprooting acres of the most ecologically delicate region on the planet. The project has been a disaster since the first plant life was destroyed, before the cement was even poured. Building a new stadium doesn’t just ignore environmental concerns, it defies logic—the Amazon is already home to a stadium that draws far less than its capacity. And all of this to house a mere four World Cup matches.

Even those in Brazil who believe fiercely in the national autonomy of the rainforest region, without interference from international environmental bodies, are crying foul. Romário, the soccer star-turned-politician, called the project “absurd”. He said, “There will be a couple games there, and then what? Who will go? It is an absolute waste of time and money.” Since this particular white elephant seems to be uniting opposition of both the “wasteful spending” crowd and the “pro-breathing” crowd, the government is looking for options for the stadium after the World Cup that seem fiscally sound. One idea is to turn the entire stadium into a massive open-air prison—a use with a notoriously bloody echo in Latin American history, and not lost on those protesting the priorities of both FIFA and the Brazilian government. “Profits first, Brazil’s environment last,” is not a very peppy slogan but it would be more than fitting for the 2014 World Cup.

Read more of The Nation‘s special #MyClimateToo coverage:
Mark Hertsgaard: Why TheNation.com Today Is All About Climate
Christopher Hayes: The New Abolitionism
Naomi Klein: The Change Within: The Obstacles We Face Are Not Just External
Dani McClain: The ‘Environmentalists’ Who Scapegoat Immigrants and Women on Climate Change
Mychal Denzel Smith: Racial and Environmental Justice Are Two Sides of the Same Coin
Katrina vanden Heuvel: Earth Day’s Founding Father
Wen Stephenson: Let This Earth Day Be The Last
Katha Pollitt: Climate Change is the Tragedy of the Global Commons
Michelle Goldberg: Fighting Despair to Fight Climate Change
George Zornick: We’re the Fossil Fuel Industry’s Cheap Date
Dan Zegart: Want to Stop Climate Change? Take the Fossil Fuel Industry to Court
Jeremy Brecher: ‘Jobs vs. the Environment’: How to Counter the Divisive Big Lie
Jon Wiener: Elizabeth Kolbert on Species Extinction and Climate Change
Dave Zirin: Brazil’s World Cup Will Kick the Environment in the Teeth
Steven Hsieh: People of Color Are Already Getting Hit the Hardest by Climate Change
John Nichols: If Rick Weiland Can Say “No” to Keystone, So Can Barack Obama
Michelle Chen: Where Have All the Green Jobs Gone?
Peter Rothberg: Why I’m Not Totally Bummed Out This Earth Day
Leslie Savan: This Is My Brain on Paper Towels