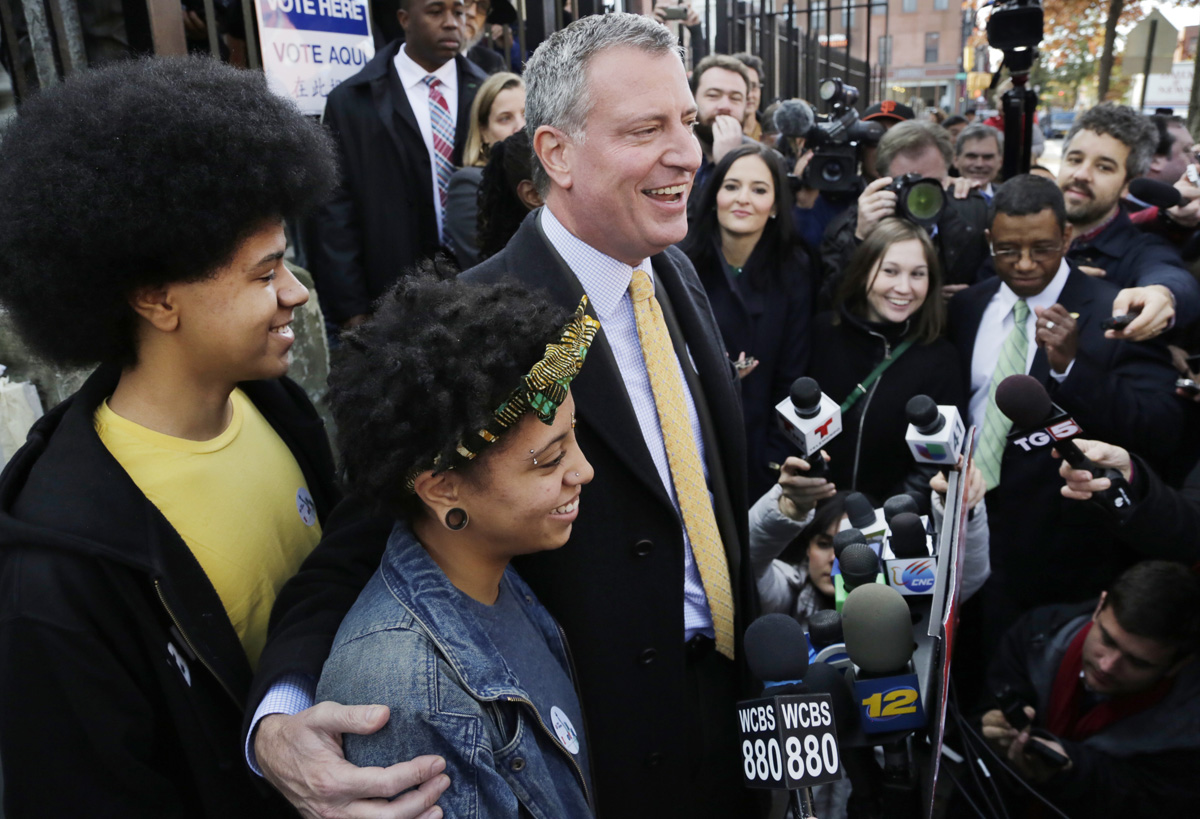 The twenty-year Republican reign over one of nation’s most liberal cities has officially come to an end: Bill de Blasio, a true progressive, will be the next mayor of New York City.

De Blasio, who ran on both the Democratic and the Working Families Party lines, is expected to beat former Giuliani deputy mayor Joe Lhota in a historic landslide. With 69 percent of the vote in, de Blasio is up by forty-eight points, and exit polls have him winning across the city and with voters “regardless of race, gender, age, education, religion or income.”

Whatever the final numbers are, de Blasio will clearly have the mandate needed to start the long, hard work of shifting power and resources from the 1 percent the last mayor favored to the middle-class and poor.

De Blasio and his team will be up against not only entrenched Wall Street interests but also Democratic Governor Andrew Cuomo. Cuomo has already signaled he’s opposed to one of de Blasio’s signature goals, funding pre-K and after-school programs for all New York kids by increasing taxes on those making $500,000 and up.

“Obviously the higher the percentage” of the vote, de Blasio said yesterday, “the more the work ahead is facilitated and strengthened.”

It’s too early, of course, to predict how the city will change under a de Blasio administration, but one thing at least has already changed. As a Nation editorial said, “de Blasio won big in the primary, and then ignored the conventional wisdom that after a primary, Democrats must pivot to the right. He describes himself as an ‘unapologetic progressive.’ ”

De Blasio—and, more important, the voters—also ignored the right’s fear-mongering “soft on crime” and “class warfare” attacks, attacks that had worked only too well for decades. But this year, they became more ludicrous with every repetition—hitting a nadir of self-parody yesterday with a New York Post cover that posed de Blasio’s face next to a hammer and sickle on a commie-red background. The confidence with which voters seemed to flick off these stale tropes indicates we’ve moved into a new era—at least in NYC.

There’s reason to hope that de Blasio’s win will help boost progressives elsewhere, but all politics is local. Indeed, right across the Hudson River in New Jersey, millionaire-protecting, teacher-and union-bashing Governor Chris Christie has won big (but not nearly de Blasio big) against another real progressive, Barbara Buono. It’s different there. Christie manipulated his electorate by calving off Cory Booker’s Senate race a couple weeks ago; some Democratic machine politicians actually endorsed Christie; and, especially after he hugged Barack Obama like a life preserver in the wake of Hurricane Sandy, voters came under the sway of his bluff personality and media that happily mistake him for a moderate.

We might not know for days what percentage of voters who pulled the lever for de Blasio did so under the Working Families Party line. But he and the two other candidates running for citywide office won as Working Families Democrats, and serve as evidence that this progressive victory is not merely the result of “Bloomberg fatigue” or a craze for the latest celebrified pol but rather a conscious vision of a politics that actively, and unashamedly, fights for economic and social justice.

UPDATE: The final numbers: de Blasio's margin of victory—a historic 49 points—is better than the polls predicted, and it's more than double Christie's winning edge of 21.5 points, which is a drop from the 30-plus points that many polls had him at.

The Nation editors endorsed de Blasio for mayor back in August.