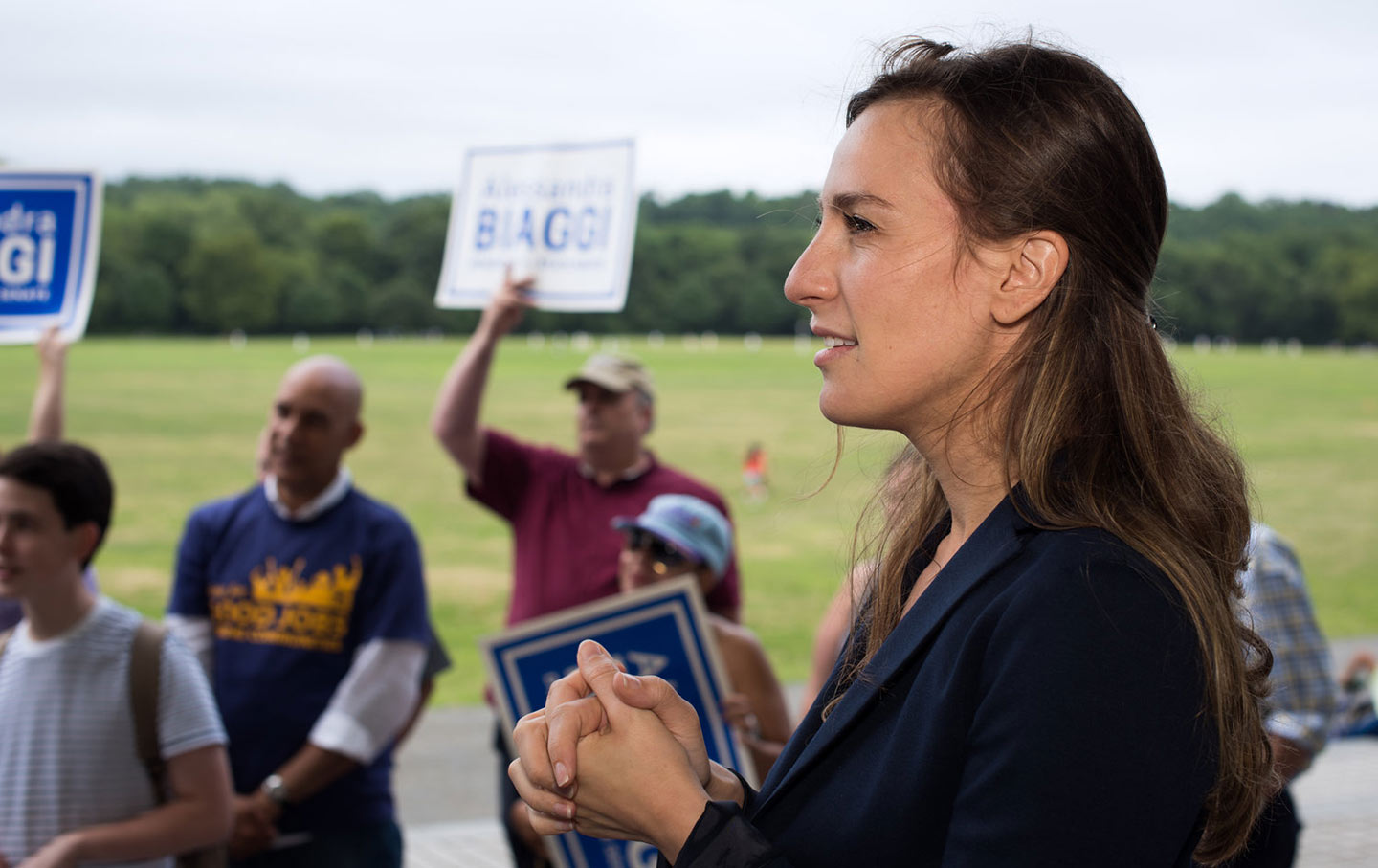 New York Governor Andrew Cuomo won a solid Democratic primary victory on Thursday, defeating insurgent challenger Cynthia Nixon by a 65-35 margin. Two other insurgents, anti-corruption campaigner Zephyr Teachout, who ran for attorney general, and New York City Councilman Jumaane Williams, who ran for lieutenant governor, went down to defeat as well. That was a downer for activists who had hoped to see primary upsets, like the June win by Alexandria Ocasio-Cortez, who rocked the politics with her Democratic primary defeat of the party’s fourth-ranking leader in the House.

Headlines that only paid attention to the top of the ballot portrayed the last big primary night of 2018 as a triumph for Cuomo and status-quo politics. But those headlines do not tell the whole story of what happened on Thursday night.

The most dramatic story is of a revolution in New York politics. And it is found in down-ballot results that will reshape the New York legislature as a dramatically more progressive force in state government.

Despite New York’s liberal reputation, progressive initiatives have been repeatedly thwarted in recent years not just by Cuomo’s caution and compromises but also by a working coalition of state Senate Republicans and Democratic legislators associated with the now-defunct “Independent Democratic Conference.” Even when Democrats won elections, and should have controlled legislative chambers, Republicans still called the shots on many issues.

The IDC became a symbol of the corrupt compromises, and corporate influence, that made “Albany” a watchword for everything that’s been disappointing about New York politics. As progressive reformers organized challenges to IDC-aligned senators in this years primaries, the group was disbanded. But that did not protect them from the wave of progressive energy that—while it may not have turned statewide contests—flipped the seats that mattered.

All eight state senators who had been associated with the IDC were challenged in Democratic primaries Thursday. Six of them lost to progressives. Those primary finishes, which are likely to be followed by November wins in overwhelmingly Democratic districts, promise a big shift in Albany. They will move the legislature and state government to the left.

The biggest victory for the challengers—and for the unions and grassroots activists with groups such as the Working Families Party and Citizen Action of New York that campaigned against the IDC-tied incumbents—was that of Alessandra Biaggi, who got a lot of street-level and social-media campaign help from Ocasio-Cortez for her challenge to a former IDC leader Jeffrey Klein. “We have now cut the head off the IDC snake,” the challenger announced at her raucous victory party.

Biaggi made the compromised politics of Albany politicians from both parties a central theme of her campaign. “There are five times as many Democrats as Republicans in District 34 and yet for seven years, my opponent led the Independent Democratic Conference (IDC), a group of 8 New York state senators who ran and were elected as Democrats, but then went to Albany to caucus and vote only with Republicans, handing control of the State Senate to the GOP. They did this out of self-interest,” she explained.

The successful challenger also made the connection between Democratic sell-outs and the real-life challenges facing working-class people in a district that stretched across the Bronx and Westchester. “This race impacts all New Yorkers, because a truly blue State Senate will mean the passage of important legislation that a majority of New Yorker’s have demanded. Closing the loopholes that empower predatory landlords. The Reproductive Health Act. The DREAM Act. Criminal justice reform. Early voting. The Climate Change and Community Protection Act. The list goes on,” she told primary voters.

Biaggi, who ran with the support of The New York Times, as well as Senator Kirsten Gillibrand, New York City Comptroller Scott Stringer, the Working Families Party, and Service Employees International Union local 32BJ, reminded voters that the election provided an opportunity to diversify the legislature and state politics. “The future of the Democratic party is inclusive, diverse and compassionate—it is not backroom deals and four-men in a room,” she said. “In New York politics, women are underrepresented—only 22 percent of New York State Senators are women, despite being over 50 percent of the population.”

That is certain to change when the new legislature takes shape after the November election. In addition to Biaggi, a 32-year-old attorney with deep roots in Democratic politics, the list of winning challengers to IDC-linked incumbents included Jessica Ramos, a 33-year-old labor activist who worked as an aide to New York Mayor Bill de Blasio. Ramos campaigned as “A REAL DEMOCRAT for NY State Senate.”

Biaggi and Ramos are all but certain to be joined in Albany by Julia Salazar, a 27-year-old Democratic Socialists of America activist, who announced during the campaign that she was “proud to be part of a grassroots, internationalist movement that values people over profit.” The first-time candidate upset State Senator Martin Dilan, who has represented the rapidly gentrifying neighborhoods of north Brooklyn for 16 years. “Tonight’s victory is not about me. Tonight’s victory is about New Yorkers coming together and choosing to fight against rising rents and homelessness in our communities,” declared Salazar, who focused on tenant-rights issues in her challenge to Dilan, who was not associated with the IDC but was a favorite of the city’s landlords.

Salazar’s energetic challenge to an entrenched incumbent drew the most attention among this year’s legislative contests, and the most negative media coverage in the final weeks of the primary season. City & State New York noted that “Salazar ran on a platform of universal rent control and single-payer health care, but she made national headlines when media reports challenged the working class, immigrant, Jewish image Salazar presented on the campaign trail. As more reports came out disputing aspects of Salazar’s past, Dilan’s ties to real estate also got attention, albeit without the sensational headlines.”

Salazar said that she had “inadvertently misrepresented” her past. But after it was revealed that she had not received a degree from Columbia University, Citizens Union (an influential New York good-government group) dropped its “preference” for her bid with an announcement that “Salazar recently admitted that the information she originally provided to Citizens Union about her academic credentials was not correct, so Citizens Union has decided to express no preference in this race.” Most progressive groups continued to support Salazar, however.

Stories about Salazar’s past, which featured prominently in the city’s tabloid dailies, appeared to have little impact on the ground in New York’s Senate District 18, where she was pulling 58 percent of the vote after campaigning “as an advocate, a tenant, a feminist, a democratic socialist, a union member, and a proud daughter of an immigrant family.”

Other progressive contenders—including Nixon and Williams, who came close to upsetting Cuomo’s running mate in the contest for lieutenant governor—ran with support from the New York City chapter of DSA. But Salazar campaigned as an active member of DSA’s largest local, which on Thursday night announced that “NYC-DSA has built a movement to send one of our own to Albany.”

The change in Albany will be dramatic as a new generation of insurgents and reformers arrives. Cuomo is likely to return with a more progressive bent—having been pushed left by the Nixon challenge. The Democratic nominee for attorney general, Tish James, has served for many years in New York City posts as a labor-aligned progressive. And the legislature will be populated by a state senators like Alessandra Biaggi, who claimed her victory as a signal that New Yorkers would no longer “tolerate Democrats who would be empowering Republicans.”