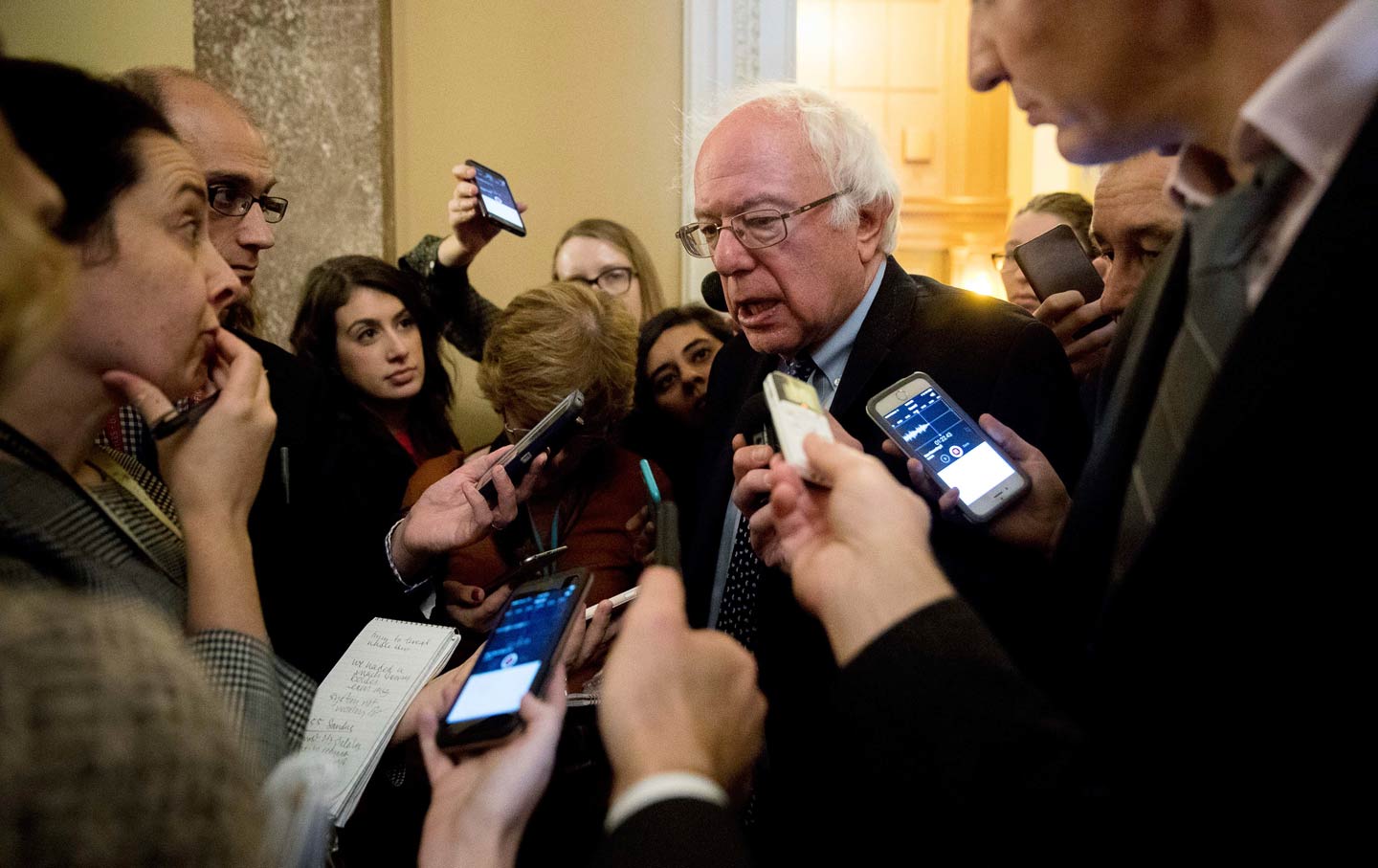 “What we have got to tell Mr. Trump and everybody else: We are not going silently into the night,” declared Bernie Sanders as he rallied outside the White House this week with opponents of the Dakota Access pipeline. The former presidential contender made a surprise appearance at the Tuesday-night protest to highlight concerns about climate change, telling the crowd that “The stakes are too high for the future of this planet. We are going to be smart. We’re going to educate. We’re going to organize. We’re going to bring tens of millions of people, moms and dads and their kids, together, together, to tell the fossil fuel industry that their short-term profits are not more important than the future of our planet.”

While the pipeline debate was his focus on Tuesday night, Sanders was taking up the cause of the working class on Wednesday night and joining nurses in defending Medicare and Medicaid on Thursday. Through it all, the senator from Vermont and his allies celebrated successful efforts to block a vote on the proposed Trans-Pacific Partnership trade deal — an issue that Sanders made a part to the 2016 race well before Trump announced his candidacy.

Many Democrats, and many progressives, are still recovering from the shock of Donald Trump’s election as a Republican president with a right-wing Republican Congress. But Sanders has come out fighting: appearing at rallies, delivering speeches, and offering strategies for taking on Trump and Trumpism.

Bernie Sanders: ‘We will not only oppose [Trump’s] economic policies, we will expose those hypocrisies as well.’

In a major speech Wednesday night at George Washington University, the senator recalled: “Toward the end of the campaign, [the president-elect] was actually using the term that many Democrats don’t use, and he was saying he was going to be the champion of the American working class. That’s what he said. Well, Mr. Trump, we have a list of everything that you said, and we are going to hold you to account.” If Trump keeps promises to invest in infrastructure, raise wages, regulate Wall Street, and reestablish Glass-Steagall protections, the Vermonter said Democrats could work with the incoming president. However, Sanders said, “If those promises turn out to be hollow…we will not only oppose his economic policies, we will expose those hypocrisies as well.”

With regard to the president-elect’s naming of white supremacist Stephen Bannon to serve as a top White House aide, Sanders gave no quarter. Calling on Trump to rescind his selection of Bannon, Sanders said, “The president of the United States should not have a racist at his side.”

“We will not be involved in the expansion of bigotry, racism, sexism,” announced Sanders, to cheers from the audience. “Mr. Trump, we are not going backwards in terms of bigotry. We are going forward in creating a nondiscriminatory society.”

Sanders has always showed up for protests, joined picket lines, and delivered policy-rich speeches. But now, as a former presidential candidate with dramatically greater popular recognition and support, the Vermonter is stepping up his activism. And top Democrats, who did not always offer the warmest welcome to the independent senator, are suddenly embracing him. The Senate Democratic Caucus named Sanders to its leadership team—with a charge to lead outreach efforts—on the same day that Massachusetts Senator Elizabeth Warren, another progressive, was tapped to serve as vice chair of the group.

If “outreach” means joining with activists to push back against Trumpism, then Sanders was on the job immediately. In addition to the Tuesday-night rally with Native American campaigners and environmentalists, Sanders was the featured speaker at Thursday’s “Day of Action” rally on Capitol Hill. Organized by National Nurses United (NNU) and dozens of other labor, environmental, and consumer groups as a broad-based postelection rally against Trump, the event expected to focus on the social- and economic-justice agenda that was central to the senator’s presidential campaign. It also highlighted the anti-TPP activism that will continue to be central to work of labor, environmental and human rights groups.

The rally was organized not merely to raise legislative issues but also to raise concerns about the tenor of Trump’s campaign, and the signal that was sent when the president-elect announced the hiring of Bannon as his White House strategist.

‘Listen to working families, not the political establishment or the billionaire class.’ —Bernie Sanders

“Nurses know that public health begins with personal safety, that is endangered by threats to your family or exposure to hate crimes,” said NNU union co-president Jean Ross. “It is incumbent on all of us to speak out today.”

Sanders, who has worked closely with the nurses union on behalf of single-payer “Medicare for All” health-care reform, drug-price initiatives, and a “Robin Hood” tax on billionaires, was endorsed by NNU in a presidential run that proposed a political revolution. And the Thursday’s rally featured “Bernie 2020” signs, while some in the crowd wore “Hindsight in 2020” t-shirts.

Sanders firmly deflected talk of another presidential run, urging a focus on immediate struggles. One of those struggles involves the race for leadership of the Democratic National Committee. The senator says: “We need major, major reforms to the Democratic Party.”

To that end, Sanders continues to highlight and encourage the candidacy of Minnesota Congressman Keith Ellison for Democratic National Committee chair. In his argument for Ellison, Sanders announced, “We need a Democratic National Committee led by a progressive who understands the dire need to listen to working families, not the political establishment or the billionaire class.”