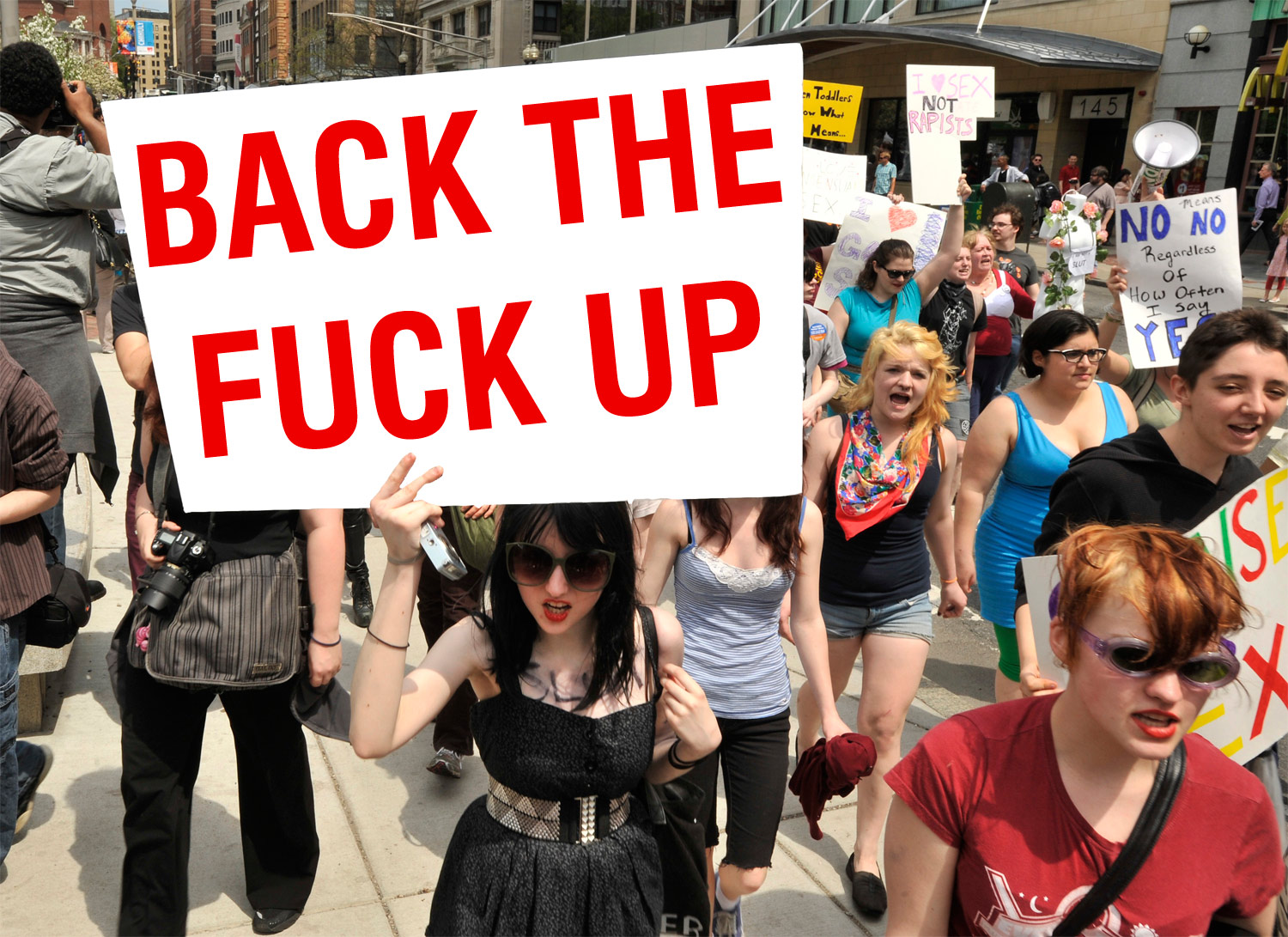 Feminists are constantly on the defensive. Whether it’s fighting back against sexist media depictions of women, working to hold ground on reproductive rights or arguing that rape is an actual thing that really happens—feminism’s fights are largely reactionary. In the wake of the Supreme Court fight over buffer zones, it occurs to me that we need something a bit more proactive to protect women and their rights. So I’d like to suggest that we implement a national call—a feminist addendum in the social contract—for people to Back The Fuck Up.

When a person is entering an abortion clinic, for whatever reason, protesters need to Back The Fuck Up. Because even if the media does paint anti-choice protesters as “cheery grandmothers,” the people who work at clinics every day know that these people aren’t harmless—they’re harassers. So move over, “grandma.” I need to get in that building.

When we’re walking down the street minding our own business and a man implores us to talk to him or makes a comment about our bodies, a Back The Fuck Up policy would ensure women some much-needed space. Sorry, dudes, I don’t make the rules. Perhaps you can tell that guy over there how much better he would look if he just smiled?

A Back The Fuck Up law would be especially helpful when it comes to male politicians trying to legislate women’s bodies. Have a comment about how rape can’t result in pregnancy? Think that women should be forced to view ultrasounds and listen to medically inaccurate information before they can access abortion? Sorry, guys, Back The Fuck Up. And take a biology class while you’re at it.

For the guys out there who aren’t sure if a woman wants to have sex—or thinks that wearing a skirt, having a drink or going back to their room constitutes consent—just Back The Fuck Up. Take two steps back and listen for enthusiastic consent. If you’re not hearing it, Back The Fuck Up even more.

Internet sexists who try to silence women with sexual threats and/or racial harassment: seriously, Back The Fuck Up.

It’s too bad that we can’t have “Back The Fuck Up” grace the law books anytime soon. But the ethos is one we can all embrace—the idea that women have a right to live their lives free of discrimination and without encroachment on their rights and physical space. It’s really not that difficult to understand, nor is it too much to ask. So until we can walk through the world unencumbered by misogyny, BTFU.