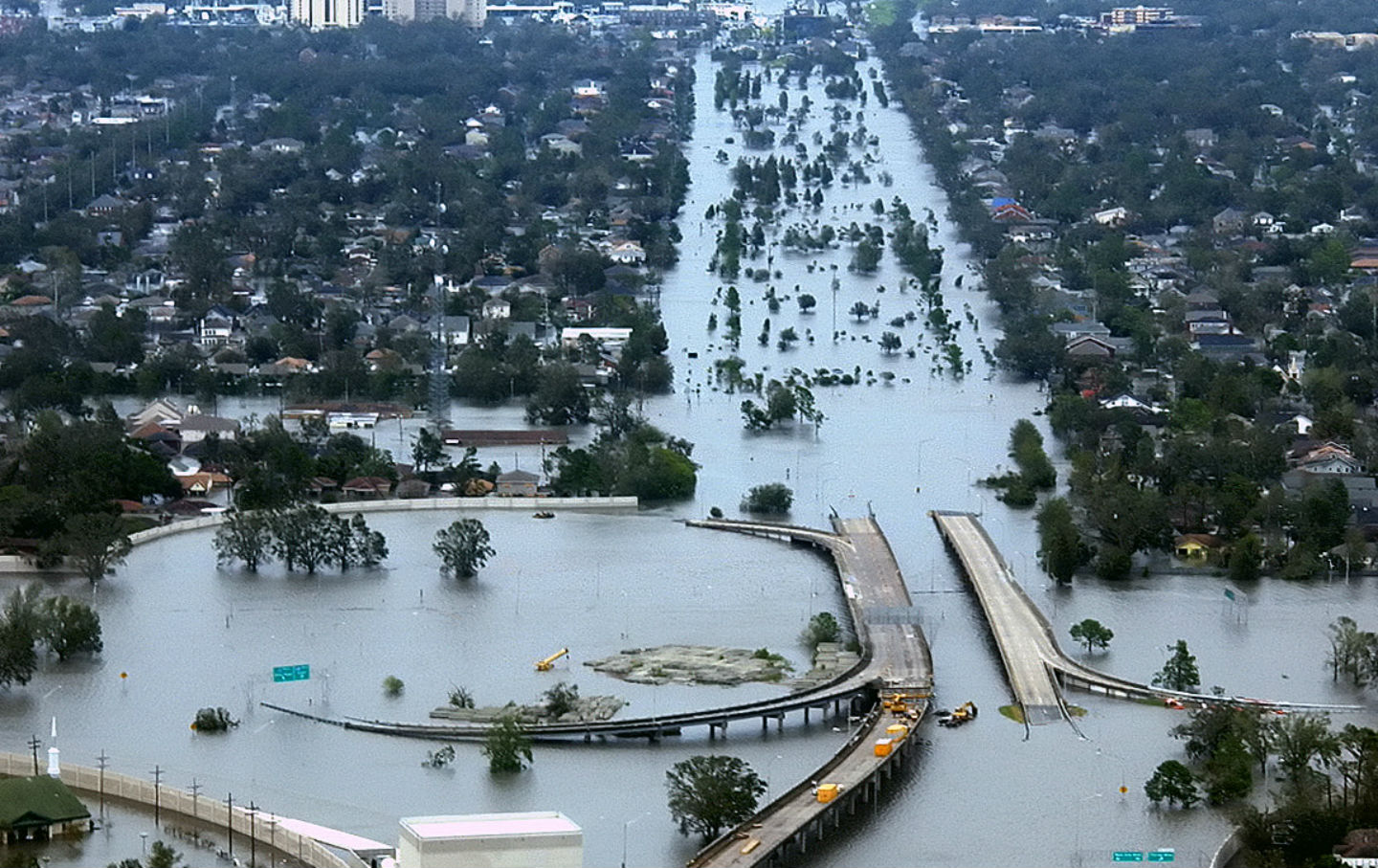 A flooded interchange connecting northwest New Orleans and Metairie. Much of the damage done during Hurricane Katrina happened as the storm breached the levees and was not from the actual hurricane, which had downgraded to a Category Three when it hit Louisiana. (US Coast Guard)

On this day ten years Hurricane Katrina slammed into the Gulf Coast, hitting New Orleans, much of which is below sea level, almost directly. Roughly 80 percent of the city’s residents were able to obey a mandatory evacuation order, but the poorest and least equipped residents were unable to leave and were left with nowhere to go. In an editorial following the disaster, The Nation tried to connect the dots.

The incompetence revealed by the response to the hurricane is deep-rooted, and can be traced to the twenty-five-year project, begun in the Reagan era, of discrediting government, “starving the beast” of resources and exalting private markets and faith-based charities. Tax cuts for the wealthy and Congressional corruption have drained government of the imagination and resources to address human needs. Katrina has brutally exposed Americans to the costs of this folly….

While most of the affluent of New Orleans left by car or plane, the poor had no way out. They were told to go to the Superdome and convention center, where—unbelievably—there were inadequate supplies of food and water, no electricity, befouled sanitation facilities and no police protection. When it came time to rescue and relocate the displaced, the Bush Administration placed the onus on state and local officials and called on citizens to give to charities. But faith-based disaster relief is no substitute for an effective, organized, rapid government response….

The disaster requires a thorough investigation into what went wrong, by an independent commission with subpoena power. It should also lead now-furious Americans to re-examine a generation of backward priorities. The debate about the role of government in the service of public good has been reopened. The hurricane revealed not only the desperate poverty of the region’s African-American population but also the poverty of our federal policies. For too long our leaders have abandoned our cities, our poor, our public infrastructure. We need a government dedicated to serving the unemployed, the ill fed and the ill housed. It’s time to end the dismantling and begin the rebuilding.