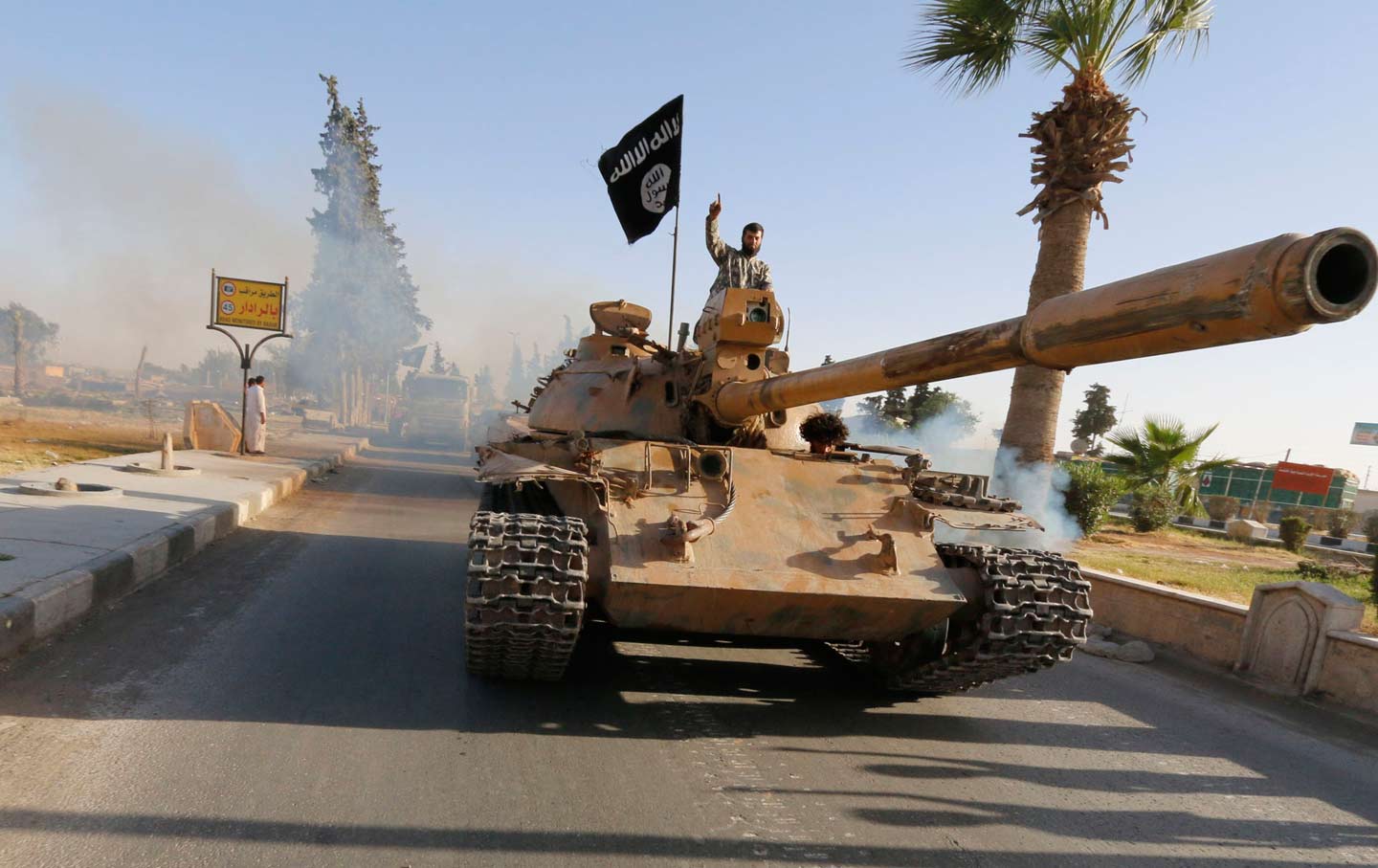 ISIS fighters in Syria take part in a military parade along the streets of northern Raqqa. (Reuters / Stringer)

Fourteen years ago, immediately after the Al Qaeda terror attacks in the United States on September 11, the French daily Le Monde published a headline that perfectly expressed the sentiments of grief, shock, and solidarity that so many around the world felt at the time: Nous sommes tous Américains  (We are all Americans). In the wake of the Islamic State’s terror attacks on Paris, many of those same feelings flooded the world media, this time for the City of Light (a wave soon followed by rueful acknowledgment that earlier ISIS atrocities, from Beirut to Baghdad and Aden to Ankara, had elicited far less sympathy in the Global North). Adding to the shock this time was the horrifying realization that these terrorists, in targeting random civilians at a sports event, concert, cafes, and restaurants, were attacking not simply a city or a country but the very idea of pleasure, diversity, conviviality—an assault on so much of what makes life worth living.

But just as in the United States in the weeks after 9/11, all too many politicians and pundits on both sides of the Atlantic cried out for war and vengeance, demanded draconian new policing and surveillance powers, and insisted on an end to accepting more refugees. French President François Hollande, vowing that “France will be pitiless against the barbarians” of ISIS, went so far as to invoke Article 42.7 of the European Union treaty, which stipulates that all EU nations are obliged to come to the aid of a fellow member who is the “victim of armed aggression.”

Republicans and other critics in the United States used the tragedy to attack the Obama administration’s Syria policy, without offering coherent alternatives. Perhaps most despicable was the backlash against those fleeing the civil war, with more than two dozen Republican governors announcing that their states would no longer accept Syrian refugees. Several GOP presidential candidates, echoing the neoconservative pundits, seemed to be in a competition to see who could be the most Islamophobic. There’s plenty to criticize regarding President Obama’s Syria policy, but in his press conference in Turkey, the president was scathing, and admirable, on this point: “When I hear folks say that, well, maybe we should just admit the Christians but not the Muslims; when I hear political leaders suggesting that there would be a religious test for which a person who’s fleeing from a war-torn country is admitted…that’s shameful. That’s not American…. We don’t have religious tests to our compassion.”

The Islamophobia is racist, of course, but it also plays right into the hands of ISIS, as does the war fever. The terror group has been quite clear that its strategy is to eliminate what it calls the “grayzone” where Muslims and non-Muslims live in harmony. It aims to provoke Western governments into clamping down on their own Muslim populations, the better to drive them into ISIS’s arms. In its magazine Dabiq, ISIS applauded George W. Bush’s post-9/11 language: “Bush spoke the truth when he said, ‘Either you are with us or you are with the terrorists.’ I.e. either you are with the crusade or you are with Islam.” Les extrêmes se touchent.

Obama also sharply rebutted demands that he militarily solve what has become the world’s most intractable conflict, pointing out the immense complications of imposing a no-fly zone on Syria, and observing that while a US invasion could probably rout ISIS from its strongholds temporarily, without a local population “pushing back against ideological extremes,” the terrorists would resurface as soon as American forces left. Years of bitter experience demonstrate that US military intervention in the Middle East has done more to provoke extremism than to stanch it. It was the US invasion of Iraq, after all, that led directly to the birth of ISIS. The terrorists know this, which is why they’re doing everything they can to drive the West into deeper military engagement.

Regarding another crucial driver of not only the Syrian civil war but Islamist extremism throughout the region, the president’s policy—like those of previous administrations and most Western governments, including France—has been disastrous. This would be Washington’s close, decades-long alliance with the Wahhabi regime in Saudi Arabia. As Laila Lalami points out, no force has done more to fund Islamist extremism in the Muslim world than Saudi Arabia. These so-called allies of ours, along with other Gulf kingdoms and the seemingly more moderate Islamist government of Turkey, have showered jihadi groups among the Syrian rebels with arms and money, to the point that they are now the only significant armed forces opposing the Assad regime.

There is one ray of light amid the carnage: The attacks have given urgency to international negotiations to end the war in Syria. Russian and US leaders seem to have finally realized that unless they cooperate diplomatically to resolve the conflict, it could destroy the entire region—and continue to spread beyond it. Before the latest round of talks in Vienna, Washington sensibly abandoned its insistence on excluding Iran, as well as its demand that Assad’s immediate departure be a condition of the talks. There are immense hurdles to overcome, but at least both countries now know that as long as this conflict lasts, ISIS will only grow stronger.