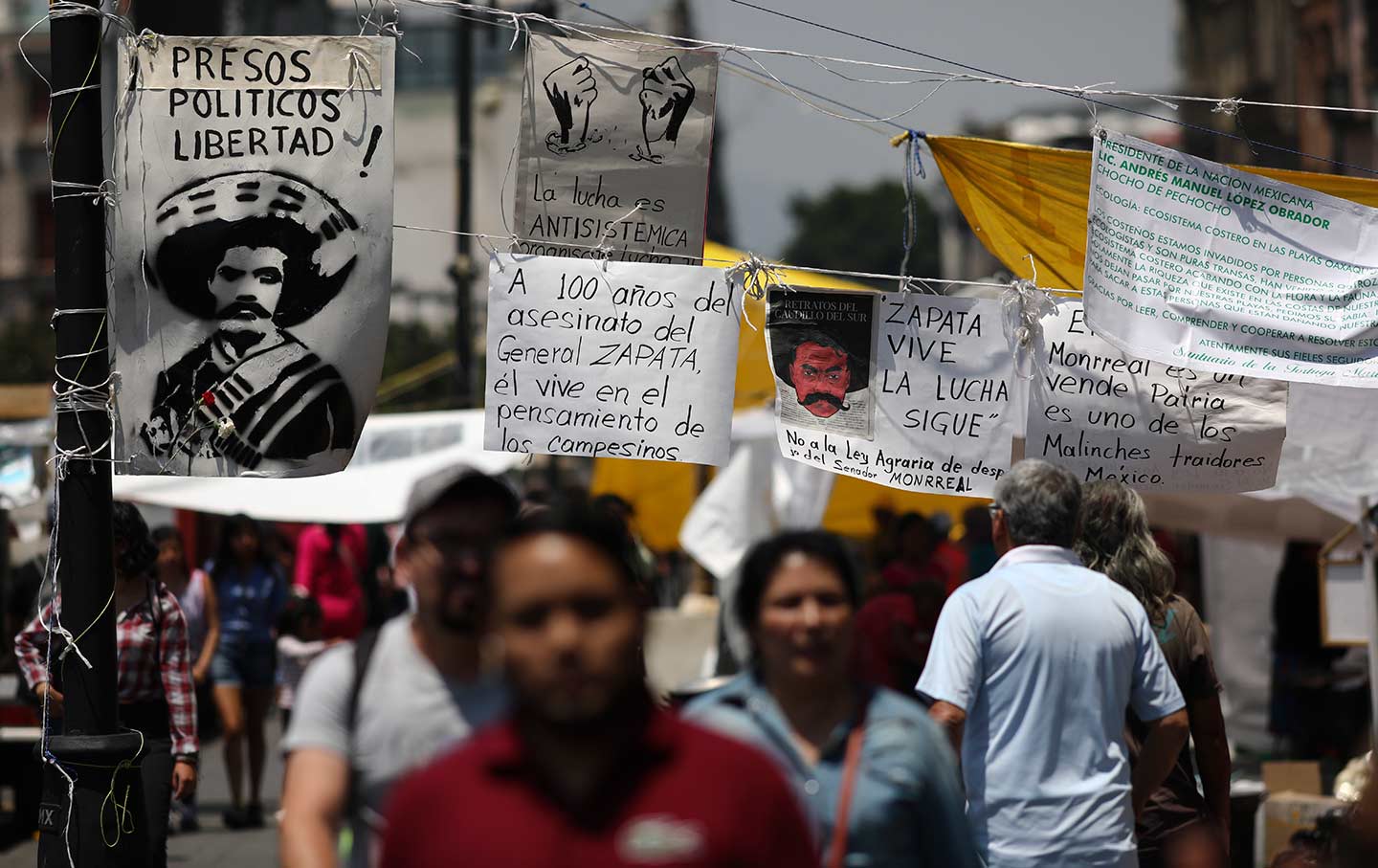 Images of Mexican revolutionary leader Emiliano Zapata hang as part of a demonstration outside the National Palace in Mexico City on April 10, 2019. (AP Photo / Eduardo Verdugo)

On February 17, some 300 people from the Mexican state of Guerrero set up camp outside of Mexico City’s National Palace to pressure the government to address their forced displacement by drug gangs from their homes in the Sierra Madre. Two weeks earlier, president Andrés Manuel López Obrador had announced that Mexico’s war against narcotrafficking was over. “There is no war. We want peace, we’re going to get peace,” he’d told reporters in his daily morning press conference. For communities like the displaced from Guerrero, Mexico’s war on drugs is alive and well. The hand-lettered posters around their tent encampment detailed their complaints: “In Guerrero there is no guarantee of anything. It’s a narco state.”

Since then-President Felipe Calderon first announced Mexico’s war against drugs in 2006, military deployment in states with a strong cartel presence has dramatically altered the life of Mexicans. In Guerrero, home to many of the country’s opium fields, hundreds of people have been displaced as a result of turf wars and corruption, as gangs and traffickers have colluded with security forces and government officials.

Manuel Olivares, the director of a Mexican human-rights center that has been providing support to the displaced people from Guerrero, says the situation is the result of the drug war’s deployment of the military in the streets: over 600,000 troops have been deployed across Mexico to fight narcos. In some areas, Olivares says, state police and the army actively collaborate with gangs to manage gang territory.

“When the military was deployed, they hit some cartels in some states very hard,” he explains. As a result, cartels fragmented into smaller gangs who began to fight increasingly bloody turf wars, resulting in entire communities being forced from their homes at gunpoint; over 200,000 people have been killed in the process, and around 40,000 people have been forcibly disappeared. 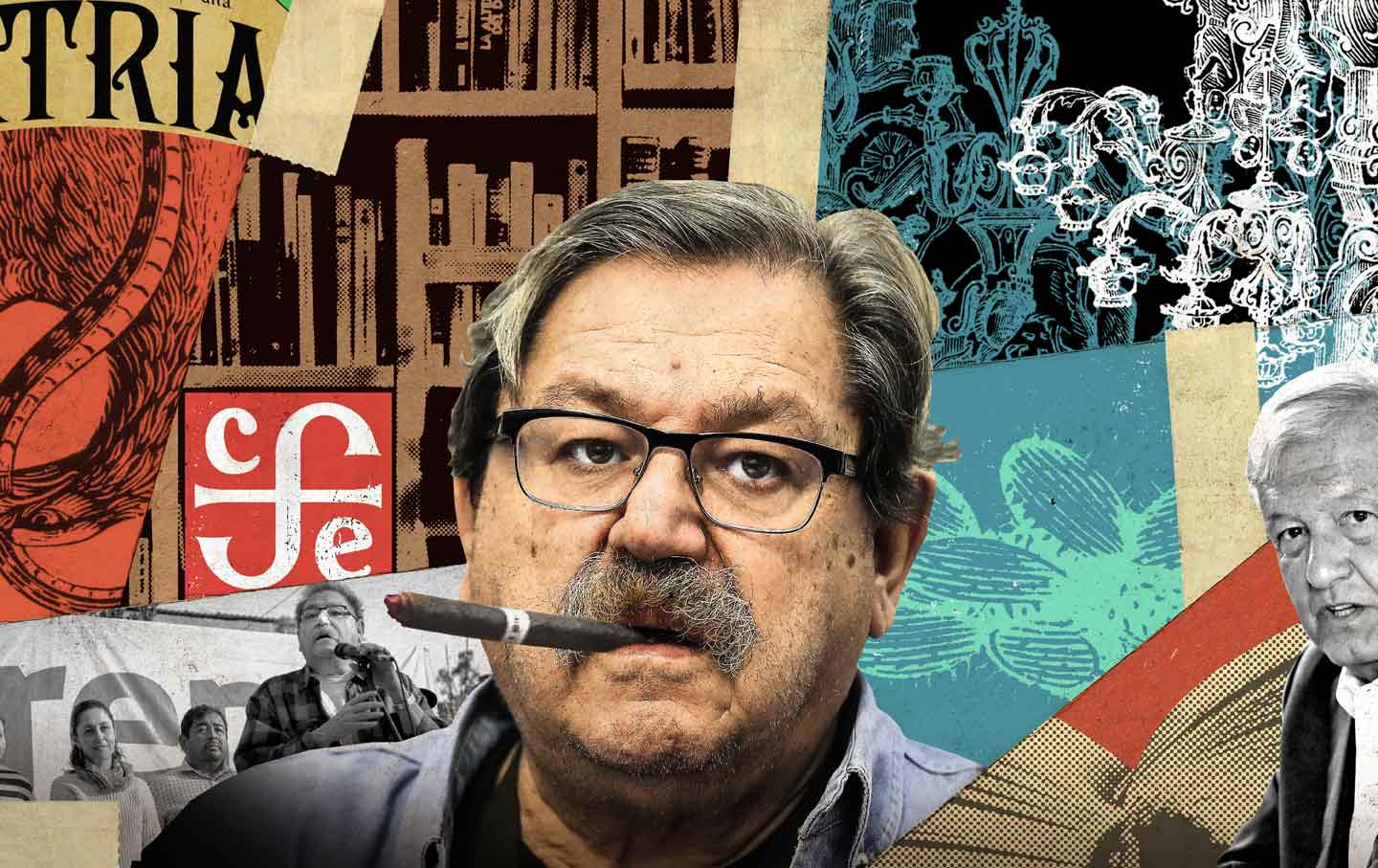 During his presidential campaign, López Obrador insisted he’d take a new approach to the drug war. Instead of the militarization that characterized his predecessors, López Obrador has largely advocated for peace building and transitional justice, even speaking about the possibility of amnesty for narcotraffickers during his presidential campaign. In November, López Obrador presented his National Peace and Security Plan that plans to “reformulate the combat of drugs” through changing structures of penalization of drugs, address impunity of state actors, reorient national security strategies and seek justice for victims of drug war-related violence. In presenting the plan, the president discussed the need to “begin a peace process with organized crime organizations and adopt models of transitional justice that guarantee the rights of victims.”

Such a change in approach could mean moving from the prohibition and criminalization that has defined drug policy worldwide since the 1960s. Zara Snapp, the founder of drug research and advocacy organization Instituto RIA, sees López Obrador’s declaration as primarily a shift in strategy. “It means they aren’t going after the big capos anymore,” she explains. But while the war against the narcotraffickers has ended, she argues, “the government also needs to end the war against the people.” That includes everyone from families of disappeared people, to people displaced by turf wars, to drug users and small-scale producers.

López Obrador has also announced a new Plan for Search of Disappeared People, with an allocation of $2 million to investigate the cases of the 40,000-some disappearances since the start of the drug war. Amaya Ordorika, who advocates for sensible drug policy and the end of the drug war with the nonprofit group ReverdeSer Colectivo, says the new plan could be a step towards repairing some of the harm of the drug war. Historically, families of disappeared people have faced, at best, a lack of capacity and institutional will in investigating their cases, and at worst, corruption and complicity of authorities in forced disappearance.

Ordorika echoes that a new drug strategy ought to move from criminalizing the substances and illegal markets themselves, to centering the communities affected by the war on drugs. “We talk about narcotrafficking and everyone imagines Chapo Guzman or the big cartels,” she says, “but if we unpack the concept of narcotrafficking, a ton of people at different levels in the chain participate in different ways.”

At the lowest end of the supply chain are small-scale farmers who cultivate poppy and marijuana, women who transport small amounts of drugs and small-scale sellers who tend to be people with few economic alternatives. “These populations are over-criminalized,” Ordorika says, as organized crime structures treat them as replaceable, and they lack the protection of powerful drug capos.

There’s another side to these developments: while López Obrador has spoken in favor of demilitarization, NGOs and activists have criticized his implementation of a new National Guard because of its potential to heighten military presence. The original plan called for the body to comprise active members of the military, the federal police and military and naval police. A report from the NGO Mexican Commission for Defense and Promotion of Human Rights (CMDPDH) argues that the National Guard gives further license to the human rights violations that have occurred as a result of the drug war, and that it is contrary to the “transitional justice process” that López Obrador has mentioned with respect to the drug war.

The Senate eventually approved the measure under the condition that it remain under civil, rather than military, control, but López Obrador announced in April that the head of the National Guard would be a military general. Catalina Perez Correa, a researcher at the Drug Policy Program at Mexico City’s Center for Economic Research and Education (CIDE), says that the National Guard has the potential to go either way. “It depends how it is implemented,” she says. “It could be an opportunity to reduce the damage that has been caused by militarization, unless AMLO uses it as an excuse to further militarize the country.”

Perez Correa says it is crucial for the administration to take steps toward regulating drug markets. López Obrador has insinuated in the past that he make take steps towards legalization of cannabis, and Perez Correa emphasizes that violence reduction will depend on how cannabis is eventually regulated in Mexico. “If it is a strategy that favors big capital, it’s very possible that the violence will continue, with farmers obligated to plant drugs becoming exploited by big cannabis.”

Snapp also argues that the end of the drug war should necessarily involve a de-stigmatization of drug use in general. “We have to stop creating conditions where people who use drugs can be extorted by authorities and where resources from drug markets get to organized crime.” Regulation, she says, should be a tool to rebuilt the social fabric in communities torn apart by the drug war. “We can use regulation to repair the harm that prohibition has caused,” she says. “For us, it wouldn’t be a good regulation if they don’t involve those who are today involved in the illegal market.”

This means changing the conversation around drug addiction in general—a step that López Obrador may not be willing to take.

In mid-March, he proposed giving the church its own television and radio channels in order to transmit moral values to combat drug use. “It’s not enough to say, my policies changed,” says Ordorika. “For decades, there was a public discourse, and you have to reverse the effects of that by implementing a new public discourse of repairing damages and social reconciliation of people who’ve been marginalized, stigmatized, criminalized.” For Ordorika, that new discourse should involve a framework focused on harm reduction, through initiatives like supervised injection sites and comprehensive drug education behind the just-say-no model.

Mexico wouldn’t be the first country to take an approach to drugs focused on harm-reduction and regulation rather than the prohibition and criminalization that has defined international drug policy since the 1960s. In doing so, it would follow precedents set by Canada and Uruguay, who have fully legalized marijuana in spite of international drug treaties that prohibit countries from fully legalizing recreational drug use. “Mexico now would be the third or fourth country [to change its approach to drugs], but Mexico would be the first country where we’ve had this level of devastating consequences from prohibition.” Snapp says, adding, “I think Mexico has all the moral authority to talk about a paradigm shift.”

Whatever its eventual details, a new drug policy for Mexico will also inevitably have severe consequences for its relationship with the United States. Washington has invested up to $3 billion in Mexico’s drug war through the Mérida Initiative, a bilateral agreement made in 2007. Concurrent with the increased funding to the drug war, though, homicides and other violent crimes have only increased. “We are actually making an investment not in our security, but in our insecurity,” says Snapp.

The end of the drug war would mean the United States could choose to withhold aid, Ordorika says. Still, she sees it as an issue of international sovereignty: “To what point does the neighboring country have the right to insert itself to the degree that the main problem comes from a policy implemented and financed by the neighboring country?”

At the end of March, the displaced people from Guerrero finally came to an agreement with the Mexican government to return to their state. For the time being, they can’t return to their homes, and the government didn’t fulfill their demands for resettlement, but they’ve been temporarily housed in a municipal auditorium in the town of Chichihualco. As with the end of the drug war, it remains to be seen how the government will fulfill its promises for protection: whether it will fulfill the ideal of addressing abuses from the root, or whether it will merely reproduce the abuses of the past.