Though August is supposed to be slow for news, the young month has already seen two extraordinary events. Both have largely flown under the radar, but each has important implications for United States national security—and together they expose a deep flaw in US foreign-policy strategy: a reliance on repressive and autocratic Persian Gulf states in the name of fighting terrorism.

First, the Associated Press released an in-depth investigation into Saudi Arabia and the United Arab Emirates’ relationship in Yemen with Al Qaeda in the Arabian Peninsula (AQAP)—the branch experts believe poses the most credible threat to Americans at home. The AP found that, for years, Saudi Arabia and the UAE’s alleged “counterterrorism” strategy has been to directly aid AQAP’s resurgence by cutting deals with fighters—paying some to relocate, and recruiting other Al Qaeda operatives into the Saudi-led coalition’s separate fight against the Houthi rebels in Yemen’s civil war. Unsurprisingly, as the investigation reveals, these deals are not helping to combat Al Qaeda, instead making the United States Al Qaeda’s de facto ally (and air force) in Yemen.

In a second piece of news, Saudi Arabia expelled Canada’s ambassador, suspended new trade ties, canceled state airline flights to Canada, and directed 16,000 Saudi students in Canada to seek education elsewhere. All this because Canada criticized Saudi Arabia’s recent jailings of human-rights activists. The over-the-top backlash didn’t stop there—a Saudi pro-government Twitter account then proceeded to tweet out an infographic (since deleted) of a Canadian jetliner flying toward the Toronto skyline, with a seemingly menacing suggestion that Canada’s comment on Saudi Arabia’s internal affairs could have dire consequences. “He who interferes with what doesn’t concern him finds what doesn’t please him,” read the tweet, referencing what it said was an Arabic saying. 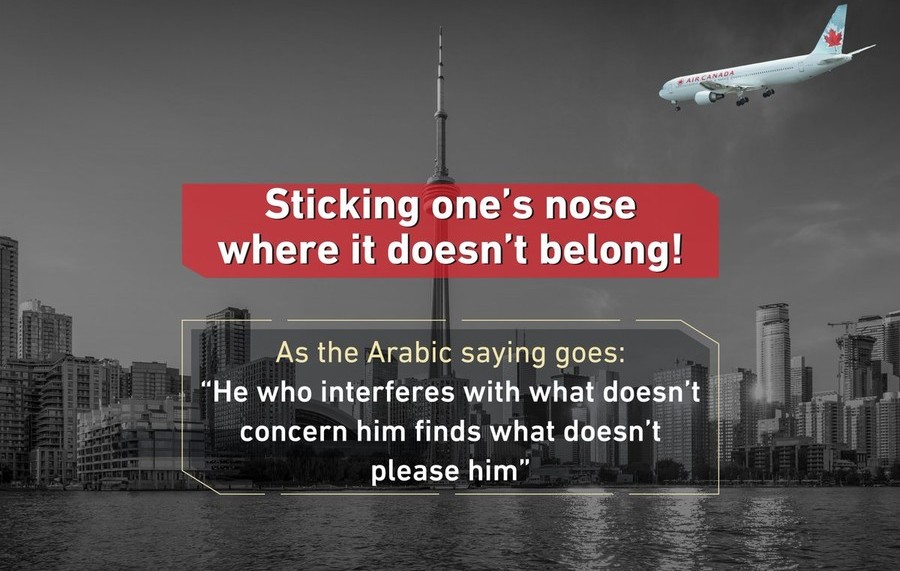 Neither of these developments sparked a public backlash from the US State Department. Nor was there much heard from foreign-policy wonks, think-tank analysts, or media pundits in Washington—many of whom are funded by the UAE, Saudi Arabia, and other wealthy Gulf nations. There might have been snickers on social media, but these events provoked no noticeable debate about how unconditional “friendships” with these countries could lead the United States into policy decisions that make it and the world less safe.

Instead, continued US support for the massacre and man-made famine in Yemen is conducted in the name of “supporting our Gulf partners” against an Iranian menace, an image that has been created by Washington think tank–written op-eds and Gulf-funded K Street lobbyists. What’s more, the countries that had been pushing the United States to kill the Iran nuclear deal—Saudi Arabia, the UAE, and, perhaps most openly, Israel—having succeeded in getting Trump to do it, are now pounding the drums louder than ever for direct conflict with Iran.

Proponents of maintaining an unquestioning alliance with the Gulf will say the United States needs to look the other way because these states help the country fight terrorism. But using countries like the Kingdom of Saudi Arabia and the United Arab Emirates as the first line of defense against this nation’s perceived threats runs counter to US national-security interests, and worse, contrary to American values.

Indeed, so many Washington pundits and establishment politicians on both sides of the aisle are so fearful of losing these “friends” in the fight against terrorism that they willfully ignore blatant evidence that these countries’ policies actively undermine their own stated security interests and subvert the rationale for why America supposedly needs these countries as partners in the first place.

And so the self-fulfilling prophecy carries on: The United States provides arms, holds honor cordons, and offers unquestioning fealty to Gulf governments—all in the name of security—while making itself complicit in abuses that fuel the security challenges it says it seeks to address. The groupthink has become so corrosive to Washington’s foreign policy-making apparatus that nothing seems to shock or sway it into a deep rethinking of whom to consider allies or how the US engages with the world.

This month’s events should make clear that the endless impunity for the Gulf states—and America’s blind faith in their “friendship”—must be reexamined. Washington cannot continue with business as usual, oblivious to how a captured foreign policy creates problems for the United States abroad, and at home.