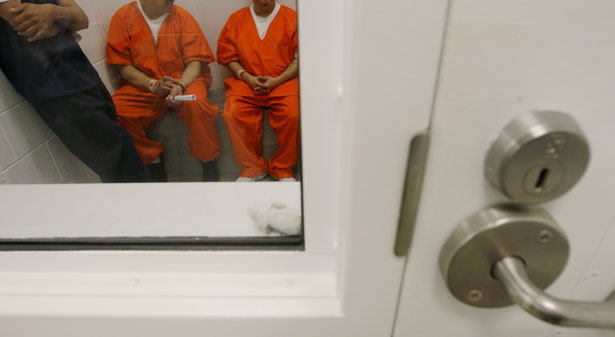 Detainees inside a holding cell at the Northwest Detention Center in Tacoma, Washington. The facility houses people whose immigration status is in question or who are waiting for deportation or deportation hearings. (AP Photo/Ted S. Warren)

The Correction Corporation of America, or the CCA, is trying to revamp its brand. Its main business is detention; the company, the largest private corrections company in the United States, owns and manages fifty-two facilities, fourteen of which house immigrants. But the company has developed a bad reputation in the field and has been the subject of multiple lawsuits alleging excessive use of violence by wardens, understaffing, and Medicaid fraud. According to Detention Watch, several CCA-run immigration facilities are among the worst in the country and ought to be shuttered immediately. As a result, Governor C.L. “Butch” Otter of Idaho announced last week that the state would take over the CCA detention center in Orofino, perhaps the company’s most notorious facility.

So CCA is diversifying. The company has lobbied for enforcement-heavy immigration reform in order to ensure that its detention services will remain a necessary, and lucrative, enterprise. But it is also investing in alternative detention. In August, CCA acquired Correctional Alternatives, Inc, a private company that coordinates parole services for both federal and state enforcment agencies. CAI offers rehabilitation classes, supervision and even aural acupuncture to those recently released from custody, known in the industry as a “community corrections” firm. “This acquisition enables us to provide a range of solutions from incarceration through release, supporting our belief in helping inmates successfully transition to society, which is important to both our business and our communities,” Damon Hininger, president of CCA, said in a statement following the acquisition. If DHS decides to decriminalize immigration, tracking violators through non-custodial programs, CCA will benefit, too.

On its website, CCA bills itself as a service organization, referring to its employees as “life changers” (“Become a life changer!”) and featuring blogs with messages about perseverance, redemption and work-life balance—“Have you ever felt stressed because you felt there was just not enough of you to go around?” One author recommends that readers “schedule activities that help you unwind, even if it’s for just an hour each week.” The tone of the CCA blogs is as falsely optimistic as the machinated voice on the subway who says to look out for mysterious packages and “have a nice day.” The company even has a new motto, a “revised vision” as it says on the website: “PRIDE: Professionalism, Respect, Integrity, Duty and Excellence.” What they mean to say is that CCA might be kicked out of Orofino, but they’re not going anywhere.